Rouen, France: a day trip to Normandy from Paris

Posted on March 6, 2020 by travelbynatasha 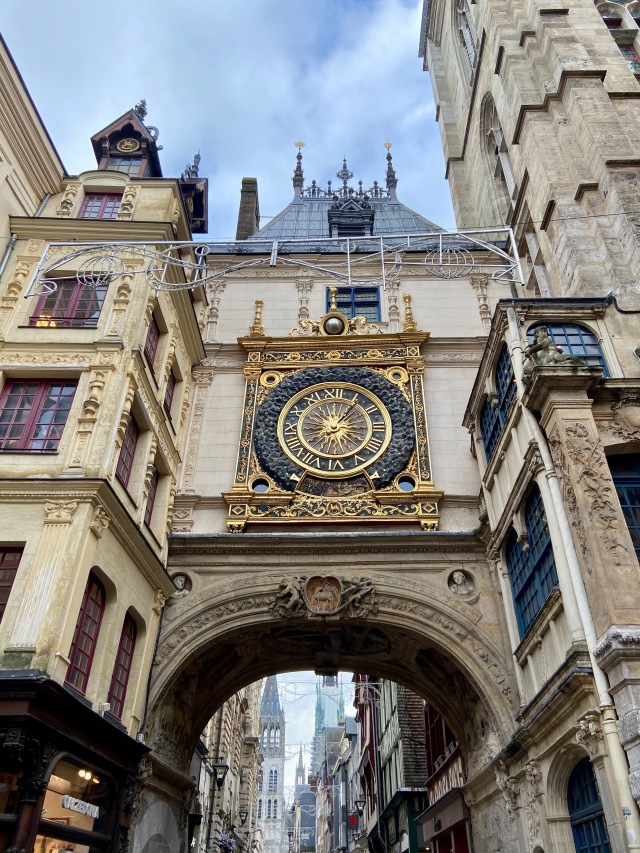 Although there is a transportation strike going on in Paris, there are a very limited number of Metro lines and some train routes in operation.  Our concierge at the Maison Astor got us roundtrip tickets to Rouen from Paris Gare Saint-Lazare; the train station is within walking distance of our hotel.  After breakfast, for left for the station a little early since the train schedule is infrequent and we don’t want to miss our departure. 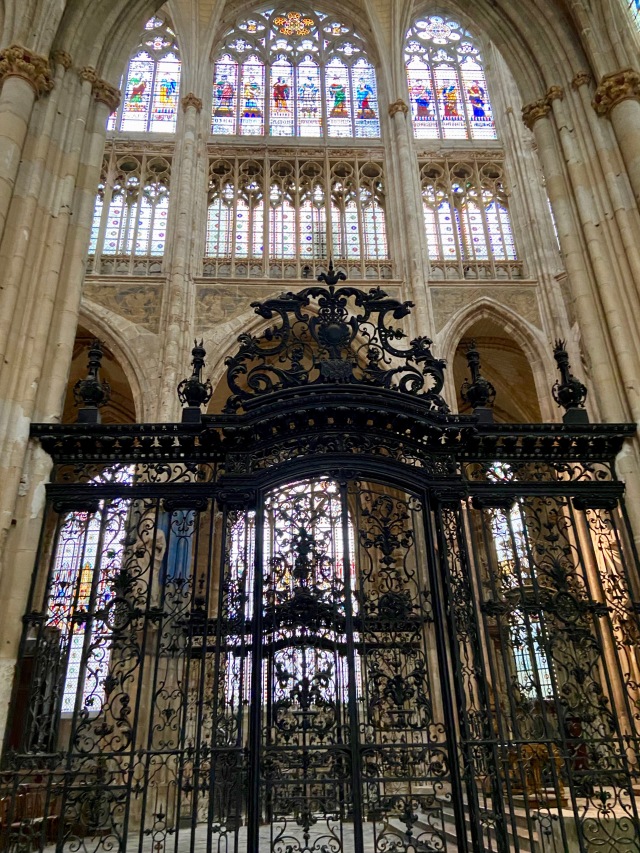 Gare Saint-Lazare is a big station, but it was relatively empty given the strike.  Actually, there were very few people on the train too.  The concierge put us in first class, so that might be the reason.  It was a scenic ride. 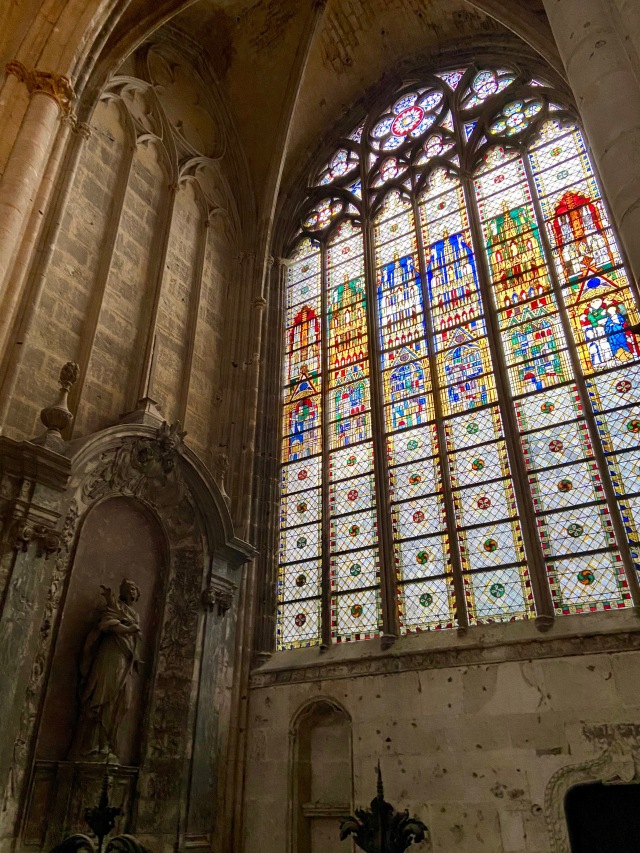 Rouen is in the Normandy region of France, a region we have visited before.  We have visited Normandy both as a day trip from Paris (like today) and once by cruise ship.  There was very little signage in English when we arrived at the Rouen station.  We thought there was a tourist office right in the train station, but we had misunderstood the concierge and the visitor center is actually in the town center.  The gift shop in the station unfortunately did not have a guide book in English but the shop worker directed us out of the station and straight down the hill into town.  As we got closer, there was plenty of signage.

Photo ©Jean Janssen. We always try to spot the McDonald’s when we are traveling. They are good for a clean, free toilet. The McDonald’s in Rouen, France has a half-timbered facade. 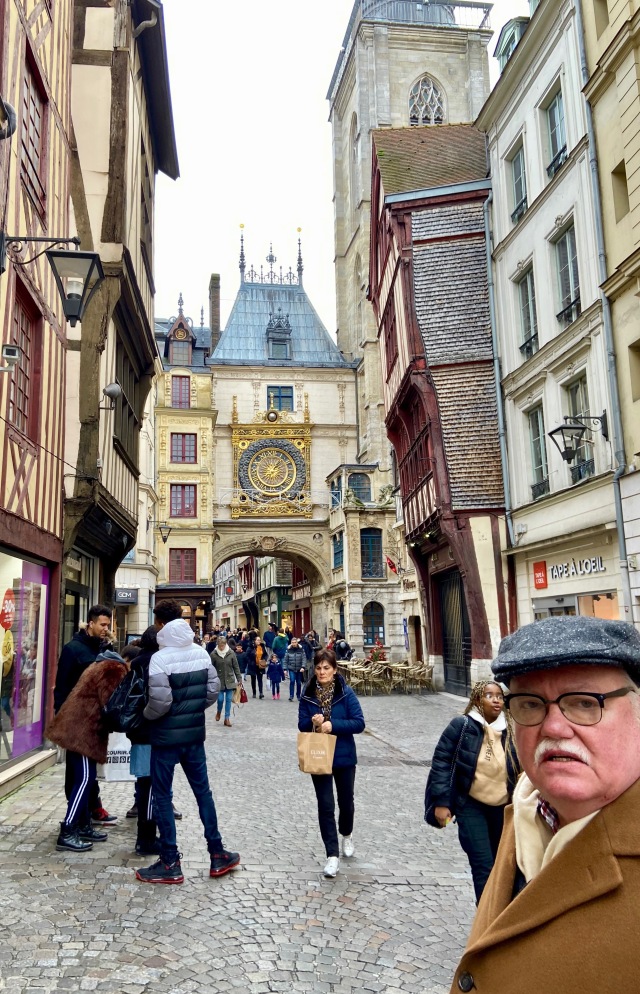 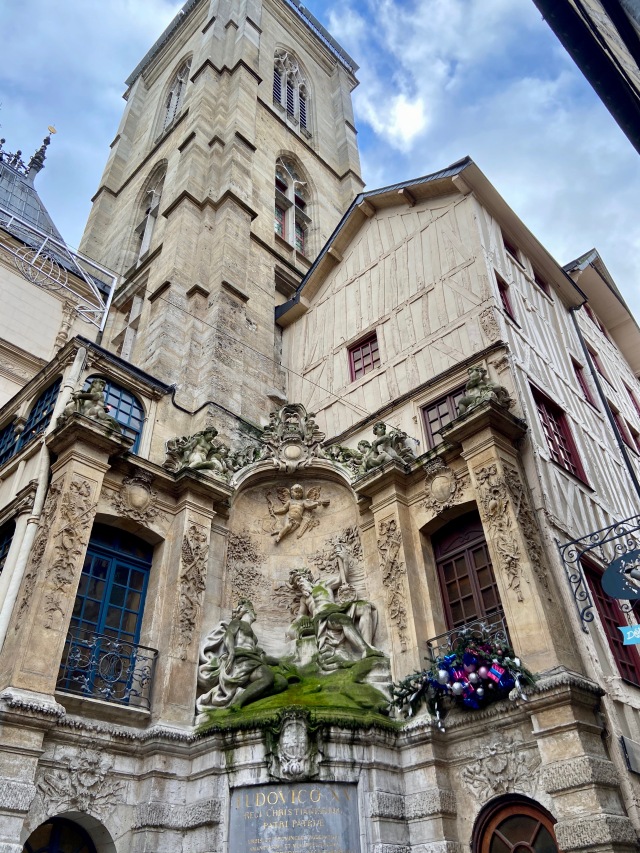 On the main street, there were half-timbered houses, now shops, mixed in with modern constuction.  Even McDonald’s had a medieval facade.  Mickey D’s may seem a strange landmark choice to mention.  However, McDonald’s are always good for a clean restroom (often on an upper floor) so I keep a look out for them. At the intersection, we turned the opposite direction toward the Cathedral and walked through the fabulous Tour du Gros-Horloge, the big clock Tower.

Photo ©Jean Janssen. The underside of the arch of the Tour du Gros-Horloge, Rouen, France.

Rouen is a city with so many fabulous churches.  There were once also wonderful convents and abbeys as well.  I love history and also read a lot of historical fiction.  I read a wonderful series set in a convent in medieval Rouen.  Since then, I have always wanted to see this city.  Another claim to fame is that it the place where Saint Joan of Arc was tried, convicted, and then burned at the stake for heresy. 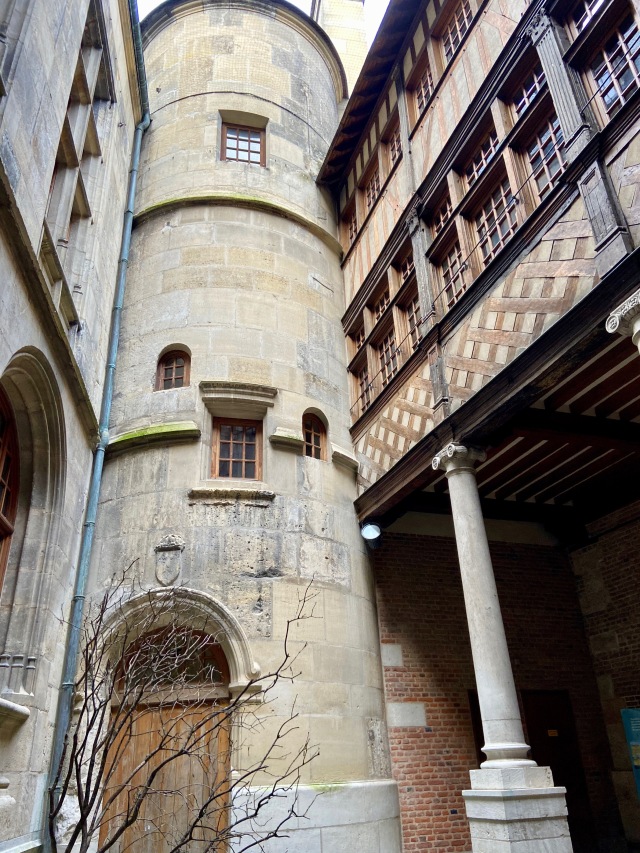 Photo ©Jean Janssen. The Rouen tourist office is in the oldest surviving Renaissance monument in the city. 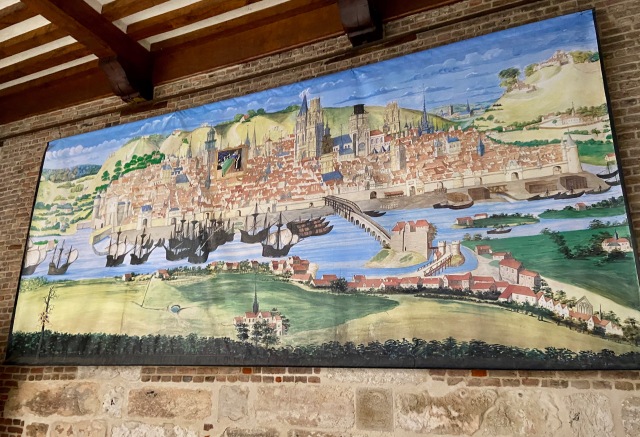 Unfortunately, when we got to the city center the Visitor’s Center was closed for a break, as was the Cathedral.  I did do a little searching on my phone.  If I hadn’t been in a food coma yesterday from Vefour I might have done some internet research in anticipation of our day in Rouen.  Since we really need a guidebook or at least a map to tour the city, we just wandered through the medieval streets a bit and then Boris decided he wanted a crepe.  For me, the Cozy Cat will always be the “cat restaurant”.  Cat pictures were everywhere (even bright pink cat wallpaper in the bathroom) and there were numerous live cats lounging around.  I lost my appetite and just watched Boris eat. 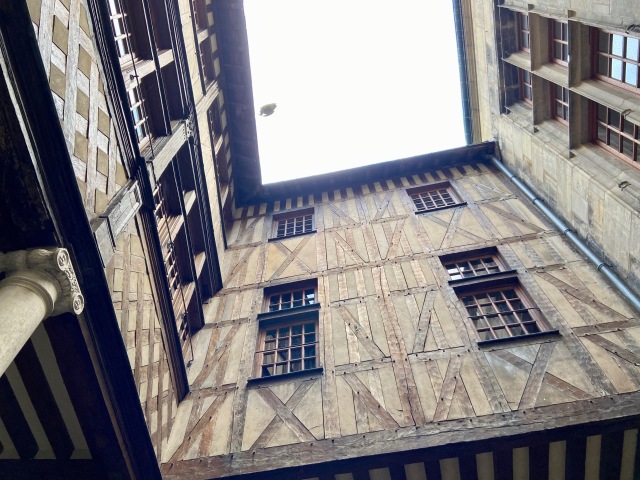 Photo ©Jean Janssen. The Rouen tourist office is in the oldest surviving Renaissance monument in the city.

Photo ©Jean Janssen. Art created by the elements, tiles in the courtyard of the Rouen tourist office.

When Boris had finished his lunch, the Visitor’s Center was open and we got a guidebook and a map inside.  The building is the oldest surviving Renaissance monument in Rouen.  The building itself is worth a visit.  I spent the time before the Cathedral opened mapping out the visit of Rouen in the limited time we had left and taking pictures of the Cathedral facade.  We can’t miss the train back; not sure when there will be another one. 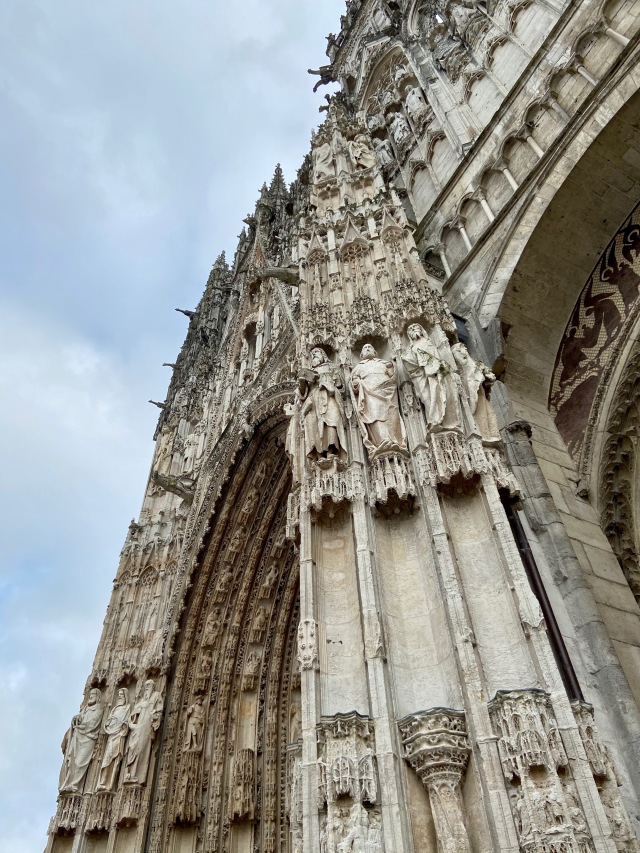 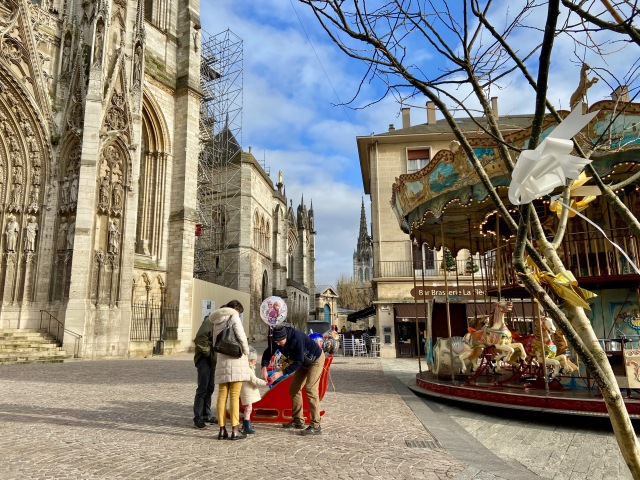 Photo ©Jean Janssen. A child getting a ballon to celebrate the day just outside the Cathedrale Notre-Dame de Rouen.

When the Cathedral opened we went right inside.  This is one of four churches where we had the opportunity to tour the interior during our visit to the city.  For me, touring churches just doesn’t get old.  I enjoy spotting the similarities and differences and of course, I love taking pictures.  This day was particularly special; suddenly I was in the stories I had read. 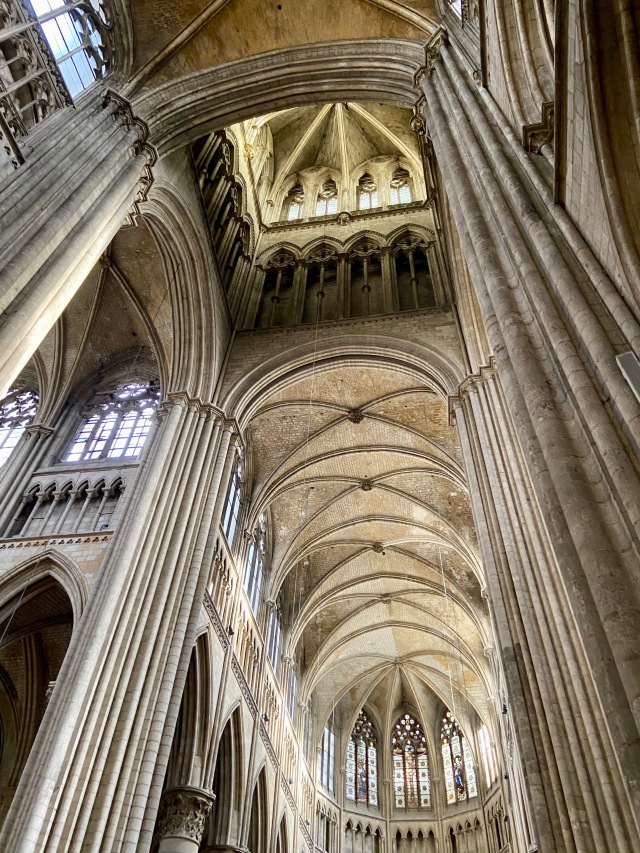 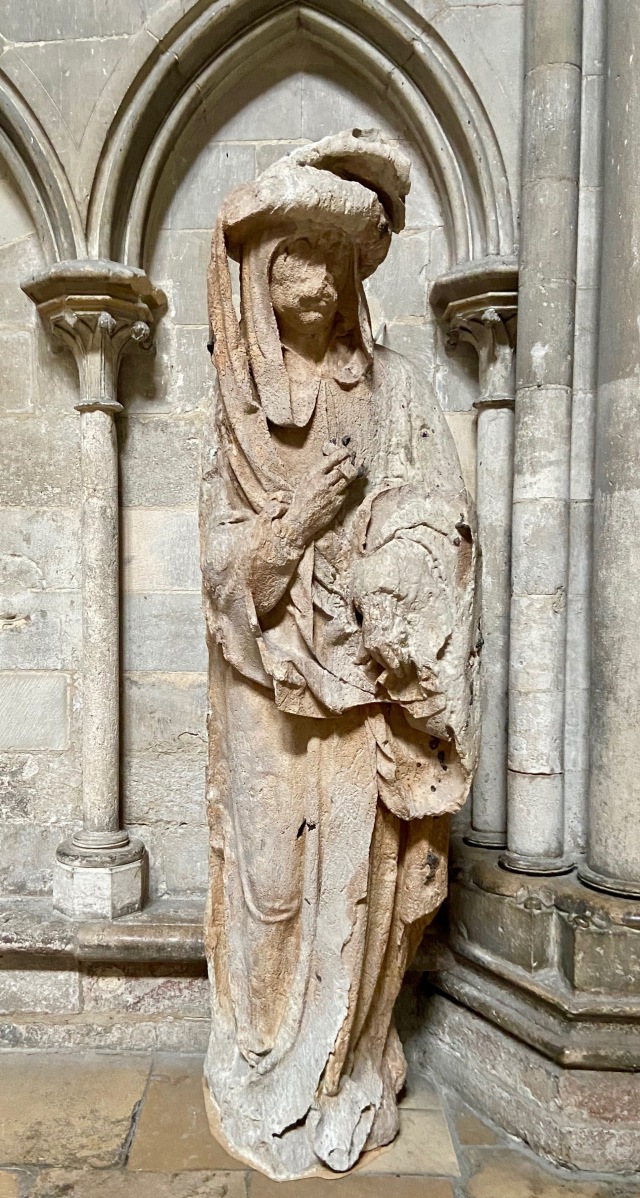 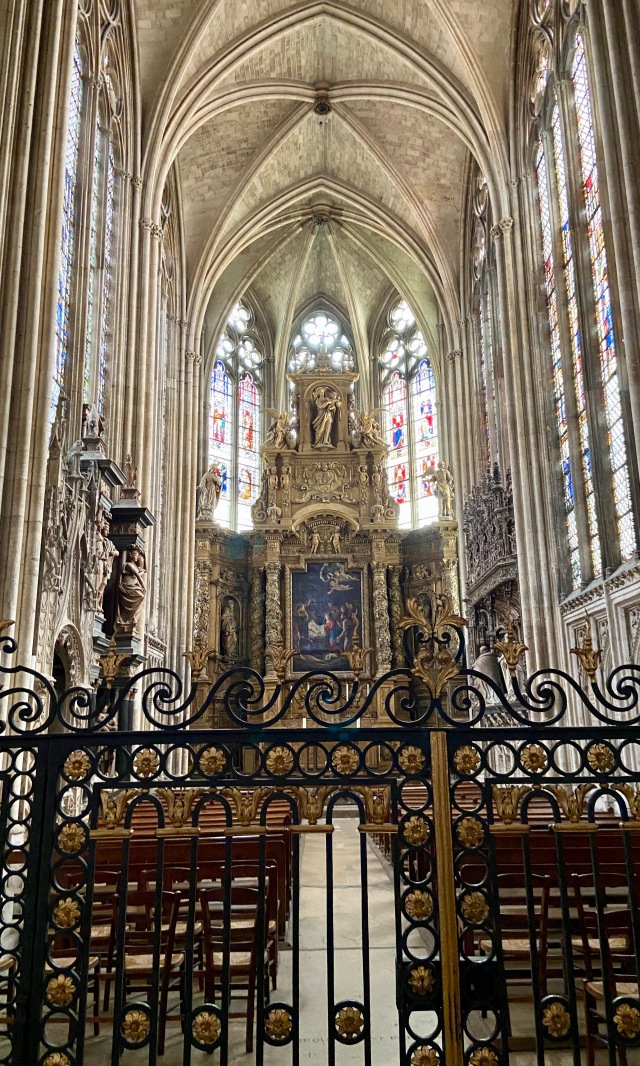 Leaving the Cathedral we walked back down the medieval street and under the arch of the Big Clock tower and past McDonald’s.  We are headed to the Place du Vieux-March, the ancient market square where Joan of Arc was burned at the stake.  Like at the Cathedral, there was a Christmas Market set up here.  The stalls were no longer open, but the market buildings were still in place.  Some of the children’s rides were still operating.

Today the spot where the Saint was burned in 1431 is marked with a tall cross.  Next to it sits a very modern church, Eglise Jeanne d’Arc.  Saint Joan of Arc Church was completed in 1979.  The beauty of the church is in the wonderful stained-glass windows that were saved from the 16th Century Church of Saint Vincent that was destroyed in 1944 during WWII.  The windows had been removed and hidden and therefore survived the war.  You can still see the ruins of St. Vincent’s just outside the entry to the modern church.

Photo ©Jean Janssen. The cross at the Place du vieux-March marks the spot where Joan of Arc was burned at the stake in 1431. Rouen, France. 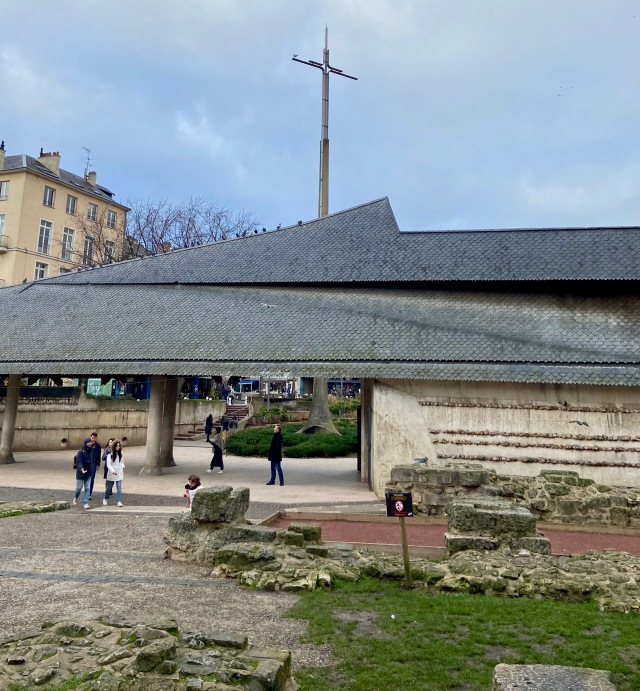 Photo ©Jean Janssen. Eglise Jeanne d’Arc, Saint Joan of Arc church, in Rouen, France. In the foreground are the ruins of Saint Vincent Church destroyed in 1944 during WWII.

Photo ©Jean Janssen. Beautiful stained glass in the St. Joan of Arc Church in Rouen, France. The stained-glass was saved from the St. Vincent church that was destroyed during WWII.

After our visit to the Place du vieux March, we backtracked toward the Cathedral (making the all important McDonald’s “necessary” stop), with a mind to see some of Rouen’s other beautiful churches.  Along the way, we did a little window shopping in the city’s medieval buildings.

Photo ©Jean Janssen. Side view of Rouen’s Cathedral surrounded by the charming medieval streets with their wonderful shops. 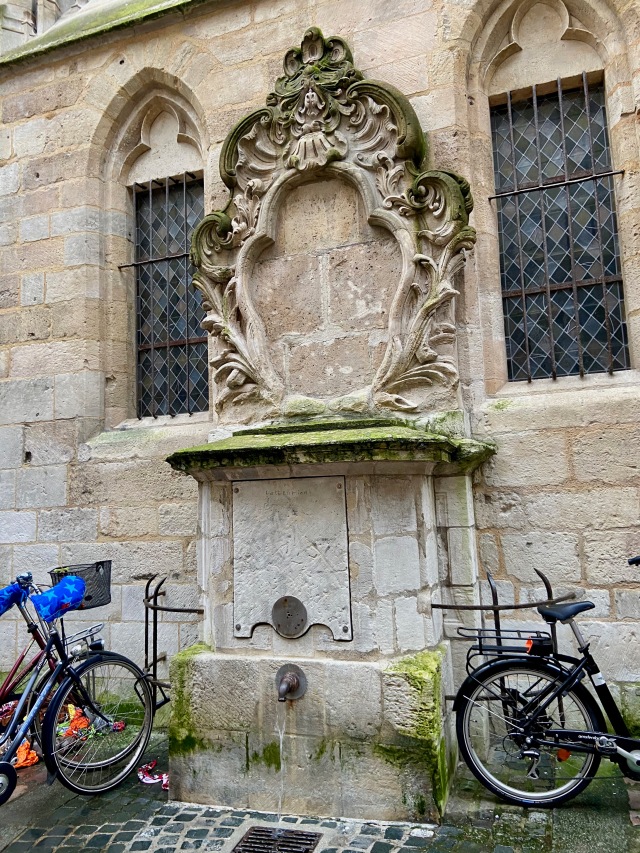 Set among the Norman half-timbered houses is the Flamboyant Gothic Eglise Saint-Maciou.  When originally built by the Dukes of Norman, it was in one of the busiest parts of the city. “When part of the sanctuary collapsed in the 13th century it was decided to rebuild the church. The construction work was led by Pierre Robin between 1436 and 1517.”Copyright © French Moments Ltd.  The church was closed during the French Revolution from 1793-1802 and became a weapons factory.  It was severely damaged during WWII and has been restored numberous times. 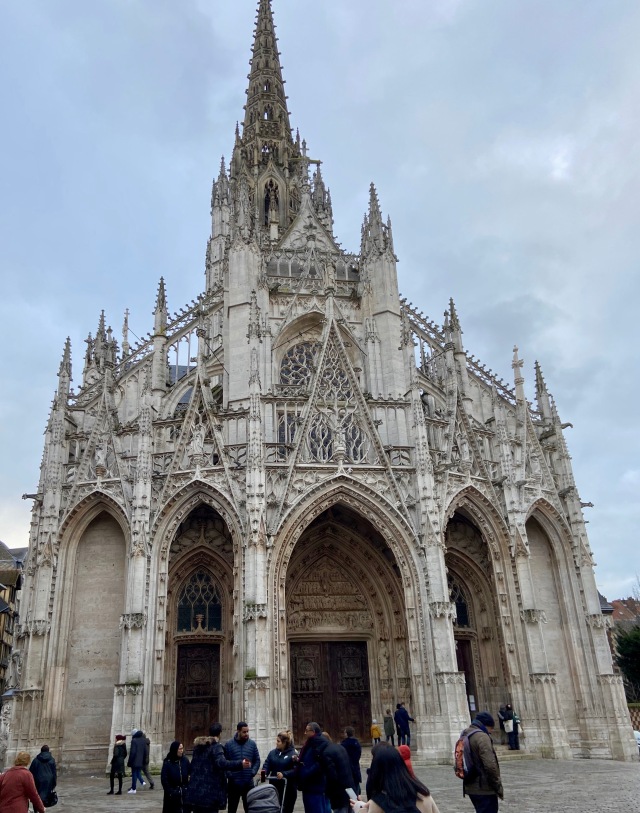 Photo ©Jean Janssen The flamboyant Gothic Eglise Saint-Maclou in Rouen, France. The lantern tower is centered with the church spire.

Photo ©Jean Janssen. This spiral staircase going to the organ case was relocated from within the church. Eglise Saint-Maclou, Rouen, France 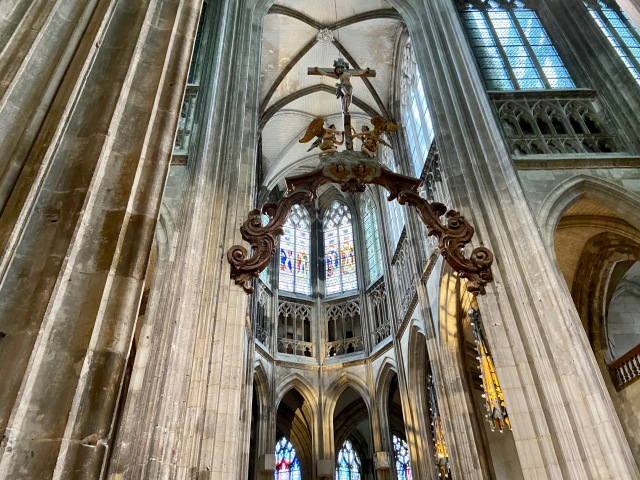 Photo ©Jean Janssen. For me the most striking feature of the interior of Eglise Saint-Maciou was the “arch of glory” over the altar.

As we followed our route back in the direction of the train station, we came to the Abbatiale Saint-Ouen, just next to the Hotel de Ville (city hall).  The Abbey church was built for the Benedictine Order.  Perhaps the most notable feature of the church is its organ built by Aristide Cvaille-Coll, considered the great organ-builder of the 19th century.  It is a “large four-manual pipe organ…notable for its unusually powerful 32′ Contre Bombarde. The organ stands unaltered and thus is one of the few of the master’s works to speak with its original voice.” 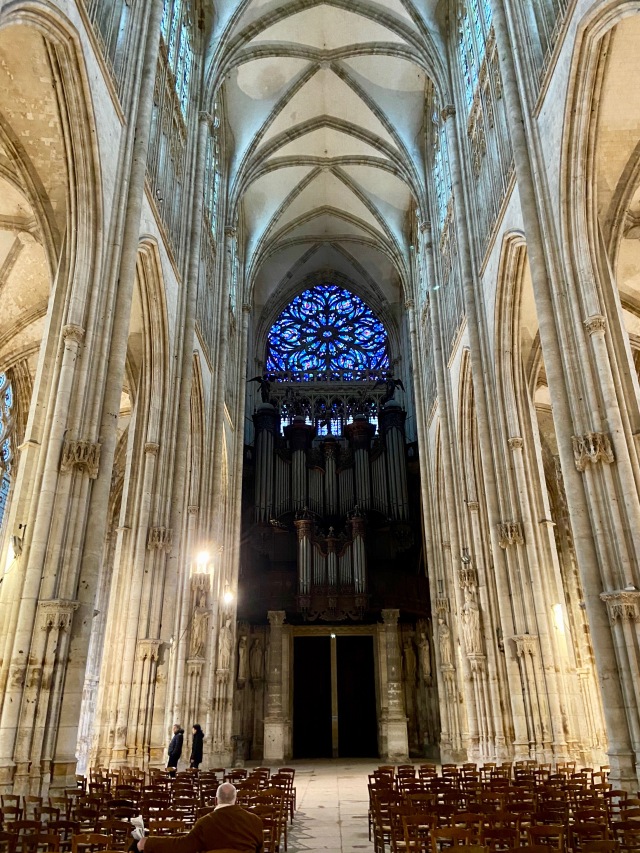 As to the church’s exterior, “[t]he real beauty is the chevet (eastern side) with typical High Gothic flying buttresses and pinnacles. Note how the radiating chapels of the ambulatory have their own individual roofs.”  This is the visitor’s entrance to the church after you pass through the iron gates.  The top of the church tower does not have the lantern common in Gothic design, but has instead an octagonal crown called the “Crown of Normandy” or the “Ducal Crown of Normandy”. 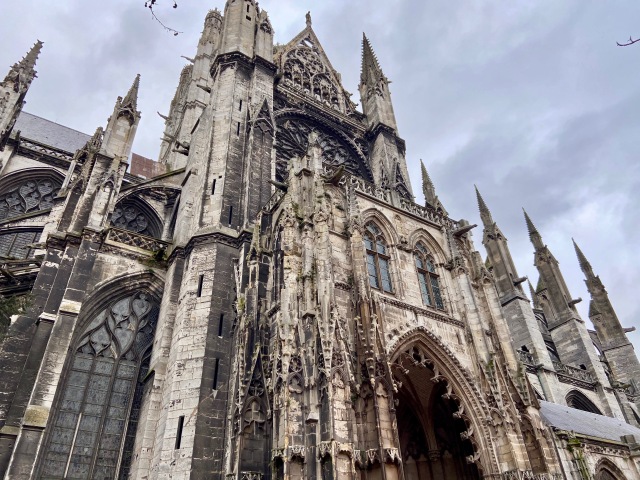 Photo ©Jean Janssen. The eastern side-visitors-entrance to the Abbey Church of St. Owen in Rouen, France.

Leaving Abbatiale Saint Ouen, we were stopped for a while due to the protest at the Hotel de Ville and wandered down a side street passing other churches that had been converted to different uses-often museums or concert halls.  We were no longer in the medieval section of the city.  We also passed by the Musee de Beaux-Arts, yet another attraction in the city we didn’t have time to go through. 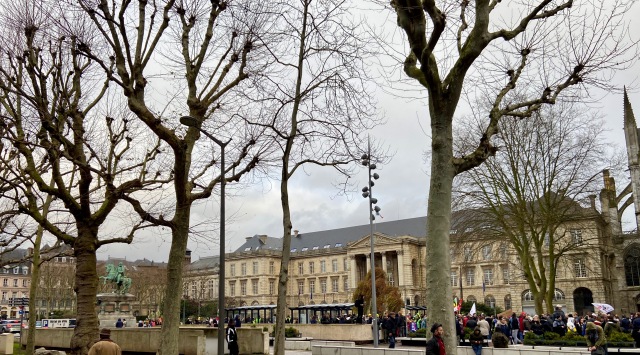 We did stop for a drink before our train departure at a bar just outside the station.  The setting was right out of an old movie.  My favorite moment was when an older couple came in and took what was probably “their seat”.  They didn’t even have to say anything to the bartender.  He made their creme brulees and brought them right to the table.  I suspect this is a Saturday (or perhaps daily) ritual for the couple. 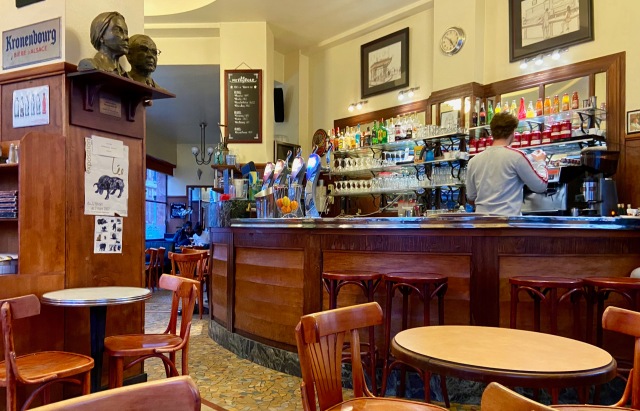 Photo ©Jean Janssen. Boris contemplates his visit to Rouen, France. The pink bottle on the table is for a French sparkling water. I love the bottles. On my last trip they had the Eiffel Tower on them; this visit is the Arc of Triumph. I brought a few home and use them as Valentines Day decorations.

I enjoyed our day trip to Rouen.  The trip back to Paris was quick and uneventful.  I rested a bit.  We stopped at one of the restaurants near St. Augustin’s on the way back to the hotel.  Only one from full day in Paris before we return home.  –Natasha

I am a retired attorney who loves to travel. Several years ago I began working on a Century Club membership achieved by traveling to 100 "foreign" countries. Today, at 49 years of age the count is at 82. Many were visited on land based trips. Some were cruise ports. Some were dive sites. Most have been fascinating.
View all posts by travelbynatasha →
This entry was posted in international and tagged Abbey of Saint Ouen, Addatiale Saint-Ouen, Cathedrale Notre-Dame de Rouen, Eglise Jeanne d'Arc, Eglise Saint Maclou, France, Notre-Dame de Rouen, Place du Vieux March, Rouen, Rouen Cathedral, Saint Maclou Church, St. Joan of Arc Church, Tour du Gros-Horloge. Bookmark the permalink.