Posted on September 4, 2019 by travelbynatasha 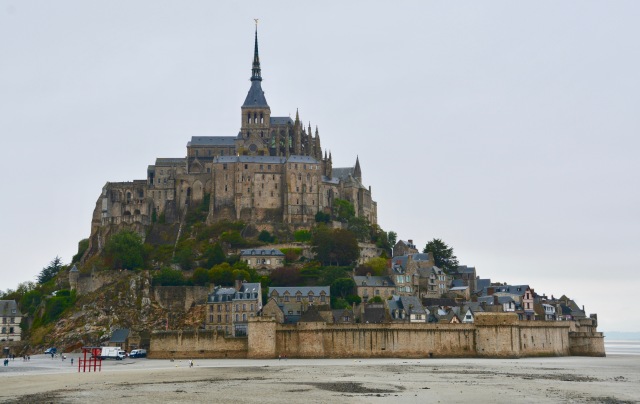 Today we are anchored off the walled city of St. Malo, Brittany.  Brittany is one of fifteen regions in France.  However, the main attraction on today’s stop is actually in Normandy, another region of France.  But for the flow of Couesnon River, the rocky tidal island of Mont Saint Michel would be in Brittany. 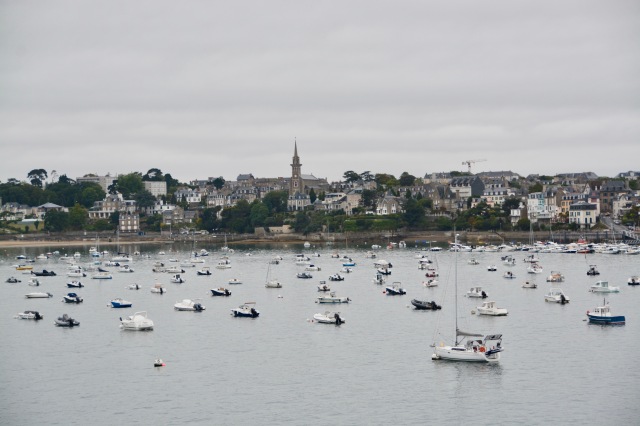 Photo ©Jean Janssen. The harbor at St. Malo, Brittany, France. When I woke, this was in darkness with only the lights from the town and the boats making the scene visible. By the time breakfast had arrived in our cabin, this was our view.

Boris and I are traveling by cruise ship once again.  We left Southhampton yesterday after a direct flight into Heathrow from Houston and a bus transfer to the coast.  It was an hour of driving around to all the terminals at Heathrow to pick up other cruise passengers and then an hour and 15 drive to the cruise terminal.  We took a red eye flight, so we were early and had to wait about an hour for the ship to open for new passengers.  Boris and I were the first ones on after the guests with suites. 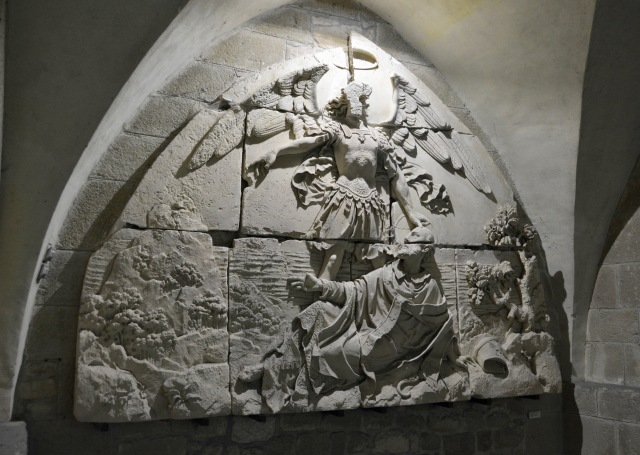 Our original plan was to go to Vietnam and Thailand in October but we had to cancel because Boris has a firm trial setting.  Those destinations are on my bucket list and we hope to get there in the spring.  This replacement cruise was the only one that fit in our schedules for the end of summer/fall. Billed a Wine and Romance Cruise, we will be stopping in ports in France and Spain before docking in Portugal.  Once we are land based, we will take a few days to see Porto which we missed when we were last here in May.

Our first stop in St. Malo, France, a port city in the English Channel in the region of Brittany.  Historically, it was the home of French privateers (pirates sanctioned by the monarchy).  St. Malo’s old city is walled.  It has been destroyed twice.  First during the 16th century and then again during WWII when German troops were garrisoned in Saint Malo.  The city was heavily bombed by the Allies.

Photo ©Jean Janssen. One of the entrance gates to the walled port city of St. Malo, France.

We hope to have time to visit the city when we return from our excursion.  It was predicted to be a beautiful sunny day and our group all headed out to the tenders without raincoats or umbrellas.  We are unable to dock at St. Malo, so we have to tender in to shore through an opening in the walled harbor.  About half way into our tender ride, the rain started coming down heavily.  There was no time to go back for coats or umbrellas. 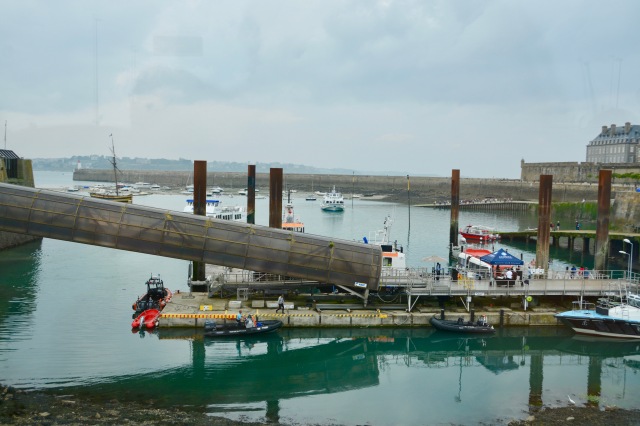 It was only a light drizzle by the time we reached the dock so we made it to the bus without mishap.  Our destination is Mont Saint Michel just on the border of the regions of Brittany and Normandy, about an hour away.  This is a spectacular world heritage site that is not to be missed.  The climb to the Abbey at the top is supposed to be grueling, but I have been told by anyone that has gone that it is worth the attempt.  Post surgery I can do pretty well with flat walking.  Uphill is a different situation.  Houston has no hills; so injury or not, I am not conditioned for climbing.

Mont Saint Michel is an island just over half a mile off the mainland coast.  The River Couesnon forms an estuary at Mont Saint Michel.  The final stretch of the river “forms the border between the historical duchies of Normandy and Brittany.”   The first monastic settlement was built on Mont Saint Michel in the 8th century;  the Romanesque church was built in the 11th century.  When the Abbey was built, pilgrims could only cross at low tide.  Water wasn’t the only hazard; the quicksand surrounding the mont still claims lives today.  The water level varies widely with the tides, as much as 46 feet.  The tides made the island “defensible as an incoming tide stranded, drove off, or drowned would-be assailants”.

Photo ©Jean Janssen. The new light bridge over the bay has a wooden boardwalk for pedestrians and a road for shuttle access.

Crossing to the island has changed over the years.  There was a tidal causeway and then in 1879 a raised causeway was built with the later addition of car parks.  More recently, a dam has been created along with a light bridge which allows the water to pass freely around the island.  The causeway has been eliminated and the car parks have been moved to the mainland.  Today you can walk to the island or take a free electric shuttle.  There is a charge for the horse-drawn shuttle.  Some still brave the sandy marshland, but should only do so with a guide to get them around the quicksand.  The light bridge flooded once in 2015 as the result of a “super tide”. 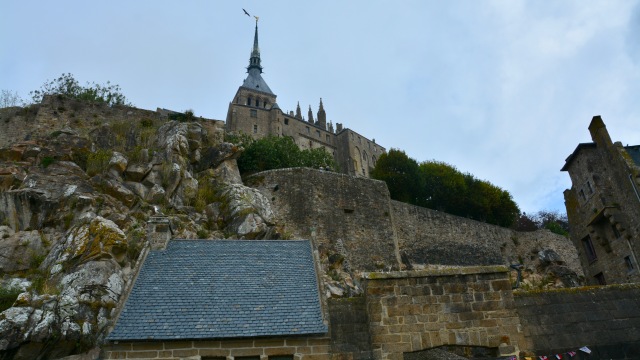 “According to a legend, the archangel Michael appeared in 708 to Bishop Aubert of Avranches and instructed him to build a church on the rocky islet.”  The Abbey which sits at the top was one of great prestige until the Reformation reduced both the number of pilgrims visiting and the number of monks in residence.  With the French Revolution, the remaining monks were forced to flee and the Abbey was stripped of it ornamentation and became a prison.  “[B]y 1836, influential figures, including Victor Hugo, had launched a campaign to restore what was seen as a national architectural treasure. The prison was finally closed in 1863 and the mount was declared a historic monument in 1874.” The Mont and the surrounding bay were named UNESCO World Heritage Sites in 1979. 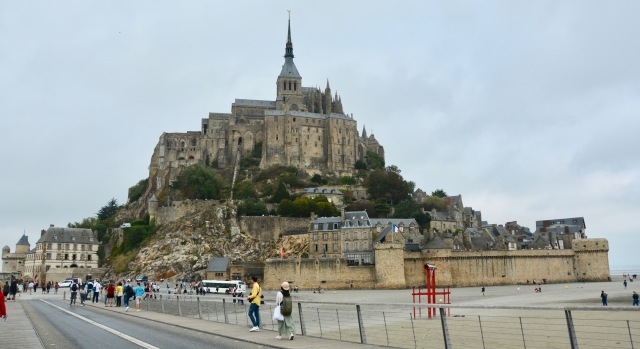 The mont and its Abbey are visually dramatic.  The best view is from a distance, which you speed by while on the shuttle.  If you have the time and the energy, walk the wooden path toward the island to see this almost unparalleled site.  If you are on the shuttle, you will still be left off some distance away and can enjoy the view. 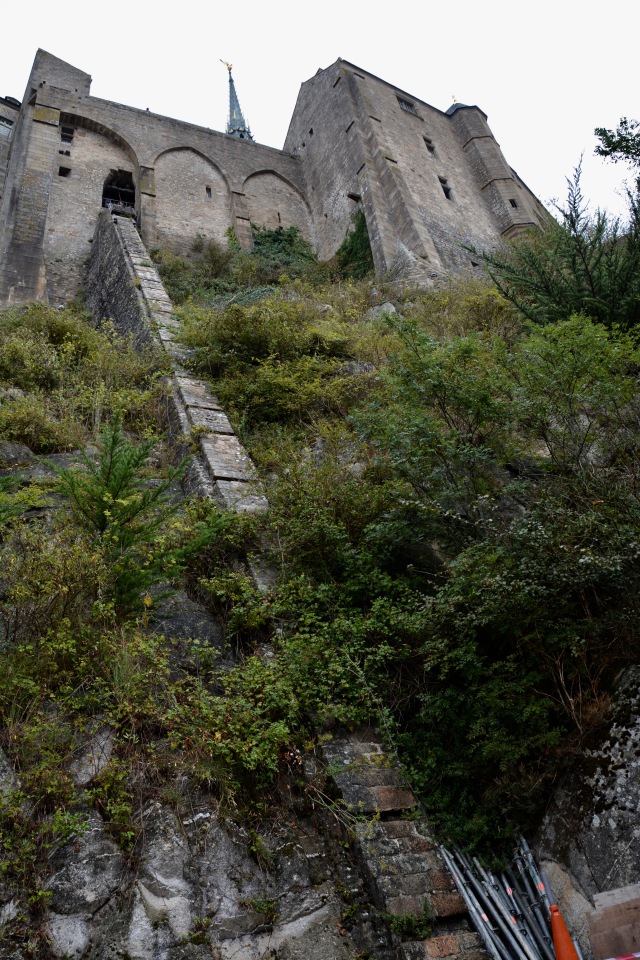 Photo ©Jean Janssen. The old pulley system used to raise and lower items to/from the Abbey is still in use today. Sure wish it was me they were pulling up. 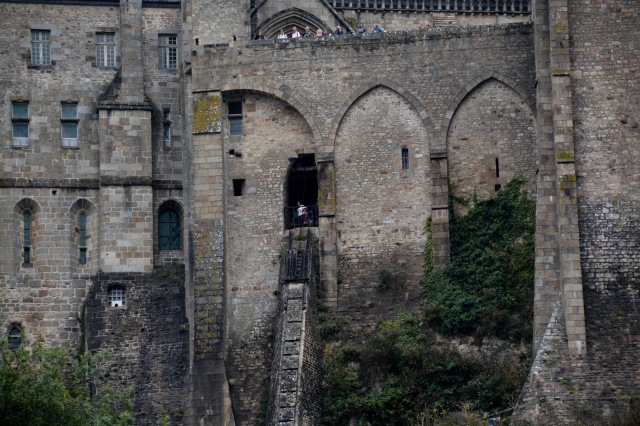 Photo ©Jean Janssen. Top of the pulley system at the Abbey at Mont Saint Michel. Our guide lead us up what she said was the easiest path.  Easiest being a relative term.  It is a difficult climb up a less than smooth pathway with rock, cobblestones, and steps.  The young and fit will most likely have no problem, but I recommended some conditioning if you are not in the best of shape.  I had to stop a few times to rest and catch my breath.  The guide was sensitive to the needs of our group.  There were some people who simply couldn’t do it.  The cruise line had given us warnings about the difficulty. 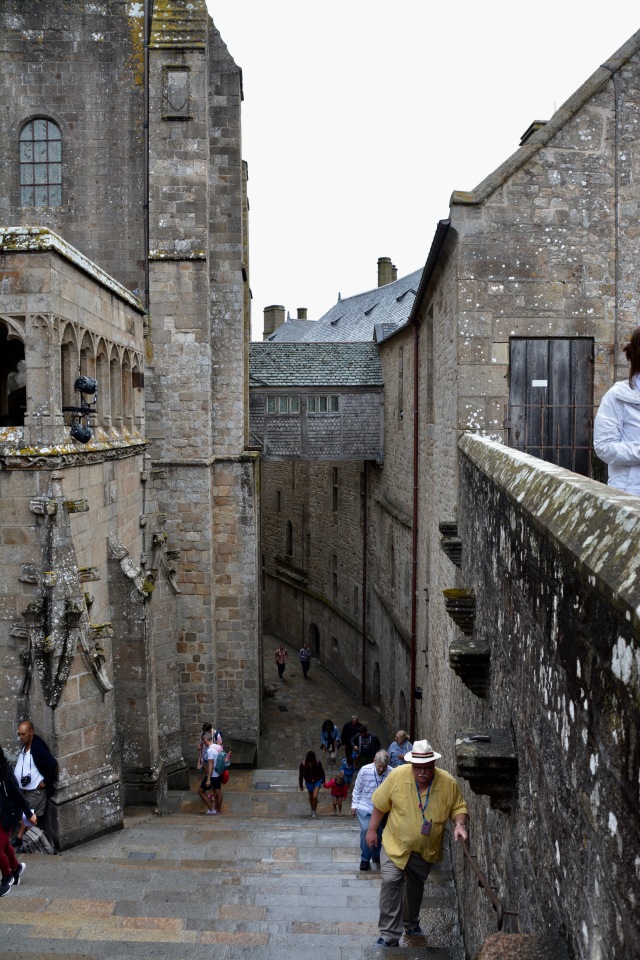 Photo ©Jean Janssen. Boris made the trek up to and through the Abbey with me.

Don’t be fooled once you make it to the Abbey.  It may be easier, but is not easy to make your way through the structure.  To tour, you will still be going up and down steps and ramps and utilizing straight and circular staircases. 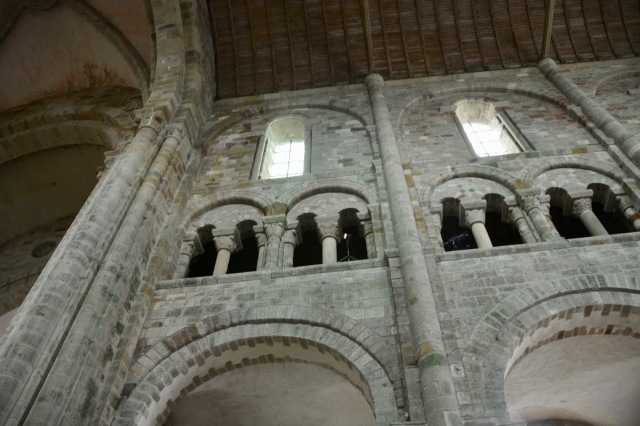 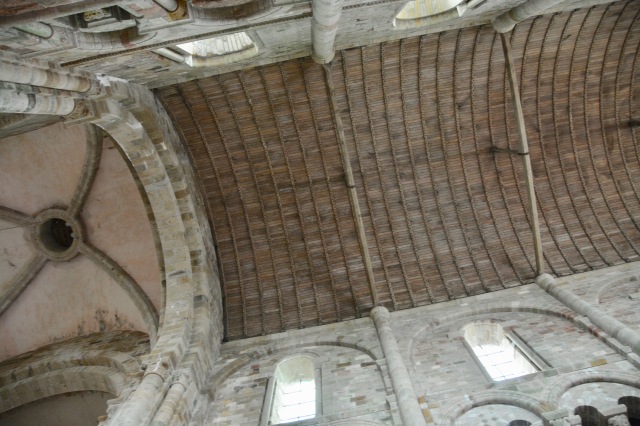 Photo ©Jean Janssen. The roof of the Abbey church was designed to minimize weight and pressure on the lower floors of the structure.

The Abbey church features both Romanesque and Gothic styles of architecture.  It has a wooden, almost straw-like ceiling to reduce the weight on the lower floors.  The top of the church spire features a statute of Michel the Archangel.  In March 2016, a helicopter was used to temporarily remove the golden statue on the spire in order to restore its lightning rod device.  A model inside the Abbey recreates the procedure. 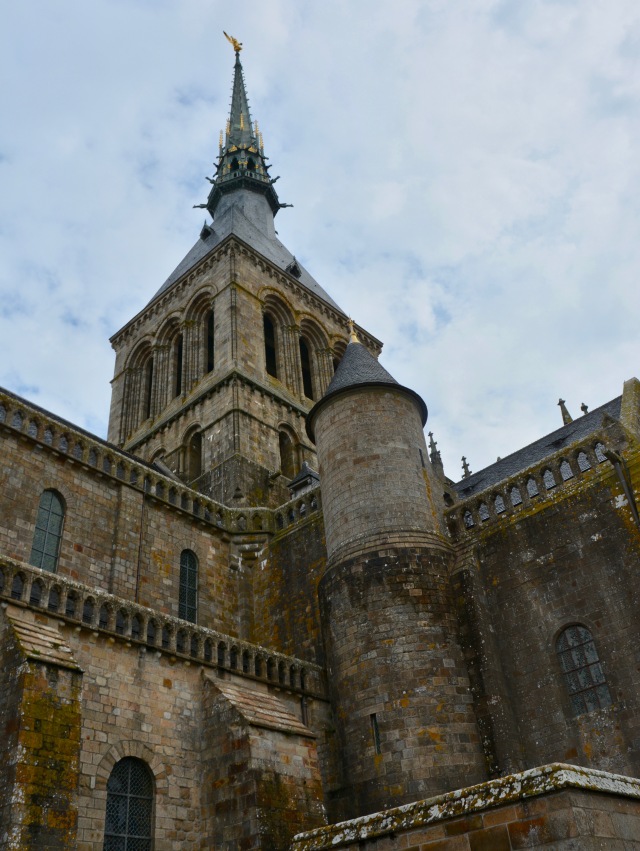 Photo ©Jean Janssen. The golden statute of Archangel Michel was restored by helicopter in 2016

Leaving the church, you walk into the Abbey cloister.  There were views of the garden and the bay from the cloister.  This cloister didn’t have the same wow for me after visiting the Monastery of Saint Mary of the Victory in Batalha, Portugal in May. 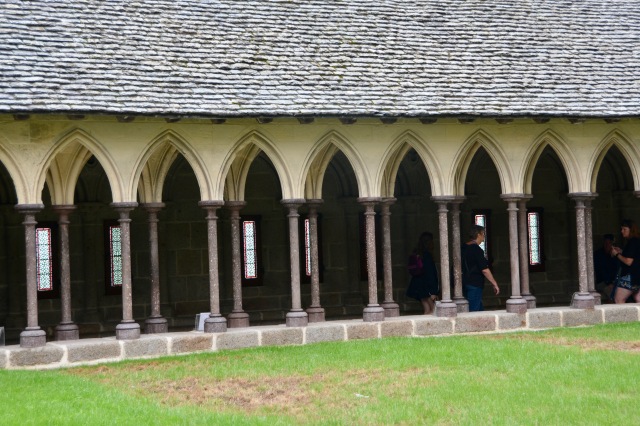 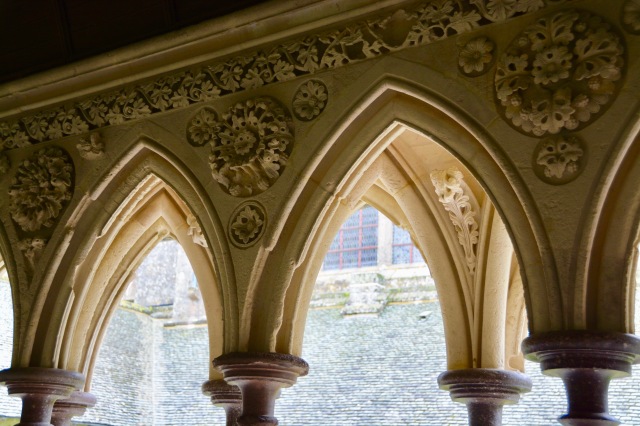 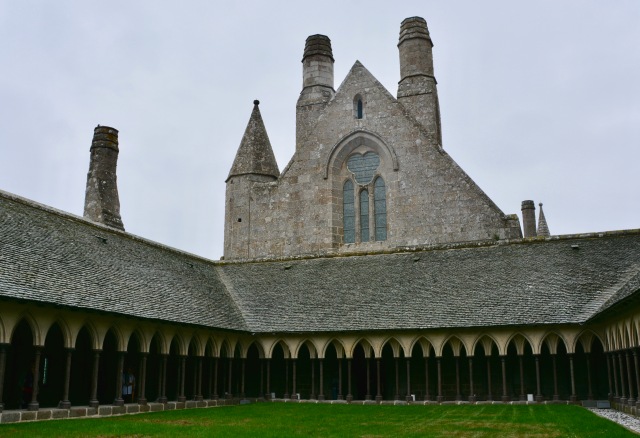 Photo ©Jean Janssen. The cloister and church at the Abbey at Mont Saint Michel.

The Abbey has several levels.  God dominates the top level, next came the clergy, then the noblemen, than the rest of the population.  The distinction in amenities was not as clear with all the decoration removed. We walked through the gardens on our way out of the Abbey.  We descended the Mont from the Abbey via the town.  Throngs on tourists were on the pathway, either due to the later hour or the popularity of this route.  It felt a little like our experience in Obidos.  None of the shops caught our interest enough to go inside and actually our tour time was so limited that there really wasn’t much time to do anything other than walk down. 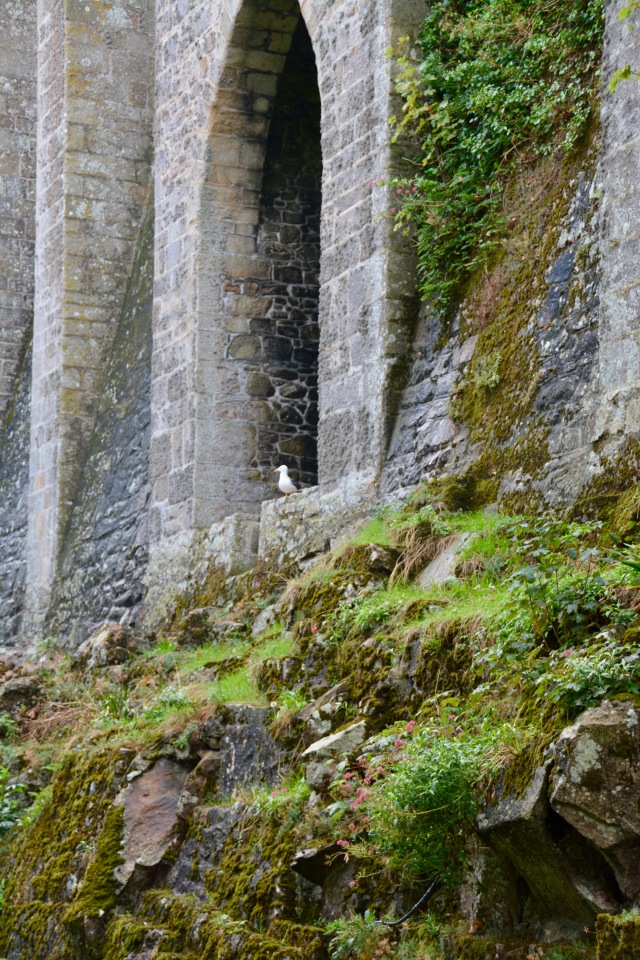 Photo ©Jean Janssen. Perched in the niche of the Abbey Walls of Mont Saint Michel. 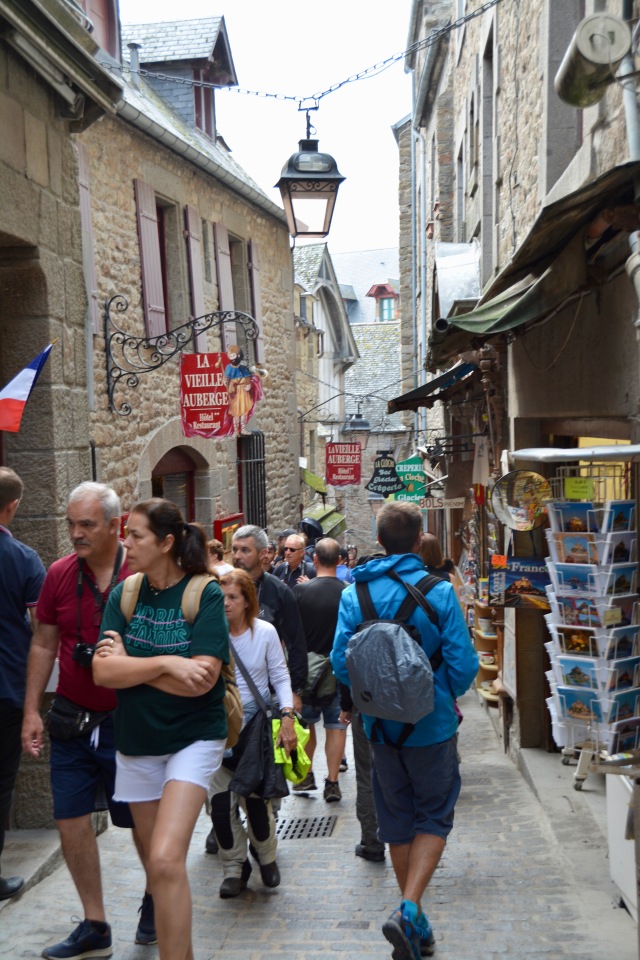 Photo ©Jean Janssen. I saw this in a alleyway as we descended Mont Saint Michel through the town. It almost looked like a mini drawbridge to me.

I did enjoy the facades of the buildings and particularly the iron signs.  At one inn/restaurant, two cooks beat batter (presumably for crepes) in time against their metal bowls and attracted quite a crowd. Photo ©Jean Janssen. Cooks beat their metal bowls in rhythm attracting a crowd of on-lookers, while my camera decided to focus on the iron rooster in the foreground instead. 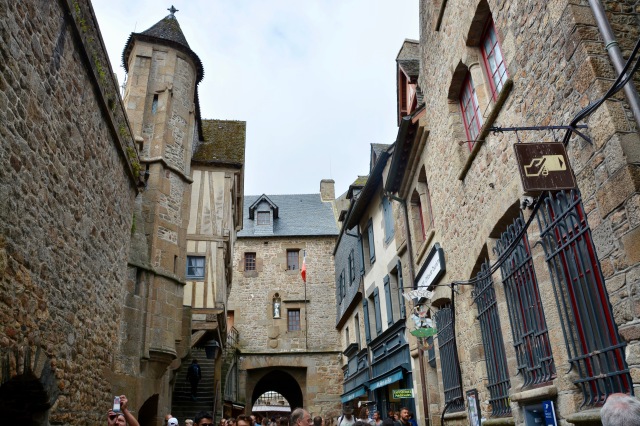 We made it to the bottom and I snapped a few more pictures before we returned to the boardwalk to wait for the shuttle.  I was pretty hot, tired, and wet.  Wet not from rain but the exertion.  Of course, I was pretty proud of myself and glad I didn’t let anyone talk me out of trying.  Ideally, I would have gotten a picture from a greater distance, but I honestly didn’t have the energy or the time.  The guide told us it was a least an hour to get back on foot and I would have missed the bus. 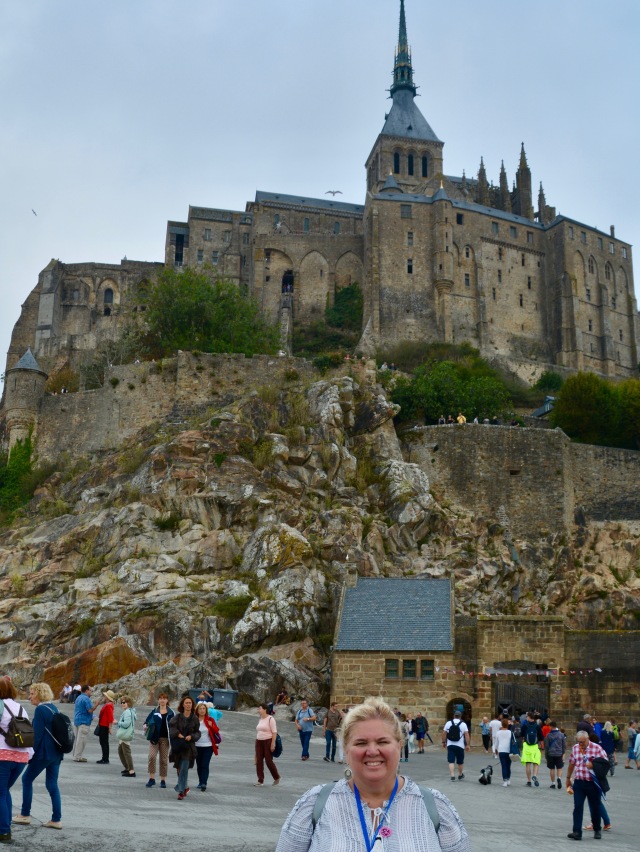 I did it! Natasha climbed and descended Mont Saint Michel. 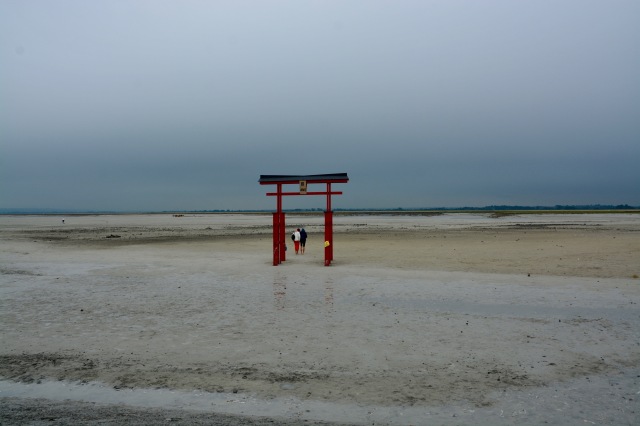 Photo ©Jean Janssen. In the silt at Mont Saint Michel.

Returning to St. Malo, we drove around the walled city from the opposite direction, giving us a nice view of the beach and the fortress out in the bay.

When we got off the bus it was not raining and it was a reasonable walk to the city gate, but we were tired and hungry and wanted more than the two hours remaining before the last tender to explore.  We decided to save the old city of St. Malo for our next visit.

We went to a very late lunch when we reached the ship and then (no surprise) took naps.  As we left our spot at anchor outside the walled harbor, I enjoyed taking in the coastline, the beautiful hotels and homes, and the charming beaches.  St. Malo is definitely worth another visit.  On to more of Brittany with a stop at Belle Isle tomorrow. 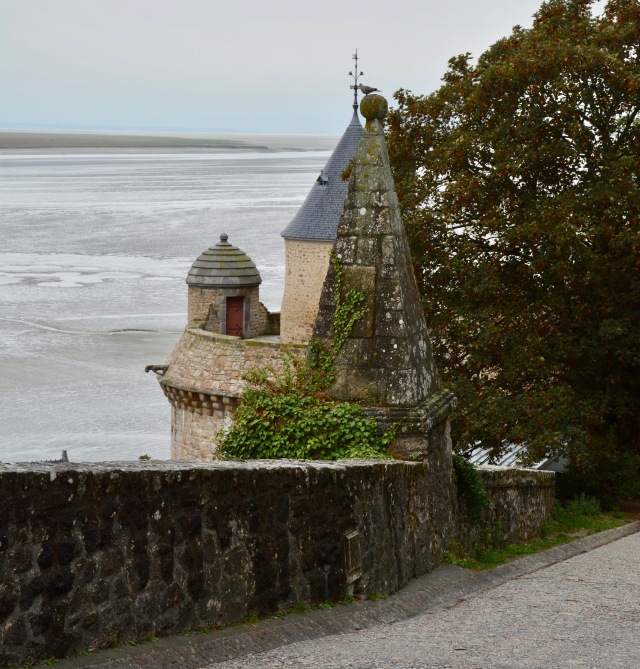 Photo ©Jean Janssen. View of the Bay as we ascended Mont Saint Michel. 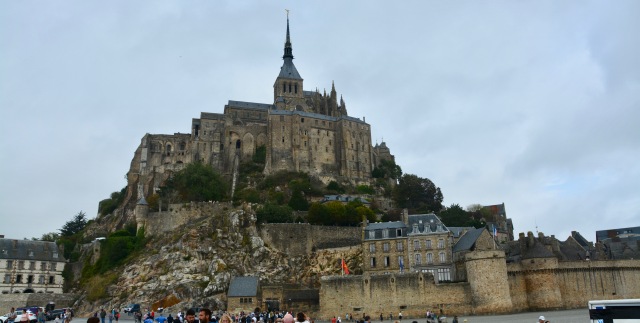 I am a retired attorney who loves to travel. Several years ago I began working on a Century Club membership achieved by traveling to 100 "foreign" countries. Today, at 49 years of age the count is at 82. Many were visited on land based trips. Some were cruise ports. Some were dive sites. Most have been fascinating.
View all posts by travelbynatasha →
This entry was posted in cruises, international and tagged Brittany, France, Mont Saint Michel, Normandy, St. Malo. Bookmark the permalink.