Posted on March 4, 2020 by travelbynatasha 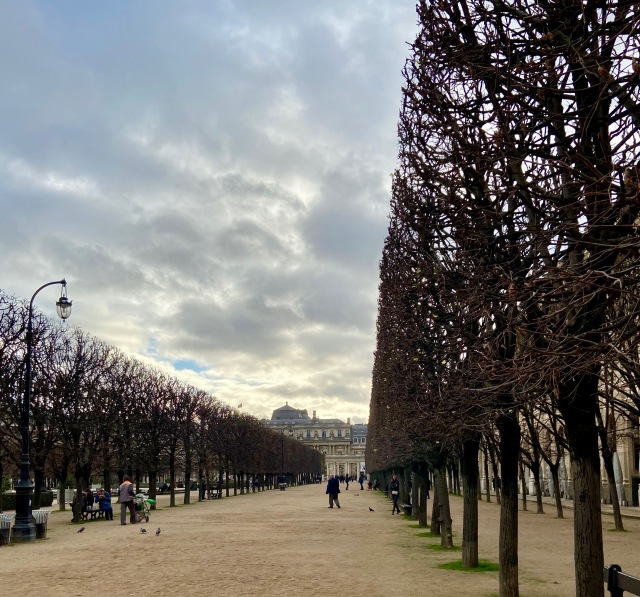 After our day-long tour of the champagne region yesterday, we are staying in the city for the day.  We did some more walking, but today’s highlight is lunch at La Grande Vefour.  Boris loves to try the historic, famous, and (unfortunately) expensive restaurants of Paris.  So much for an economy trip with a room on points and flights on miles.  Apparently the budget is going to food and champagne.  But I really shouldn’t complain…

We were the first to arrive at the restaurant with a noon reservation.  We got the power corner seat with a view of the windows out on the gardens of the Palais Royal.  The restaurant, first opened in 1784, sits along the palace colonnade.  It was a cold, cloudy day, but light came in through the unfrosted upper windows. 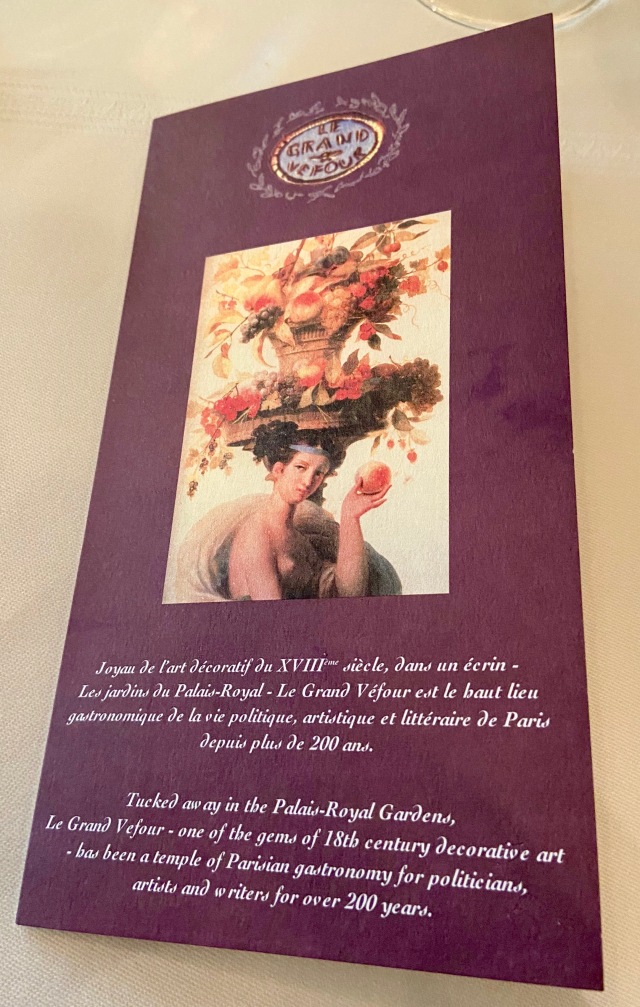 From the Restaurant’s website:  “[It was] at the end of the 18th century that French cooking reached its peak in the aristocratic households, where luxury and refinement were absolute rules…The Palais Royal, replacing le Marais, became the central attraction of Parisian life and, most importantly, the birthplace of French Cooking…As soon as the building of the pavilions was over, in 1784, Aubertot opened a café with the café de Chartres sign.”

Photo ©Jean Janssen. Colonnade sign of Le Grand Vefour. Palais Royal, Paris.  Some of the signage is from the original restaurant opened on this site in 1784.

“Situated the length of the Joinville colonnade, linked with the rue de Beaujolais, the restaurant opens on the gardens of the Palais Royal through three arches. The sign “Café de Chartres”, on the façade opposite the garden, bears the name of the establishment that was there before le Grand Véfour. A name chosen to honour the duke of Chartres, first son of Louis d’Orléans, the one who created the domain of the Palais Royal, and father of the soon-to-be Philippe Egalité, last owner of the Palais before the Revolution.”

When you enter the restaurant, you’re taken two hundred years back in time! Embellished with delicate carved panelling with Louis XVI style garlands, the entrance gives access to two different rooms; on the walls, mirrors share the space with famous glass-protected paintings.” 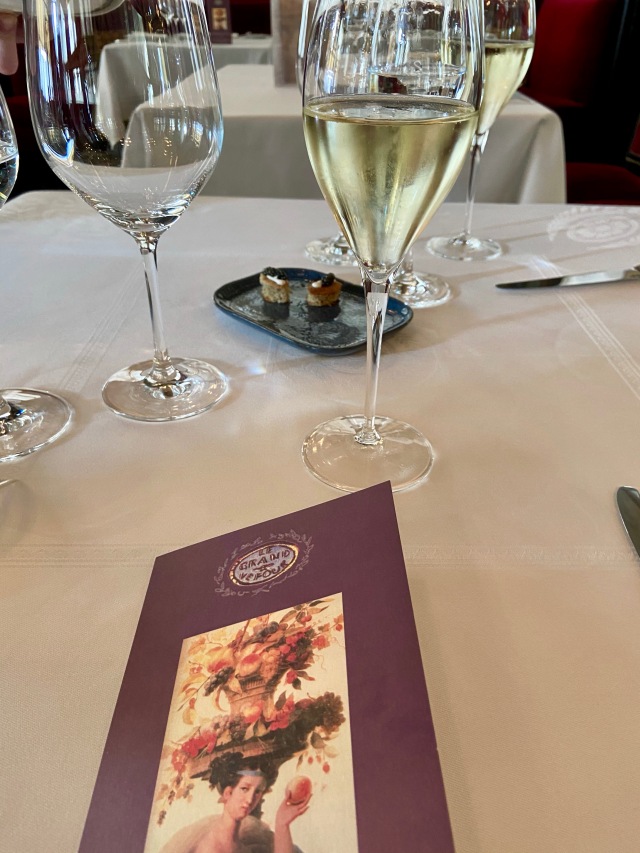 It really is a marvelous restaurant.  Of course we started with a glass of champagne only to follow it with a bottle.  We had at least 18 different servers during the course of our meal with so many courses that I lost count.   You might think I am kidding, but we had five dessert courses alone.  There was also a cheese course with at least 40 selections to choose from.  The food was amazing, artistic, and life-changing.  Who knew eating mushroom soup could be a religious experience? 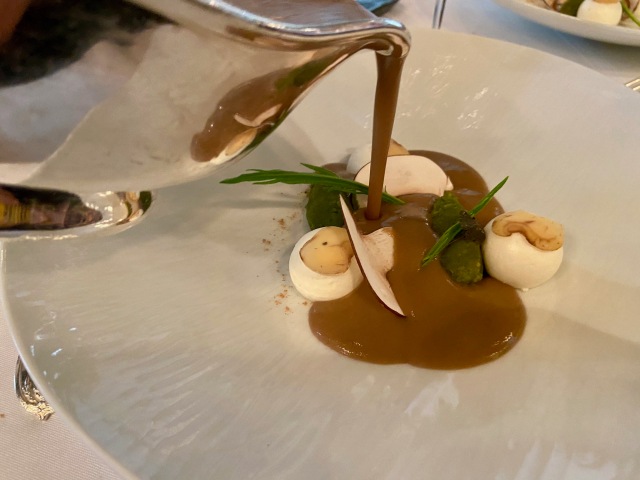 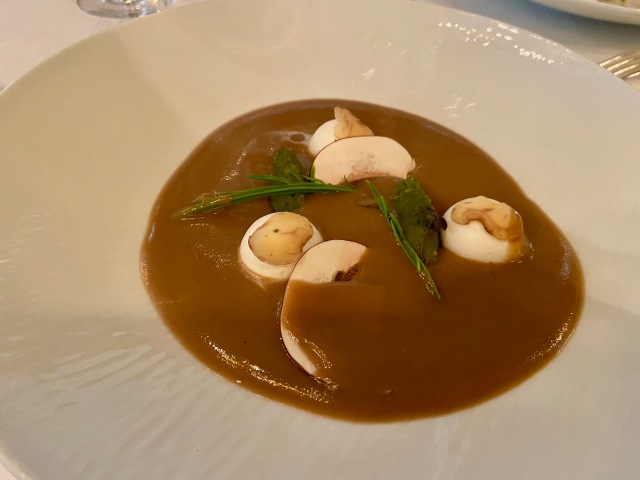 Not bad people watching either.  The small restaurant of two rooms was full by the time we finished.  (There is also a banquet room upstairs near the toilets.)  There were French, Russian, American, Australian, and British customers within earshot of our table.  One couple, on a trip just before the birth of their first child, came in honor of his parents who had dined there.

Yes, it is a “blow the budget” meal, but lunch made the tab more reasonable.  You are also there for hours.  Its about so much more than the food; its the experience.  By the time we left it was late afternoon and we were full, buzzed, and happy.  The more recent history is a little tainted, but I highly recommend the food, service, and the experience. 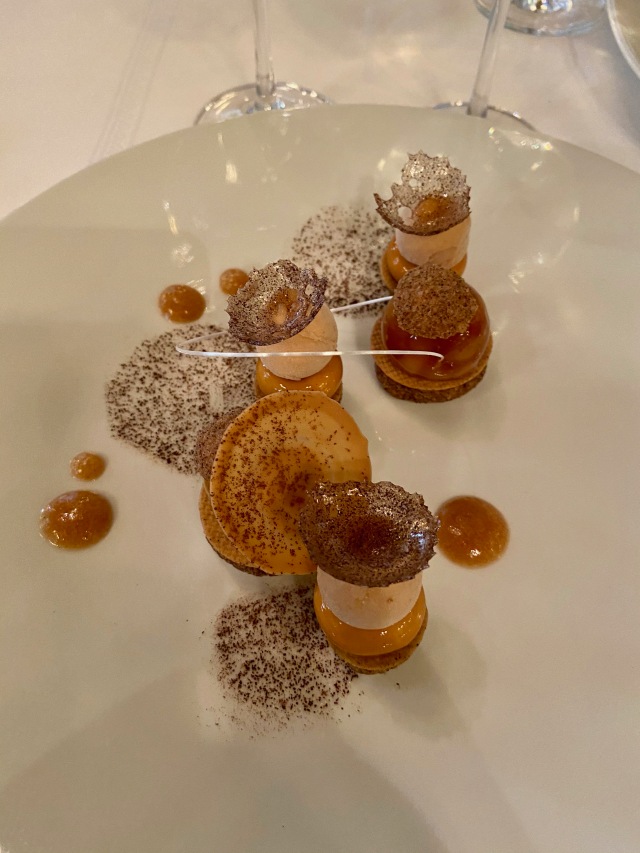 More from the restaurant’s website:  “A list of regular customers over the last two centuries includes most of the immortal heavyweights of French culture and politics. Closed from 1905 to 1947, a revived Grand Véfour opened with its early nineteenth-century neoclassical décor of large mirrors in gilded frames and painted supraportes.

In 1983, the restaurant was destroyed in a bomb attack. It was then bought by Jean Taittinger who restored and reopened Le Grand Vefour. When it lost one of its three Michelin stars in 2008 under the régime of Guy Martin for the Taittinger Group, it was headline news.” 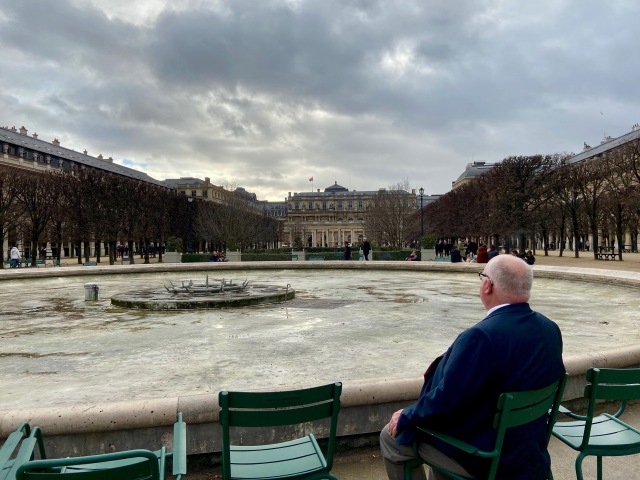 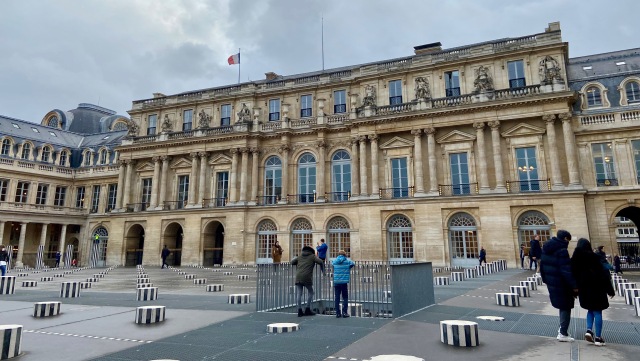 We wandered within the Palais Royal, under the colonnades and out in the gardens by the fountain.  In spite of the chill, we sat down on the chairs and just enjoyed the experience of being in Paris.

Just outside the Palais Royal is the Louvre and the crowds suddenly felt much larger.  We could have walked around a little more, but we had already visited this area and the food and wine had made us sleepy, so we took a cab back to the hotel.  With the transportation strike, there are a very limited number of trains operating, but our concierge was able to get us tickets to Rouen tomorrow so we are taking a lazy day and will hang around the area of our hotel after a nap.

Photo ©Jean Janssen. At the intersection of several major boulevards in the 8th arrondissement of Paris sits Saint-Augustin Catholic Church.

Our hotel was not far from the intersection of several of the major streets in the 8th arrondissement at Église Saint-Augustin de Paris.  “Saint-Augustin was built to provide a counterpoint to the famous columns of La Madeleine at the other end of the boulevard. It was also designed to be visible from the Arc de Triomphe down the avenue de Friedland. The chosen site, an odd shaped lot at the intersection of four streets, and the need for a dome of 200 feet (61 m) so as to be visible from the Arc de Triomphe, dictated unusual proportions for the building…Saint-Augustin was built between 1860 and 1868 in an eclectic style combining Tuscan Gothic and Romanesque elements.”

Photo ©Jean Janssen. Near the Saint-Augustin intersection in Paris there are numerous cafes for economical dining and a great option for travelers using Gare Saint-Lazare.

Pedestrians travel in a circle around the various boulevards that intersect at this point in the city.  There are lots of cafes all around the circular path and Boris and I ate in this area often without the need to go to the same place twice.  These were more economical meals.  We are not far from our last Hotel, Hilton Paris Opera, that sits next to the Gare Saint-Lazare (train station).  We often saw people with suitcases dining in the cafes.

Photo ©Jean Janssen. A cafe near St. Augustin at night.  Natasha’s attempt at a panoramic photograph.

Photo ©Jean Janssen. View from a cafe at night near St. Augustin, Paris.

By passing through the St. Augustin intersection, there was also easy access to the major shopping district near Galleries Lafayette from our hotel.  Leaving St. Augustin’s, we just walked down Haussemann Boulevard.  The stores were very crowded during my visit.  There was still a fabulous Christmas Tree up in Galleries Lafayette.  Several days into the New Year, many of the smaller boutiques-including the one I had set out for-were still closed for the holidays.

Photo ©Jean Janssen. Multi-story Christmas tree under the domed ceiling of the Galleries Lafayette,  Paris.  You can only see the upper floors in this photograph,  The full tree is much taller than it appears here.

Our last night, we once again found ourselves at the intersection at Saint Augustin when it was time for dinner.  It wasn’t the best food of our trip or even in the area, but I loved the restaurant’s decor.  Time to go back on the diet when I get home.  Paris has been a delight.  From here, Natasha heads back into the real world. 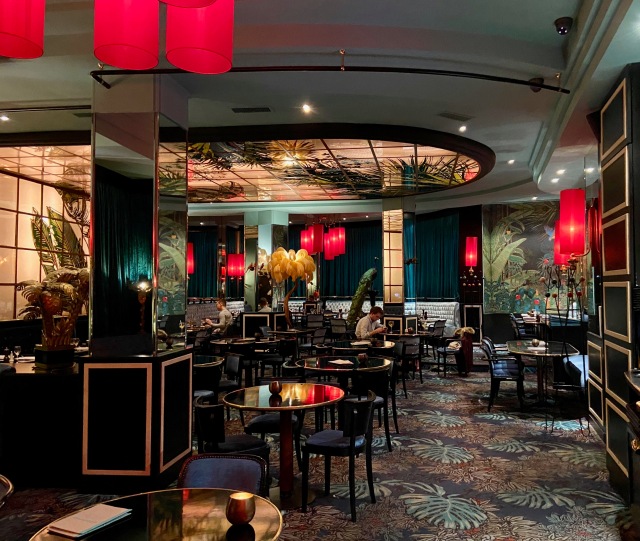 Tomorrow, I will share our visit to Rouen.  –Natasha

I am a retired attorney who loves to travel. Several years ago I began working on a Century Club membership achieved by traveling to 100 "foreign" countries. Today, at 49 years of age the count is at 82. Many were visited on land based trips. Some were cruise ports. Some were dive sites. Most have been fascinating.
View all posts by travelbynatasha →
This entry was posted in international and tagged France, Grand Vefour, Palais Royal, Paris. Bookmark the permalink.