A Trip to Paris for Boris

Posted on July 2, 2018 by travelbynatasha

Yes, I know on my last series of posts we were celebrating Boris’ birthday with a trip to Cuba.  However, since he needed to be in London the week after his actual birthday in May, Boris suggested a long weekend in Paris so we could be in the City of Lights on his 60th birthday on May 6th.  I am a little late getting these posts out, but my May and June has been crazy busy as I completed my Presidencies with two non-profit organizations and started planning my next volunteer opportunity. 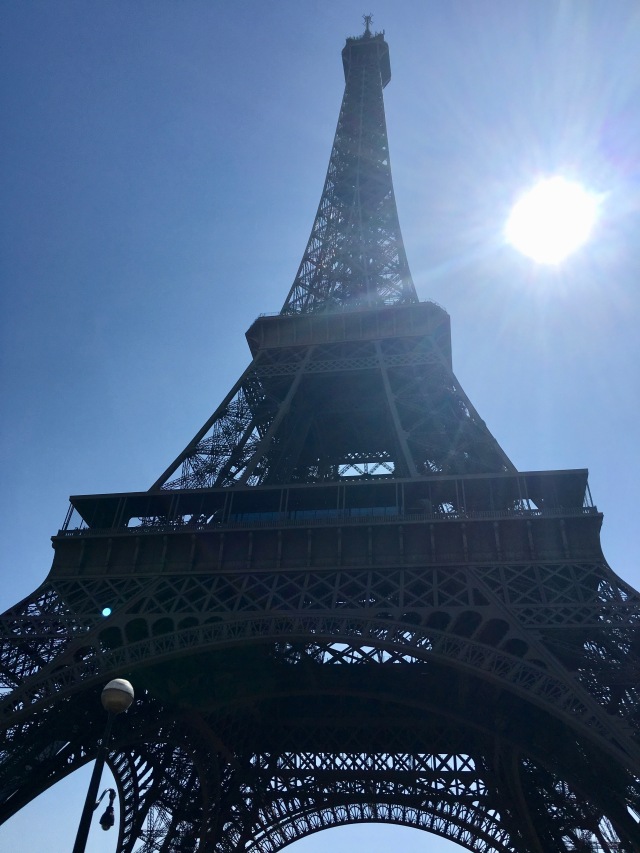 Boris decided we needed to eat at all of his favorite Paris restaurants-think long famous, established, and expensive eateries.  Our itinerary was built around his food choices.  I would recommend choosing just one of these places for a very special meal during your visit.  And how expensive are they?  Some of the tabs (not collectively, but by itself) cost more than my wedding dress.  Enough said.

Photo©Jean Janssen. Looking toward the elevators (mirrored archways at the far end) in the Grand Salon of the Hilton Paris Opera.

Photo ©Jean Janssen. Natasha and Boris in the Grand Salon of the Hilton Paris Opera Hotel.

As my frequent readers know, we often stay at Hiltons to make the most of the frequent visitor program.  If you don’t do this you are missing out.  Chose a chain and try to stay there whenever you travel.  We get accommodations on many of trips to more exotic locations paid for this way.  That is what we were able to do on this trip to Paris.  We are staying at the Hilton Paris Opera using points; our regular room generally rents for over $700 per night.  We are staying 3 nights. 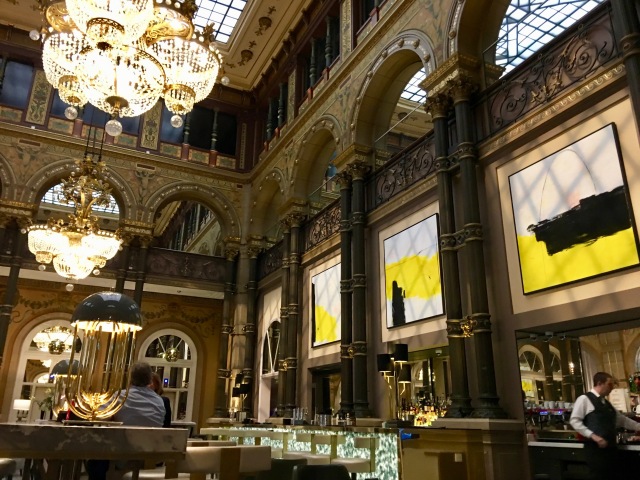 Photo ©Jean Janssen. Modern Art above the bar in the Grand Salon of the Hilton Paris Opera.

The Hilton Paris Opera is the former Hotel Concorde Saint Lazare. The historic, stately building is located in Paris’ major shopping district, just next to Gare Saint-Lazare.  The hotel was also “previously known as the Grand Hotel Terminus, designed by the architect Juste Lisch and originally constructed in honor of the Exposition Universelle in 1889, the same World’s Fair for which the Eiffel Tower was built.”  A major renovation of the hotel was completed in 2015.  According to the British designers, “[t]here were the heritage areas in the public spaces, which needed to be delicately restored, and then there were the guest rooms, which had practically no original features left. The overarching challenge was to take the two halves and make them feel cohesive.” (quoted text is from the travel section of the January 31, 2015 posted edition of Architectural Digest article entitled “Historic Parisian Hotel Refurbished.”) 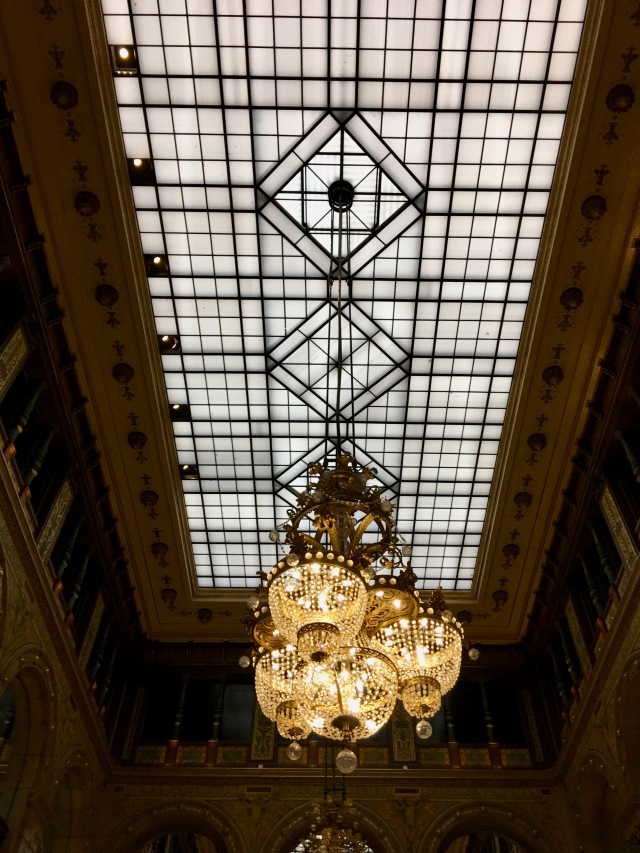 Photo ©Jean Janssen.  Looking back toward the Grand Salon from the elevator bank at the Hotel Paris Opera.

In the entrance lobby and Le Grand Salon, the renovation project called for “stripping away decades of dirt and layers of paint, uncovering the ornate, hand-painted details beneath. In the impressive Grand Salon, a mirrored ceiling was replaced by a backlit one to give the effect of natural daylight seeping into a covered courtyard.  When it came to layouts and furnishings”  the renovators “purposefully didn’t try to re-create the original, opting instead for an obvious modern element that would clearly differentiate the old from the new. To avoid too stark of a contrast, however, [they] used an assortment of vintage furniture from the ’60s, ’70s and ’80s to make the common spaces feel as if they had evolved over time.”  (quoted text is from the travel section of the January 31, 2015 posted edition of Architectural Digest article entitled “Historic Parisian Hotel Refurbished.”)

As lovely as the hotel is, it was also a great choice because of its location.  It is literally next door to a train station (as hinted at in the various names the hotel has had).  The Gare Saint-Lazare is the second busiest railway station in Paris.  Its design is also by Juste Lisch.  The Gare Saint-Lazare was the subject of many impressionist paintings by Édouard Manet to Claude Monet.  It is a prime location for access to Paris shopping in the Opera District of the 8th arrondissement. 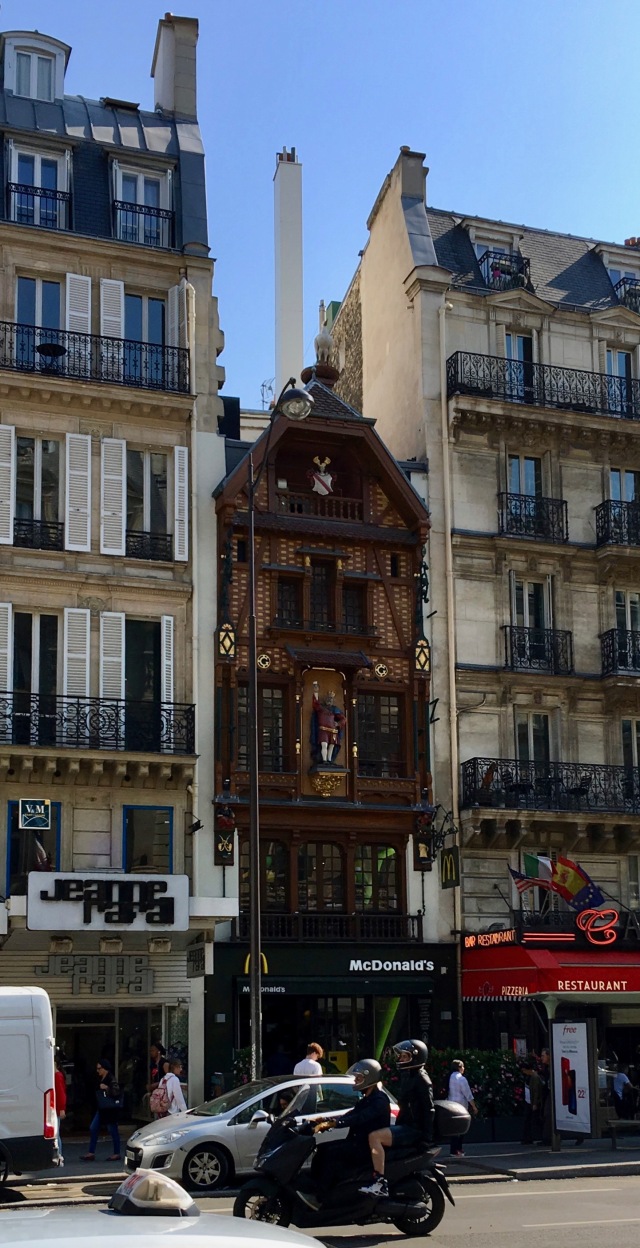 Just across the street from our hotel on the Rue Saint-Lazare was a McDonald’s. The building dates back to 1892 and has been listed as a historic monument since 1997. The Daily Meal‘s research found that “the building was originally home to a restaurant called Au Roi de la Biere (“The King of Beer”), which opened around the turn of the twentieth century. As for the statue, that’s of none other than Gambrinus, a legendary figure in parts of Europe; he’s widely celebrated as an unofficial patron saint of beer and is often referred to as the King of Beer.”

The quarter, formerly known as Little Poland, underwent a major renovation with the building of the Gare Saint-Lazare and the hotel.  Many buildings were razed.  Some considered the area “a den of thieves, cutthroats , and murderers.  The great detective Vidocq whose life inspired Edgar Allen Poe’s fiction such as Murders in the Rue Morgue and was the creator of the ‘world’s first detective agency’, prowled the area.” (quoting Boris) 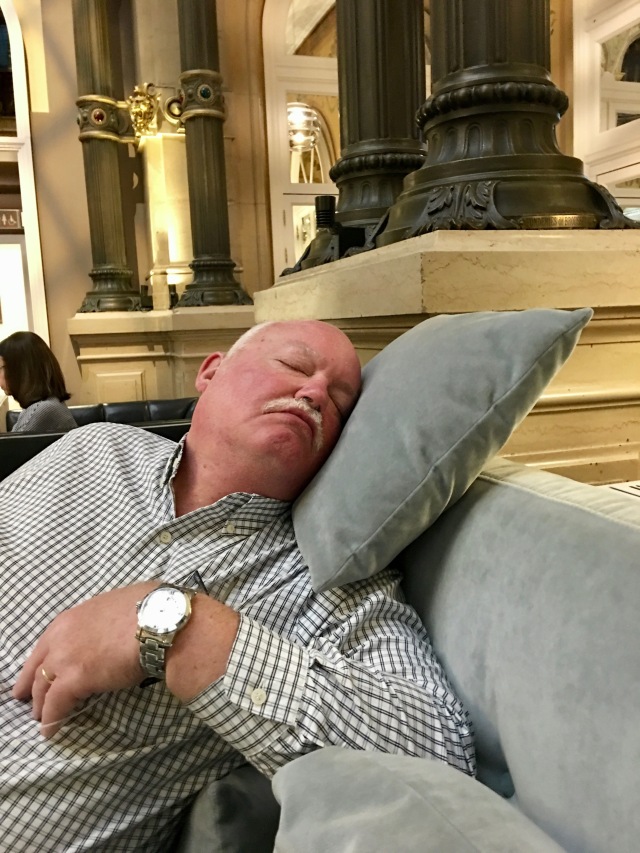 Photo ©Jean Janssen. Boris crashed on the comfy sofa in the Grand Salon of the Hilton Paris Opera.

We took an overnight flight to Paris and then a car to the hotel.  Our room wasn’t quite ready, so we enjoyed a drink in the Grand Salon before heading upstairs.  We unpacked and rested a bit.  I hated to miss a late afternoon in Paris, but I knew I would be no good in the evening if I didn’t get my jet lag cat nap. 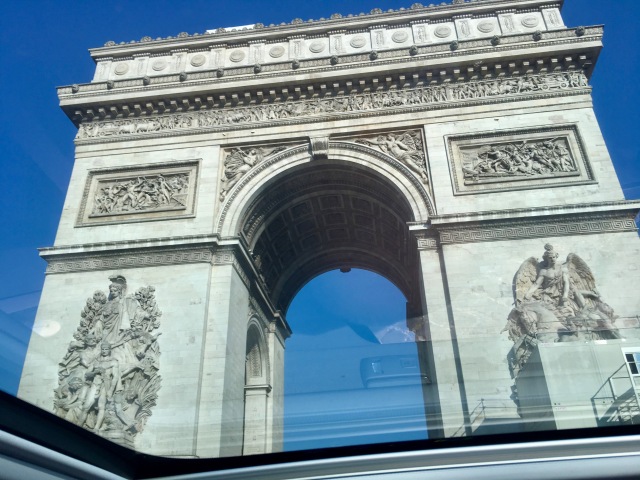 Photo ©Jean Janssen. We took the scenic route to the restaurant (perhaps all routes are scenic in Paris) past the Arc de Triomphe des Champs Elysees

Photo ©Jean Janssen. Mosaic tiles in the colors of the seas covered the facade of Restaurant Prunier Victor Hugo in Paris.

That evening was the first in our “dining series”.  Boris had made reservations at Restaurant Prunier Victor Hugo (designating the street).  It was a relatively short cab ride, circling by the Arc de Triomphe des Champs Elysees, to the restaurant.  Prunier retains its ornate art deco furnishings created in 1925.  The facade of the building is covered in stunning mosaic tiles.

Photo ©Jean Janssen. Upstairs in Restaurant Prunier are the toilets (also with amazing art deco decor) and the group/private dining areas. When the restaurant was first conceived, you began your meal and had drinks downstairs. Those patrons having a full meal then went upstairs to complete the service.

Photo ©Jean Janssen. Seafood tank at the bar in Prunier. At the far end of the room was the fresh seafood bar.

The restaurant has long celebrated seafood.  Alfred Prunier, age 24, and his wife Catherine opened their first restaurant in 1872 specializing in oysters.  After developing relationships with the Russian aristocracy, they begin to import caviar.  Prunier’s son Emile expanded the business to fresh fish, even setting up a fresh fish market next door.  He also introduced a tasting bar in the restaurant for patrons to sample fresh seafood. 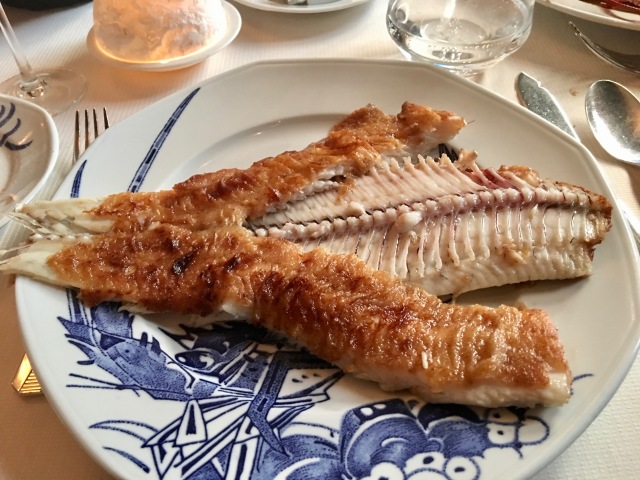 Photo ©Jean Janssen. My amazing trout at Prunier in Paris. so good I ate the meat above and below the bone.

Photo ©Jean Janssen. Preparing my main course under open flame at Restaurant Prunier in Paris. Note the beautiful art deco decoration and the bust of the sea captain.

Today the restaurant continues the tradition of focusing on fresh seafood.  The fish tank behind the bar was empty, but the tasting bar was ready for sampling the delicacies.  The restaurant also continues to offer a wide selection of caviar.  We started with the seafood tower with a wide variety of fresh fish-oysters, shrimp, different varies of mussels, clams, and crab.  There were even a few things I couldn’t identify, but everything tasted fabulous.  Boris’ main course was lobster; mine was trout.  It was prepared over an open flame near the table. 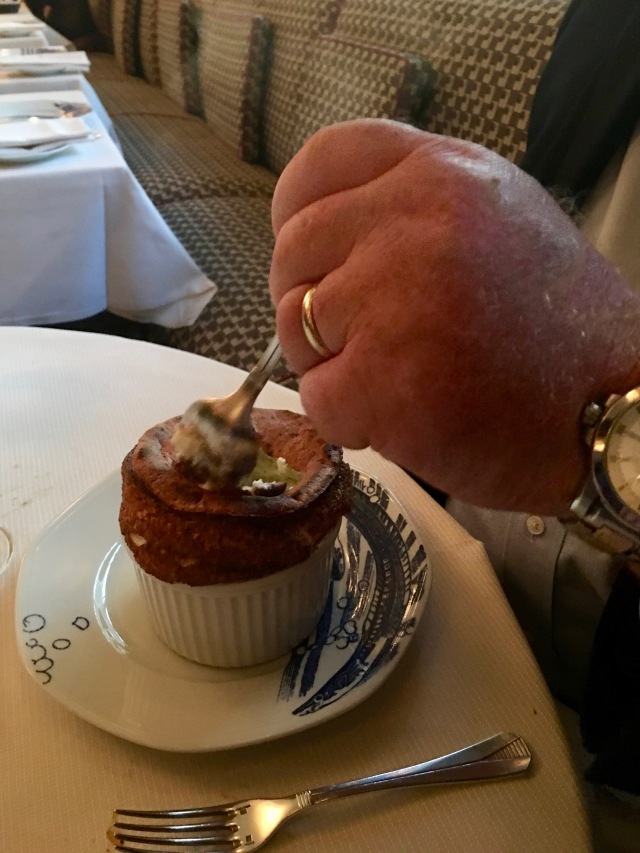 Photo ©Jean Janssen. Boris’ soufflé at Prunier. When in Paris…

Photo ©Jean Janssen. We had early reservations (7 pm) at Restaurant Prunier; being the first patrons to arrive, we got the corner seat. (They started turning lights on after we arrived.) It remained mostly empty the entire time we were there.

We were the first to arrive at the restaurant, having 7 pm reservations.  The Parisians eat much later, but our waiter told us they open the restaurant early for the Japanese tourists who (like Boris and I) eat their dinner earlier.  First to arrive also meant we got the prime corner seat.  Wonderful.  We ended the meal with amazing desserts.  Boris couldn’t pass up the opportunity for a soufflé. 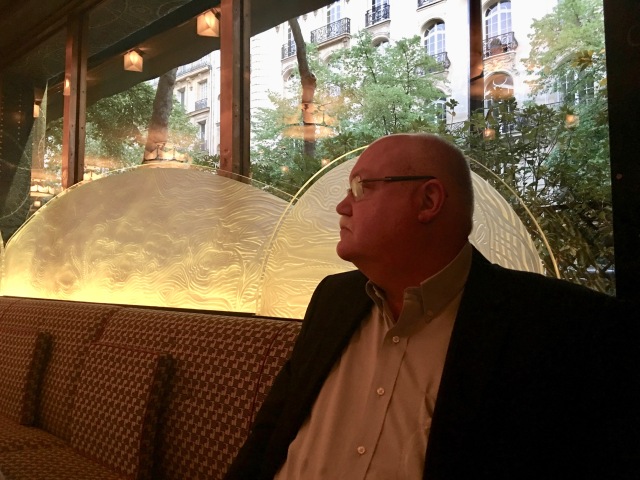 Photo ©Jean Janssen. Boris made reservations at five special restaurants, most of his favorites in Paris. Prunier was a place he had always dreamed of going. It was my first visit as well. 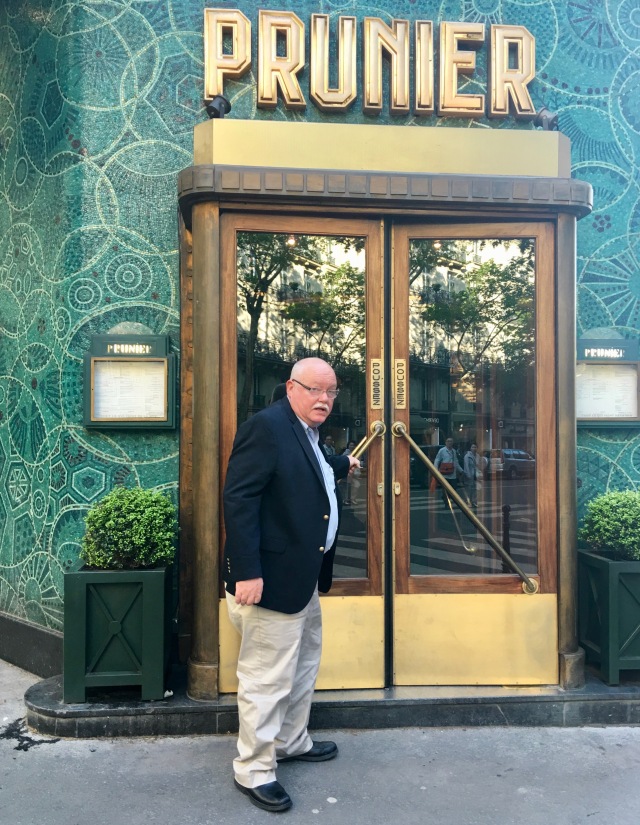 Photo ©Jean Janssen. Boris’ birthday tour of the timeless restaurants of Paris. 1 down, 4 to go.

It was still light outside when we headed back to the hotel, the sun setting behind the Arc de Triomphe des Champs Elysees as we passed back by.  To overcome our jet lag, we are going to bed early and have a full day planned for tomorrow, our first full day in Paris. 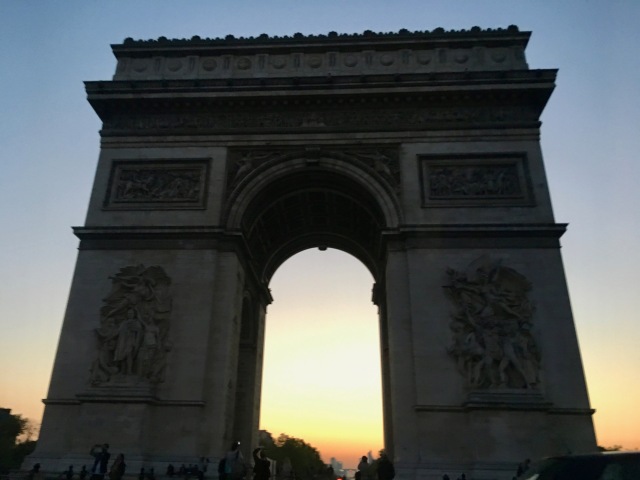 I am a retired attorney who loves to travel. Several years ago I began working on a Century Club membership achieved by traveling to 100 "foreign" countries. Today, at 49 years of age the count is at 82. Many were visited on land based trips. Some were cruise ports. Some were dive sites. Most have been fascinating.
View all posts by travelbynatasha →
This entry was posted in international and tagged Arc d'Triumph, Arc de Triomphe, France, Gard Saint-Lazare, Hotel Paris Opera, Paris, Prunier, Restaurant Prunier Victor Hugo. Bookmark the permalink.