The Christmas Season in Strasbourg, France

Posted on February 14, 2020 by travelbynatasha

Today we will be visiting Strasbourg, France which sits right on the border of France and Germany.  In fact, due to tax benefits many of the people that work in the city live across the bridge in Germany.  They have changed the bus parking and unloading since our last visit and we had a bit of a walk to reach the center of the city and the Cathedral of Our Lady. 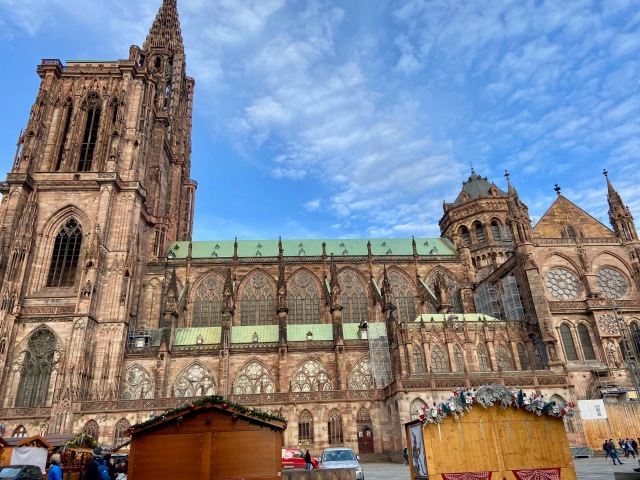 Photo ©Jean Janssen Side view of the Cathedral of Our Lady in Strasbourg, France. The Christmas Market booths were not yet open when we arrived. We found that most of the Christmas markets on our itinerary opened around 11 am.

Photo ©Jean Janssen. Throughout Europe we have found that many of the churches and other special buildings are reproduced in small scale in detailed bronze for the blind. Here is an example done for the Strasbourg Cathedral.

On our last visit we took a canal tour and had a nice orientation of the city from that perspective.  That wasn’t offered during this winter visit but I look forward to the walking tour.  We also had a snack stop for wine and pastries.  It was a perfect time to walk around before the booths at the market opened up. 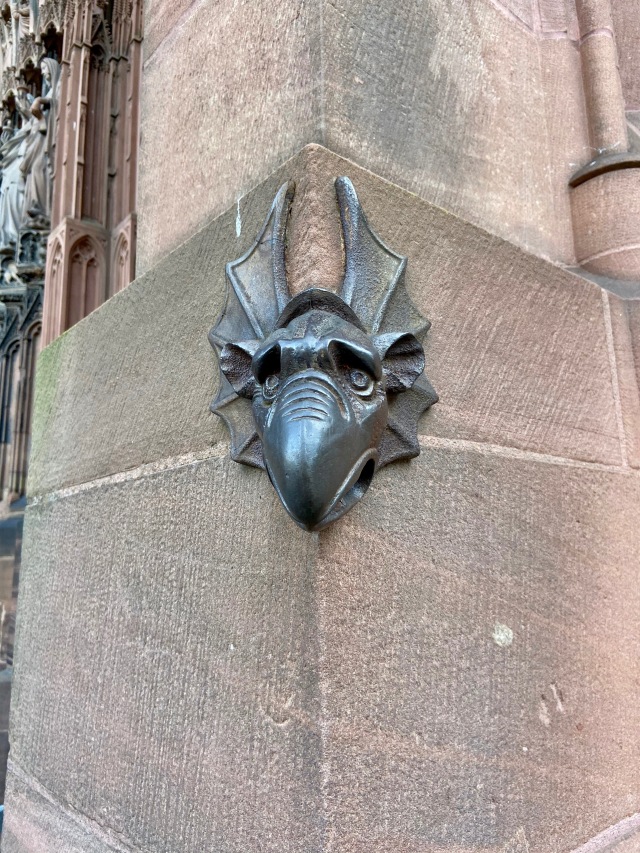 Photo ©Jean Janssen Spotted on Strasbourg’s Cathedral of Our Lady.

No surprise that we started our visit at the Cathedral.  It has a beautiful interior and very special timepiece that I saw on my last visit.  (Check out that post for pictures of the interior.)  Today we just saw the exterior.

We headed down the shopping street that ends right at the Cathedral’s doors and I began to notice the wonderful decoration done on the top of store windows and doors.  Looking back we got another great shot of the Cathedral.  It was time for our first snack stop.

Photo ©Jean Janssen In Strasbourg, they know how to do Christmas decorations. This Baccarat crystal chandelier hangs over a street in the city.

Photo ©Jean Janssen. As the decoration tells us, we are heading into Petite France in Strasbourg.

One of the markets we passed focuses on a different country each year.  Like the other cities we visited, we found holiday markets in most of the city squares.  We are headed to Petite France, an historic quarter of Strasbourg known for its half-timbered houses, bridges, canals, narrow lanes, and charming shops.   While now one of the city’s major tourist areas, this quarter was home to the tanners, millers, and fishermen in the Middle Ages which is why is area is also known as the Quartier des Tanneurs (French), Gerberviertel (German) or Tanner’s Quarter (English).  Most of the houses date from the 16th and 17th centuries.

The name Petite France may sound romantic or even patriotic, but it has a more serious origin.  “[Petite France] comes from the ‘hospice of the syphilitic’… which was built in the late fifteenth century on this island to cure persons with syphilis, then called Franzosenkrankheit (‘French disease’) in German.”  Not as charming as the area name might suggest. 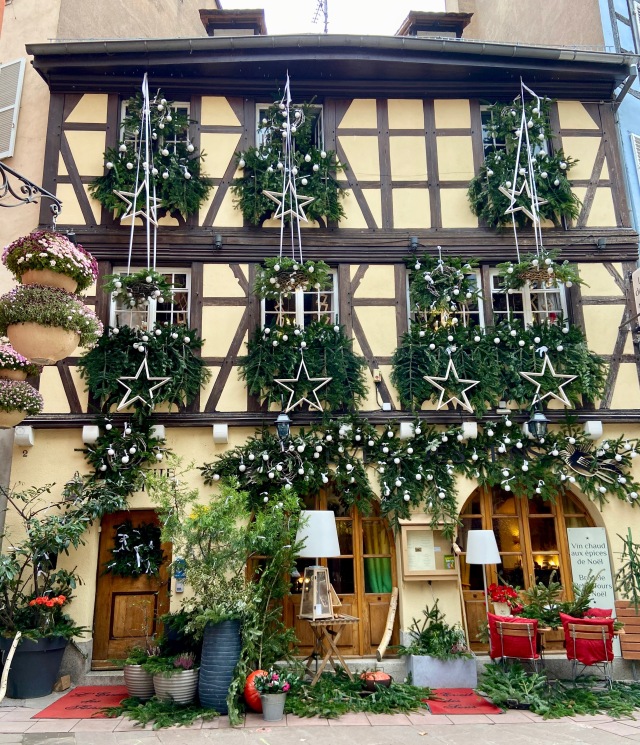 Photo ©Jean Janssen. A bicycle built for two along the canal in La Petite France, Strasbourg.

Today however, this area is utterly charming.  It is fun to see the quarter by boat drifting along one of the canals or by walking through the narrow lanes (or as I have now done it, by both).  The shopping in this area is amazing too, both in the Christmas markets and in the small shops in the area.  In the market, I selected one of the ceramic houses that mimicked the half-timbered house to add to our Christmas collection.

The tour ended in La Petite France, so I decided to do some shopping here and slowly make my way back to the bus visiting the various markets in the city.  No lunch today.  With our morning snacks, I am going to push through so I have time to see more before my feet give out.

Photo ©Jean Janssen The stork is a symbol of the city and you find it revisited throughout Strasbourg, France

Photo ©Jean Janssen Spotted in the market by the Cathedral in Strasbourg, France

By far, Strasbourg had the best shopping of any of the places we visited.  I could have done that all day long.  Be careful for shop closures.  Gill and I spotted some slippers we were interested in (window shopping) but the store closed for a break and weren’t open again until after we had to leave for the bus.

Photo ©Jean Janssen. Shopfront decorations in Strasbourg France. This is my favorite shop in the city which I found on my first visit.  Periodically, bubbles were blown out of a second story window which made it appear that there was snow coming down on this narrow street.

The Christmas delight for me however, was all the shop decorations.  I had already thought it a charming city based on my previous visit, but they went above and beyond in their storefront decorations.  At my favorite store on a narrow street, bubbles were blown from a second story window making it appear that it was snowing on that street alone.

Photo by Gillian. Natasha in a Strasbourg Christmas Market.

We were drawn in to one of the markets by the large Christmas tree that we just had to take photos by.  All the booths in this market were local charities.  In the main market near the Cathedral, the big find for the day for me was some unique table linens.  The designer was there.  She is from Madagascar and sends her designs back to her home country for the work to be completed by the locals to support their economy.  It was a purchase I could feel good about especially having been a visitor to their country.

Photo ©Jean Janssen. The calm before the storm…Strasbourg France, when we started the day. 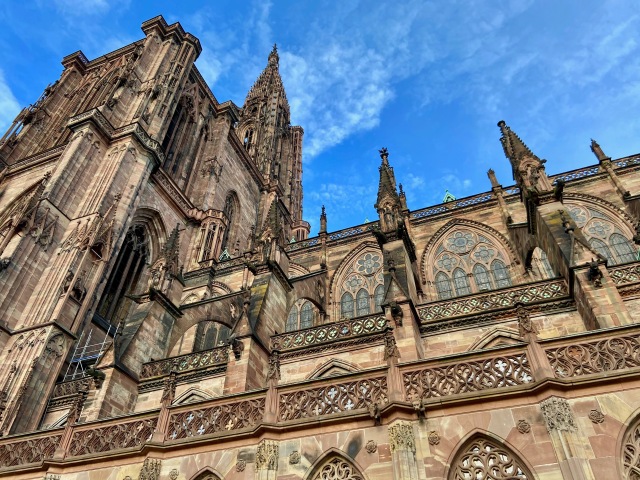 I was exhausted when I finally made it back to the ship.  There is one more stop on the cruise in Basel, Switzerland.  At this point I would have to say that hands down for this itinerary, the best shopping-both in the markets and in the stores-and the best shop Christmas decorations are to be found in Strasbourg, France.  As for the markets, I think I found it the best because there were local artisans and (reasonably priced) unique items.   They say third time is the charm; I guess I should come back.

Photo ©Jean Janssen. Sailing out to our last stop in Basel, Switzerland

I am a retired attorney who loves to travel. Several years ago I began working on a Century Club membership achieved by traveling to 100 "foreign" countries. Today, at 49 years of age the count is at 82. Many were visited on land based trips. Some were cruise ports. Some were dive sites. Most have been fascinating.
View all posts by travelbynatasha →
This entry was posted in cruises, international, River Cruise and tagged canal, Cathedral of our Lady, France, La Petite France, Petite France, Strasbourg. Bookmark the permalink.

1 Response to The Christmas Season in Strasbourg, France