A castle and Christmas markets in Heidelberg, Germany

Posted on February 13, 2020 by travelbynatasha

Today we have a day-long trip into Heidelberg to visit the castle and Christmas Markets.  Its a familiar ride given my summer visit here.  You go through the industrial areas before reaching one of the most fairytale-like cities in Germany. 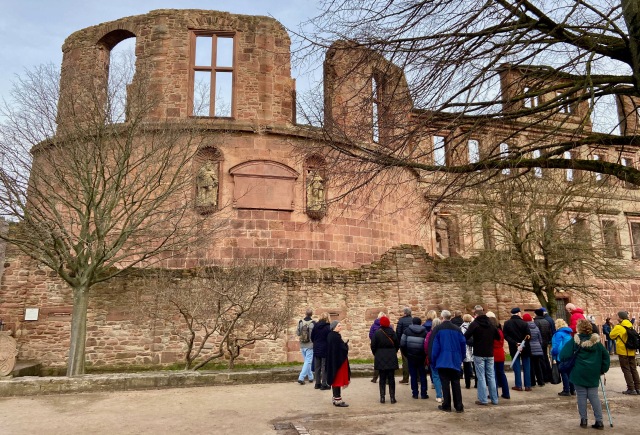 Photo ©Jean Janssen. Heidelberg Castle, Germany. On the left is the Fat Tower added for defense by Ludwig V. On the left is the English building, with its relatively plain facade, added to the Palace by Friedrich V to accommodate his English Queen since the spaces within the castle courtyard were occupied. Just outside was the leveled garden he commissioned for her. 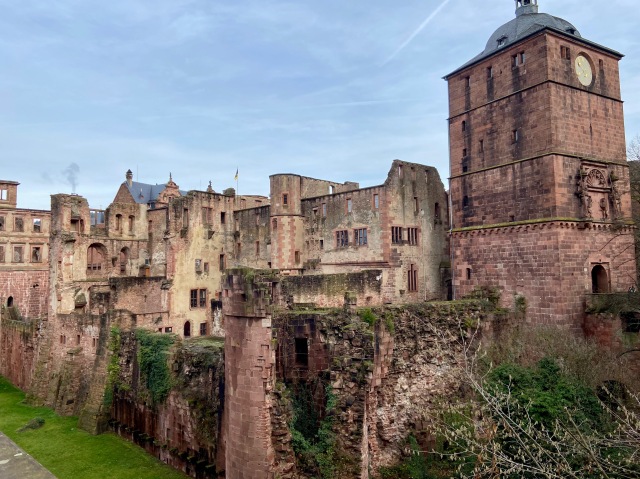 Photo ©JeanJanssen. As seen from the garden the entrance gate, castle ruins, and moat of Heidelberg Castle, Heidelberger Schloss in German, Germany.

Heidelberg is set along the Neckar River.  We first climbed the hill to reach the narrow car park at the castle.  We’ll take the funicular down into the city.  As crowded as it was in the car park, the number of visitors this day is nothing like what I experienced here in the summer.  We first stopped to see the arch and artillery garden with its sweeping views of the city before going inside the castle where you need a ticket to enter.  To create the garden, it was necessary to level the hillside next to the moat surrounding the complex of castle buildings that open onto the courtyard beyond the tower gate.

Photo ©JeanJanssen. View of the city of Heidelberg from Heidelberg Castle, Heidelberger Schloss in German, Germany.

Heidelberg is home to Germany’s oldest University and it is clearly a University town.  25% of the city’s population are students.  In fact, much of what we could see from the castle garden was University buildings.  The University has an interesting fraternity history.  Many of the buildings we passed on the winding ride up to the castle were originally fraternity houses. 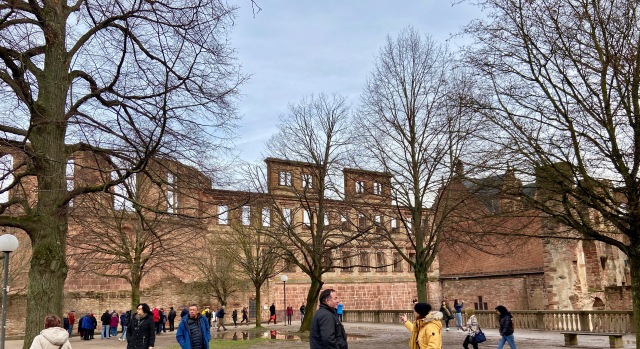 The arch, the artillery garden where we took in the view, and English Building were added by one of the castle’s famous residents, Friedrich V, who married Elizabeth Stuart, daughter of the King James I of England.  The young couple married in 1613.  To please his wife, there were elaborate wedding festivities and extensive renovations to a castle which dates from the 11th century and has been ravaged by invaders, fires, lighting, and war. 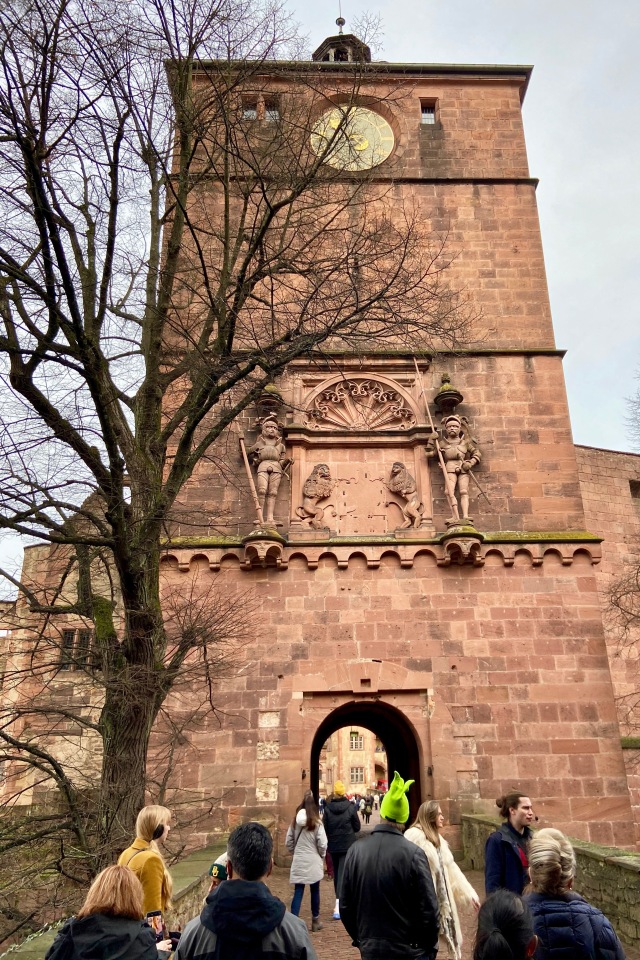 Photo ©Jean Janssen To enter the courtyard of Heidelberg Castle you cross the bridge and through this tower. 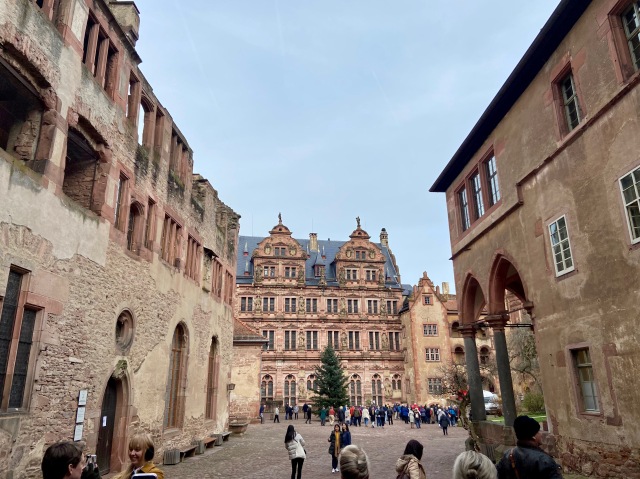 Photo ©Jean Janssen. As you enter Heidelberg Castle, the Ruprecht Building, the oldest surviving residential palace within Heidelberg Palace, is to your left. Straight ahead is the reconstructed Friedrich Building.

Photo ©Jean Janssen.  In the courtyard of Heidelberg Palace, you see the Friedrich building to the left, The Hall of Glass in the center and the Ottheinrich Building on the right

You take a stone bridge over the moat/ditch to reach the castle courtyard.  There is a rich mix of architectural styles from the Gothic Ruprecht Building-the oldest surviving residential palace within Heidelberg Palace- to the beautiful Renaissance Ottheinrich Building and the Italian-arched Hall of Glass to the reconstructed Late Renaissance Friedrich Building.  Before reconstruction took place from 1897 to 1900, castle bricks had been looted to construct the town below and the area was used to graze cattle and keep chicken and geese.  The structures had been used to dry laundry.   To maintain the romanticized version of the setting which had begun to draw visitors in, only the Friedrich Building which had been damaged by fire was reconstructed.

Photo ©Jean Janssen. The Ottheinrich Building at Heidelberg Castle. According to the Castle’s website, “[t]he sovereign’s self-image and his political agenda were immortalized in stone here. Ancient heroes and Roman emperors represent military and political power. However, the Christian virtue that a ruler is also expected to possess, is likewise represented. Ottheinrich had himself installed in the central portal pediment.”

Photo ©Jean Janssen. The Friedrich Building at Heidelberg Castle. According to the castle’s website, “Prince-Elector Friedrich IV had the stately residential palace built by his architect, Johannes Schoch, between 1601 and 1607, on the pedestal of a previous medieval structure..An idealized gallery of ancestors from the electoral family were used to demonstrate his claim to power. Thus, visitors can also see a depiction of Friedrich IV, as the final representative of his illustrious ancestral line, reaching back to Charlemagne.”

Of less historic significance is the popular attraction which is inside-the world’s largest wine barrel-in the appropriately-named Barrel Building.  The current barrel is the third iteration and was installed by Prince-Elector Carl Theodor.  This barrel holds 220,000 liters (over 58,000 gallons) of wine.  It has it own viewing platform; the platform had previously been used as a dance floor. 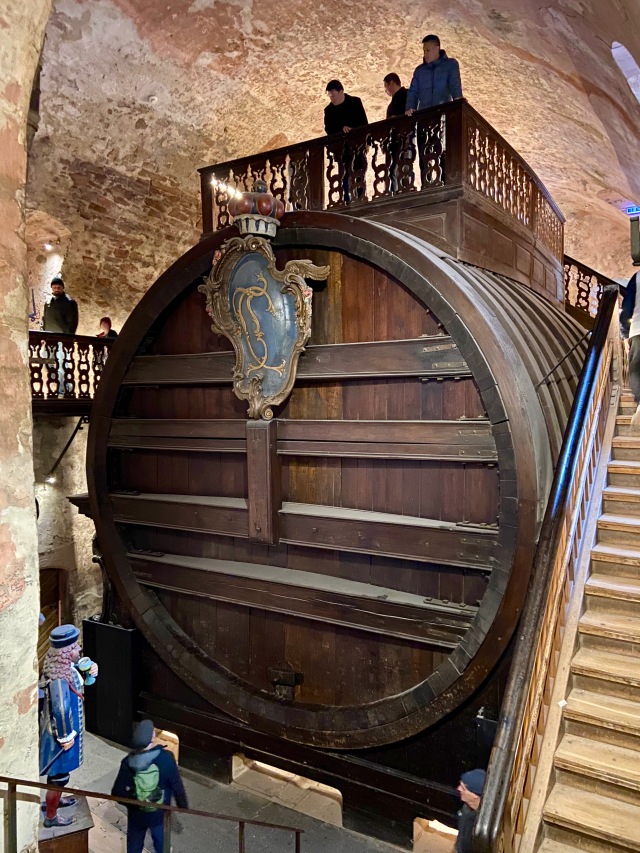 Photo ©Jean Janssen. The Great Barrel at Heidelberg Castle. The statute of Perkeo is to the left side. 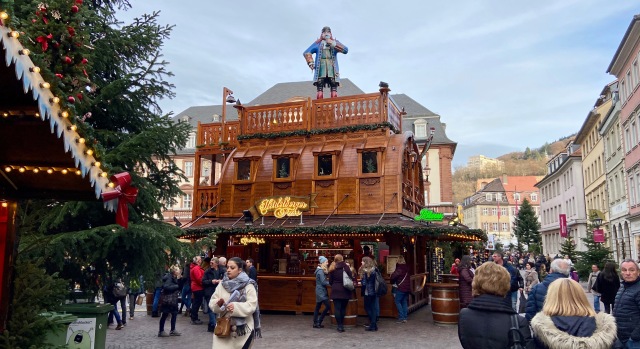 Photo ©Jean Janssen. A statute of Perkeo sits atop a wine barrel stall in a Heidelberg Christmas market. No surprise that the stall sells gluhwein.

A famous figure associated with the barrel is Perkeo and a statute of him stands guard by the barrel.  Little Perkeo was the court jester of Price-Elector Carl Philipp famous for holding his liquor.  We saw other references to the famous jester in the city’s Christmas Markets.

Photo ©Jean Janssen. The funicular path down from the castle to the Kornmarkt in the city of Heidelberg. 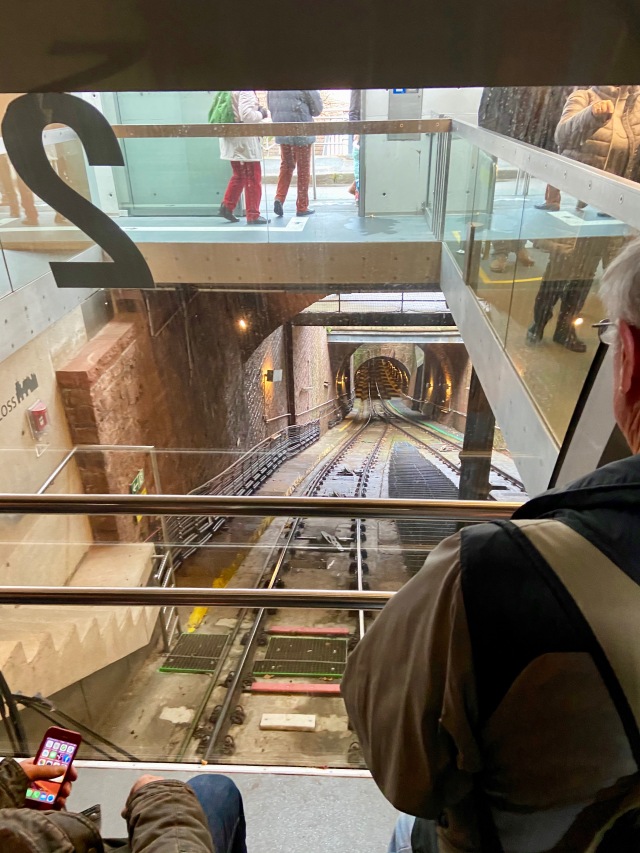 Photo ©Jean Janssen. Riding the Funicular down to Heidelberg, Germany.

After our castle visit, we took the funicular down to the city station at the Kornmarkt to visit the many Christmas markets in the city’s various squares.  This lower portion of the funicular has been in operation since 1890.  One member of our group chose to upgrade his funicular ticket and took the trip up to the ruins of the upper castle at Konigstuhl, the city’s highest point.  He told me later it was worth the trip. 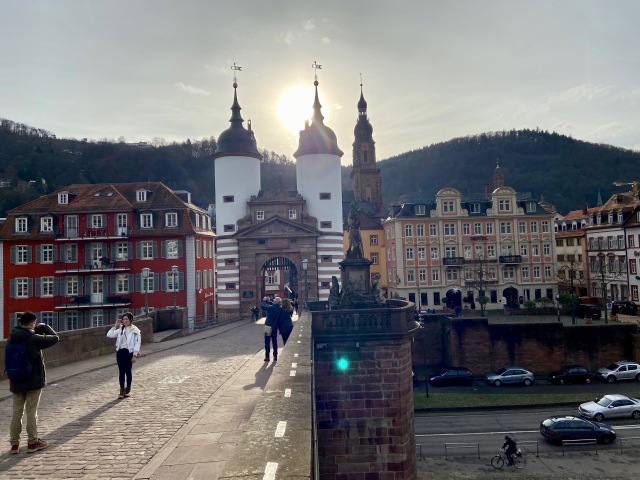 Our guide gave us a bit of tour in town, pointing out the major sites and the pathway to others.  Gillian had something she particularly wanted to see, a statute of a monkey that she had seen with her parents as a child.  I went along as the guide took us there.  It was right next to the Karl Theodor Bridge that crosses the River Neckar.  The Karl Theodor Bridge, commonly known as the Old Bridge, was built in 1788 by Prince-Elector Charles Theodore.  The arched bridge visible from the castle is “one of the best-known landmarks and tourist destinations in Heidelberg.”  Gillian got a picture with the statute of the monkey, designed so you can put your head inside, but it wasn’t the one she remembered from her childhood.

Photo ©Jean Janssen. Shopping in the Kornmarkt in Heidelberg with views of the castle in the distance. 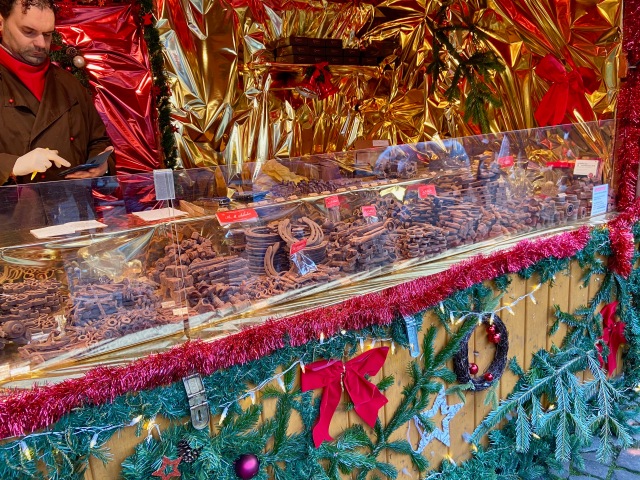 Photo ©Jean Janssen. Something unique, chocolate in the shape of tools in the Christmas market in Heidelberg, Germany.

Gillian and I stayed together and walked through a few markets before deciding we would rather sit down for a nice traditional German meal in a restaurant rather than stand to eat in one of the markets.  We went to a wonderful place that the guide-who lives in Heidelberg and runs a theater company-suggested.  We liked the decor, particularly the light fixtures made from violins, and had great service from a woman who was originally from England but had lived with her family in Germany for over 35 years.  She was more than a little concerned about what Brexit would do to her status. 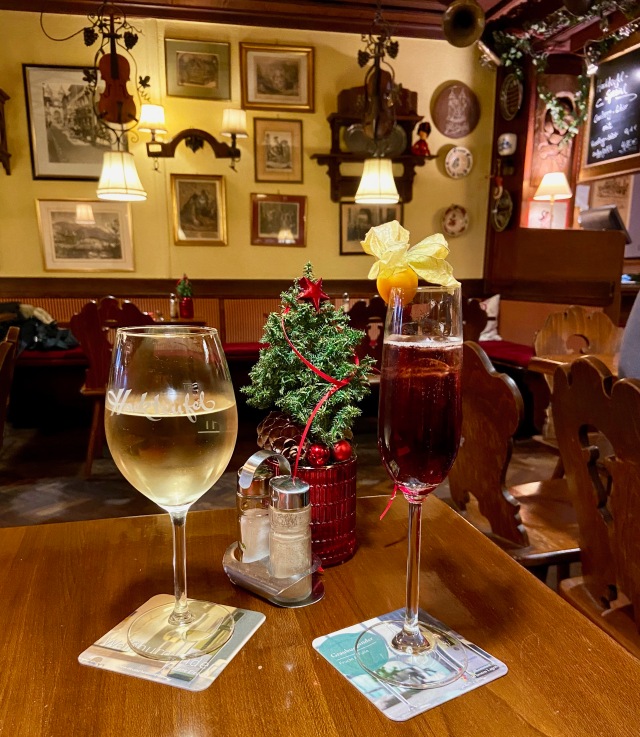 We started with a cocktail and then had one of the best German meals I have ever tasted, hardy and fabulous.  My German father would be so proud.  We were fortified for the shopping ahead.  Afterwards, we went into a grocery store to buy chocolate at prices far better than I can get in the states.  We did split up at the end to get in those power purchases before meeting up with our group.  There is a lot to see in Heidelberg beyond the castles and the markets.  I tried to hit the highlights on my last visit.  Wouldn’t mind returning once again. 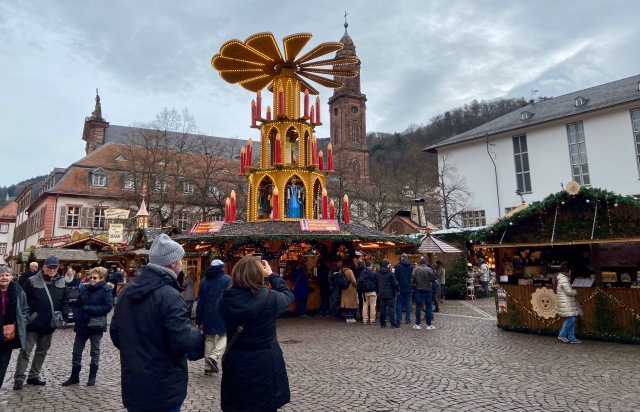 Photo ©Jean Janssen. I have started looking for these in each city where we go to markets. There is generally a skating rink. Heidelberg, Germany 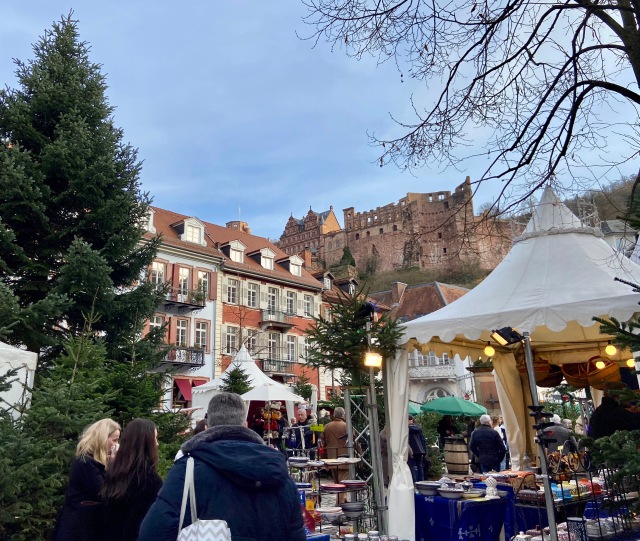 Photo @Jean Janssen. Shopping with a view. A Christmas market in Heidelberg with the castle in the background.

This might actually be one of the best times to visit the city.  In spite of the markets, the crowds were far thiner than they had been during our summer visit.  Heidelberg is definitely a city to put on your bucket list.

Photo ©Jean Janssen. Everywhere you look there is another amazing view of the castle. Heidelberg, Germany

I am a retired attorney who loves to travel. Several years ago I began working on a Century Club membership achieved by traveling to 100 "foreign" countries. Today, at 49 years of age the count is at 82. Many were visited on land based trips. Some were cruise ports. Some were dive sites. Most have been fascinating.
View all posts by travelbynatasha →
This entry was posted in cruises, international, River Cruise and tagged artillery garden, Barrel Buliding, English Building, Fat Tower, Friedrich Building, funicular, Germany, Hall of Glass, Heidelberg, Heidelberg Castle, Heidelberger Schloss, Karl Theodor Bridge, Kornmarkt, Old Bridge, Ottheinrich Building, Perkeo, Ruprecht Building. Bookmark the permalink.