Posted on September 10, 2019 by travelbynatasha

Photo ©Jean Janssen. Entering the walled harbor at Le Palais on Belle Isle, France.  You see the city of the left and the citadel on the right.

Today we are docked just off of Belle Isle, France.  Like our previous stop, the island is in the Brittany region of France.  It is the largest of Brittany’s islands and less than nine miles from the Quiberon peninsula extending from the French coastline.  The island has numerous small inlets and beaches and a breathtaking coastline, as seen on our way in to anchor.

Artists have always been drawn to Belle Isle.  It is the home to the largest Opera festival in Western France.  Impressionist Claude Monet depicted the island in his work; Australian impressionist painter John Russell established an artists colony on the island; and Matisse’s work is said to have changed dramatically after and been influenced by his visit to Belle Isle.  Author Alexandre Dumas’ characters from The Three Musketeers have ties to the island and the second sequel to the novel is set in part on Belle Isle.

The island is the second home to many of the French.  The island’s population of 5,300 swells in the summer months with the vacationers and opera guests.  The island’s economy depends on tourism and fishing.  That said, they are not set up for nor do they encourage cruise ship visitation.  This stop is a new one for Azamara as the cruise line tries to expand their unique offerings and set themselves apart in the market.  There were only two excursions offered on the island.  The one we were interested in was sold out, so Boris and I are touring on our own.

Not surprisingly, we can not dock at Belle Isle and once again were using the tender boats.  It is a gorgeous day with sunny skies and cool temperatures.  The air feels wonderfully fresh and clean.  The ship’s arrival was timed for 11 am.  I had an early morning massage and then showered.  We had lunch on the ship and then tendered into shore after the excursions had gone out and we no longer needed a tender ticket. 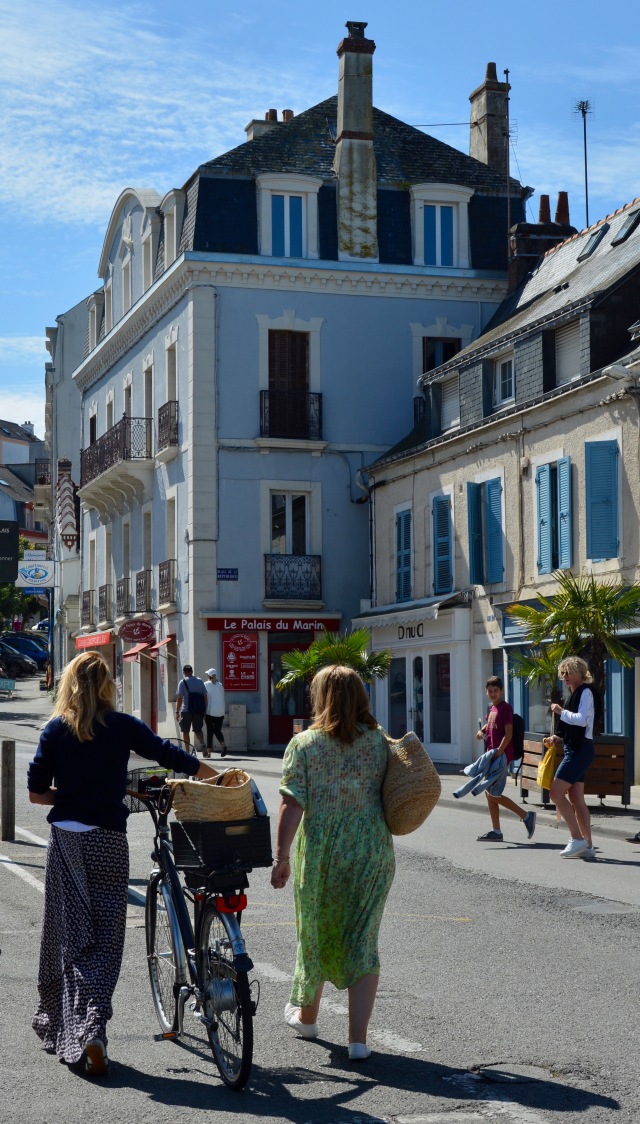 We stopped off at the Tourist Information Center right at the ramp that served as our tender station and picked up a map.  Belle Isle’s harbor at Le Palais is a walled harbor.  (Our tender boats could only enter the walled harbor one at a time and we had to sit just outside the wall and wait for another tender to leave on our way in.)  The city was small and easy to navigate on foot.  I found it utterly charming. I am always drawn to churches and led Boris straight to Le Palais’ Catholic Church just across from city hall.  With the church’s unassuming facade, I was shocked upon entering.  The stained glass windows were beyond beautiful and the altar decoration was colorful and unique.  What a surprise!  However, it will be no surprise to my blog readers that I took lots of pictures inside.  (Boris never complains.  He enjoys sitting and resting inside.) 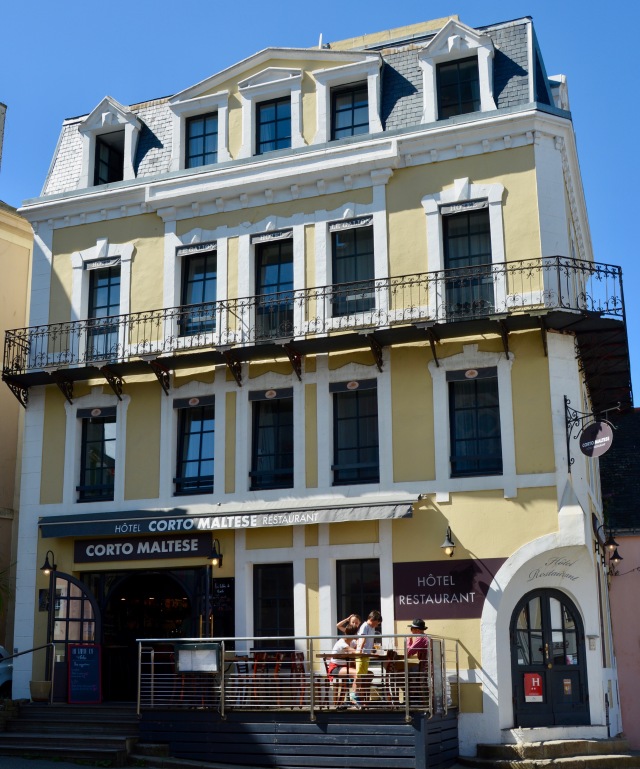 The intersection by the church was full of riches with the interestingly named restaurant Corto Maltese and the Hotel de Ville (city hall) with its attractive facade.  Boris chose a nearby candy store as the first place he wanted to go into and of course he made a purchase-some wonderful caramels in a unique tin.  The proprietress did not speak English and I think Boris enjoyed using his French.  I just pointed and smiled. 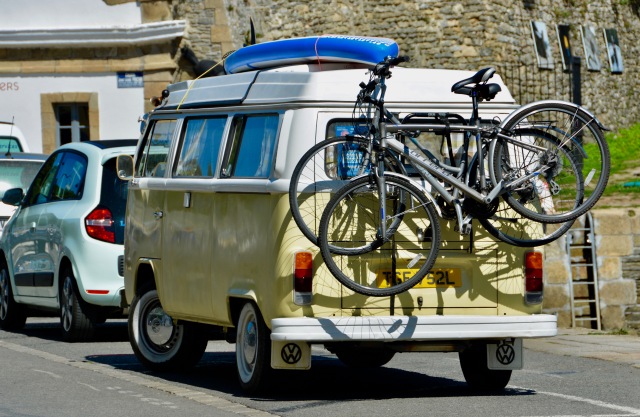 The small city winds around an canal.  There were lots of pleasure boats of varying sizes tied up along the canal.  For some it was wash day, others were restocking supplies, and others had just tied off to explore.  There were lots of people-including families with young children- in town just sitting by the canal and enjoying a picnic lunch (where I would have looked for a grassy area, they enjoyed the harbor walls and the view of the citadel just across the canal). 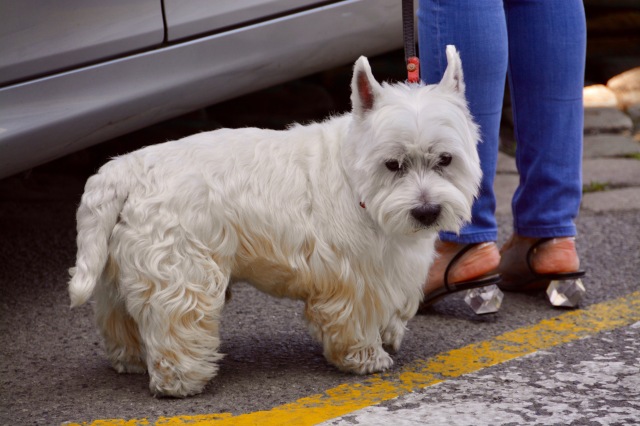 Photo ©Jean Janssen. A Westie! We look for West Highland White Terriers everywhere when we travel to remind us of our own Peabody at home.

Lots of people were on bicycles.  Many others were walking their dogs.  We were excited when we spotted a West Highland White Terrier (think Caesar ads) like our Peabody.  Of course I had to snap a picture.  There was a market in town on this Thursday which was just starting to shut down when we arrived.

Boris was on a mission to find crepes.  There were plenty of places, just not when he starting looking for them.  We rounded a corner and found a nice spot overlooking the citadel and took a seat at one of the outdoor tables.  The citadel can be seen from everywhere in town, from the harbor and canal that runs along it, and even from our cruise ship at anchor.  It is now a museum.  A walking bridge across the canal gets you there. Photo ©Jean Janssen. Cider on Belle Isle with a view of the citadel.

Brittany is too wet to produce grapes for wine, but they do produce a lot of apples and consequently cider.  We started with two glasses of cider. Boris spent a lot of time discussing the traditional crepe for Brittany with the server.  I just went with the special-strawberries, hazelnuts, whipped cream and ice cream.

The crepes came out as big buckwheat cakes.  Yum!  I definitely out-ordered Boris.  We found out later than this is the place the locals recommend.  Boris was proud of himself for stumbling upon it.

Photo ©Jean Janssen. Must be a local artist on Belle Isle that makes these metal creatures. We saw them at the entrance to the citadel as well.

Around the corner numerous sidewalk cafes lined the street facing the harbor.  Some served wonderful large seafood platters like we the one we had in Bruges.  If we had come in for lunch, that would have been my pick.

Sunset on the deck as we left Belle Isle

Having made the circuit, we headed back to the tender to return to the ship.  Belle Isle is a lovely island.  There is more to see if you have the time and oh those beautiful beaches!  Belle Isle would be a wonderful place to come stay and relax for a few days or a week.

I am a retired attorney who loves to travel. Several years ago I began working on a Century Club membership achieved by traveling to 100 "foreign" countries. Today, at 49 years of age the count is at 82. Many were visited on land based trips. Some were cruise ports. Some were dive sites. Most have been fascinating.
View all posts by travelbynatasha →
This entry was posted in cruises, international, Uncategorized and tagged Azamara, Belle Isle, Brittany, Crepes, France, Le Palais. Bookmark the permalink.

1 Response to Belle Isle: A little bit more of Brittany