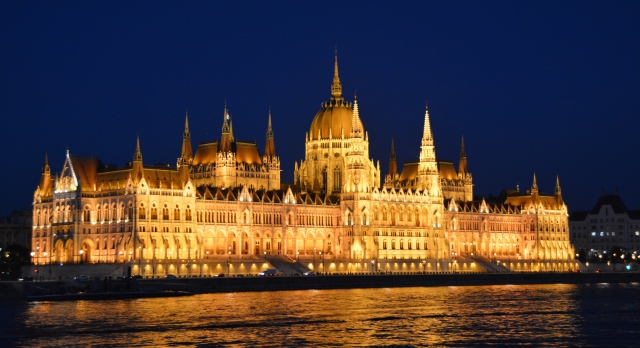 Because of the problem with my foot we were unable to participate in some of the cool tours that Uniworld is offering as alternatives to the panoramic tour.  You could go on a walking tour of the city, including the Market Hall which is fascinating and a ride on the subway.  Since I have never been on the Budapest underground, this would have been my choice.  You could also do a bike ride around the city.  I don’t ride much, but for those that do this is also an excellent way to experience the city.

Photo ©Jean Janssen. Headed up castle hill, these are the steps leading up to the Fisherman’s Bastion and St. Mathias Church, Budapest

Having been to Budapest many times, see Highlights of Budapest, I wasn’t sure how much of what I was going to see would be new.  However, it was interesting to me to see how much the city has been cleaned up (buildings) and restored.  We started as most do by going to the Buda side of the Danube to the Castle district.  Our bus dropped us off and we wandered in with the guide.  On my first trip to Budapest, this is the area where we stayed in the Hilton which was incorporated into the ruins of a Dominican Monastery.

As we headed toward the square and the church passing museums, shops, and cafes, our guide pointed out her recommendations on where we might spend our free time in the castle district.  We waited in the shade while she bought our tickets to view the inside the church and walk along the walls of the Fishermen’s Bastion.

On my first visit to Budapest, the church was closed.  I saw the interior the next time, mostly black with scaffolding around as the restoration was in progress.  Last time, we finally saw it with the restoration of the interior complete.  Seeing it now, all clean on the outside and with color restored on the inside I am glad for those earlier visits so I can appreciate how much work has been done to get it to this state.  St. Mathias Church is over 700 years old and the site of many coronations.

Photo ©Jean Janssen. Trinity Square, St. Stephen’s Statute, and the Fishermen’s Bastion that replaced the castle walls which once stood at this spot.

Photo ©Jean Janssen. View of the Danube, Pest, St. Stephen’s Basilica, and the Chain Bridge from the Fishermen’s Bastion, Budapest.

After the interior visit, we walked along Fishermen’s Bastion and took in the views of Pest and the Danube.  We then had free time to explore the Castle District.  I bought a few gifts and then made it to the store where they sell hand-embroidered items.  According to our guide, there is only one of these shops left in the castle district; the others have been replaced by those selling cheaper, machine made knockoffs.  I also missed the Herend store that sold my pottery, although the fine pieces are still available. 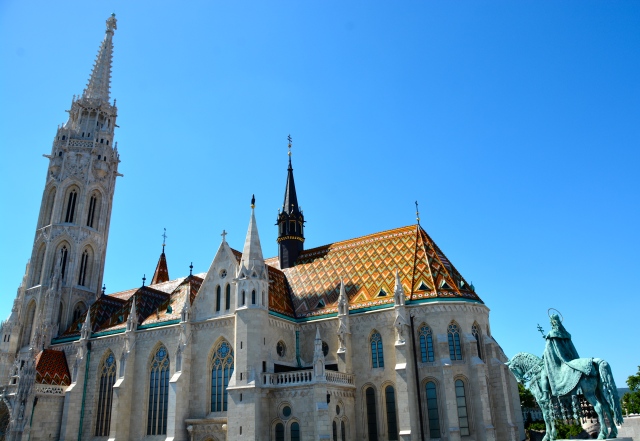 Photo ©Jean Janssen. Looking along the Fishermen’s Bastion and down the steps on Castle Hill. The Danube is in the distance.

Boris bought a huge bow with a quiver and arrows.  I have no idea how we are going to get this home.  It is too long for my large rolling duffle bag and too delicate to be checked.  However he does it, Boris somehow gets this stuff home, although not always in pristine condition.  Leaving the Castle District, we saw wonderful public transport options for residents and visitors alike. 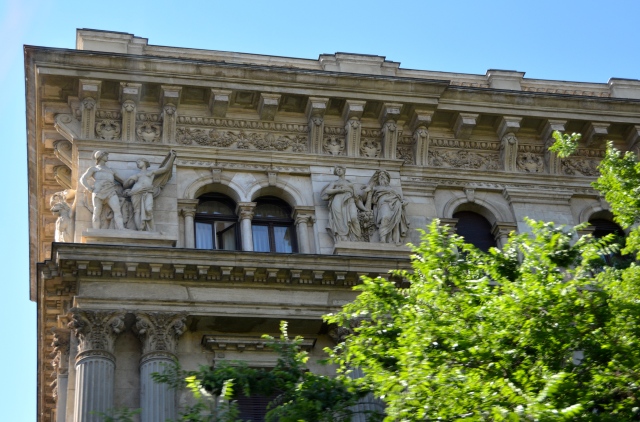 Photo ©Jean Janssen. Beautiful architecture is all over the city of Budapest, now clean and restored to its former glory.

Back on the bus, we crossed back over the Danube to the Pest side (the castle district is on the hilly, Buda side).  These were once two cities.  For most of the rest of the tour, my pictures were taken from inside the bus so please excuse the glare and reflections off the glass.  I pointed out the highlights along the Danube in my previous post.  For the rest of our bus tour, we drove through Pest. 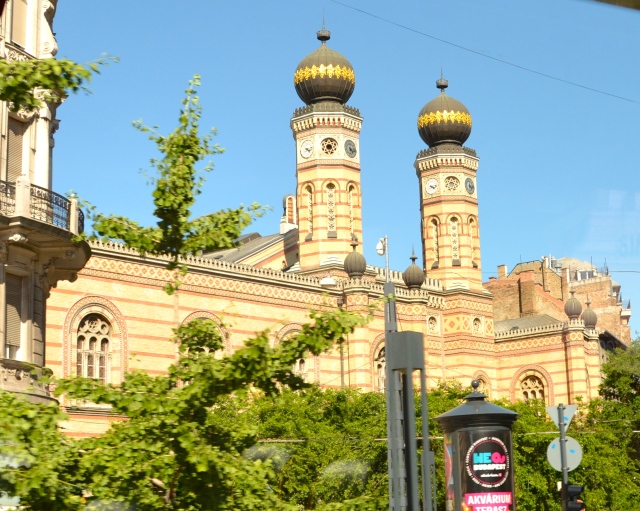 We passed by many of the city highlights we have toured on previous visits to the city like the Dohany Street Great Synagogue and the Hungarian Jewish Museum; the beautiful Opera House; and my favorite museum in the city, the House of Terror.

Photo ©Jean Janssen. House of Terror Museum, Budapest. Home of the Nazis and the Communist Secret Police and now my favorite museum in the city.   It is an interactive, modern Museum that is very well done

We drove through the city enjoying the beautiful architecture.  Each visit we see more of the city restored.  We made our only other stop of the afternoon at Hero’s Square.  You can also reach the square by metro; the M1 metro line opened in 1896 and is one of the world’s oldest lines.  Hero’s Square sits at the entrance to the city park and includes the Millennium Monument to commemorate the 1000th anniversary of the Magyar conquest  of 895.  It was dedicated a year late in 1896, but was not full completed until 1929.  It is one of the most visited spots in the city.

Photo ©Jean Janssen. Detail on some of the statuary on the Millennium Monument, Hero’s Square, Budapest.

We had to dodge some pretty serious traffic that travels around the square to reach the monument from our bus.  As always, there were lots of tourists at Hero’s Square.  Some Japanese women were taking staged pictures with scarves; I am not sure exactly what it was supposed to look like.  There was also a group of young, partially-clothed men on a beer bike that made a stop at the square (although I think it was to use the toilet across the street in one of the museums).  We have these drink bikes in Houston-pedal while you tour and consume alcohol-but I have never seen one with a whole beer barrel on the front.  According to our guide, the barrel is full when they start. 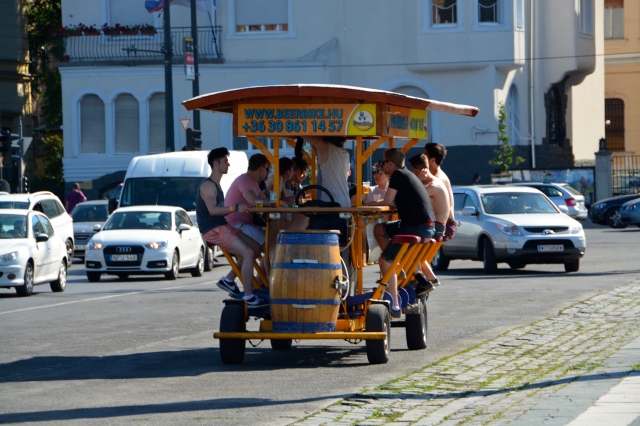 Returning to the bus, we toured the beautiful city park, home to many museums, the Budapest Zoo, the Vajdajunyad Castle, and the famous bath houses.

When visiting the bath houses, you can use a co-ed facility or the single-sex options.  Most bath houses are moving to co-ed.  Traditionally, in the single-sex facilities, the bathers do not wear a swimsuit, although wearing swimsuits is on the rise.  On single-sex days or in same-sex sections, men are usually handed drawstring loincloths and women apron-like garments to wear.  The thermal baths are indoors.  Some of the baths in Budapest offer outdoor areas with waterfalls and whirlpools.  The facilities often offer spa services.

The 18-pool Szechenyi Bath in the City Park is open every day of the year.  The facilities are co-ed and a swimsuit is required.  Just before leaving the park, we passed by the Vajahunyad Castle and the ice skating rink with a new concert facility nearby.  We had come full circle and were now back at Hero’s Square.

We once again passed by the avenues of beautiful architecture and marveled at the restoration that has taken place in this city. 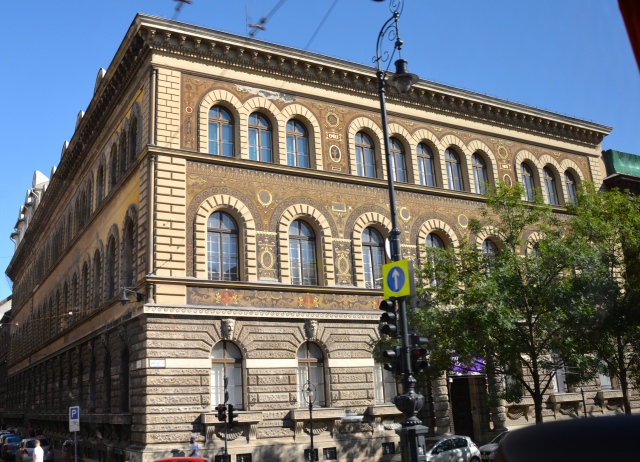 Before retuning to the ship, we passed by some of the buildings on the waterfront which we saw from the Fisherman’s Bastion on Castle Hill.  We also passed by a street leading to St. Stephen’s Basilica.  Then it was back to The Whale where we left our bus and returned to the ship to finish our packing.  We have to leave our bags out at 3 am and be ready to depart the ship at 3:45 in the morning for our early flight.

There was one more folkloric performance on board; this one from an Hungarian troop featuring musicians, singers, and dancers.  Afterwards is dinner before we head up to the sun deck for our twilight tour of Budapest on the Danube.

We were at the table with Carl and Lyle and Carl’s parents and the matte d’ asked if we minded if another person joined us.  He was traveling alone and was rather shy.  We were surprised because it was the last night of the cruise, but I thought perhaps someone from the next sailing had been able to come aboard early.  To our surprise, the “shy single gentleman” was the captain.  He is not shy or single. 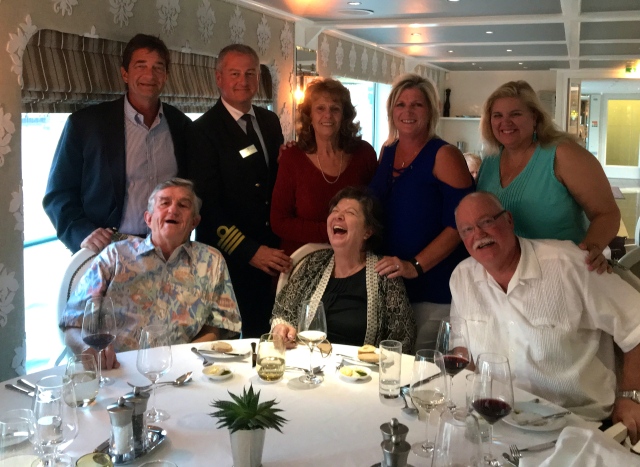 Our table with the Captain

Carl, Lyle, and his parents are in suites and the Captain had missed an earlier dinner with them so I am sure this is why we were singled out.  It was interesting to hear about his early naval training under the communist regime.  He clearly thinks the current training is not strict enough.  When I asked about how me met his wife, with a sly smile he commented on how a tall, handsome naval officer in a white uniform always attracted a lot of young ladies.  Boris told him that the last a captain that had flirted with this wife had sunk his ship.  (He is talking about the time I met the Costa Cruise Line Captain that had run the Concordia aground and then abandoned ship.)

Natasha with the Captain

We left the dock while we were still at dinner and twilight had just come.  Just before we reached the Parliament building we went up to the Sun Deck and I took pictures of the views of Budapest from the Danube.  As it was our last night, we stayed up late and enjoyed the beautiful evening and the lights of the city.  It was enchanting. 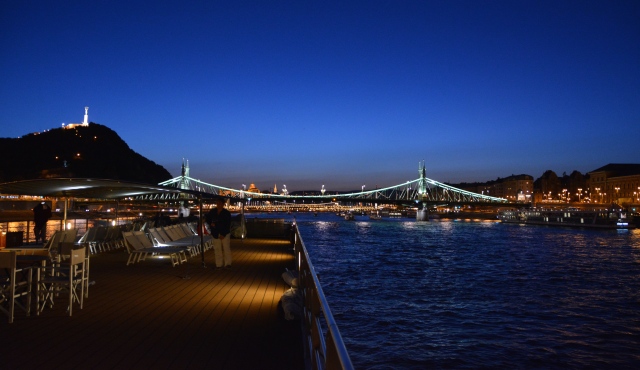 I highly recommend a tour of these Eastern European cities and the cruise of the Danube (particularly the Iron Gates).  I would go sooner rather than later before they lose that distinctive character and become westernized.  Today, you can still experience a taste of that history that has shaped their world view. –Natasha

I am a retired attorney who loves to travel. Several years ago I began working on a Century Club membership achieved by traveling to 100 "foreign" countries. Today, at 49 years of age the count is at 82. Many were visited on land based trips. Some were cruise ports. Some were dive sites. Most have been fascinating.
View all posts by travelbynatasha →
This entry was posted in cruises, international, River Cruise, Uncategorized and tagged Budapest, Hungary. Bookmark the permalink.