Posted on December 3, 2013 by travelbynatasha

I slept in a little late this morning.  Ok, I had to be on the bus at 9 and I woke up at 8:20 am still needing a shower, breakfast, and to pack my day bag.  I made it, wet hair shoved in my hat.  We will take a bus tour of the city, eventually stopping in the castle district in Buda and the Christmas market in Pest.

We first passed a building I noticed when we first drove in. This brand new building, a glass structure made to look like a whale, sits atop a brick warehouse from the 19th century.  The building is supposed to focus on culture, but so far its focus has been on drinking per our guide.

Underground entrance in Budapest. This city had the second underground line. The first was in London and powered by steam. Budapest’s was electric.
©Jean Janssen

We passed down the lovely avenues of Pest, noting the efficient tram system and the beautiful buildings.   We passed the Jewish quarter, seeing the large attractive brick Synagogue, and the fashion district.  Our guide recommended a return visit to the Jewish Quarter to see the inside of the Synagogue and visit the “ruins bars”.  Young people moved into the area and set up bars in the ruins, often in the courtyard of a Synagogue.  Today, they happily coexist. 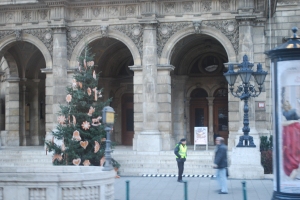 The opera house survived the war and as we passed we saw the guarded Christmas tree out front decorated with large-scale Gingerbread ornaments.  We saw St. Stephen’s the large Catholic Cathedral with a dome to rival that of the parliament building.  There was a small Christmas market and ice-skating rink at the church.  All the trees along the avenues had lost their leaves, but were decorated with “fairy” lights and must be a spectacular sight at night. 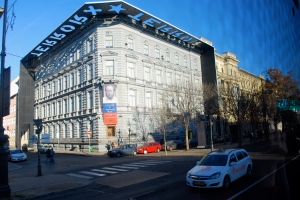 A Monday, all the museums were closed.  We passed the Terror Museum, the former Nazi headquarters and later home to the Soviet KGB in Hungary.  We visited this museum the last time we were here and I must say it is very well presented, one of the best modern museums I have ever visited.  You start at the ground level and follow the history chronologically as you go up each floor.  At the top, you take an elevator to the basement were the interrogation rooms and cells are located.  A film shown during the slow ride down sets the mood.  Excellent.  The museum so impressed Rocky that he wrote about it in his college admission essays. 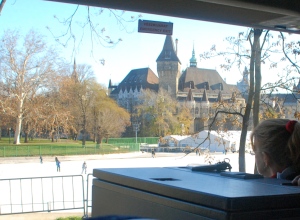 Eventually we made it to Hero’s Square with its imposing monuments.  It sits at the end of the avenue on the edge of a park where the thermal baths are located.  There is also a fairytale-like castle with a large ice-skating rink out front that can accommodate 1700 skaters.

Next we drove over the famous chain bridge with its imposing lions.  Legend has it that the sculptor realized his error in not remembering to carve tongues in the lions’ mouths on the day of the dedication and was so distraught that he jumped into the river. On the opposite side of the Danube is Buda.  Immediately after crossing the bridge you see the funicular to the top of the castle district near St. Matthias’s Church.  Our bus took us closer and we walked the short distance to the church.  Last time we were here we stayed at the Hilton next door.  The church was under restoration then.

It is a lovely church with restoration just completed.  Heat has also been added.  When the Turks occupied Buda it was a mosque and the Ottoman influence is reflected in the decoration.  The viewing platforms surrounding the church courtyard offer excellent views of Pest, particularly the Parliament building.  I ran into a couple I sat next to on the plane and took a picture of their group.

Returning to the bus, we drove back to Pest to visit the Christmas market, still in its infancy.  I expected lots of Christmas ornaments, but it was mostly food and handicrafts.  Boris and I both bought hats-mine felt fashion, Boris’ in a style worn by the Hungarian kings.  I got some wonderfully decorated gingerbread cookies and a beautiful ornament made from cornhusks.  Boris and I both sampled the hot, spiced wine and the local sausage.  There was a huge advent wreath in the market square as well as a huge Christmas tree just at the end of the shopping street.

Back on board, we had a late lunch of Hungarian specialties including goulash.  I had another glass of wine.  After lunch, Boris headed out to the Roman ruins and I decided to rest a bit before going out to grab some more pictures and visit the historical market.  Ah the best made plans…I fell asleep for two hours and woke up as it was getting dark (between 3:30 and 4 pm at this time of year).  No more wine at lunch for Natasha.

The Parliament Building at night on the Danube, Budapest.
©Jean Janssen

In the evening, the boat was finally moved and we left Budapest on the Danube passing once again the amazing buildings-the castle, St. Matthias’s’ Church, the Parliament Building-that face the river.  I was bundled up on the “freeze” deck and then came down to change for the Captain’s welcome and gala dinner.  I wore a simple cocktail dress, but most people did not dress up at all.

The Chain Bridge with St. Matthais Church in the background as we cruised out of Budapest at night.
©Jean Janssen

More wine at dinner so I am sleepy again.  (I didn’t promise not to drink in the evening.)  We bid Hungary goodbye and welcome Slovakia in the morning.

I am a retired attorney who loves to travel. Several years ago I began working on a Century Club membership achieved by traveling to 100 "foreign" countries. Today, at 49 years of age the count is at 82. Many were visited on land based trips. Some were cruise ports. Some were dive sites. Most have been fascinating.
View all posts by travelbynatasha →
This entry was posted in cruises, international, River Cruise and tagged Budapest. Bookmark the permalink.

1 Response to Highlights of Budapest