The Iron Gates on the Danube

Today is one of scenic beauty as we cruise the Iron Gates, a series of gorges in the Danube River that separates Romania and Serbia.  Yes, Natasha is about a gain another country.  This is the longest series of gorges in Europe.  The gorges also separate the Carpathian Mountains and the Balkans Mountains.  Given our western direction on the Danube, we will first pass through the two-lock system at the Dam.

The dam (or more accurately a series of two dams) is not without controversy.  Several settlements were permanently lost due to the construction, as well as the Isle of Ada Kaleh.   The primary purpose of the dams’ construction was to provide hydroelectric power to the two countries the dams border (originally Yugoslavia and Romania, now Serbia and Romania).  In fact one of the eeriest parts of the passage was when we were directly under the power lines; the buzzing was intense.

Photo Jean Janssen. Heading into the first lock. Note the electric power lines above the lock. The dam was built to generate hydroelectric power.

We were expected to reach the dam between 7 and 8 am.  It takes about an hour and a half to go through the locks.  I woke up in plenty of time but opened the shades to note the beginning of the low barriers and realized that at 6:20 am we were a lot closer than I anticipated.  I threw on some clothes, put my hair in a clip, and headed up to the sun deck with my camera. 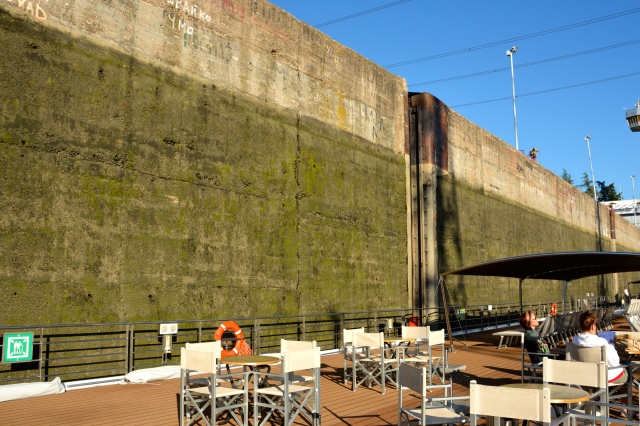 Photo ©Jean Janssen. Within the lock.

Photo ©Jean Janssen. In the lock, note the difference in water levels.

The dam is huge.  Although I have been through many locks large and small, I think this is the only time I have been through a double lock system.  My first lock experience was as a child when I went through the Soo/Sault Locks between Ontario, Canada and Michigan in the US.  The Sault Locks allow for boat traffic to travel between Lake Superior and the lower Great Lakes.

Photo ©Jean Janssen. Looking out my Juliet Balcony on the River Beatrice, I took this picture showing how close the ship sits to the lock wall.

This double lock system means we will rise before traveling into the second lock,  repeat the process, and ultimately rise about 115 feet. Depending on your arrival time, you may be in locks on the Romanian or Serbian side.  We are going through a Serbian lock.  As with most locks, it is shocking how close you get to the side when you pass through.  Our cabin faces the Serbian side and we were right against the lock wall. 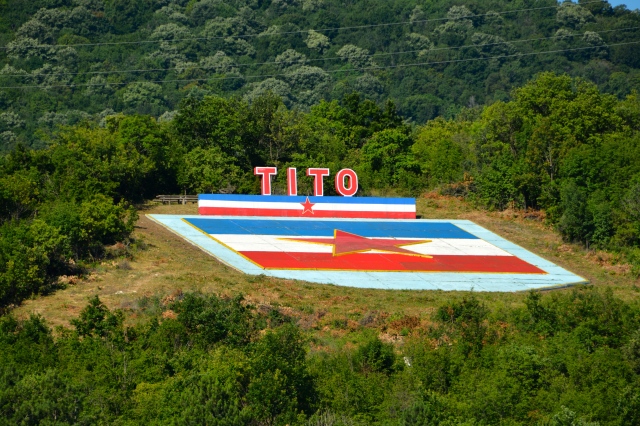 Photo ©Jean Janssen. Homage to the long dead communist leader of Yugoslavia on the Serbian side of the Danube at the Iron Gates Dam. The paint color was bright enough that it caught our eye from a distance (this shot is taken with a zoom lens) and that the memorial continues to be maintained.

Given our early arrival at the dam, I felt fortunate to have seen the entire passage from the sun deck (except for that one intentional trip to the cabin to get the lock wall picture).  We will reach the most scenic part of the Iron Gates in about an hour, so it was time to grab breakfast.  I ordered the wonderful Uniworld eggs benedict and had a couple of mimosas.

Photo ©Jean Janssen. Plaque commemorating Trajan’s Bridge over the Danube on the Serbian side of the River. I got this great shot from the Juliet Balcony of our cabin on the River Beatrice.

When I headed back to the cabin to grab my camera, what a surprise I got.  Commentary had already begun upstairs (we are ahead of schedule) and looking out the window I spotted one of the famous landmarks along our Iron Gates route.  We were at the Great Kazan, the most famous and narrow of the Iron Gates gorges where Roman Emperor Trajan ordered a bridge be built across the Danube.  Constructed in the years 103 to 105, the bridge created passage and allowed for the final conquest of Dacia, the ancient name for what is now Romania.

Photo ©Jean Janssen. Rock Carving of the Dacian King who opposed domination by the Roman Empire on the Romanian side of the Danube. It was carved between 1994 and 2004.

Not wanting to miss anything, I headed back up to the sun deck.  Keeping the festivities going, our new friends from Tomball (just outside Houston), Carl and Lyle, ordered more champagne and the mimosa morning continued.  At the small Kazan, a rock carving of the Dacian King Decebulas, constructed between 1994 and 2004, who opposed Trajan is found on the Romanian side of the River.  The rock carving of Decebulas is 131 feet high and the tallest rock sculpture in Europe.

Photo ©Jean Janssen. The Great Kazan in the Iron Gates on the Danube. Just off-center to the right is the Mraconia Monastery. 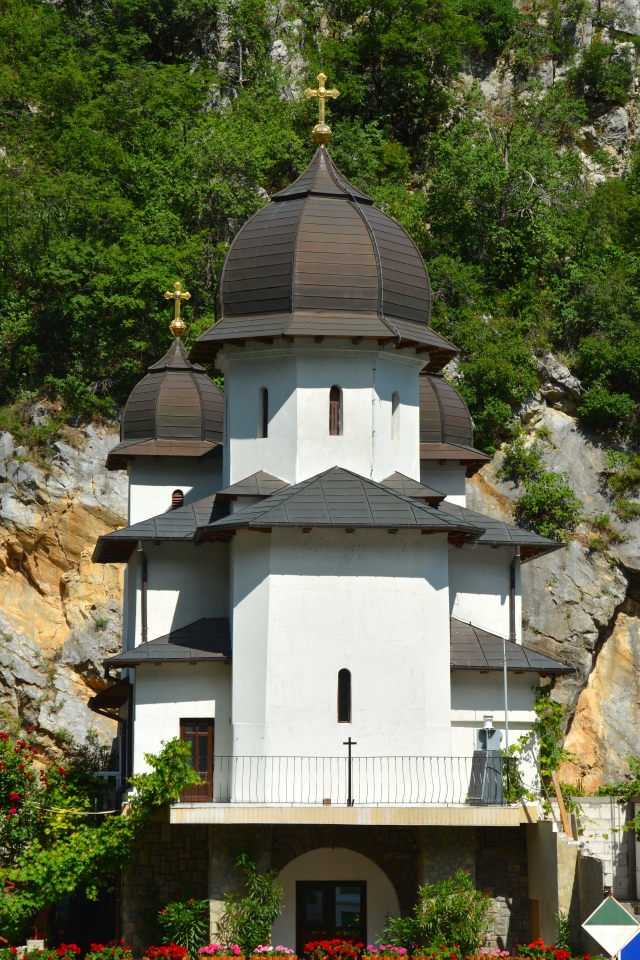 Photo ©Jean Janssen. River view of the Mraconia Monastery on the Romanian side of the Danube in the Iron Gates.

At the Great Kazan, we also saw the charming Mraconia Monastery and the road that wraps around the Danube.  On either side of the Iron Gates gorges are the national parks maintained by Romania and Serbia.

Photo ©Jean Janssen. Romanian roadway (note the car) wrapping around the Danube through the Iron Gates.

Farther in our journey we spotted many caves in the Rock formations.  The largest cave on the Danube, Ponicova, is located within the Iron Gate gorges.  We saw boats at the large entrance and at a dockside opening with stairs.  The Ponicova Cave is accessible by water or by land.  It was a beautiful, relaxing morning cruising the gorges.

Photo ©Jean Janssen. Dockside entrance to the cave system along the Danube in the Iron Gates.

Photo ©Jean Janssen. There was lots of tourist travel at the water entrance to the Poricova Cave in the Iron Gates of the Danube. It is on the Romanian side.

Once the Iron Gates were behind us, we had lunch at prepared for a short stop at a Serbian town of Donji Milanovac.  Locals had come out with embroidered linens for sale, as well as some local wines.  We got off the boat and wandered through the town.  I walked up to the Orthodox Church where I was warmly greeted by the young priest who welcomed us in. He was burning incense and was playing recorded chanting.  He had the door to the altar open, although the entrance was blocked.  It was probably the only opportunity I will have to see an Orthodox altar which is generally hidden. 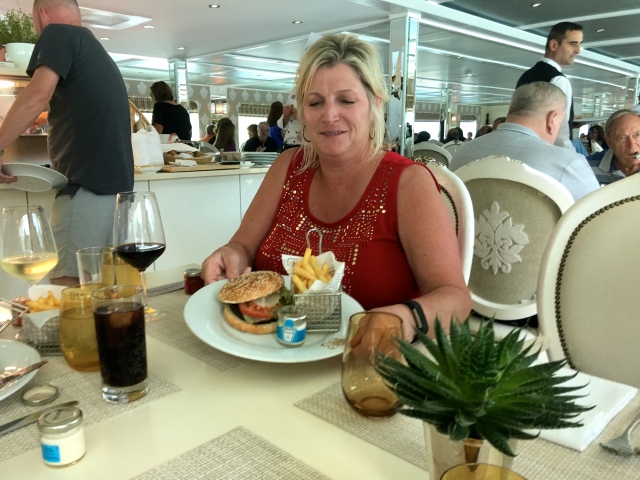 Photo ©Jean Janssen. We were missing our burgers, so Carl ordered them for us for lunch. Lyle presents the all American burger. 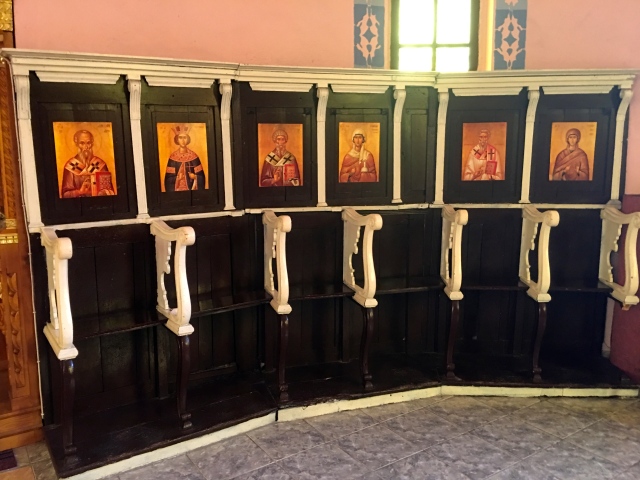 Photo ©Jean Janssen. Most visitors to an Orthodox church will never see the altar. 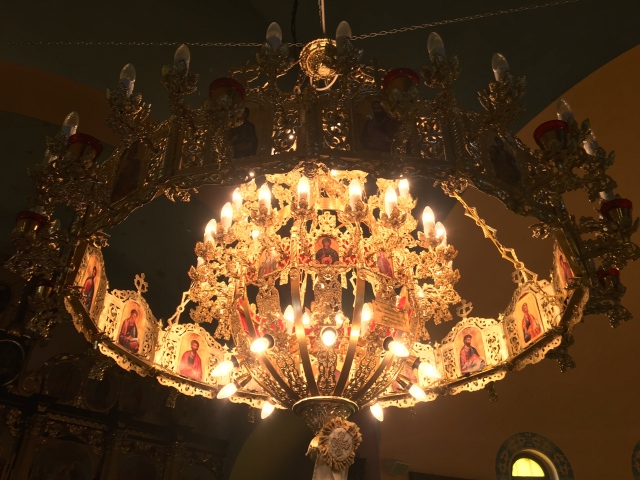 Photo ©Jean Janssen. Note the lovely icons inside the chandelier in the Serbian Orthodox Church.

Some of the ship’s guests and a fair number of the crew went ashore in Donji Milanovac.  Although all our food and drinks (including alcohol) are free on board, people still tried the local bars and  Serbian beer and wine.  I have already been to several of the Eastern European countries on this itinerary when we cruised the Black Sea and Hungary on land-based trips and other river cruises.  However, this is the first time I have been to Serbia.  Natasha is now been to 120 countries.

Photo ©Jean Janssen At our first stop in Serbia, Donji Milanovac, the locals brought out their handmade linens and homemade wine to sell. 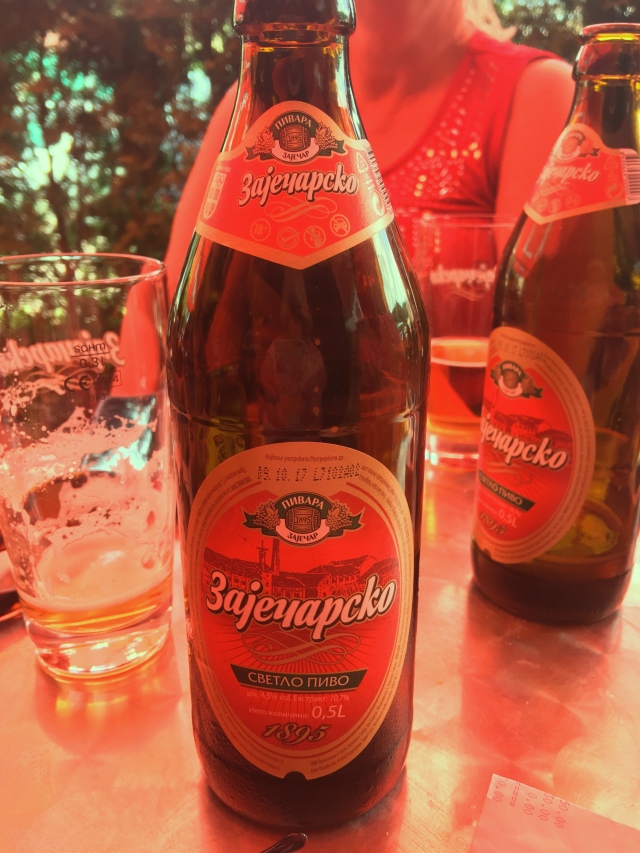 Boris of course had to make some purchases in town.  I did pick up a few handmade linens; Boris got a shirt and some wines.  Carl and Lyle invited us to a wine and cheese party on the upper deck after we left the dock, but I decided to cool off in the cabin first.  I fell asleep for several hours and only woke up in time for dinner.  Not sure if it was getting up so early, the heat, or the five mimosas I had that day.

Photo ©Jean Janssen. Boris shows off some of his Serbian purchases.

Photo @ Jean Janssen. The Serbian countryside as seen from the Danube.

Tomorrow we visit the Serbian capital of Belgrade and venture back to Yugoslavia, a country that no longer exists.  …and we’ll travel in style, Yugoslavia in a Yugo.

Photo ©Jean Janssen. Inside the Iron Gates on the Serbian side.

I am a retired attorney who loves to travel. Several years ago I began working on a Century Club membership achieved by traveling to 100 "foreign" countries. Today, at 49 years of age the count is at 82. Many were visited on land based trips. Some were cruise ports. Some were dive sites. Most have been fascinating.
View all posts by travelbynatasha →
This entry was posted in cruises, international, River Cruise and tagged Dacia, Danube, Donji Milanovac, Gorges, Great Kazan, Iron Gate Dam, Iron Gates, Mraconia Monastery, Ponicova, Romania, Sault Locks, Serbia, Soo Locks, Trajan's Bridge. Bookmark the permalink.