A Rock Castle in Bulgaria 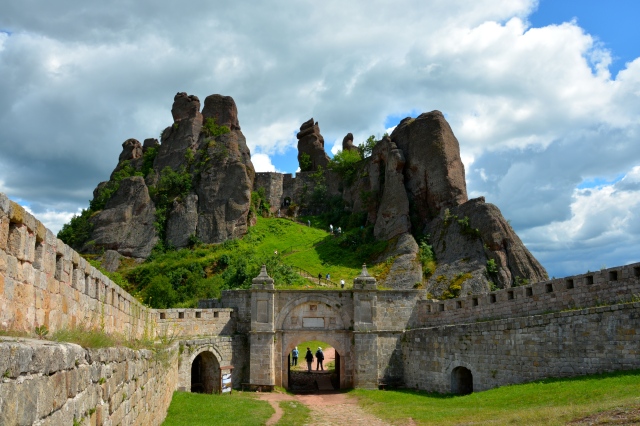 Today we are docking in Vidin, Bulgaria on the Danube.  We have two touring options, both included with our cruise.  You can take your passport, cross a bridge back into Romania, and go to a cultural center with food and wine options.  We chose the alternative option and stayed in Bulgaria to visit some famous rock formations.

Photo ©Jean Janssen. Coming into the city below the fortress. Belogradchik, Bulgaria.

We don’t dock in Vidin until 1 pm, so it was a lazy morning for me and I lingered over a late breakfast.  It was a great catch-up after yesterday’s full day of touring.  The ride out to the rock formations is about an hour through the green Bulgarian countryside.  This region is known for its agriculture, particularly the vineyards.  As we head into the mountains, we leave the Carpathian Mountains behind and see the Balkans ahead. 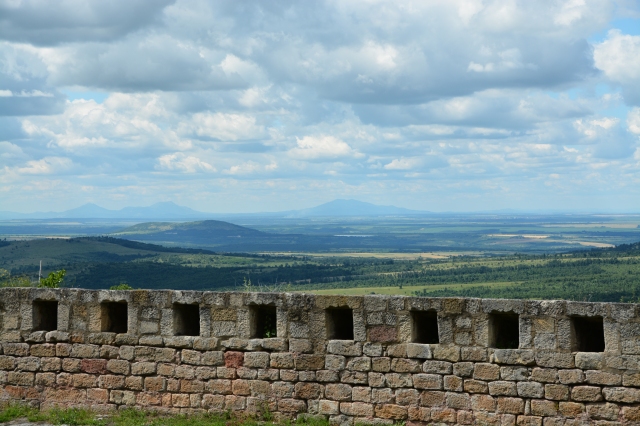 Photo ©Jean Janssen. View of the Balkans and the rock formations from the hotel terrace.

This was the Germans’ route to Turkey.  The Bulgarians tried to remain neutral during WWII.  With the threat of invasion and the promise of new lands, the Bulgarians did sign with the Axis powers, but did not participate in the invasion of Yugoslavia.  Their young leader was summoned to Berlin to explain his actions.  He died only a week later after returning from Germany; many believe he was poisoned.

We made a comfort stop in the town of Belogradchik, which translates to small white city.  The people like to white wash their houses and use red tiles on their roofs.  Once again we enjoyed some Bulgarian pastries.  Belogradchik is an important stop on the rail lines that connect Vidin with Sofia, the country’s capital.  From the hotel terrace we had lovely views of the rocks, formed some 230 million years ago.  People often see faces or an animal in the rock formations. 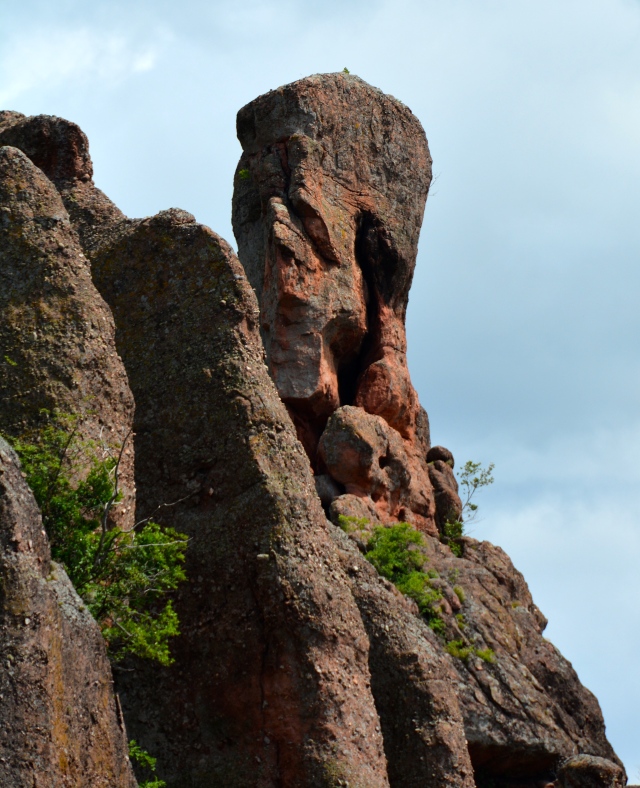 Photo ©Jean Janssen. I see a face in these rock formations.

This is when Natasha has to fess up that she has had to be a little less adventurous on this trip.  I tore a tendon in my right foot and although I have a brace I am limited when it comes to extended walking or climbing.  I am having surgery as soon as we get home.

Photo ©Jean Janssen. Within the second gate, the schoolchildren made the climb look easy.

Photo ©Jean Janssen There are tunnels through the walls in the lower formations, Belogradchik Fortress, Bulgaria.

To see the fortress, there are four levels.  You go in through the first gate and see the later fortifications.  From here our guide gave us a brief history.  Going through the second gate, you arrive at the long, winding staircase to the older fortress.  This is as far as I could go.  Once you reach the fortress at the top, there is another shorter climb to even more spectacular views.  People told me that I did make the right call on the stairs; they were a bit treacherous.

Photo ©Jean Janssen. Boris takes off toward the fortress (without a camera).

Even from below the views were breathtaking and I personally thought the most marvelous shot was looking up at the imposing castle.  The fortress only has constructed walls on two sides, the natural rock formations serving as the remaining walls.  The original structure was built during the 1st-3rd centuries when this part of Bulgaria was part of the Roman Empire.  It was originally used as a hideout and for surveillance.  It was not until the 14th century that additional fortifications were built outside the original structure.

A view from above. Belogradchik Fortress

Photo ©Jean Janssen. With the “newer” fortifications in the foreground. Belogradchik  Fortress, Bulgaria.

Boris hit the souvenir booths outside the fortress walls and then it time for our bus ride back to the River Beatrice in Vidin.  Vidin is located in the Northwestern part of the country near the border with Serbia.  This is the poorest part of the country.  Danube- based industry has not done well here since the fall of communism. 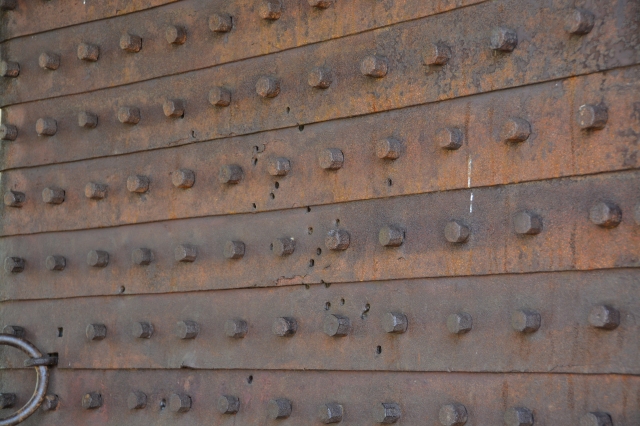 Photo ©Jean Janssen Bullet holes in the metal doors in the second gate at the Belogradchik Fortress. 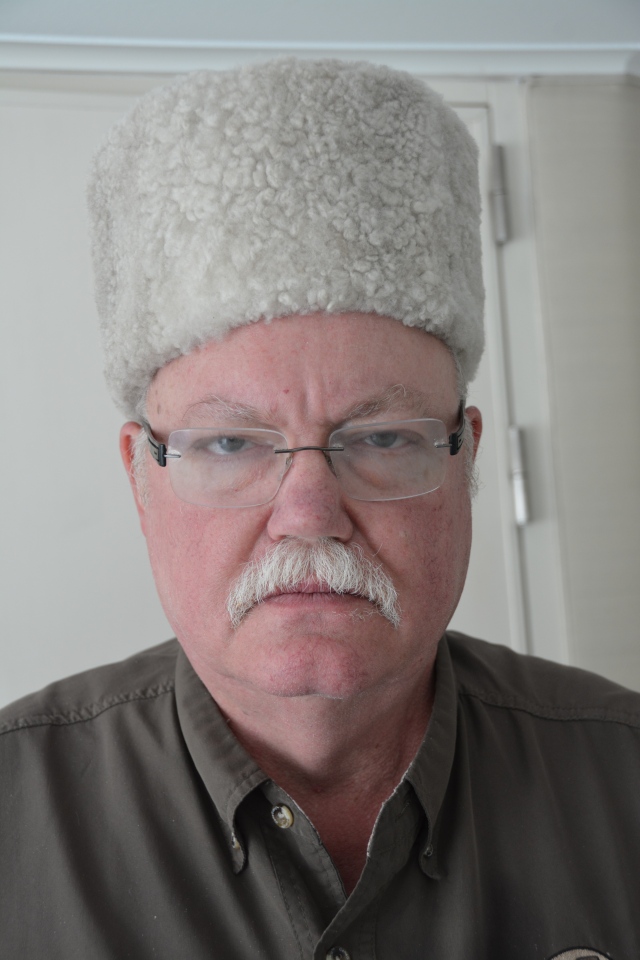 Upon our return there was a performance by young Bulgarian dancers.  Unfortunately, they performed with their backs to the uncovered lounge walls which meant it was hard to get a good picture.  After their performance, we had a yogurt demonstration, Bulgaria being one of the larger producers of the culture.  They also supply cultures for many of the Greek yogurts.

Photo ©Jean Janssen. Bulgarian Children performed for us on the River Beatrice.

Tomorrow will be an early morning as we sail through the locks and then scenic sailing through the Upper and Lower Kazen, the most beautiful section of the Iron Gates. 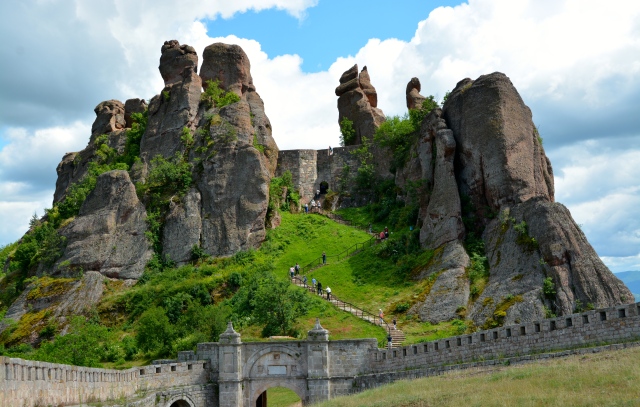 I am a retired attorney who loves to travel. Several years ago I began working on a Century Club membership achieved by traveling to 100 "foreign" countries. Today, at 49 years of age the count is at 82. Many were visited on land based trips. Some were cruise ports. Some were dive sites. Most have been fascinating.
View all posts by travelbynatasha →
This entry was posted in cruises, international, River Cruise and tagged Balkan Mountains, Belogradchik, Belogradchik Fortress, Bulgaria, Carpathian Mountians, Danube, River Beatrice, stork, Uniworld, Vidin. Bookmark the permalink.

2 Responses to A Rock Castle in Bulgaria