St. Thomas in the US Virgin Islands and a First Order Invasion

Posted on March 9, 2017 by travelbynatasha 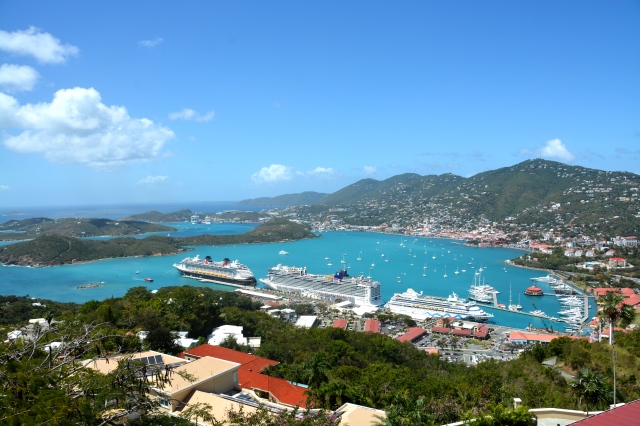 A view of the Harbor in St. Thomas as seen from Paradise Point. ©Jean Janssen

Having been to St. Thomas many times, we decided not to book an excursion.  I highly recommend the beaches on St. Thomas, Magen’s Bay being perhaps the most popular.  It is a rather interesting ride out there too.  You don’t necessarily need to book an excursion, there is plenty of local transportation to and from the beaches.  You can rent chairs and umbrellas and purchase food and drinks at the beach.  There is an admission charge.  For US visitors, you also have the advantage of not having to exchange currency.  Just be sure you give yourself plenty of time to get back to the ship.

Another wonderful option is hopping the ferry to St. John’s and enjoying Trunk Bay, which I have done on several visits.  This is a perfect spot for snorkeling.  St. John’s is much quieter than St. Thomas, 2/3 of the island is a National Park.  While St. Thomas is the land of the franchises (as our guide on Tortola referred to it), St. John’s is more about discovering nature in a serene setting.  That’s today.  Before the islands were conquered by the Dutch West Indian Company, this was a notorious pirate outpost.

All those red roofs on the bottom of the photograph? Shopping, Shopping, and Shopping at Havensight Mall on St. Thomas. ©Jean Janssen

St. Thomas is perhaps the first major Caribbean shopping port and still offers a variety of shopping opportunities.  There is lots of strip center shopping right near the cruise pier, but serious shoppers will take a cab to downtown to visit the long established locations.

Another view from Paradise Point in St. Thomas, US Virgin Islands. ©Jean Janssen

Not setting an alarm, it will come as no surprise to those of you following this series of blog posts that Rocky and I overslept.  We have a 4 pm departure from St. Thomas which meant I really didn’t want to leave the beach any later than 2 pm.  We wouldn’t have had much time, so we grabbed a snack on board and then left the ship to try the St. Thomas Paradise Point Skyride.  It was a beautiful sunny day and I am sorry we missed the bay with such perfect beach weather. 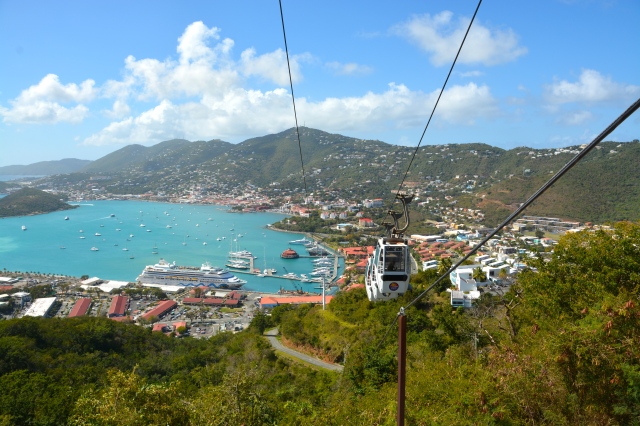 If you are docked at the main cruise terminal, Havensight Mall Dock, also known as West Indian Company Dock, you can just walk over.  I say that because 2 of the 5 large cruise ships in town that day were not at this dock.  They had a pretty significant cab ride over.  We looked for the base of the sky ride and just followed that to the ticket window.  The ticket price is $21 or $10.50 for children.  We could purchase tickets from Guest Relations on the ship or at the ride itself for the same price. 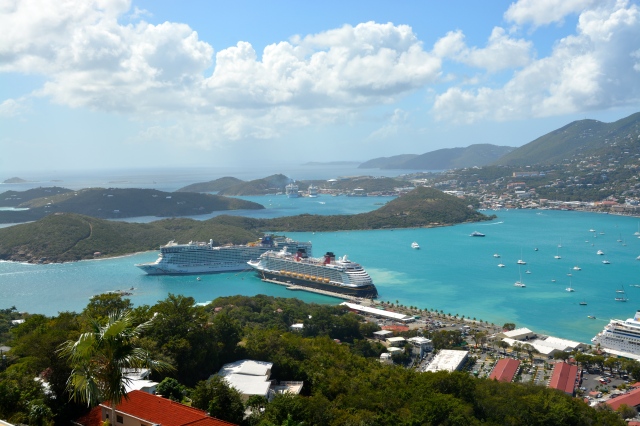 The Norwegian Epic was also in Tortola yesterday. Like yesterday, they left earlier than we did. You can see how the boats churn up the sand in the bay. In the distance you can see the two other cruise ships docked at a more remote location. ©Jean Janssen

There are some stairs up to the loading platform, but they offer chairs to sit in while you wait for the ride.  They travel in sets of three cars and during our visit they were putting about 6 adults in each car.  It was a fairly quick ride up to the top where there are restrooms, a few gift shops, and a restaurant and bar.  This is all about the view and the opportunity to take pictures.

We ran into some people we had met on the ship who had snagged a table right by the railing and joined them for drinks.  The specialty here is the Bushwacker and according to Rocky it will put you under the table.  I tried a drink that tasted like a Key Lime pie; there wasn’t much alcohol in it.  After our friends headed back to the ship, we moved to their side of the table and enjoyed the view.  We ordered some nachos and margaritas and hung out until about an hour before the ship was scheduled to leave. 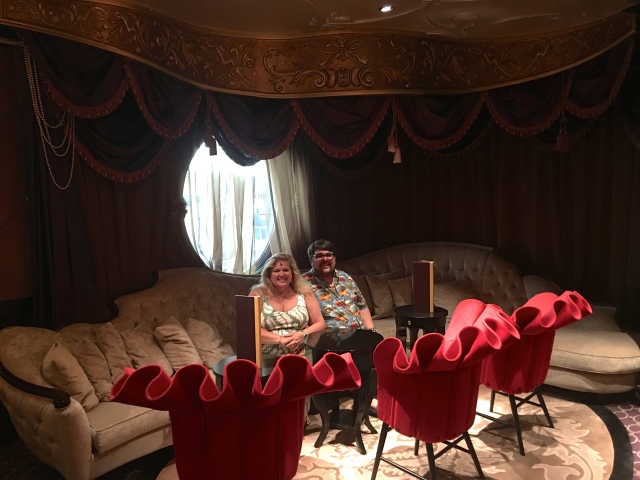 We were a little too early for the opening of the Ooh La La Champagne with its boudoir decor.

Back on board we took showers and then went to Mass as it is now Lent.  Then we checked out the character greetings in the Lobby and the Bars in Europa.  I didn’t give up alcohol for Lent.  La Piazza with its carousel bar, O’Gills Pub, and Ooh La La Champagne Bar all carry their themes out well.  We were too early for drinks, so we went out on the deck and watched the sun set.

Tonight’s show is by Hypnotist Ricky Kalmon, by some reports one of the two best shows on the cruise.  Rocky and I were not really intrigued by a hypnosis show, but we did head over to see the Character Dance Party in the atrium before dinner.

We are back in the Animator’s Palate tonight and I stand corrected regarding my assessment of this restaurant being not as much fun as the Animator’s Palate on the Wonder.  Tonight was great.  When you arrive, you create your own character which is whisked away by the servers before dinner.  I thought we would see them again up on the screens.  It was so much more than that.  Throughout dinner, they played scenes involving food from Disney movies and cartoons.  At the end, they show a film featuring our drawing as animated characters. Really clever.  Each of us was a given a certificate and our names appeared in the credits at the end of the film. 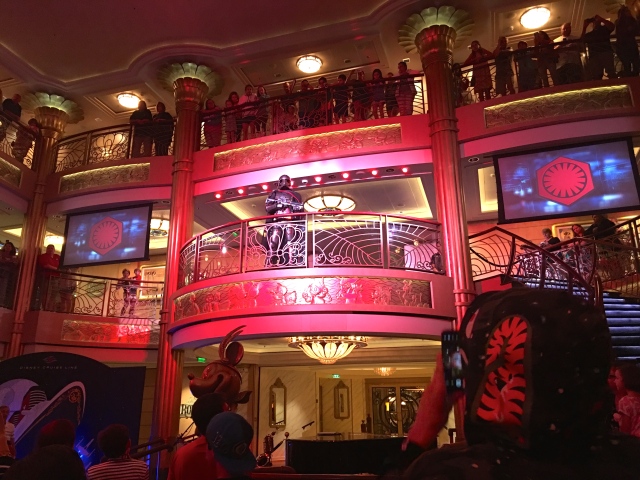 Phasma appears to announce the First Order invasion of our ship and the search for the Regal Spy from the balcony above the atrium in the Disney Fantasy. ©Jean Janssen

At the end of dinner, our head waiter told us to head out to the atrium for a not to be missed event.  Additional lighting had been added and then over the ships intercom, it was announced that the First Order had invaded our ship.  The Phasma character from Episode 7:  The Force Awakens then appeared on the Balcony to announce they were searching for a rebel spy.  Her stormtroopers filtered through the guests on levels 3,4, and 5 conducting their “search”.  It was a simple gesture, but it set the mood for the day ahead.  By walking through the crowd, they engaged everyone in the Star Wars event.  The day ended with the crowd excited about the coming Star Wars Day at Sea. 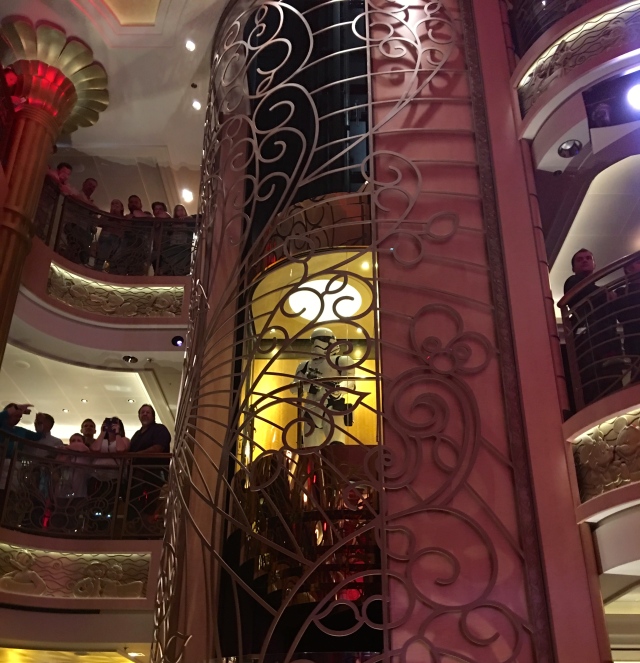 Stormtroppers filtered through the crowds at all levels of the atrium searching for the Rebel Spy on the eve of the Star Wars Day at Sea aboard the Disney Fantasy. ©Jean Janssen

We get an hour back tonight, so Rocky and I went to the late night showing of the Force Awakens.  We are very excited about the day ahead. 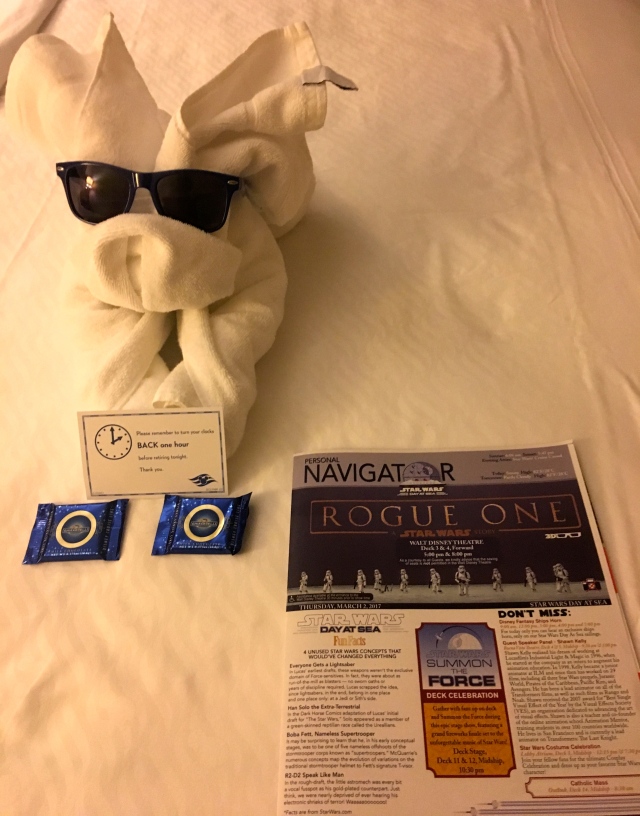 The anticipation is building for the Star Wars Day at Sea. ©Jean Janssen

I am a retired attorney who loves to travel. Several years ago I began working on a Century Club membership achieved by traveling to 100 "foreign" countries. Today, at 49 years of age the count is at 82. Many were visited on land based trips. Some were cruise ports. Some were dive sites. Most have been fascinating.
View all posts by travelbynatasha →
This entry was posted in cruises, Disney, international and tagged Disney Fantasy, Paradise Point, Skyride, St. John's, St. Thomas, Star Wars Day at Sea, US Virgin Islands. Bookmark the permalink.