Tortola in the British Virgin Islands and a Pirate’s Life for Me.

Posted on March 8, 2017 by travelbynatasha

We have been so bad about sleeping late that we bit the bullet and scheduled an early (7:30 am) beach excursion for today.  I am not sure if I have ever been to Tortola before.  We ordered room service (only Continental breakfast offerings on this Disney ship) and met our group in the theater.  It is mostly families with children which perhaps explains why they give a full 15 minute delay before they actually escort us ashore to our boat.  Unlike some ships where the tour information is in the daily program, you must refer to your tour tickets for place and meeting times.  Once on the excursion boat, we had a 45 minute ride over to White Bay and the beach on the island of Jost Van Dyke. 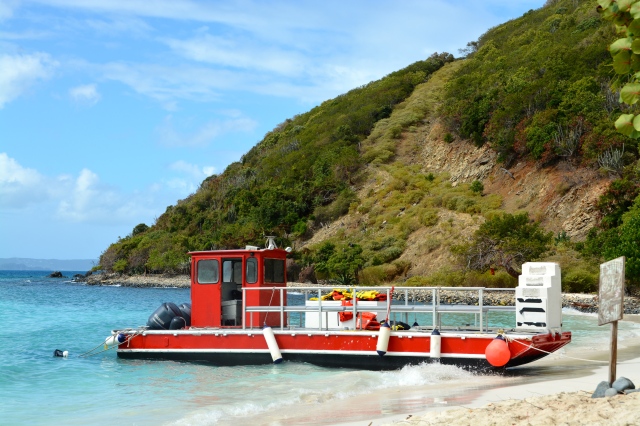 This barge transferred guests from the boat through the shallows to beach at White Bay on the island of Jost Van Dyke in the British Virgin Islands. ©Jean Janssen

The outside seats on the boat were fun, but you should count on a little spray.  Just as we arrived it also started to rain.  Most of these showers are light and don’t last very long.  Just outside the shallow section of the beach, the boat stopped and a barge came over to take us to shore.  It took three trips to get everyone there.  You walked a ramp to reach the beach and could totally avoid the water if you wanted to.  They also required you to wear a life vest on the barge to travel the very short distance to shore.  I would have rather hopped off the boat and just walked in, but I am sure this barge service is someone’s livelihood. 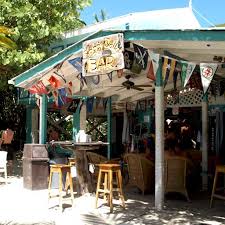 We settled in on some lounge chairs under the palm trees.  This half day excursion will put us back at the ship around lunch time.  The famous Soggy Dollar Bar is a short walk down the beach from our chairs.  The bar is the birthplace of the painkiller, a rum cocktail, and got its name from patrons from boats who would wade ashore with soggy money to buy their drinks back when there was no road or dock to reach the bar.  There is a road now, but still no dock.  Our savvy shipmates figured out that you could also get a painkiller at the bar a few steps away from our beach chairs and at a cheaper price than at the Soggy Dollar.

From our beach chairs on Jost Van Dyke, we could see the islands of St. Thomas and St. Johns. ©Jean Janssen

Jost Van Dyke Island is actually the smallest island, at 3 square miles, of the four main islands that make up the British Virgin Islands.  The rumor is that the island is named for a Dutch Privateer (and sometimes pirate), Joost van Dyk.  Van Dyk assisted the Dutch Admirals who attacked San Juan, Puerto Rico and plundered the Spanish Treasure Fleet.  The Spanish retaliated by attacking Tortola, which is when van Dyk fled to the island that now bears his name.

Jost Van Dyke has less than 300 residents (298 in the last census).  Its main industry is tourism, particularly yachting tourism.  The beach at White Bay was fabulous with beautiful sand, few shells, and crystal clear water.  You could wade right into the shallow water bare-footed.  I actually spent quite a bit of time in the water.  The rain would come and go, but it didn’t deter us. 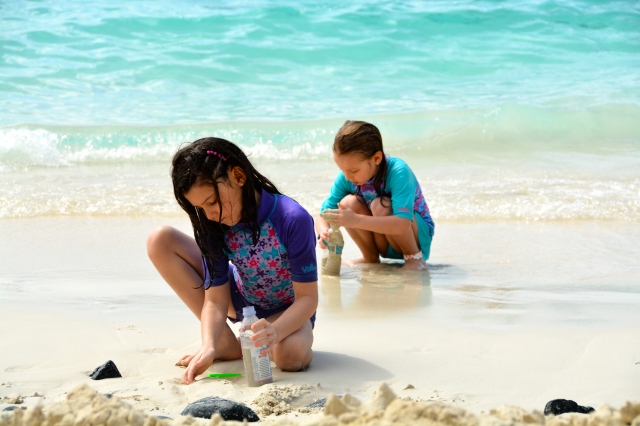 I really don’t like to wear headphones at the beach because I enjoy the sound of the water, but I was tempted today.  Rocky put his on.  The children loved the beach, but there was lots of screaming.  There were also a lot of parents enjoying their painkillers and not doing much to supervise their children.

The ariel search before diving in for fish. ©Jean Janssen

Perhaps my favorite pastime on the beach, in the water and out, was watching the pelicans and other seabirds dive into the water to feed.  Sometimes they completed submerged themselves. 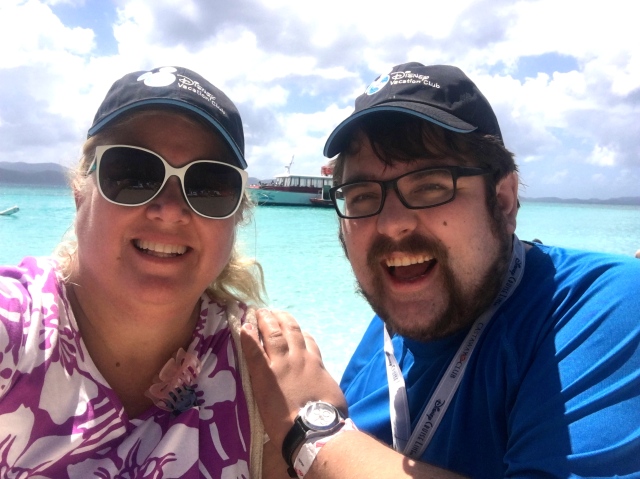 Natasha and Rocky at White Bay on Jost Van Dyke Island just before heading back to Tortola. ©Jean Janssen

All too soon, our excursion was over.  I thought it might be too long a day, so we did not go for the full day option which included lunch (primarily because of cost and the fact they said that umbrellas were not available).  I wish we had chosen to stay the full day.  The food did smell good.  We had to reverse the process of the two boats to get back and frankly I think we spent more time in transit than we did on the beach.

Our view of Tortola from the Cabanas buffet aboard the Disney Fantasy was beautiful. ©Jean Janssen

Once back, we went to the ship for lunch.  Rocky decided to take in an afternoon movie.  I decided to check out the Caribbean’s newest shopping port.  There were lots of cute, typical Caribbean shops a few steps from the pier.  Most were smaller than in other cruise ports and those with promotional offers had been cleared out by the morning shoppers.  I did use the slow, but free, internet to check on a few things.  I got back in time to meet Rocky for the movie.

I should mention that another popular excursion was to Virgin Gorda.  The Virgin Gorda excursions were sold out before Rocky and I booked the cruise.  Virgin Gorda is the second largest of the British Virgin Islands.  “Christopher Columbus is said to have named the island ‘The Fat Virgin’, because the island’s profile on the horizon looks like a fat woman lying on her side.”  The most popular tourist spot is the baths where granite boulders form grottoes, tunnels, tidal pools, and arches.  Swimming and snorkeling in the area is popular. 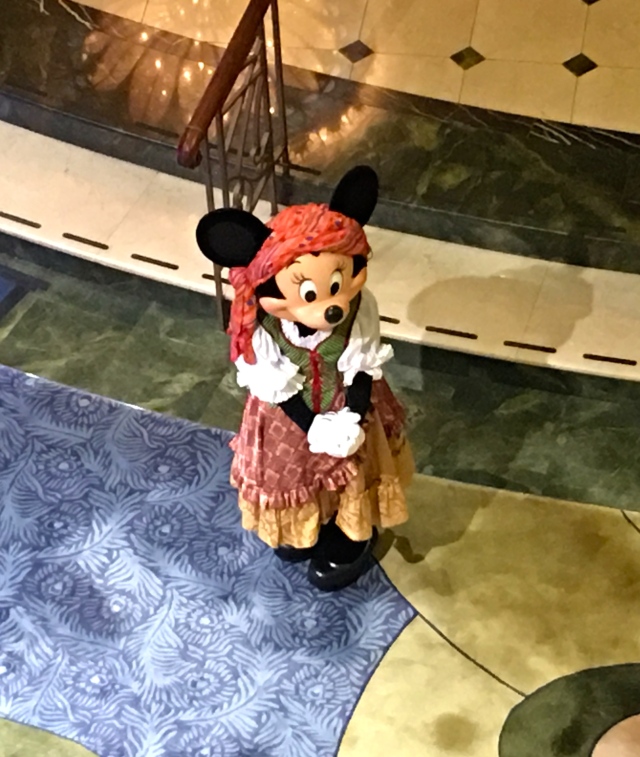 Minnie Mouse in her pirate attire aboard the Disney Fantasy. ©Jean Janssen

Goofy dressed up for Pirate Night aboard the Disney Fantasy. ©Jean Janssen

Tonight we are back in the Royal Court for dinner and it is also Pirate night.  This is a popular celebration on all of the Disney ships that sail in the Caribbean.  We enjoyed Pirate Night on our last Disney cruise on the Wonder out of Galveston, Texas.  One of the things that I love about the character greetings is that the characters also get into the day’s celebration and dress for the theme.  You can take pictures with Mikey, Minnie, Goofy, Donald, and Daisy every day and they will always look different. 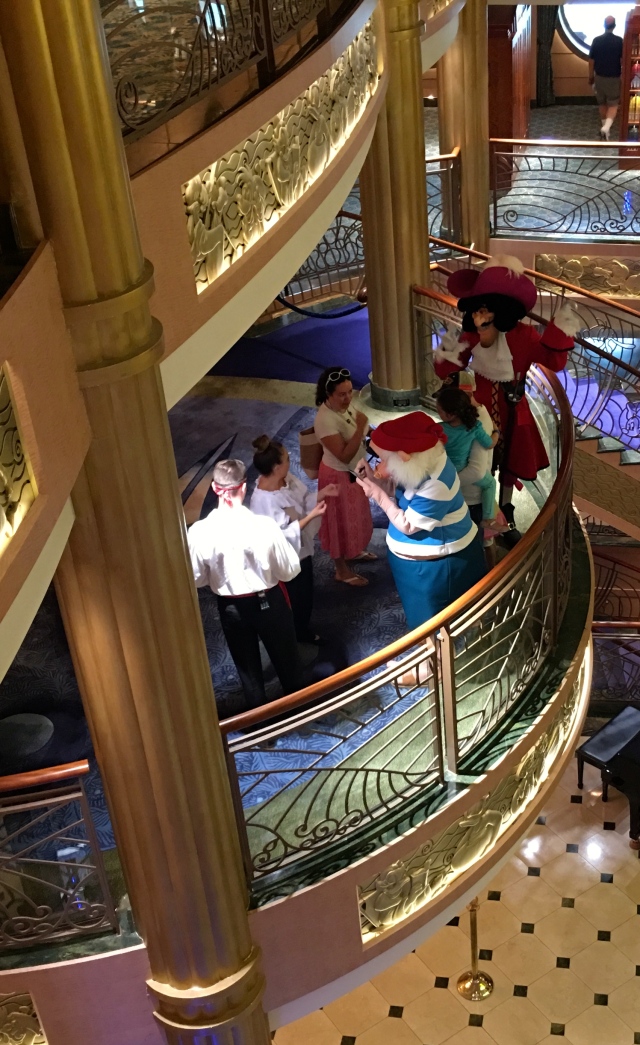 Daisy in her pirate attire aboard the Disney Fantasy. ©Jean Janssen

Pirate Night is also a good time to spot characters like Captain Hook and Smee, Peter Pan, and Jack Sparrow.  It is not only the characters that get dressed up for the event.   Lots of the guests come in full costume.  Rocky did a better job than I did pulling his outfit together.  They will give you a pirate bandana on the ship, so everyone will have a little something.

In addition to the characters being available around the ship, there was a pirate celebration with Mickey on the pool deck between the two dinner seatings and pirate themed games for children and adults throughout the evening.  We started our night with Michael Holly’s full show and learned he started performing as a juggler in Disneyland back in his teens.  For years now he has had a full Vegas show, but retains his Disney connection with the cruise ship appearances.  There was a lot of guest interaction in this show.

There are always special items available to commemorate these Disney events.  Our assistant waiter Graham showed us the special pirate mug with multiple light settings, which he referred to as the rave, slowing down, and morning after settings for our adult only table.  He even offered a special dance.  After having him do the dance three times, I had to buy a mug.

Up on the pool deck aboard the Disney Fantasy for Pirate Night. ©Jean Janssen.

We headed to the pool deck after dinner and it was already full of guests so we stood to see the pirate show on stage, Jack Sparrow’s appearance, and the Buccaneer Blast Fireworks.  Even before the show, I loved seeing the aquaduck all lit up for the evening.  Disney always does a great job with fireworks.  There were the first to do fireworks at sea and are currently the only company providing this type of entertainment. 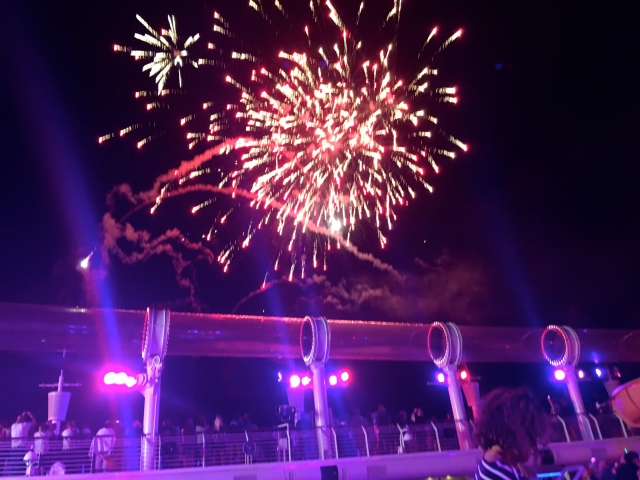 Disney is currently the only cruise line giving you fireworks at sea. ©Jean Janssen

Tomorrow is St. Thomas, part of the US Virgin Islands and a Caribbean port we have visited often. 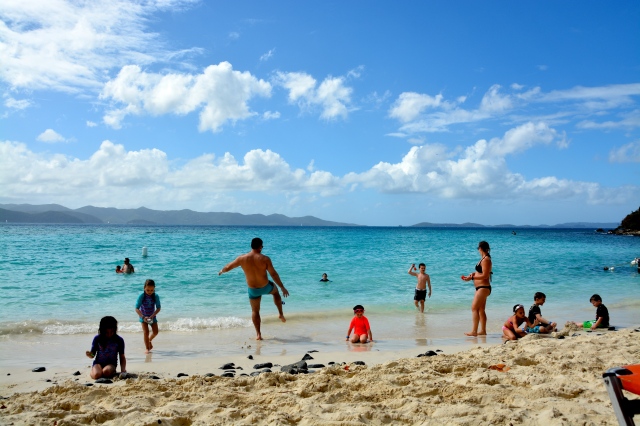 I am a retired attorney who loves to travel. Several years ago I began working on a Century Club membership achieved by traveling to 100 "foreign" countries. Today, at 49 years of age the count is at 82. Many were visited on land based trips. Some were cruise ports. Some were dive sites. Most have been fascinating.
View all posts by travelbynatasha →
This entry was posted in cruises, Disney, international and tagged Animator's Palate, AquaDuck, Disney Fantasy, Enchanted Garden, Palo, Remy, The Tube. Bookmark the permalink.