So you want to be an Italian farmer? and how to eat risotto like the Veneti (Venete)

These residents of Finato Martinati had something to say about your visit. ©Jean Janssen

This morning we can’t venture too far from home because Maria Luisa and Guido, our hosts, have invited us to a traditional Italian lunch of risotto and an afternoon visit to the farm.  We have enjoyed some wonderful food and wine since our arrival and I would expect nothing less from a country that’s food and beverages never disappoint.  We were limited with local options for dinner the night of our arrival and they directed us to a Mexican restaurant.  Not really what we were after our first night in Italy (especially for Texans who are used to excellent Mexican food).  However, like many restaurants here, it was also a pizzeria.  The pizza was perfection.  Rocky hates when I travel to Italy because when I get back I won’t eat American pizza for months.

Our second night (although we had just stocked up at the supermarket), we tried a hotel restaurant in nearby Salizzole, Ristorante Ambassador.  We had wonderful food with a home cooked feel.  There are no menus, but our wonderful server Dennis (his Facebook name), spoke excellent English and translated the verbal menu for me.  I started with spaghetti carbonara followed by a grilled steak with fried potatoes.  Yum.  They served a complimentary antipasti of bruschetta with thinly sliced meat.  There is a basket of breadsticks on the table when you sit down and another basket of bread is brought after you order. Boris followed his pasta with a platter of grilled meats-chicken, pork, and beef.  We had a carafe of the house red wine and several bottles of sparkling water.  Boris closed with coffee with Sambuco and a chocolate dessert with the look of a salami (in fact that is what it is named).  I had a dessert that was a cross between ice cream and whipped cream with fresh peaches in it.  Fabulous.  The bill was less than 60 euros ($64); great price for 4 courses and (some alcoholic) beverages. 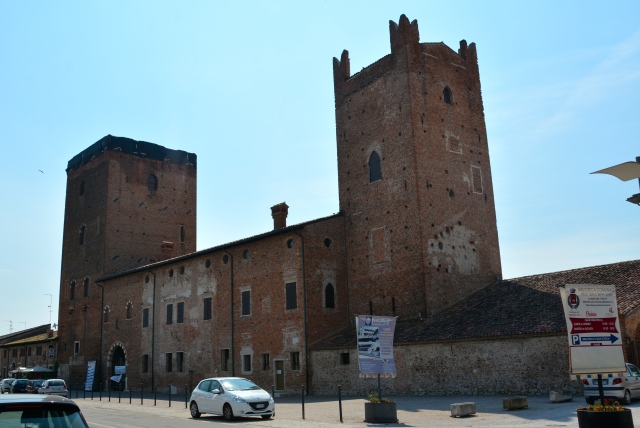 To our surprise, across from the Ambassador Hotel was a wonderful castle.  Just amazing to me that castles are a “dime a dozen” here.  So on this morning with limited time before lunch with our hosts, we decided we would go back to Salizzole and see the castle and also pick up a few things at the grocery store that we realized we forgot (and the reason we have continued to eat out a night).

Butcher shop in Salizzole,Italy specializing in beef and horse. Horse is popular in this region. ©Jean Janssen

As we found out, they do concerts and other performances at the castle, but it is not otherwise open for visits.  Next door was a butcher shop ( look for “macelleria”) and I wanted some ground meat and steaks so we went in.  That was only after I warned Boris not to order any of the shop’s specialty-horse.  It is a very popular meat in this region, but like most Americans I wouldn’t dream of eating it.

After the butcher shop, we drove back through Bovolone, Italy and stopped at the EuroSpin grocery story.  This is a smaller store than we visited in Cerea, but with a little searching and help from the staff we found what we needed.  I picked up some cookies to take with us to lunch.  I didn’t want to go empty-handed, but Guido told us he no longer drinks alcohol so I didn’t want to take a bottle of wine that he couldn’t enjoy. 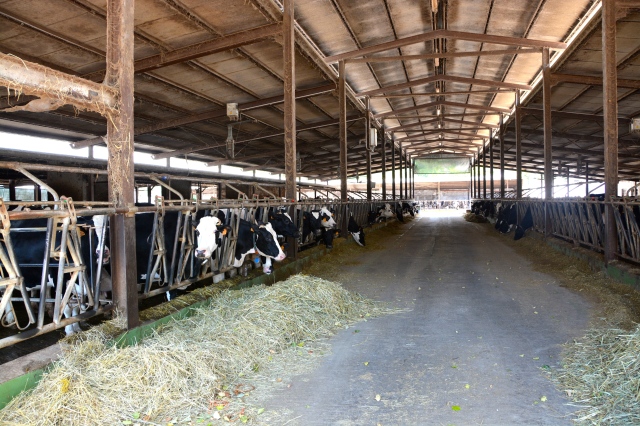 The afternoon highlight was a tour of the farm, including the dairy production. This is one of the animal sheds at the farm. They have over 180 lactating cows and almost that many calves. The barns feature a automatic scraper system for manure removal.      ©Jean Janssen

We made it back in time to get everything put away before joining our hosts.  One of Guido’s cousins is visiting.  He sells real estate in Italy and Germany, particularly Berlin.  He also races sailboats.  We visited with him while Maria Luisa finished lunch and Guido finished his business call.  We all enjoyed our prosecco (a sweet sparkling Italian wine) while we waited.  I was a little left out of the conversation at times because I don’t speak Italian, but I think our hosts enjoyed having an American visitor who could speak their language.  They complemented Boris several times on his command of Italian. 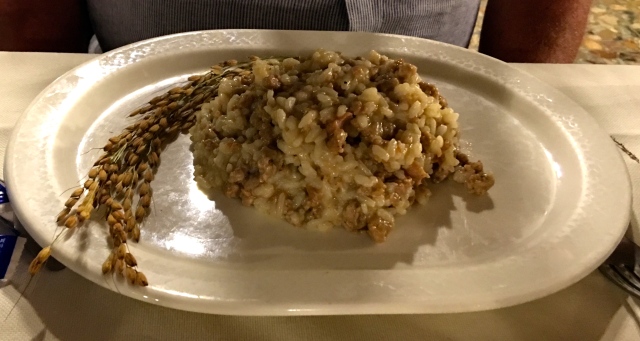 A regional specialty is risotto with meat. Boris has already had this several times on our trip. This lovely presentation is at Ristorante Ambassador in Salizzole, Italy.             ©Jean Janssen

The risotto was fabulous.  The dish is rice made with a homemade vegetable broth to which they added a mixture of cooked pork and veal.  Excellent.  They told us this was a very traditional lunch in this region.  They served bread with it, but I noticed most didn’t eat any bread.  Afterwards they served plates of sliced meats with melon.  I have usually seen this done before the rice/pasta course and they said normally that they wouldn’t have this at lunch.  I think it was a treat for us.

Guido and Maria Luisa are charming hosts.  Guido’s English is limited but we still had an animated conversation.  There are pictures of generations of him and his family all over the villa so you feel like you know him.  Maria Luisa has gone above and beyond to make us comfortable and has been a big help with the luggage and our lack of it.  (For those reading the blog series-this is day 5 of “Luggagegate” with no end in sight.)

Packing equipment for the tobacco. Along the walls are the drying ovens. The other equipment that fills this space is all out in the fields in use. ©Jean Janssen

After lunch, Maria Luisa took us on a tour of the farm.  They produce several crops-tobacco, corn, rice, and soybeans.  I asked her about all the fields of sunflowers I had seen.  They don’t produce any here at Finato Martinati, but some farmers grow sunflowers for the oil.  With the exception of the tobacco, the other crops are grown primarily as feed for their dairy cattle and energy production.  This time of year the crops require attention 7 days a week.  That is true year-round for the cattle who are milked three times a day.

Maria Luisa showed us one of the large drying ovens for the tobacco at Finato Martinati, Concamarise, Italy. ©Jean Janssen

Maria Luisa first showed us the many drying ovens used on the tobacco and the packing equipment.  The technology investment is huge.  I have never seen such large pieces of farming equipment and in such quantity.  The stable items like the ovens numbered over thirty.

The cow manure at Finato Martinati is used not only as fertilizer, but as a part of their production of green energy. ©Jean Janssen

What she is most proud of, and justly so, is a new project started in 2009 to produce green energy.  With their success, they can fuel all the farm equipment and provide electricity for the home and office.  Boris and I are the indirect beneficiaries because unlike some rentals where you pay utilities, ours is included in the rental price. A portion of the energy comes from solar production.  The other is from the biogas plant which uses the cows waste product as its primary fuel (60%) the rest coming from silage (corn and triticale).  The animal manure is also used as plant fertilizer.  It was a pretty impressive operation.

Next we got to visit the dairy operations where the large dairy cows are milked three times a day.  When we are out by the pool we can occasionally hear the cows and depending on the way the wind is blowing, smell them.  They know the routine and will head in for milking when full.  This time of year they are also bathed several times a day to keep them cool.  I was impressed by how clean everything in the area is kept.  A separate entity comes to collect the milk daily.  Maria Luisa said there is an overabundance of milk in the supply market, but you can’t stop the production.  It is not like you can just turn the animals back on if demand increases or foreign supply dries up.

The cows are separated by age and sex in several large hold areas.  The female calves are kept for milk production.  Male calves are sold.  Conception is by artificial insemination by veterinarian.

After visiting the adults and the milking station-where the worker attaches the cow to the equipment and the machinery does the actual milking-we visited the nursery.  We saws twins, which is rare and a concern because it may mean the mother can not have more babies.  We also saw a one day old calf.  They were all pretty cute. 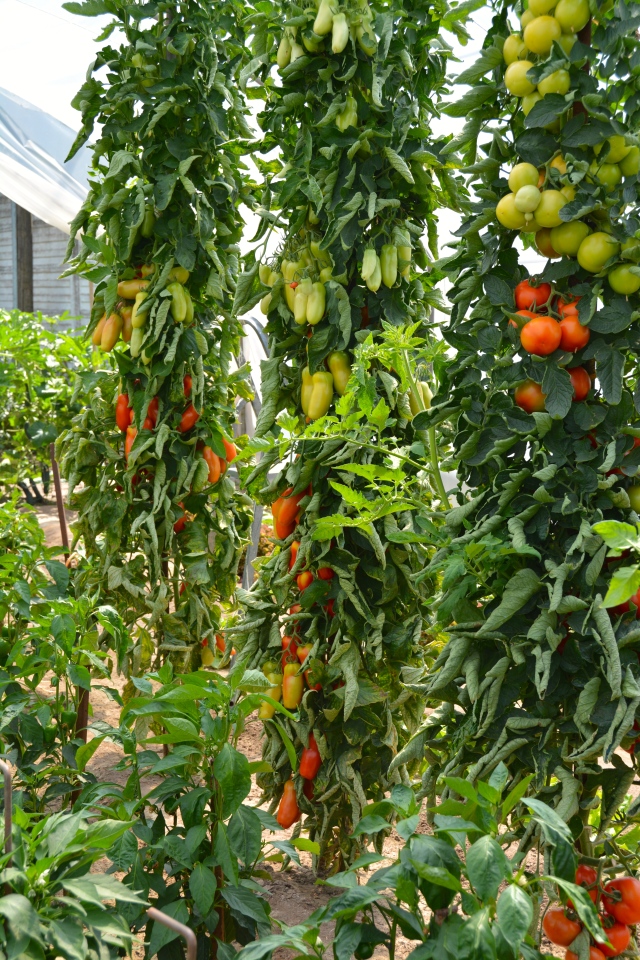 We were going to go out by car to see the tobacco, but it was a really hot day and Maria Luisa suggested we go in the evening sometime.  So we finished our tour with a look at her personal garden and she and Boris “talked shop” about growing crops.  The farm tour was a unique opportunity that you don’t have with many home rentals world-wide.  We enjoyed the experience and found it very interesting. 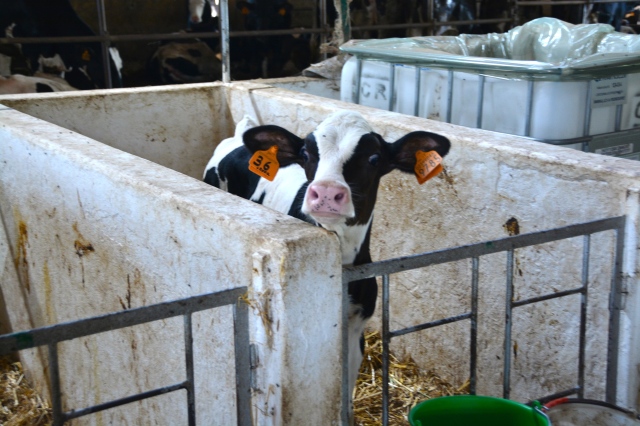 I am a retired attorney who loves to travel. Several years ago I began working on a Century Club membership achieved by traveling to 100 "foreign" countries. Today, at 49 years of age the count is at 82. Many were visited on land based trips. Some were cruise ports. Some were dive sites. Most have been fascinating.
View all posts by travelbynatasha →
This entry was posted in international, Uncategorized and tagged concamarise, Finato Martinati, Italy, Ristorante Ambassador, Salizzole. Bookmark the permalink.