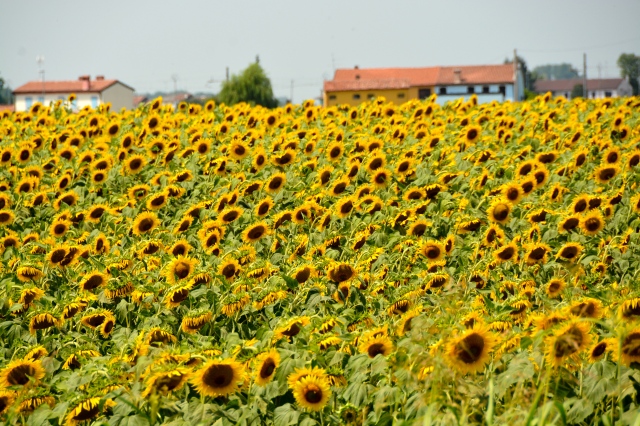 Fields of sunflowers in the Italian countryside. ©Jean Janssen

I was going to start blogging on the day I arrived in my favorite foreign country, Italy, but we had such a rough start I wanted things to settle a little first.  When you have been to 110 foreign countries, it is a little tough to pick a favorite, but I don’t hesitate to tell people Italy when they ask.  I have been here between 15 and 20 times.  The love affair started on my honeymoon when Boris brought me to Italy for two weeks and I saw Rome, Assisi, Florence, San Gimignano, Siena, Venice, and a few other villages in between.  When Boris asked me to marry him, he thought to sweeten the deal.  He asked and before I could get a word out, he announced that he was converting to my religion and he thought we should go to Italy for our honeymoon.  Little did he know… 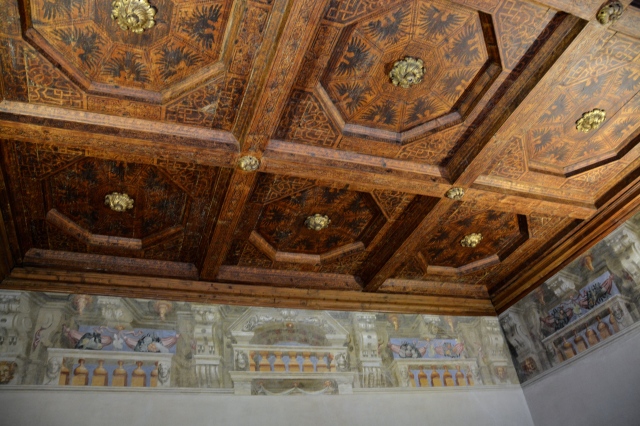 It is easy to get around the major tourists cities here even if you only know English.  However, a couple of years ago Boris started taking Italian lessons for fun.  “We are going to Italy so Boris can practice his Italian!”  Its a great excuse.  His command of the language has allowed us to go places a little farther flung-renting a farmhouse in rural Sicily for example-where English is not widely spoke if at all. 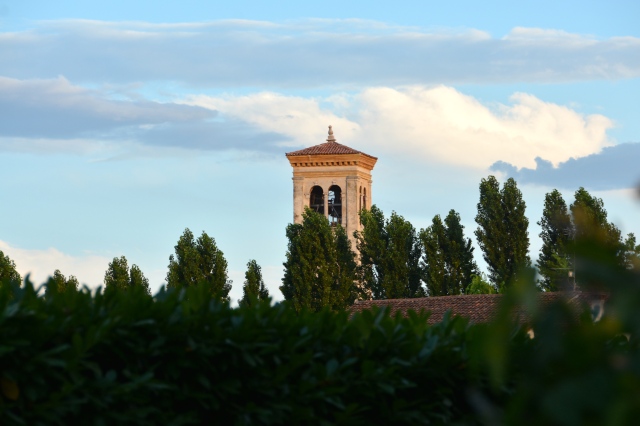 From our villa, we can see the bell tower of the village church. Concamarise, Italy. ©Jean Janssen

This trip we are renting a villa in a village about a half hour south of Verona in northeastern Italy.  The original structure was a medieval tower that has been added on to.  The house sits prominently in the older section of Concamarise, its main gate next to the oldest church in the village.  You can see our front door as you look down the long drive.

We have been to Verona, but hope to explore some of the other specials cities and village nearby less frequented by tourists.  We also enjoy “going local” and getting a feel for what it would be like to live in this country (assuming I could own a villa).  Ok, so I couldn’t afford this as my home, but I can try driving, parking, shopping, drinking, and eating like an Italian. 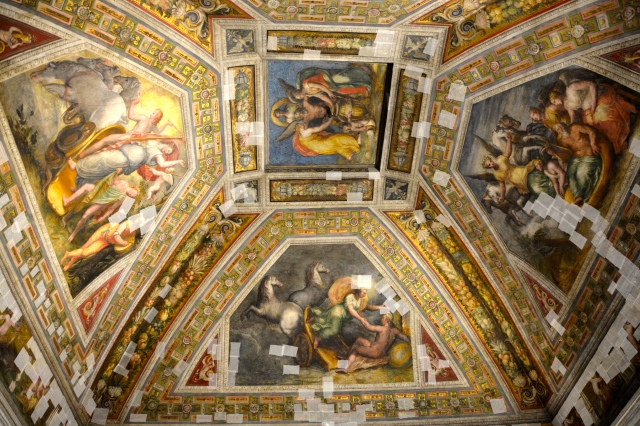 A taste of what’s to come…fabulous ceilings ©Jean Janssen

The short version of the travel saga is that we left Houston for a connection in Newark to Venice where we will pick up the car.  We ended up on that plane for over 9 hours for a flight that takes less than 4.  Air traffic control shut down Newark, so after circling we ended up getting diverted to Dulles for fuel and sat on the ground there until Newark opened again.  We landed in Newark two minutes after our plane to Venice took off.  Then we stood in line to get rerouted.  No more flights that night; no access to our luggage; and no compensation since it was a weather delay. 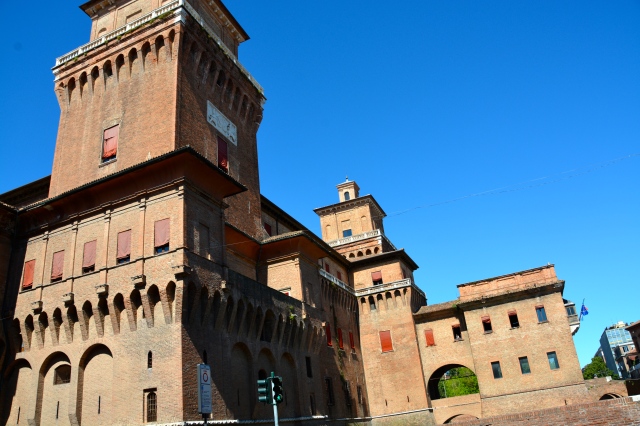 A taste of what’s to come-fabulous castles with drawbridges and moats. ©Jean Janssen

Boris got us a hotel room and when we finally headed out of the airport two hours after landing, there were still people from our flight in line to find out what was going to happen to them.  Most couldn’t get hotel rooms (or couldn’t afford one).  We were rerouted through Brussels, not leaving until almost 24 hours after our flight to Venice was scheduled to depart.  We had a set time to pick up the rental car and to meet the Villa owner and so Boris (speaking Italian helps) had to spend much of his time changing all those arrangements.

We got to Venice eventually (about 27 hours after we were supposed to get there), but our luggage did not.  We then stood in line at the baggage counter forever to file our claim.  They could not locate our bags in the system.  Again, Boris speaking Italian helped.  We even called the Villa owner so they could help us complete the form.  Finally we made it to the rental car counter and got underway.

The villa is about 1.5-2 hours from the Venice airport.  However, after we left the autostrada, there were 15 different directional notes to follow to find the villa.  At one point we were stopped by a train and Boris needed a “convenience break”; he headed off into the corn field-have I told you yet this is farming country.  I got into the drivers seat, crossed the tracks, and pulled over to let the two-way traffic pass.  Boris eventually joined me.  I have been doing the driving ever since.  Best way to learn your way around is to be the driver.  We made it to the Villa.

That was four days ago.  As of today, the location of our luggage is unknown.  It hasn’t been scanned since the day we left Newark.  We have learned that because of the weather shutdown, over 700 travelers were stranded and almost 1000 bags were missing.  We have made due with the toiletries the two of us had in our possession.  I didn’t want to wear make-up on vacation right? 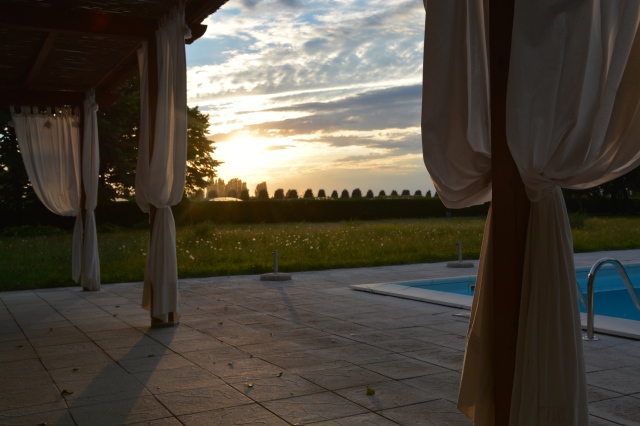 The sunsets viewed from our pool house are fabulous. Concamarise, Italy ©Jean Janssen

Clothing is another story.  Which brings me to our first full day in Italy.  Arrival day we just checked in, slept, and ate as soon as a restaurant opened for the evening-usually 8 pm here.  I took a evening swim too-had to wait until it was getting dark because I had nothing to wear while swimming.  So, there are up sides to having no luggage.

The next morning we headed out to find a open air market where they sell cheap (new) clothing items.  I mean really cheap and you can get anything there-including underwear.  For less than 100 euros (less than $112), I got a pair of shoes, two pair of pants, 4 shirts, 2 dresses, and three pair of panties-and I was picky.  Ok, so I look like an old Italian lady-it was that or a sleazy look-but hey I might need clothes for the whole week.  You could have done it for less too.  (The strangest part was buying the panties from the old Italian guy.  I wanted a bra too, but I just didn’t want to have that conversation with him, with or without the translation issues.) 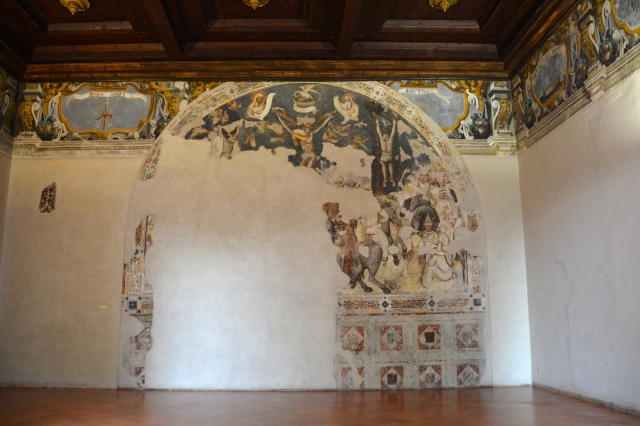 A taste of what’s to come-frescoed chapels ©Jean Janssen

After the market, we went into the grocery store.  Another interesting experience.  I remember when shopping in Italy meant going one place for bread, another for meat, a third for fruits and vegetables; you get the idea.  Now they have “supermarkets” like in the states, but the products are different.  Besides drinking water, most liquids come in paper cartons.  I see some of this at home, but not to this extent.  I got in trouble at check-out because I hadn’t weighed the bread.  I’m supposed to weigh the bread?  Fortunately, Boris figured out what the checker was telling me to do.  You also have to rent your grocery shopping cart or realize that the plastic ones (like our hand-helds) have wheels.  You must also bring your own bags or buy them.  I’m learning.

So this is the start of our adventure. Tomorrow I’ll put on my old lady clothes and head off to an Italian city I have never visited before.  Its still my favorite foreign country. 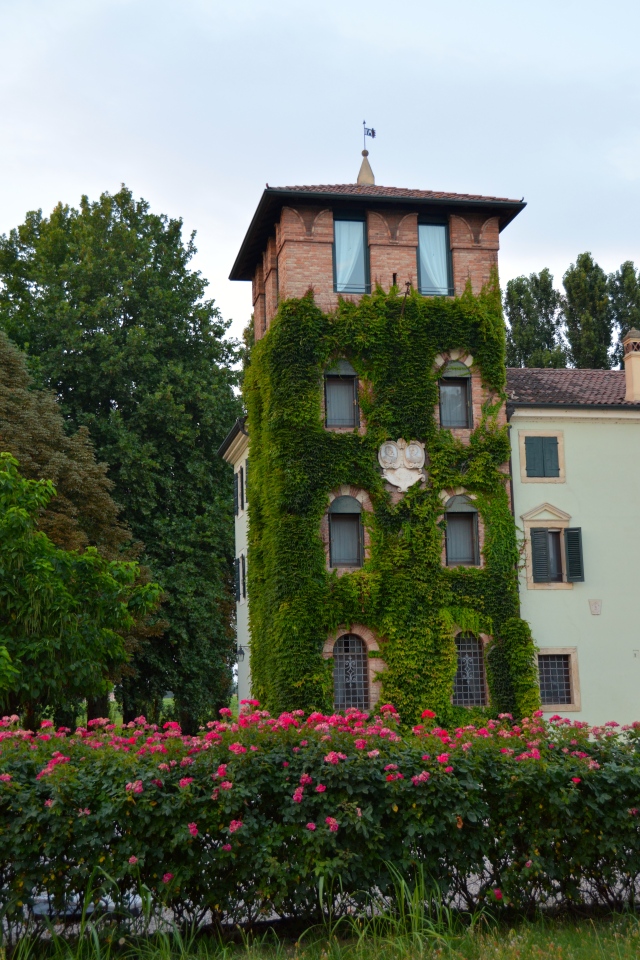 I am a retired attorney who loves to travel. Several years ago I began working on a Century Club membership achieved by traveling to 100 "foreign" countries. Today, at 49 years of age the count is at 82. Many were visited on land based trips. Some were cruise ports. Some were dive sites. Most have been fascinating.
View all posts by travelbynatasha →
This entry was posted in international, Uncategorized and tagged concamarise, Italy, Malaspina's Tower. Bookmark the permalink.