Posted on February 12, 2016 by travelbynatasha 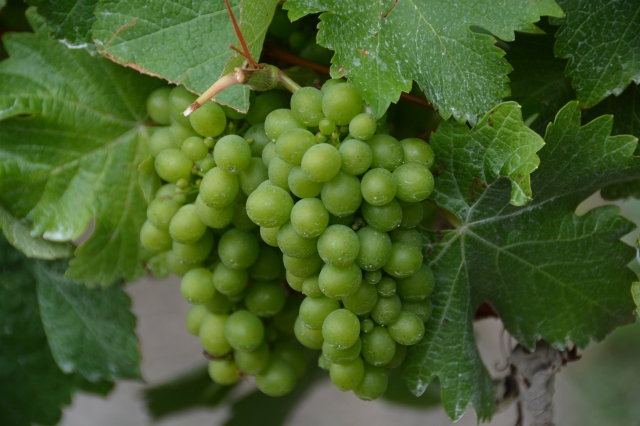 ©Jean Janssen    In the vineyards of Marlborough, the largest wine-producing region of New Zealand

©Jean Janssen    Making our way into the port at Picton, New Zealand

Today we are docked in Picton, New Zealand at the northern point of country’s southern island. Although there are also small islands that are part of the country, New Zealand is considered a country of three islands, the southern island, the northern island, and Stewart Island. Not surprisingly given its location, Picton is the point where the rail, truck, and car ferries leave for the Northern Island. We are docked right next to the ferry terminal after a nice ride in along the channel. Not all cruise ships have the opportunity to approach the city this way so we are fortunate. Another cruise ship was at anchor, but we are docked today. 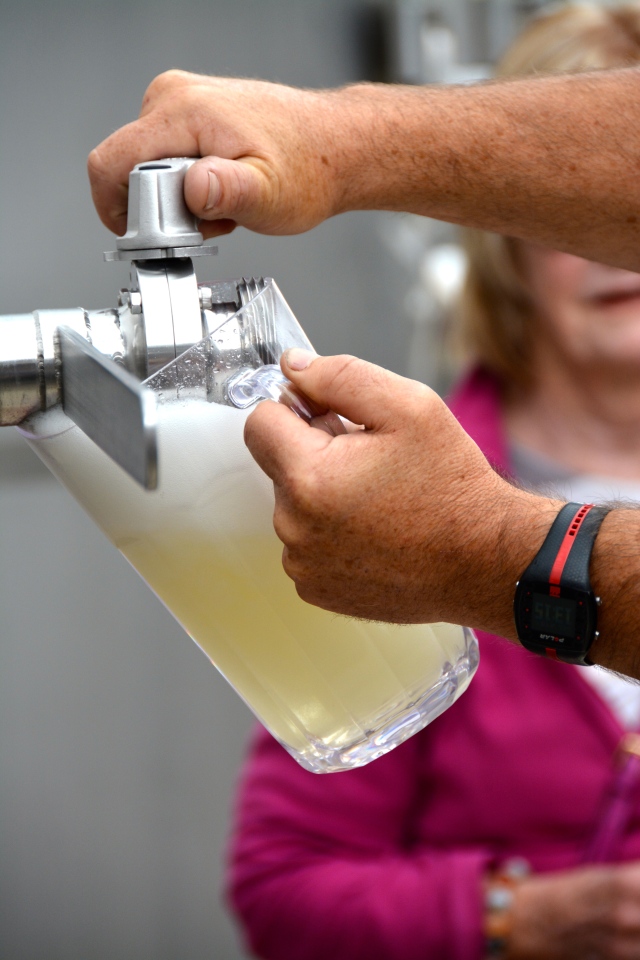 ©Jean Janssen   A pitcher of Sauvignon Blanc right out of the stainless steel drum to sample at Allan Scott Winery in Marlborough, New Zealand

By the time we got off the ship the sun had peaked out, the first time in over a week. The winery excursion is by far the most popular and there are four buses going to different regional wineries today. Our first stop was a small winery, Allan Scott, where we were welcomed with a tasting of their sparkling variety. The Winemaker gave us a wonderful introduction to their process, especially for the sparking wines that require far more care. It is only fitting that Natasha’s favorite is Champagne and other sparkling wines; Boris will tell you that I require far more care.

After describing the differences in making the Sauvignon Blanc (easier and quicker turn out time), the winemaker put a pitcher to the stainless steal drum and drew out the processing wine. We all got a tasting of that. Since he saw we were all ok with a cloudy wine, he took us around to another row and we tried a Chardonnay. Finally, out of the oak barrel, we got a sampling of the pinot noir. As we filed inside to sample the finished product, I saw I guide speaking to a gentleman not of our group who was watching the tour. I took a chance and was rewarded with an introduction to the owner/winemaker Allen Scott himself.

We chatted for a moment about wine, the difficulty of distributing in the United States, and travel to and from Houston, Texas (my home). Inside, I picked up a bottle of the sparkling that I particularly liked. I also sampled and purchased a bottle of another sparkling wine that was enhanced with a touch of cognac. (About now my book club friends are salivating with anticipation that I might share some of this with them.) 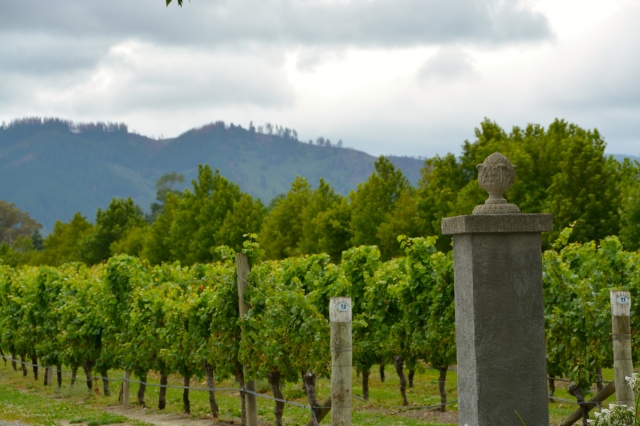 As we departed, Boris reminded me that we were now at our limit of duty free wine bottles. I reminded Boris that Azamara allows us to take the wine to our room so we could always drink some of the bottles before we got off the ship assuming we wanted to buy more at the next two stops. Boris liked that plan. 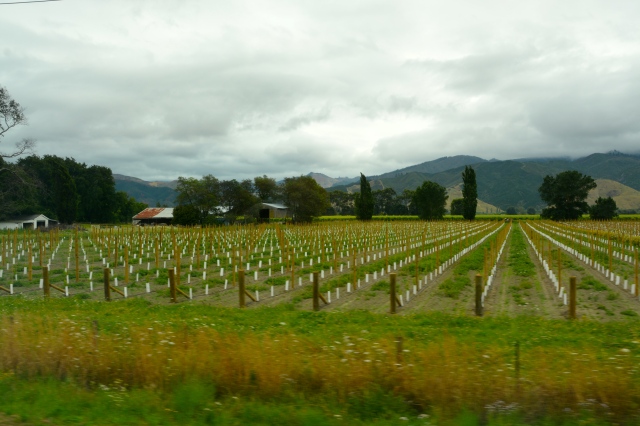 We passed vineyards on both sides of the road as we made our way to the next stop. Our guide (who was also the bus driver) did a great job of telling us about the industry. It is obvious that machinery trims the vines by the spacing of the rows and the cropped appearance of the wines. The greatest threats to the harvest are the weather-too much water or frost-disease, and the starlings that like to eat the ripe berries. They use air guns to scare off the birds, but after 25 years in use the birds have learned not to be too weary. As a result, they have reintroduced native falcons to the area. While revitalizing the species, the project also introduces a predator to the starlings. Over several vineyards, I saw falcons gliding and in one instance saw one swoop down and (presumably) capture a bird. The falcons are quite fast.

Our second stop was Drylands, a large producer who distributes under several brand names. They do distribute in the United States. Monkey Bay is apparently one of the well known varieties; later in the tour its namesake body of water was pointed out to us. At Drylands, we were taken to the edge of the vineyard and a representative told us about the wines and their care. Harvesting in this region begins in late March, so we are not too far off. They are not ready, but the vines were heavy with grapes. This region, with its free-draining soil, is best known for the production of Sauvignon Blanc.

©Jean Janssen The largest producing winery we visited in Marlborough was Drylands. Some of its wines, like Monkey Bay, are exported to the United States

Inside the lobby that was really not large enough for all of us, we sampled the same types (Sparkling, Sauvignon Blanc, Chardonnay, and Pinot Noir) as we had at Allan Scott. Boris and I were in agreement that we didn’t like anything we had sampled. Very few people bought wine, but for some that was because it was easily purchased at home.

The third stop was a small boutique winery with a long history. The owner has been named the world’s best female wine producer and is very hands on in the process. Hunter’s Winery had a nice setting with canopies of grape wines with space to park cars underneath. They were just for aesthetics and not used in the wine production.  There was also an artist in residence who did lovely work-but there was not a way to get anything like that back home.

This time we were in an even smaller lobby. After an introduction to the winery, they offered a tasting of Sauvignon Blanc, Pinot Gris, Riesling, and Chardonnay, and Pinot Noir. Once again, neither Boris nor I found anything we were particularly fond of. Everyone on the bus was hungry because no food was offered at any stop; the bigger seller was the winery’s bags of potato chips. They were just what I needed.

On the way back to the ship, we saw even more of the wood that is grown and harvested in New Zealand.  A pine variety was imported from California and it was found that it grew 2 to 3 times faster in New Zealand.  Faster growth can mean thiner wood so the product is divided into two grades.  Grade B, the thinner grade is exported whole to China where is made into cardboard and paper. Grade A wood is processed in New Zealand and used for home framing there and in Australia.

©Jean Janssen   I just thought this railroad sign I saw while riding through Marborough was petty cute.

We also saw cattle.  In southern New Zealand, most of the cattle is dairy.  On the northern island, there are both dairy and meat-producing cattle.  Wild deer are scarce here, unlike in North American where deer hunting seasons are used to control overpopulation.  Deer in New Zealand are raised on farms for the venison.  Boar hunting is done on New Zealand with hunters armed only with a large knife and assisted by a pack of dogs.  Boars can weigh up to 300 lb. and have 6-8 inch tusks.

Of course there are also sheep.  It wouldn’t be New Zealand without sheep.  They are sometimes used in the vineyards as “organic lawnmowers”  They are also an excellent source of manure.

©Jean Janssen We were docked right next to one of the large ferries in Picton, New Zealand.

When we returned to small town of Picton, population 5,000, you could get off in town or ride back to the ship.  There wasn’t much to see in town, but you could stretch your legs a bit and make the 5-minute walk through the ferry port to get to the ship.  Our balcony looked out over the docks and ramps for the ferries and I enjoyed watching them unload and then load again.  There wasn’t much time in between trips.

©Jean Janssen   Ferries in port at Picton, New Zealand on the north side of the country’s southern island. The closer, larger ferry transported vehicles which loaded and unloaded from a single ramp on the lower level. The more distant, smaller ferry unloaded vehicles from the top level via an elevated roadway. A rail line connects to the bottom level where a special engine moved rail cars on and off the ferry.

One of the ships offloaded walk-on passengers (some with bicycles), cars, motorcycles, 18 wheelers and other large trucks, and mobile homes/campers.  The other smaller ferry, had more of the same on the top that exited off an elevated roadway and rail cars on the bottom with their own track and engine to get them on and off.  The vehicles best represented on the ferries were the campers.  Free campgrounds are found all over New Zealand and campers were out enjoying the summer in full force.

Next stop is Napier, on the northern island of New Zealand.

UPDATE:  There were problems with our approach into Picton caused by the local pilot who hit the rocks.  The cruise company is required to have a local pilot on board when they are close to land and dock in these unique ports.  The error was not the fault of the ship’s crew, although they stepped in to correct the problem when it occurred.  On the night we left Picton it was thought there was no damage to the ship. The investigation of the ship took place while we were docked in Napier and was also conducted by divers outside Picton. The local pilot has been suspended.

I am a retired attorney who loves to travel. Several years ago I began working on a Century Club membership achieved by traveling to 100 "foreign" countries. Today, at 49 years of age the count is at 82. Many were visited on land based trips. Some were cruise ports. Some were dive sites. Most have been fascinating.
View all posts by travelbynatasha →
This entry was posted in Uncategorized. Bookmark the permalink.