Posted on February 11, 2016 by travelbynatasha

©Jean Janssen   Sea cave in Akaroa Bay. The bay sits in a volcanic crater, the evidence of which can be seen in the rock walls that surround the bay.

Southern New Zealand is an adventurer’s paradise with wonderful hiking, water sports, and amazing scenery. Today we are in Akaroa, a French-influenced seaside town that is a home base for hikers and animal lovers. There is just a small pier in Akaroa harbor, so we are tendering into shore. From this seaside gem, the ship is sending excursions to the New Zealand Alps via train and bus, including a visit to the location for shooting the scenes of Edoras, the fortress city of the Rohan people in Lord of Rings movies. You could also visit Christchurch or enjoy local touring.

Two of the tours included nine hours of travel and we wanted a chance to stretch our legs, especially after yesterday’s day on the train. We chose a harbor tour aboard the Blackcat. There was outside seating on top of the boat and enclosed seating down below. On the lower level you could also walk around the railed perimeter of the boat. Our boarding spot was just a few feet away from where our tender docked on the same pier.

We very soon spotted the small (blue, gray, & white) hector dolphin, often called the New Zealand dolphin. These dolphins do not stay in large pods but may come together to play and mate. About five of them swam near the boat, breaking the surface only to breathe. They do not commonly jump out of the water as other dolphins do. Fortunately the water was very clear and you could see them just below the surface.

Hector Dolphins are endangered. There is only 7,000-10,000 left in the world. They have the same endangered status as the Bengal tiger and pandas. Next we spotted two blue penguins at play on the surface; the blue penguin is an animal unique to this area of the world. They have white flappers. It is tough to see them during the day. They spend the day in the water and don’t like the sound of the boats. They come to shore at dusk. In Akaroa harbor you can arrange an excursion to see them come in. Like the miss at Phillips Island in Australia, we will not be in port at the opportune time.

©Jean Janssen   Salmon Farming in Akaroa Bay. The worker sitting on the edge of the boat is shooting food pellets into the circular netted keep for the fish.

They farm green lip mussels and salmon in the waters of Akaroa Bay. The mussel farm looked like someone had set up swim lanes in a cove of the bay. The salmon farming was done in round, netted areas.  A worker blew food pellets out of an air gun while we passed by at feeding time.

Along the shore the evidence that the bay was a volcano crater was evident. You could see the line of various minerals and rock as the sides rose up out of the water. We also saw wonderful sea caves. The water was clear and of a beautiful color.

©Jean Janssen   Baby fur seals play on the rocks and swim in the tide pools along Akaroa Bay, New Zealand

I thought it was all about the penguins for me, but I was most taken by a family of fur seals. While mother sunned on a rock, four of her babies frolicked in a tide pool the adventurous ones coming out to explore around the rocks before returning to swim once again. It didn’t matter that there was a strong wind and a light rain; I stood there enjoying their play. 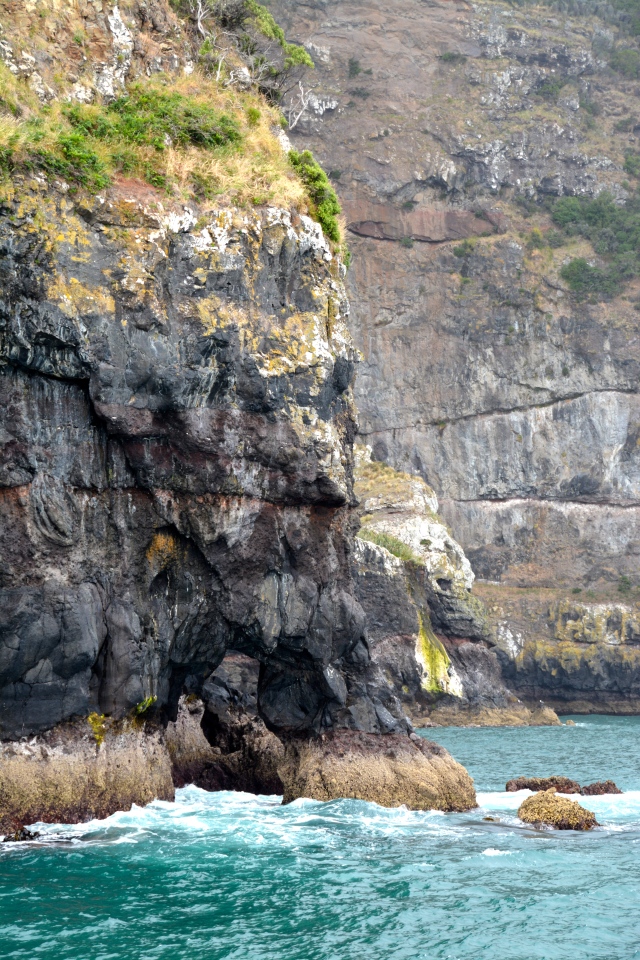 ©Jean Janssen   Volcanic rock formations line Akaroa Bay. This one resembles the profile of an elephant.

After watching the seals, we crossed to the over side of the bay spotting more caves and a wonderful rock formation that looked like an elephant. Each two-hour tour varies depending on what animals you see and how much time you spend watching them. I thought I was going to be disappointed about not taking one of the longer excursions, but I was not.

©Jean Janssen My fabulous lunch of green- lipped mussels enjoyed at one of the sidewalk tables for The Trading Rooms in Akaroa, New Zealand. The fresh mussels were farmed in the Akaroa Bay.

When the Blackcat reached the dock, we could have taken the tender back to the ship for lunch, but I suggested we eat in town and see if we could get some fresh mussels. Boris is not a fan of mussels, but he enjoyed his fish and chips. The green lip mussels, prepared in a white wine sauce, were fresh, huge, and delicious. Boris tried a New Zealand beer before joining me in sampling the New Zealand cider. We sat outside, the rain having passed.

After lunch we explored the city of Akaroa, which winds around the harbor. There were children enjoying the swimming platform out in bay during this, their summer holiday. They return to school in February.

Akaroa has a very French flavor. A large group of French settlers arrived only seven days after the English had taken possession of the area. Rather than return home, they remained here under English rule (although flying the French flag); their influence is still seen today. The city is charming with sidewalk cafes, hotels for backpackers, a historic church with a welcome sign out, shops, and local craftsmen in tented booths. All the beautiful summer flowers just added to the town’s charm. (There is only one ATM in Akaroa, so plan accordingly. This is where we got our first New Zealand dollars.)

©Jean Janssen   This gentleman was raising money for an animal hospital in Akaroa. He had both his pet dog and Mary, a lamb, on leashes as an incentive.

The dining room was quiet that evening with so many returning late from their long tours. We did ask about Christchurch because Boris had been interested in visiting there. In 2011, Christchurch experienced a horrific earthquake that caused massive destruction. Aftershocks continued for another two years, so reconstruction is slow to get going. In some cases, there is controversy on how to proceed. For example, many want the lovely Cathedral rebuilt at a cost of 10 million. Others say that it is more prudent to tear down and rebuild a more economical building at 4 million. The controversy continues and the Cathedral ruins sit propped up and waiting. We both were glad we had not chosen that tour.

Tomorrow we are going to do wine tasting in Marlborough, the largest wine-growing region in New Zealand.

©Jean Janssen  The lighthouse at Akaroa, New Zealand. You can tour this operating (although decommissioned) lighthouse.

I am a retired attorney who loves to travel. Several years ago I began working on a Century Club membership achieved by traveling to 100 "foreign" countries. Today, at 49 years of age the count is at 82. Many were visited on land based trips. Some were cruise ports. Some were dive sites. Most have been fascinating.
View all posts by travelbynatasha →
This entry was posted in cruises, international. Bookmark the permalink.