Posted on December 4, 2013 by travelbynatasha

We woke this morning to a glorious sight.  Opening the window, we saw the sun just rising and highlighting the Danube in amazing color.   It looked blue to me.  An hour before our anticipated arrival we went through the largest of the 11 locks we will traverse on this river cruise.  When finally inside, I opened the window and was able to touch the side of the lock that was less than a foot from our balcony railing.

Inside the lock on the Danube. This is the largest of the 11 locks we will pass through. With the wall less the a foot from my balcony, I reached out and touched it.
©Jean Janssen

After passing through the lock, we went to breakfast.  Have I already mentioned that champagne is available each morning for mimosas?  After all the wine last night, I passed but noted it’s availability for future mornings.  We will not reach Bratislava, Slovakia until this afternoon so I have a morning of writing and downloading pictures in front of me.  The Internet is free, but painfully slow.  There will also be a history lesson on the countries that touch the Danube and Boris and I will both attend that.  The lounge has lovely sight lines, but the more windows the colder the room.  At some point, I went down to my cabin and brought back the blanket off my bed.

After another buffet lunch, this time featuring prime rib, we docked at Bratislava and met our guide on the pier.  Today is an all-walking tour, but we are so close to the heart of the old city that we still won’t do enough exercise to compensate for the food we are eating.  Our berth has views of the interesting suspension bridge built in the 70s with what looks like a flying saucer on top.  (It is actually a restaurant.)  We passed what used to be security control, but since becoming part of the EU there is no passport control entering Slovakia. 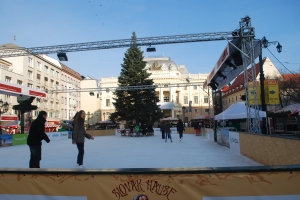 Ice skating rink in front on the Opera House in Bratislava, Slovakia. Note the large Christmas tree on the ice with wooden benches that the skaters rested on.
©Jean Janssen

We saw a lovely concert hall and went on to see the opera house at the end of a promenade that using to be a waterway.  Today there is a holiday market and stage in front of the opera house.  There is also a huge decorated Christmas tree in the middle of an ice skating rink.  Wooden benches surround the base of the tree.  We passed the American embassy with a fenced entrance and guardhouse.  It used to be open, but the fence has been in place since 9-11.  At the opposite end of the promenade there was an interesting statue of Hans Christian Anderson adorned with characters from his writing.  Just beyond the statute and the plague monument, you catch a glimpse of the castle up on the hillside.  The “UFO” Bridge to your left and the coronation church to your right.

The city served as the capital of the Austro-Hungarian Empire for many years and 16 of its kings were crowned here.  In the courtyard is a large menorah and monument to a synagogue that once stood where the freeway runs today.  Apparently, the Roman Catholic Church and the Synagogue coexisted happily next to each other for many years.

Ugly or scary figures were often found on the outside of house to protect against evil spirits. These are on the doors of one of the unrenovated buildings in the old city of Bratislava.
©Jean Janssen

We passed one of the oldest buildings in the city with a unrenovated façade.  It was the business entrance for a former druggist and had the name of the business in three languages-Slovakian, Hungarian, and German.  After WWII, all German words were removed from buildings when they were renovated.  The doors to the building had some pretty scary faces on it.  You see these markers all over the buildings; they were used to ward off evil spirits.

There were lots of residents out walking dogs.  We ran into one man with a large dog that looked like a St. Bernard.  It is actually a Russian breed used in their prisons to control the inmates.  The man was quite a character himself, an American married to a local plastic surgeon.  He is an oilman from Houston, Texas.  It figures.

A fellow Houstonian (not living in Slovakia) and his Russian breed dog. These dogs are often used in Russian prisons to control the inmates.
©Jean Janssen

The wonderful architecture continued with a structure that looked like a tower, but was actually one of the old city gates.  The clock tower on the square was marvelous, painted yellow, Maria Theresa’s favorite color.  Next to it was a church that was originally built by the Lutherans, but is now a Jesuit church.  The most beautiful building was the pink mayor’s home (also a museum).   Inside were beautiful tapestries that were hidden in the walls from the Germans during the war.  They had been forgotten and were not found until the building was renovated.

We visited the main Christmas market in the Square that had a much more Christmas feel than the one we visited in Budapest.  At first glance, it appeared to be mostly food, but on the outer rows we found some wonderful handicrafts and ornaments.  We did try one of the crepe-like local specialties recommended by our city guide.  You could get them with almost any filling.  I selected one with caramel, nuts, and cinnamon.  Fabulous!  Wish I hadn’t agree to split it with Boris. 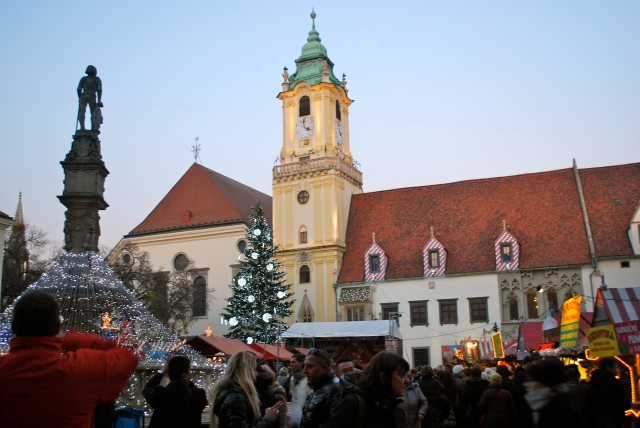 The clock tower is flanked by the large Christmas tree. Light strands radiate from the fountain.
The Christmas market in the old city of Bratislava, Slovakia.
©Jean Janssen 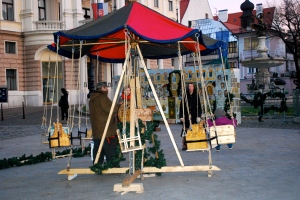 Child’s swing ride in the Opera House Market in Bratislava. The ride is operated by a hand crank.
©Jean Janssen

Loaded with packages, we walked back to the boat.  Passing the promenade with its ice skating rink and noting a wonderful children’s swing ride with a hand crank that sat just in front of the opera house.  We saw the most marvelous sunset as we went back to the ship, the “UFO” bridge silhouetted against it. 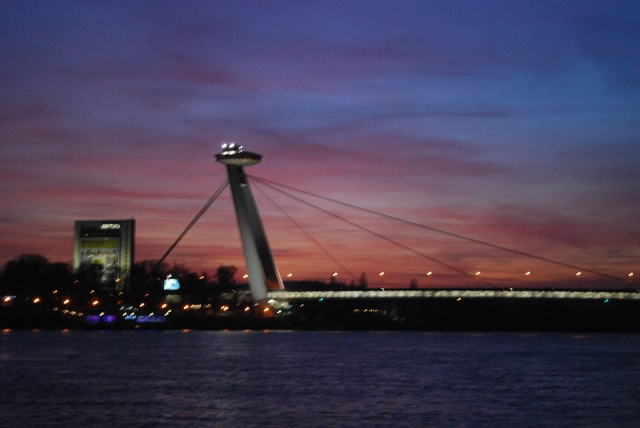 The Suspension bridge in Bratislava, Slovakia at sunset as seen from our cabin aboard the River Beatrice, Uniworld.
©Jean Janssen 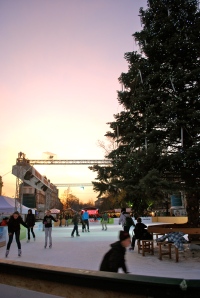 With not much of a break, we changed for dinner and then saw an early program with character actors dressed as Franz Joseph and Sissi who gave us a historical perspective in anticipation of our visit to Vienna tomorrow.  Another nice dinner followed-leg of lamp.  I skipped the wine this evening.  At night, there was a musical program that featured the conductor (who played the piano and accordion) and 1st violinist (who also played several pipes and was a marvelous tenor) from the Bratislava Symphony.  They performed songs from opera and musicals, as well as local folk music, sometimes utilizing very unique instruments.  Ave Maria on a pan flute was really marvelous.

We enjoyed Bratislava and would like to return.  Even though Boris didn’t get a new hat, I would not consider it an off day.  On to Austria…

I am a retired attorney who loves to travel. Several years ago I began working on a Century Club membership achieved by traveling to 100 "foreign" countries. Today, at 49 years of age the count is at 82. Many were visited on land based trips. Some were cruise ports. Some were dive sites. Most have been fascinating.
View all posts by travelbynatasha →
This entry was posted in cruises, international, River Cruise and tagged Bratislava, Slovakia. Bookmark the permalink.