We docked early at Penang, Malaysia.  Penang is an island in the Strait of Malacca with a good supply of fresh drinking water that made it a great transit point for traders.  Even today, the fresh, soft water is plentiful.  A local family’s monthly water bill is less than $1.  In this hot, humid place, luckily showers are cheap.

We had breakfast on our terrace before our city tour of Georgetown.  We began at the Penang State Museum with a nice balance of history and culture in its exhibits.  While the European inhabitants have left, the Chinese, Malay, and Indian families that remain in this area all influence the culture.  On the street of harmony, we passed a Buddhist Temple, Hindu Shrine, and a mosque all in the span of two blocks.  There are some lovely colonial buildings, but many are crumbling.  The museum itself is in what remains of a school built in 1896, the other half destroyed by a bomb during the Japanese occupation.

Upstairs in the museum, you will find exhibits depicting the establishment of a British colony in 1786 when the island had few inhabitants.  Captain Francis Light of the East India Company named the city for King George III.  Fort Cornwallis was erected.  (Americans will remember the namesake Cornwallis as the surrendering General at Yorktown.)  While the countryside remained Malaysian, Georgetown attracted British, Chinese, and Indian traders, influences still seen today. 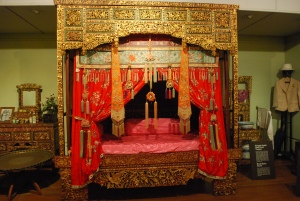 The exhibits on the ground floor of the museum depict how these various cultural groups have shaped the area.  There are particularly well-done displays regarding the wedding traditions of these cultures.  In the Chinese culture, at age 12 girls were no longer allowed to go to school.  They were kept out of sight at home and taught how to manage a household, particularly the finances.  The home had small peepholes where girls would look outside to see what was happening without being seen.  These young girls usually married at 15 or 16.  Next door to the museum is St. George’s Church, the oldest Anglican Church in Southeast Asia.

If I hadn’t had an air-conditioned bus to take me around, I would have tried this Penang version of a trishaw with two wheels in the front and a third wheel on the bicycle on the back and decorated with flowers.
©Jean Janssen

Our bus next took us to the Pinang Peranakan Mansion.  All along the streets were blue or white flags and we saw “demonstration” groups in similar colors in various areas near the civic buildings.  We had docked on Nomination Day when candidates registered for the election to be held on May 5.  The flags represented the various political parties.

The Mansion depicts a typical home of a rich Chinese family and their opulent lifestyle.  In addition to recreating the customs and traditions of a Baba (father/husband) and Nyonya (mother/wife), the building itself is a mix of eclectic design with Chinese wood cravings and inlays, Scottish iron-works, and English tiles.  It was built at the end of the 19th Century.

Our guide pointed out the portrait of the original owner with his traditional Chinese dress and long necklace of pearls and jade.  Although he was not born a nobleman, he sent so much money back to China that the Emperor elevated his station.  This tin trader had done very well for himself since the longer the necklace, the higher the rank.  When resented to the Emperor, you had to bow until your necklace touched the floor.  So a longer necklace (higher rank) meant you did not have to stoop or “kowtow” so far.  (Kowtow being one of those words I have understood since childhood from context without knowing the origin of the word.) 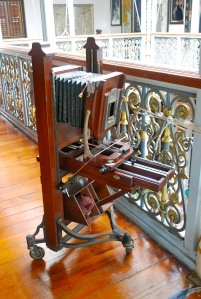 I loved the center courtyard, the glass panels in the upper windows, the ornate carvings, and the over-the-top furnishings.  I snapped many pictures.  Not surprisingly, my favorite piece was an old fashioned standing camera which I have never seen up close.

We next visited the Leong San Tong Khoo Kongsi.  This is a cultural center for the Chinese Khoo Clan.  When members of the clan came to Penang from China, the presented themselves at the Kongsi where the registered and were given help in finding a home and work.  Subsequent births into the clan were registered here.  There are several kongsi, representing various clans, in Georgetown.  The center section is similar to a temple. 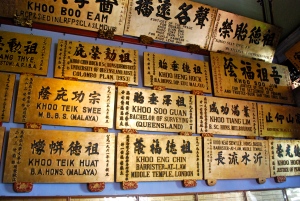 In a side room, registered members of clan demonstrated their educational backgrounds on golden plaques.  Many of the Penang Chinese families sent their sons to be educated in England and later the United States and Australia.  However when these professional men returned to Penang, they always married a local Chinese girl or one that was brought over from China.  In the wedding portraits in the museum, the young men were often shown in western dress, but the young brides were always shown in traditional Chinese dress.   There was only one exception where the bride was dressed in western fashion.  Her bridal gown was described as “progressive”.

Registration book for Khoo clan members luckily not destroyed in the war. A computer backup is now kept.
©Jean Janssen

The lower section of the kongsi is a museum.  Here I leaned the significance of the order of the Chinese names.  First comes the surname, second the name for the generation of the family the child is in, and finally their “first” name.  I need to go test this out with some Chinese friends at home (all of whom use their western names professionally).

There was also a kitchen display.  Chinese who came to Penang learned of curry from their Indian neighbors.  Our guide told us that they could only use the clay pot when cooking with the curry as the spices would react to the other cooking containers used.  The spoon was also clay or made of shells.  She also pointed out a vendor on the street, an Indian, who had added noodles to his offerings with curry to satisfy his customers of Chinese descent.

Courtyard of the Khoo Kongsi, Penang.
Site of a scene from Anna and the King staring Jodie Foster and Chow Yong Fat.
©Jean Janssen

Anyone who has seen the American movie Anna and the King staring Jodie Foster and Chow Young Fat may recognize the courtyard at the Khoo kongsi.  The facades on some of the buildings were removed to reflect the original look and the courtyard “flooded”.  The space was used to depict the entrance harbor in Bangkok where Anna arrived in the movie.  The facades were then replaced and each family was paid $700.  Our guide told us those most excited about the movie were the grandmothers who were cast as extras.  In her words, they gladly handed over a small portion of her earnings to their grandchildren and told them to go have lunch at McDonald’s because she wasn’t cooking today; she was acting in a movie instead. 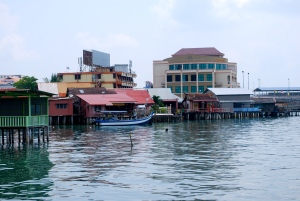 One of the Chinese Clan Jetties, Penang, Malaysia
©Jean Janssen

The final stop on our city tour was the jetty where homes were built out over the water.  Poor immigrants needed housing but they were unable to afford land taxes, so they build their homes over the water.  I saw a similar set up in Malaysia when I was in a different part of the country 10 years ago.  Then, there were cisterns on their roofs to collect fresh water, but no plumbing.  These were the homes of the very poor.

Along the jetty in Penang. Note the plumbing lines and the political flags out for Nomination Day.
©Jean Janssen

Today, the Penang version is quite different and people clearly live here by choice-although most are older people aided by younger generations.  I saw air conditioners, satellite dishes, and flat screen TVs in the homes.  All of the homes have plumbing.  They also have a thriving souvenir and food service business with all the tourists that come by.

This jetty home had a side patio. Inside you could see the large flat screen TV.
©Jean Janssen

Most of the homes are narrow and quite long.  Additions on the back were made to house multiple generations of family members.  Residents also remain clever in avoiding taxes.  The tax is based on the width of the dwelling, not the length.

Georgetown, Penang was named a World heritage Site by UNESCO in 2008 noting its “living testimony to the multi-cultural heritage and traditions of Asia, and European colonial influences.”  I thoroughly enjoyed my visit, but boy was it hot.  You can’t avoid the heat here.  They are one degree off the equator and it is hot and humid year round.

Homes in Penang along the Street of Harmony.
©Jean Janssen

After an excellent tour, we headed back to the ship to eat, sleep, and generally be lazy, just because we can.   Sea days next and then Sri Lanka…

Natasha on the jetty in Penang, Malaysia

I am a retired attorney who loves to travel. Several years ago I began working on a Century Club membership achieved by traveling to 100 "foreign" countries. Today, at 49 years of age the count is at 82. Many were visited on land based trips. Some were cruise ports. Some were dive sites. Most have been fascinating.
View all posts by travelbynatasha →
This entry was posted in cruises, international and tagged jetty, kongsi, kowtow, Leong San tong Khoo Kongsi, Malaysia, Penang, Penang State Museum, Pinang Peranakan Mansion, Trishaw. Bookmark the permalink.