The Marina Bay Hotel in Singapore. Love the ship on top which holds the bar and swimming pool.
©Jean Janssen

After more than 30 hours of travel, all but 7 of it in the air, we arrived in Singapore. After long lines at passport control (a large group of Chinese tourists had arrived just before us) and about 15 minutes of fear when Boris’ bag arrived and mine did not, we were out to catch a cab with all our luggage accounted for. I have been to Singapore many times, but only to the airport-one of the best in the world. The drive to the pier was interesting as we saw much of the architecture that Singapore is justly famous for. The Marina Bay Hotel, three skyscrapers with what looks like a long ship on top, and the Garden by the Sea with its tall metal “trees” stand out. 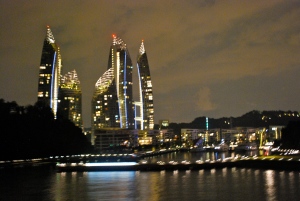 The Singapore skyline by night as seen from the balcony of our fantail stateroom.
©Jean Janssen

There are three cruise ports in Singapore. In spite of handing our driver specific directions, he first took us to the new (and wrong) terminal. With no ships at dock, it was a pretty easy determination that we needed to look elsewhere. I would have like to have been docked there and seen the fabulous Singapore skyline at night. The lucky traveler will probably have this experience when they arrive as they continue to transfer departures there.

We checked in and were fortunate to be able to give our bags to porters. This service ended at 5 pm and we arrived after 4:30. No lines meant we were fairly quickly on the ship. Just as we arrived they called for the mandatory lifeboat drill so we went straight to it, hand luggage and all. We have a nice room with a very small, dated, bathroom. The draw is the balcony; it is quite large and will be perfect for sunset dinners. We are in a “fantail” room facing the sea on the back of the ship. I have always wanted to try one of these rooms.

The sunset was indeed lovely. After a shower, fresh clothes, and dinner, we went to bed before 9 pm.

The cable car when right over our ship and passed through a building mid-route.
©Jean Janssen

Singapore is hot. I woke early, before light. In spite of the early hour, it was steamy when I stepped out on the balcony. Boris loves his breakfast so we were in the dining room early and I got the Eggs Benedict I reserve for days when I have a full-service breakfast (not often). We did a little more unpacking, explored the ship, and got a few pictures of the surrounding buildings. There is an amusement island with a Hard Rock Hotel and Universal Studios just across from our ship. The cable car ride literally passes over our ship when goes through the top of a building on shore before continuing on. Boris, of course, went to trivia.

After an early lunch on the outdoor terrace of the Windows Café, we went into town for our Singapore excursion. We got another look at the downtown skyscrapers and I noted that a large cruise ship was docked at the new terminal. We made a stop at the Asian Civilizations Museum housed in the Empress Palace. This is the civil district with the colonial buildings.

The restored colonial buildings along the waterfront stand in contrast to the skyscrapers.
©Jean Janssen

Next was ride on the bumboat along the Singapore River. These vessels used to transport cargo between ships and the riverside. Also visible were the restored century-old shops that now house bars and restaurants along the shore. Behind them is a skyline of skyscrapers. The waterway was wide in parts and visible from the highway in others. While it reminded me of the Rio Ride along the Riverwalk in San Antonio, Texas, it lacked the Texas version’s intimacy and charm. (Boris thinks it is ridiculous that I am comparing the two, but it was the first thing I thought of when I boarded the bumboat.)

The modern day rickshaw in Singapore is now a trishaw-a bicycle with a single wheel cart attached for passengers. We went from the Bugi district to Raffles Hotel on a trishaw.
©Jean Janssen

After our bumboat ride, we went down to the Bugi District where the cheap market finds are found. No time for shopping today, we were boarding trishaws for our ride to the Raffles Hotel, the “Grand Lady of Singapore” where the Singapore Sling was invented. No rickshaws (two-wheeled cart where passengers are pulled by manpower) in sight, we rode a trishaw which was a single-wheeled cart attached to a bicycle.

Going to Raffles was the highlight of the day for Boris (aka “Mr. History”). He even brought “props” along. We went straight to the Long Bar where he posed for a photograph with his monocle. The bar, with it peanut shell-covered floor, has moved locations within the hotel. It was originally off the main lobby, but was moved after WWII to it present location off the courtyard. Boris suspects it sustained major damage by the Japanese who used the Raffles Hotel as their headquarters during the war. 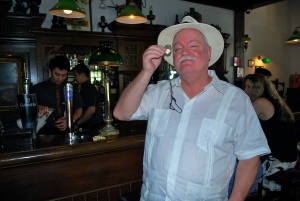 After Boris hit the gift shop, we went to the Tiffin Room in the main lobby for tea. There was a buffet with dim sum, a three-tiered tray with sandwiches and pastries, and scones to accompany your endless refills of tea. The lobby with its fabulous staircase and fresh orchids was lovely. There was no access to many of the areas for those not staying in the hotel. We ended the visit with a photo of the doorman dressed in the fashion of the old Indian army.

Near the Bugi District, we saw three young Buddhist priests walking along the street.
©Jean Janssen

On the way back to the ship, our guide Florence shared some interesting facts on Singapore. About 70% of the population is of Chinese ancestry and most of the population is Buddhist. There are no free schools in Singapore, although the poorest of the population can apply for government assistance to send their children to school. Most goods are heavily taxed in Singapore, so most of the people cross the border into Malaysia each weekend to make their regular purchases. All males have to provide two years of military service with continued retraining through age 40. Soldiers are sent to other countries for training in a variety of conditions. Finally, she told us that the government was currently encouraging families to have more children. 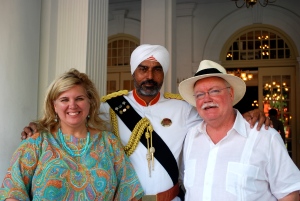 Boris and I with the Indian doorman at the Raffles Hotel in Singapore.

Our departure from Singapore was scheduled for 6 pm that evening, but we were delayed by continuing repairs to the thrusters that had required the employment of professional divers. (Thoughts of last year’s fire that had cancelled our India cruise on the Azamara Quest came to mind.) They were also trying to track down 16 passengers that had not turned in their passports. We got underway about 8:30 pm and I left my dinner to come back to the cabin and watch the sail-a-way from our fantail balcony. The buildings were beautifully lit and the lit cable car carriages dotted the sky like fireflies. It was a magical send-off. 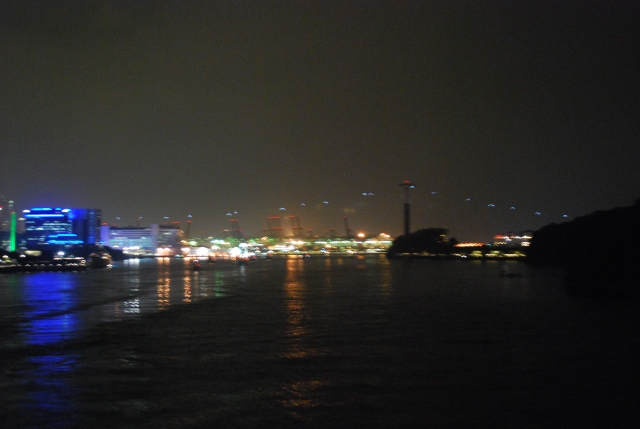 Our departure from Singapore. The lit cable cars dot the skyline like fireflies.
©Jean Janssen

I am a retired attorney who loves to travel. Several years ago I began working on a Century Club membership achieved by traveling to 100 "foreign" countries. Today, at 49 years of age the count is at 82. Many were visited on land based trips. Some were cruise ports. Some were dive sites. Most have been fascinating.
View all posts by travelbynatasha →
This entry was posted in cruises, international and tagged Marina Bay Hotel, Raffles Hotel, Singapore, Trishaw. Bookmark the permalink.