Posted on December 30, 2012 by travelbynatasha

Disclaimer.  The next two posts describe what is probably one of the tamest trips you could take to Las Vegas. 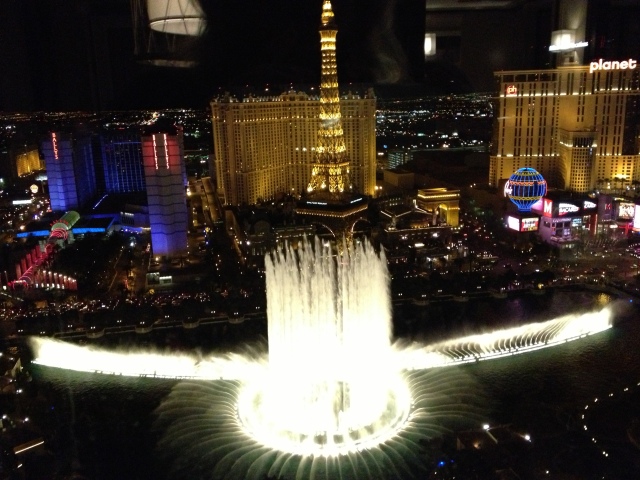 About 3 weeks before the end of the year I realized I was going to be just under 800 miles short of gold status on United. Usually I piggyback off of Boris, but since his injury sidelined him this year I am trying to get to gold on my own.  Gold versus Silver means access to the Gold Star Alliance lounges in international airports.  On a long layover, these lounges are a blessing. 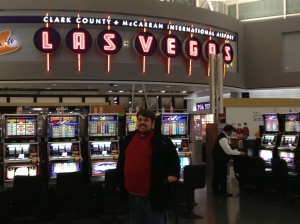 Arrival in Vegas. Yes, there are slot machines at the airport.
©Jean Janssen

Where to go in late December?  First thought was New York to see the amazing holiday decorations.  It is also a terribly expensive time to go.  Last year when Rocky turned 21 we had planned on taking him to Vegas, but the trip had to be cancelled.  What about celebrating 22 in Vegas?  After all, we were in Disney for the actual 22 and as my sister Emma likes to say, Las Vegas is an adult’s Disneyland.

I am not a big LV fan as I don’t gamble (at least in a casino, maybe a little bingo).  There is so much more to do in Vegas though-big shows, touring the themed hotels, great restaurants, terrific shopping-that I thought we should give it a try.  The Las Vegas Strip is so iconic that the experience should be on every 21 (or 22) year old’s bucket list.  Hopefully traveling with his mom, Rocky can’t get in too much trouble.  (Maybe he can keep me out of trouble too.)

3Jack3 is coming in a few days, so his will be just a quick between-holidays trip.  Rocky and I took a late night flight out of Houston arriving at 10:45 pm (12:45 am in Houston).  Sometimes you get a great view of the Strip when flying in, but not tonight.  We took a cab to our hotel.  The airport is practically on the Strip, but because of traffic you have to wind around and take the back way in.  Cost $30 with the tip.  Our flight was full, but in spite of the set up for a long queue, we got a cab right away. 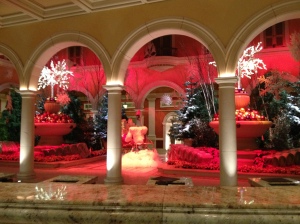 You can often get an amazing hotel deal in Vegas-they will get your money another way.    I did my research on hotels.com and found there were basically two tiers-the double digit bargains and the triple digit options that can move up to 4 or 5 digits if you want a really special hotel or speciality room.  Since we are only spending 2 nights, I decided to splurge on triple digits at a hotel that Rocky has often spoke of due to its movie associations like Dodgeball and Ocean’s 11.  We are staying at the Bellagio. 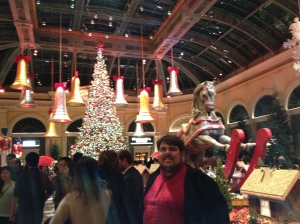 The Bellagio Conservatory decorated for the holidays.
©Jean Janssen

Cab dropped up off at the side entrance, so we wound through the casino-which is massive-to the front lobby.  I’m not used to the heavy smell of cigarette smoke in public places, but that is part of the “character” of Vegas.  We saw the famous Bellagio fountains through restaurant windows as we made our way through.  The lobby, adjoining conservatory, and shopping corridors were the only parts of the hotel decorated for the holidays and they were full of tourists taking pictures.  I stood in line to register while Rocky stared out the front doors at the fountains.  I told him to take a look and I completed the registration.

After a general search site like hotels.com, I follow up directly with my hotel of choice to see if I can get the same or better deal.  The Bellagio site offered the same price and it is easier to cancel when book directly with the hotel, so that is how I made the reservations for our stay.  I don’t know if it was that, the fact that we were celebrating Rocky’s  22, or our very late arrival, but we were given a COMPLIMENTARY upgrade to a Penthouse Suite. 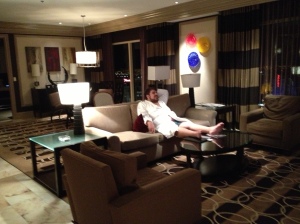 I didn’t tell Rocky and he was stunned when we walked into the room.  Frankly so was I.  You walked in and immediately to your right is the guest bathroom (one of three) which, as Rocky put it, was big enough to put a bed in.  On the left was the walk in bar with stools and a foot rail on the outside.  This looked into a huge room with a den area, desk area, and a dining area.  The bedroom was off that and two additional bathrooms were off the bedroom.  Each bathroom had its own toilet (woman’s side also had a bidet), a two door mirrored closet, and sink vanity.  The woman’s side also featured a makeup table and huge Jacuzzi tub.  The man’s side had a bachelor’s chest and a steam shower.  There were more toilets than people in our room.

I saved the best for last.  The main room and bedroom also looked out on the Strip and the Famous Bellagio Fountains. The Eiffel Tower (or at least the LV version) is directly across the street.  What a view.  Suddenly we weren’t tired.  We watched the fountain show from our windows-every 15 minutes from 8 pm to midnight, every 30 minutes from 3 pm to 8 pm and noon to 8 pm on weekends and holidays.  From our windows on the 32nd floor, we were amazed at how many of the strip hotels we were able to pick out.  Needless to say, we didn’t go out again. 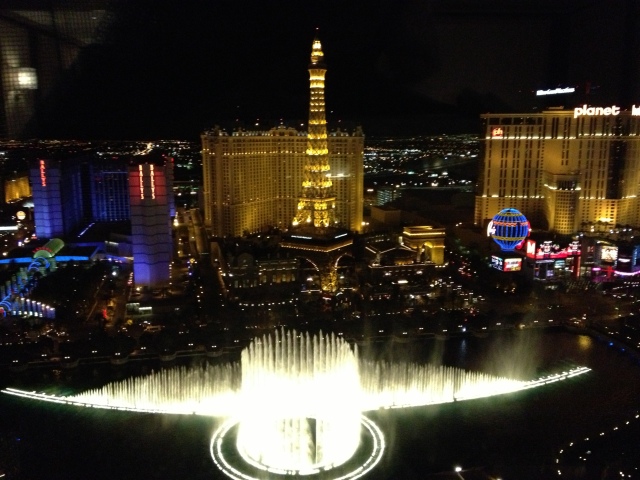 The Bellagio Fountains as seen from our Penthouse Suite. What a view!!
©Jean Janssen

Rocky was afraid to go to sleep in fear that he would wake up and realize he didn’t really have this amazing room. Finally packed it in at 12:45 (2:45 am to my body) dreaming of my next day of Penthouse living.

I am a retired attorney who loves to travel. Several years ago I began working on a Century Club membership achieved by traveling to 100 "foreign" countries. Today, at 49 years of age the count is at 82. Many were visited on land based trips. Some were cruise ports. Some were dive sites. Most have been fascinating.
View all posts by travelbynatasha →
This entry was posted in domestic travel and tagged Bellagio, Las Vegas. Bookmark the permalink.