a few final words on Tuscany with a wheelchair

Posted on November 5, 2012 by travelbynatasha 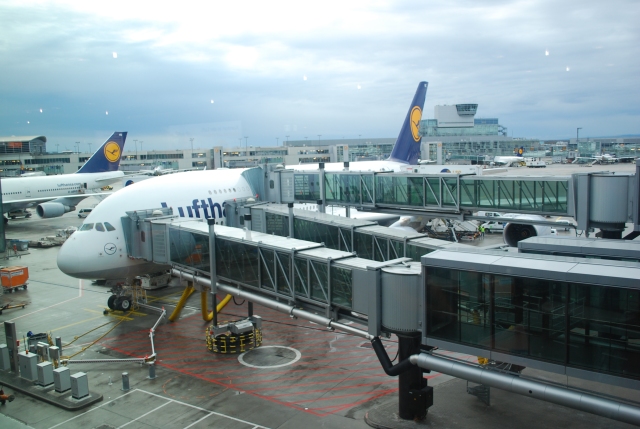 Our new Lufthansa air bus, the A380, loads from three ramps in Frankfurt.
©Jean Janssen

We woke up very early on Sunday morning (4 am) to make our flights home.  We were fortunate that the bellmen were not too busy so one of them took us to the terminal with our luggage in the hotel van.  When we arrived, I ran in and found our check in line.  Then I went back out and rolled Boris into the line.  Then I went out and directed the bellman in and was able to deposit our luggage right next to the check in line.  A nice tip was in order for this gentleman. 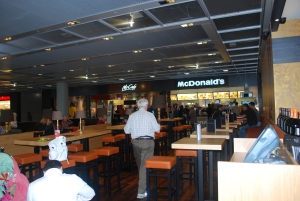 A McDonald’s in the less than a month old Z terminal in Frankfurt. Definitely not part of the Slow Foods Movement started in Italy in response to the opening of a McDonald’s at the Spanish steps in Rome.
©Jean Janssen

The counter was crazy and I don’t know how they were going to get all the passengers checked in before the flight, especially with agents leaving to go to the gate.  If you haven’t been to foreign airport before you may be unaware that their counters are specific as to airline and flight only for a short time frame and they are not always in the same place.  You really have to watch the monitors to know the proper line.  The woman in front of us was going to Zürich and didn’t realize her problem until she got to the counter and then had to go stand in another line (even though both were Lufthansa flights). 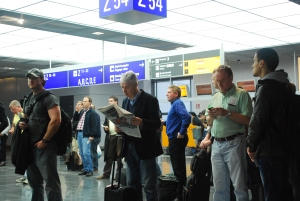 crowds in the new Z terminal in Frankfurt waiting to board.
©Jean Janssen

After the check-in, we had  to wait a while for wheelchair assistance.  After he came, we had to go to another area to check-in his portable wheelchair which will go as baggage all the way to Houston.  They could not get the conveyor belt to run the right way, so we were there for a while.  We arrived at the gate to go directly on the aircraft.

This was a short, smooth flight to Frankfurt with Boris and I in aisle seats across from each other.  We were in row 7 and could easily see business class in rows 1-5.  They were in the same size seats (3 and 3) and were served the same cart breakfast as we were.  Only difference was they were offered periodicals (mostly in German).  Don’t know what the price difference was but certainly not worth it. 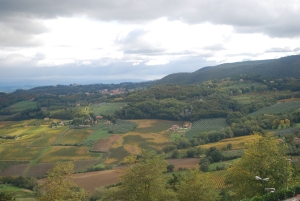 It was hard to leave the beautiful Tuscan countryside.
©Jean Janssen

We arrived into the A terminal in Frankfurt and went to the new Pier A, sign-posted terminal Z with a Lufthansa assistant.  She was very friendly, but like our previous assistant, this was the first time she was taking someone to the new terminal.  She said there had been lots of complaints because it was opened before the staff had really been trained on everything.  She also told us that it was only 7 gates, but that they could load up to three flights at one gate at a time.  Of course that meant more apron flights.  When I commented that I couldn’t believe they did that much outside boarding in a city with such cold weather she just said there wasn’t space and that she thought another terminal for Lufthansa was already planned. 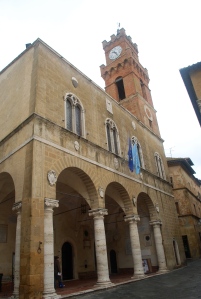 We were on first again, Boris was one of ten wheelchair passengers.  He was in my old seat in 51 C on the aisle.  I was in 50 K, a window seat.  As it turns out, the first row on the bottom level has more leg room so I was pleasantly surprised.  I sat next to a young Egyptian couple.  He works in the oil business which was the reason for their travel to Houston.  He has been before, but this was her first visit.  Their hotel was in the Galleria area and she was planning on going shopping; her stated reason for coming on the trip.  When I asked about sightseeing he commented on how you had to have a car to get around Houston (very true), so that probably they wouldn’t see much.

I watched 5 movies to kill the time during this ten and a half hour flight.  They had added a few more movies for November.  A front row seat has its advantages; Boris got the first wheelchair and we were off to use our global entry stamps at immigration and by-pass the line (a bargain at $100 for five years for people who do several international trips a year).  We got down to baggage claim far before the luggage did.  We were met there by a Lufthansa representative who told us that one of our bags had not made the flight.  I was betting on the wheelchair (and was right).  The plane was so large, baggage came down on two belts, one for connecting passengers and one for those terminating travel in Houston. 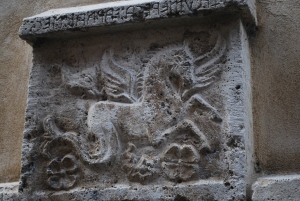 Fortunately, Lufthansa had started the bag claim for us and it didn’t take long to complete the paperwork and get in on our way.  The chair will be delivered to our home the next night.  Rocky was waiting for us outside and the wheelchair assistant helped us all the way to the car.  Home to the Houston heat.

I would highly recommend the complimentary wheelchair assistance that is offered by the airlines for anyone that is physically challenged.  While this is a free service, tipping is permitted, deserved, and appreciated. 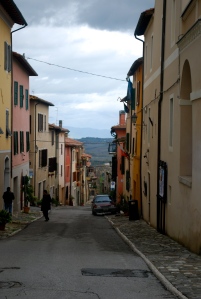 Just thought I would share a few observations for those of you contemplating travel to this area of Italy.  The food is amazing.  Blow the diet and eat the pizza, pasta, and bread.  The beef and veal were also fabulous.  The pizza is so much better in Italy, thin crust and not overloaded with red sauce.  But it is intended as an individual portion, so order your own (one per adult person) and cut it with a knife and fork.  Salads, traditionally, are served after the main meat or fish course.  And don’t forget the wine, which doesn’t have to be expensive to be good.

Italians don’t do fast food.  In fact, they have a whole movement called slow food which celebrates traditional products and the time it takes to prepare a wonderful meal.  The meal is an event and meant to be savored.  Give yourself the time to enjoy it.  They also won’t rush you out, so you will probably have to ask for your check.  It is not “the how many times we can turn over the table in one night” approach we are used to in American restaurants.  You may be the only diners at that table for the evening. 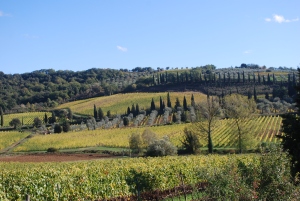 You will need a car to make your way around Tuscany.  Unless you are well-versed in manual transmissions, request an automatic and reserve it early.  You will also want the most powerful, yet smallest (particularly narrow) vehicle that will still fit your group and luggage.  You will be limited on where you can go and park if you rent something big.  You will need to refresh yourself on how to parallel park before you go.  Gas is sold by the liter, is more expensive, and is not readily available in all areas. 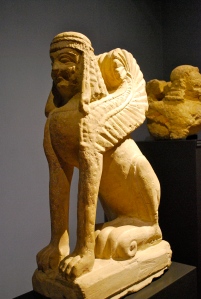 At the Etruscan Museum in Chuisi, Tuscano, Italy
©Jean Janssen

You don’t have to speak Italian in this part of Italy, in fact many of the menus have English translations.  If it says they have a tourist menu, avoid that.  Learn the few words listed in the guidebook; it will be helpful.  If you want a toilet, ask for a toilet or WC (water closet); don’t ask for the restroom or bathroom which mean very different things.

The summer will be hot and busy.  The Europeans travel in August, so avoid that month due to crowds.  Late May or early June are the best time if you need to travel in the summer.  I suggest the fall or spring.  Some of the roads in Tuscany can be pretty treacherous in the snow and icy winter.  October is perfect, but avoid the crowds we ran into by not including the November 1 holiday (All Saints Day) in your travel plans. 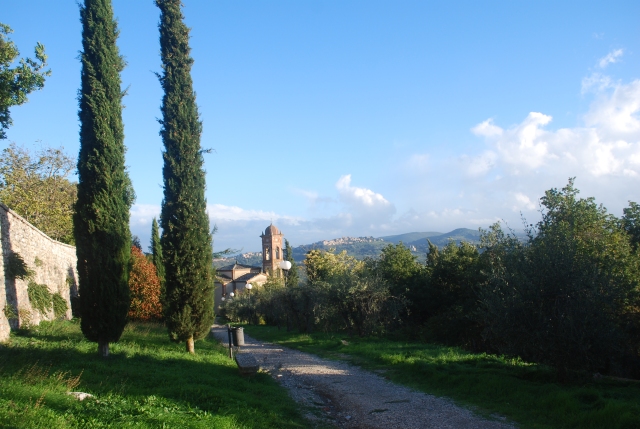 I can go on and on, but if you have a specific question, just send it to me as a comment.  Enjoy Italy.  After traveling to 80+ countries, it is still my favorite.

I am a retired attorney who loves to travel. Several years ago I began working on a Century Club membership achieved by traveling to 100 "foreign" countries. Today, at 49 years of age the count is at 82. Many were visited on land based trips. Some were cruise ports. Some were dive sites. Most have been fascinating.
View all posts by travelbynatasha →
This entry was posted in international and tagged global entry, Lufthansa, Lufthansa A380, slow food, Z Terminal. Bookmark the permalink.