Leaving the Philippines and the travel home

Posted on August 9, 2012 by travelbynatasha 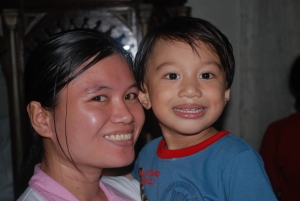 The beauty of the Philippines is captured in its people.
©Jean Janssen

In an effort to give my wet dive gear the maximum time for drying out, I didn’t pack until the morning of our departure.  A fresh supply of baskets and sarongs (along with a few other items including the blow dart guns for Boris and Rocky) meant that the bags were pretty full.

I said goodbye to Vernie at the dive shop and then Marco took our group to the airport.  Atlantis handled getting us all checked in.  I am excited to see my family, but the departure was bittersweet and I shed a few tears.

We flew from Dumaguete to Manila on a regional carrier, Cebu Pacific, which serves the Philippines and select destinations in southeast Asia, namely Singapore and Hong Kong.  On this airline, they play games during the flight for prizes.  So you can win a prize, but otherwise nothing is free.  You even pay for your drink. 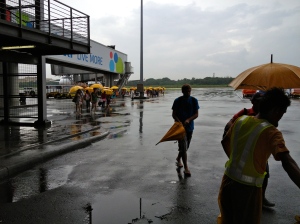 A sea of umbrella as we leave the airplane in Manila with rain and no jetway.
©Jean Janssen

There was no jetway when we landed in Manila.  It was raining so as you left the door of the aircraft you were handed an umbrella.  Then you fumbled down the stairs with your rolling bag in one hand and an umbrella in the other.  Luckily, my purse was a small backpack-styled one.  Unfortunately, we had to collect our luggage at the domestic terminal and re-check it with Singapore Airlines in the international terminal.  The terminals were quite far apart and we had to be transported by van from one to the other.  (Atlantis handled the transfer.)

A Filipino tricycle on a sunny day..
©Jean Janssen

The tricycles around the airport all had plastic coverings added to protect the driver and passenger from the rain.  The plastic was so worn that I don’t know how anyone could see through it.  I bet there are more accidents on rainy days due to the lack of visibility through the plastic than from the rain or wet streets.  Not sure if I ever described the tricycles.  They are basically a motorcycle with a covered sidecar.  I have seen as many as 7 people in one, but others say they saw up to 12.  They are used as a taxi when traveling short distances and each has a registration number on the back.

I saw these signs at passport control in Manila both coming and going. I have no idea what “Wang-Wang” is and frankly was afraid to ask.
©Jean Janssen

I really took advantage of my lounge privileges on the layovers between flights, enjoying Star Alliance Gold Lounges in Manila, Singapore, and Moscow.  Singapore Airlines is very clever, offering a separate lounge for their own frequent fliers and another less posh one for the other alliance airline customers.  In some cities, gold alliance customers and business class are in one lounge and first class in another.  Either way, I enjoyed the unique food and drinks and the free internet service.  I was able to email Boris and Rocky in each break city along the way.

My global entry status got me through passport control and customs quickly in Houston. You don’t have to fill out the entry form or stand in the passport control line.  You insert your passport into special machines at immigration (there is a special stamp in your passport and the passport bar code has your program info) and are given a receipt which you use at the last stop at customs control.  There is a separate line at customs too which means no waiting.  I have seen it save up to 2 hours.  Donna recommended the program to me.  You apply for the global entry program on-line and a criminal background check is done.  Once you pass the background check, you are called in for an interview where you are fingerprinted and told to be a good girl/boy in terms of what you bring into the country.  Interviews are at the customs office in major cities, usually at the airport.  The fee is $100 for a five-year “pass”.  It is well worth it for frequent international travelers.  Boris, Rocky, and I all have it now.

This is the last photo on my underwater camera taken in the Philippines.

After 43 hours of travel door to door, I am home from the Philippines.  It is a lovely country with even lovelier people.  Hope you enjoyed the entries and photos.  Nap time and dealing with jet lag from a 13-hour time difference for me.

Donna and I on our last night in Dumaguete.

I am a retired attorney who loves to travel. Several years ago I began working on a Century Club membership achieved by traveling to 100 "foreign" countries. Today, at 49 years of age the count is at 82. Many were visited on land based trips. Some were cruise ports. Some were dive sites. Most have been fascinating.
View all posts by travelbynatasha →
This entry was posted in international and tagged Cebu Pacific Airlines, Star Alliance Lounges. Bookmark the permalink.