Posted on August 2, 2012 by travelbynatasha 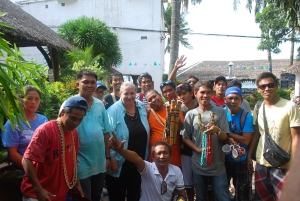 Dive Mom with some of the hopeful vendors that hung out around the entrance to our hotel.
©Jean Janssen

This morning is for packing.  We met by the office for a final group photo before walking along the beach to the large banca that will take us back to Bantangas for our ride to Manila.  There were more vendors out this morning hoping for the last deal.  Donna bought a few things, all at better prices than the rest of us had gotten all week. 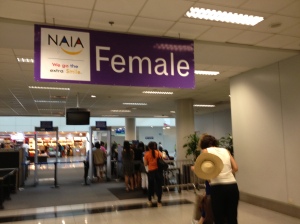 Airport Security Checkpoint in the Manila airport for our domestic flight to Dumaguete, Philippines.
©Jean Janssen

We made one comfort stop along the way, and Jim loaned me pesos (the local currency) so I could buy a McDonald’s meal.  Then it was straight to the Manila airport where the van went though a security checkpoint to get into the airport grounds.  Next we had a security check just to get inside the building.  At the check-in counter, we put all our bags together to minimize the overweight charges.  Your limits are very low on these domestic carriers.  Next was another security checkpoint much like we are used to at home.  The major difference was that there were separate lines for men and women.  I have seen the entrance screening before, but never have seen separate lines at the main security checkpoint. 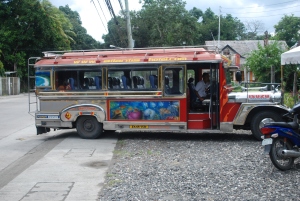 one of the two Atlantis specially modified jeepney
©Jean Janssen

It was a short flight, just over one hour, to Dumaguete.  We are fortunate that we are able to fly directly to the city where our dive resort is located.  It is a 30-45 drive from the airport to the resort depending on traffic.  We are once again met by several of our dive masters and escorted to the resort on the two Atlantis jeepneys.  These have been further modified to have single seating one one side and double on the other.  You face forward.  This is in contrast to the standard jeepney with bench seating facing each other. 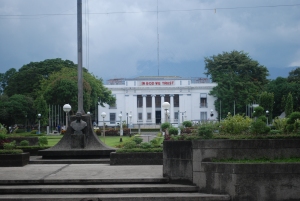 We drove right through the center of town and pass the “white house” (government building), the Cathedral, and the major shopping area.  Most interesting are the mess of wires hanging from the electrical poles.  There is not a single traffic light or stop sign in the city.  I only saw one intersection where someone was directing traffic.

Dumaguete is a university town of about 80,000 people.  There are 7 universities here specializing in nursing, engineering, and education.  Many of the Filipino nurses working at the Texas Medical Center in Houston were trained in Dumaguete. 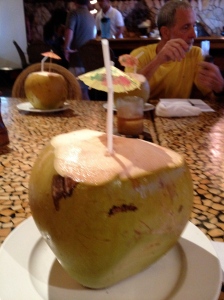 Our resort is right on the water and we leave the main road and pass by a couple of houses to reach the Atlantis Resort Dumaguete.  On Trip Advisor, it is rated the #1 resort for Dumaguete.  We were welcomed with a coconut drink. 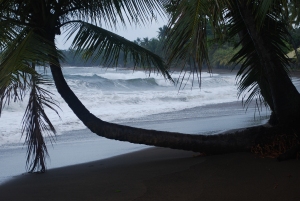 I am a retired attorney who loves to travel. Several years ago I began working on a Century Club membership achieved by traveling to 100 "foreign" countries. Today, at 49 years of age the count is at 82. Many were visited on land based trips. Some were cruise ports. Some were dive sites. Most have been fascinating.
View all posts by travelbynatasha →
This entry was posted in international, Scuba diving and tagged Atlantis Philippines, Atlantis Philippines Dumaguete, Dumaguete, jeepney, Manila Airport. Bookmark the permalink.