Our Final Dive Day in Puerto Galera and a School visit

Posted on August 1, 2012 by travelbynatasha

The dive princesses at the giant clam garden

This is our last day to dive in Puerto Galera.  Cris has been a good guide for the Princesses.  Our boat captain, Larry had the day off so Jake was our driver.  He was pretty quiet, not sure what to make of us.  He warmed up a little by the end and I knew we had him when he referred to me as Princess.  The plan had been to dive the channels, but it was too rough so we went to the nearby Hole in the Wall dive site.  I love passthroughs and we got to do this one coming and going.  It was very narrow.  Fortunately, I had had the body scrub so I could make it through.

Donna thought this nudibranch was “sleek and sexy”. Obviously, she is a sucker for a gentleman in a tuxedo, even if he is a slug.
©Jean Janssen

There was current at the beginning and end of the dive, but calm as we visited the coral reef and saw a red racing flatworm, a school of yellowtail snapper, white-eyed eels, multiple nudibranchs, trigger fish, staghorn coral, and a sea turtle.

For the second dive, we went to the Giant Clam dive site.  This is the one Cris and I had visited alone.  You find lots of seahorse in the sandy flats here and the information we learned in our class the previous evening came in handy. Cris and I had seen the wonderpus, but today we spotted a mimic octopus, very rare.  Even Dive Mom said she had never seen one.  We played with it for quite a while, chasing it and watching it land, spread out, and change to a darker color, definitely angry with us for bothering it. 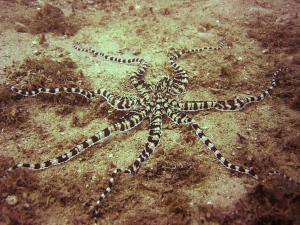 We also saw a ribbon eel sticking his head out of the sand.  I usually see eels in the rock or coral reef, very unusual to find them in the sand.  After seahorse hunting-successfully-and chasing the octopus, we headed to the garden of giant clams, Cheryl really wanted a picture of the three of us there, so Cris obliged her.

After this dive Donna was done for the day; she wanted to get a head start on cleaning her equipment and having it dry out.  Cheryl and I went out after lunch for the third dive, returning to the Sabang wrecks.  The sea had grown rough and we didn’t want to go far, so Cris suggested this.  In spite of it being a return visit, we spotted some new things-a banded pipefish (who looks like he has a target on one end), a dancing juvenile sweetlips, giant purple octopus, a mushroom coral pipefish (which looked like a little white snake in the annemone), and a banded coral shrimp with babies.

We rode in a Jeepney out to visit one of the village schools.

One of the reason I really like traveling with Dive Mom is that see makes our travel more than diving and wants us to experience the culture and interact with the people.  She has a project to help fund schools in the places that we visit.  Divers on her trips bring school supplies and used computers to donate.  Dive Mom purchases local products which are sold at auction at the dive shop.  The auction proceeds are donated to the schools.  I have visited schools in Borneo, Fiji, and now the Philippines with Dive Mom; obviously, her personal reach extends even further.

One of the elementary school teachers at her blackboard. The words are written in Tagalog, the Philippine language. Each area also has its own dialect.
©Jean Janssen

Since we can not dive later today (due to our flight out tomorrow and the time restictions on altitude after diving), we took the late afternoon to visit a local school.  One of our divers, Emily, is a watercolor artist and she taught a class to the teachers a couple of days ago.  Today, we are just dropping off supplies but are also invited into the classrooms.  The students were extremely polite and welcoming and it was a real treat.  Dive Mom is very good with the students and I took the opportunity to interact with them as well.  Experiences like these enrich my travel.

Several of the older students who live at Sabang beach rode back with us in the jeepney. They enjoyed seeing Jim’s underwater photos.
©Jean Janssen

On our way back to town, we gave a ride to several of the older students who live at Sabong Beach.  Dive Mom had arranged for the local vendors to come at 6 pm to the front entrance of the resort so we could do any last minute shopping.  I avoided the area until 7 pm.  When I came down, Dive Mom was making the final purchases from a special vendor who brought her homemade sarongs.  As much as I tried to avoid the 6 pm frenzy, I did pick up a few of sarongs, always a good purchase for me.

These 1st and 3rd graders are never late for school. They live next door. I visited with their mom on our way out of the school yard.
©Jean Janssen

The resort featured a Monogolian Wok each evening with your choice of about 20 vegetables, 12 meat and fish options, and at least 15 sauces.  After making your selections, they prepare it for you with rice, noddles , or both.  Since I always found something I wanted on the regular menu.  I hadn’t tried the wok yet, so this was my last chance.  After dinner, I headed to my last spa treatment, a 2-hour hot stone massage.  Its a rough life!

These banded pipefish (lower left hand corner of photo) looked like they have a target painted on one end. They are very rare.
©Jean Janssen

The mantis srhimp looks like a lobster tail with a head. Obviously his friend wants his picture taken. I could have cropped him out, but since he was eager I decided to give him his moment in the spotlight.
©Jean Janssen

I am a retired attorney who loves to travel. Several years ago I began working on a Century Club membership achieved by traveling to 100 "foreign" countries. Today, at 49 years of age the count is at 82. Many were visited on land based trips. Some were cruise ports. Some were dive sites. Most have been fascinating.
View all posts by travelbynatasha →
This entry was posted in international, Scuba diving and tagged banded pipefish, giant clam, jeepney, mimic octopus, nudibranch, Sabang Beach. Bookmark the permalink.