Dive Mom with one of our new friends. This was taken on my first big trip with Oceanic Ventures in July 2004 when I had only been certified a few months. We were off the coast of Borneo near Mabul Island, not far from the Philippines.
©Jean Janssen

Today I head out to the Philippines for a dive trip with my travel group  Oceanic Ventures.  I love traveling with Dive Mom. (Ann teaches diving to students of all ages which is how she acquired this title.  Even though we are the same age, I still let her “baby” me.)   I have a great travel agent that helps me with my cruise bookings, Beth Wehunt with Vacations To Go.  Dive Mom is my source for most of my diving adventures.  When I travel with her, she arranges all the air, transfers, accommodations, and diving.  Depending on the trip, sometimes meals and excursions are also included.  In addition to fabulous diving,  her goal is for us to experience the culture.  One of the ways she does this is for our group to bring along school supplies and used computers and to visit a local school to drop off the donations and meet the teachers and students.  Years later even if the dives start to run together (I can always consult my log), I always remember the cultural experiences on these trips and the opportunity to get to know the people.

Flag of the Philippines

I have never been to the Philippines, although I have been all around it, mostly on other dive trips.  I decided that I needed to educate myself a little.  I will sprinkle through my posts some of what I learned through my research, hopefully putting the comments in my upcoming blog posts in context. 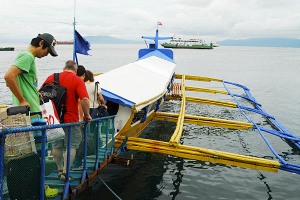 First you should remember that this Asian nation in the South Pacific is simply not that close.  Still got a globe in your house?  Turn it half way around and that will probably put you in approximately the right place.  To get there, we are flying from Houston to Moscow, Russia-Moscow to Singapore-Singapore to Manila.  From Manila we take a van to the coast and board a ferry at the Batangas Pier which will take us to Puerto Galera, our first destination in the Philippines.  If it sounds like it takes a long time to get there, you are right.  I leave on a Saturday and arrive on Monday. 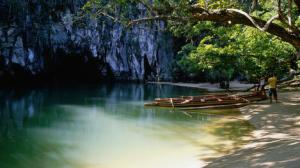 Map of the region which includes the Golden Triangle of the Philippines, Indonesia, and Malaysia with one of the highest diversities of marine species in the world.

The Republic of the Philippines is a collection of 7, 107 islands in the South China Sea with Vietnam to the west, Borneo to the southwest, and Indonesia to the south.  Of the islands, only 2000 are inhabited and only 1000 are larger than 1 square km (.4 square mile).  2500 islands are not even named.   This is area prone to earthquakes and typhoons known alternatively as the Typhoon Belt and the Pacific Ring of Fire.  In 2000, a Brussels-based research center declared the Philippines the most disaster-prone country on earth.

The Philippines was a colony of Spain for 300 years and the Spanish influence can still be found in the names of cities, surnames,  the architecture, and religion.  80% of the population is Roman Catholic, Asia’s largest Catholic community.  The Philippines has been independent since the end of World War II. 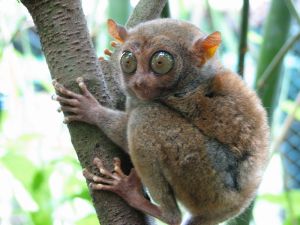 This is the Philippine Tarsier, a small primate.
I hope to see one of my trip, but it might be rough as he is only 5 inches long.

The rain forests and extensive coastlines make it one of the ten most “biologically mega-diverse countries” in the world.  It offers some of world’s best scuba diving with unique critters.  (Like 180 different species of nudibranchs.)

It is the world’s 12th most populated country with an additional 11 million citizens that live outside the country, 3.1 million of those in the United States.  I think the rest are all working on cruise ships.  When I first started cruising years ago, much of the staff came from Eastern European nations.  Today, most cruise ships are staffed by Filipinos.  On our trip in April, over 85% of the staff was from the Philippines.

Off to do my packing…

Perhaps travel cannot prevent bigotry, but by demonstrating that all peoples cry, laugh, eat, worry, and die, it can introduce the idea that if we try and understand each other, we may even become friends.  –Maya Angelou

I am a retired attorney who loves to travel. Several years ago I began working on a Century Club membership achieved by traveling to 100 "foreign" countries. Today, at 49 years of age the count is at 82. Many were visited on land based trips. Some were cruise ports. Some were dive sites. Most have been fascinating.
View all posts by travelbynatasha →
This entry was posted in international, Scuba diving and tagged Oceanic Ventures, Philippines, Republic of the Philippines. Bookmark the permalink.

1 Response to Anticipating the Philippines