The Journey not the arrival matters.  –T. S. Eliot

Rocky dropped me off at the airport with my dive gear, clothes, and school supplies (to donate) all packed.  We are catching a flight on Singapore Airlines to Singapore via Moscow.  There is a one hour stop in Moscow where we go through passport control and have the “opportunity” to spend some money in Russia while the plane in cleaned and refueled.  From there we have another long flight to Singapore.  Dive Mom, ever cheerful, refers to Singapore as being “two naps away”.

I stayed in these huts when I was at Sipadan. They are now air-conditioned, but were not when I stayed there.
A very nice upgrade.

On my first long trip with Oceanic Ventures, I went to Mabul Island off the coast of Borneo where we stayed in a water village.  The entire dive resort was in huts that sat over the water and were connected by series of piers to each other and the land.  Our travel time to Mabul was 56 hours.  Because I simply can not sleep on airplanes, I slept a total of 4 hours in that time frame.  One of the other divers with our group was a physician who gave me a sleeping pill that lasted two hours.  At one point in the trip we had a four-hour layover so we went to a hotel, ate, took showers, and slept for 2 hours.  After that trip, nothing has ever been as long and 37 hour travel time to Puerto Galara didn’t seem so bad.

My g-seat, shown open, has saved my tailbone on many a long flight. These are commonly used by airline pilots.
©Jean Janssen

Our luggage was checked all the way to Manila, so your carry on had to include anything you were worried about losing and any electronics that you were worried about checking.  I had my laptop (so I could post to the blog), my good camera for land shots, my underwater camera with its housing and strobe, my tolietries, a change of clothes, a swimsuit, my mask, and my dive computers.  There were also the items needed inflight-my ipad for reading and electronic sudoku, my g-seat which saves my tailbone on long flights, my neck pillow, my socks, and my little friends-Ambien-that sometimes (fingers crossed) give me up to 8 hours of sleep. 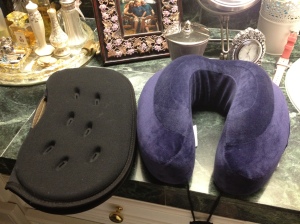 My g-seat, now shown closed with the carry handle to the left, is light-weight and don’t take up too much room in a tote or backpack. I also love my two layer neck pillow-note the raised center-which is sold with a travel bag you can tie to your carry on. I highly recommend these two items for long trips.
©Jean Janssen

Singapore Airlines is the best I have ever traveled on.  Their economy seats are like Business class on some airlines.  The built-in TV in the headrest was about 10 inches wide.  There were footrests and they still hand out toiletries and socks to economy guests.  You can have your wine or beer complimentary, as well as a wide variety of snack choices and two meals-all in economy class.  They have lovely and helpful flight attendants that serve you graciously in the most beautiful uniforms.  (I never had a waist that small.)  Rocky discovered the beauty of the SA inflight staff on our trip to Indonesia.

Singapore Airlines flight attendant in uniform. She looks good even in the middle of the night on our flight from Moscow to Singapore.
©Jean Janssen

Dive Mom likes us at the airport 3 hours early-nothing like making a long journey even longer.  I got my trip t-shirt and checked in.  The weight allowance on Singapore Airlines is lower, 44 lbs rather than 50, so you have to be extra careful with the packing.  Significantly, they check the weight of your carry-on bag which is limited to 15 pounds.  That is a little tough given all the electronic gear I am carrying aboard.  They do have exemptions-one small camera, a laptop, a purse.  My purse was loaded down with anything small that weighted a lot.  Dive Mom presented her fully loaded backpack as her “purse”.

I got lounge privileges so I hung out there until boarding.  Ambien was my friend on the first flight.  I didn’t think it was working until I woke up 6 hours later when they were making noise with the breakfast service.  My stomach didn’t handle it well and the I found myself looking for an air sickness bag.  Finding none, I used the towel which fortunately was replaced for the next flight. 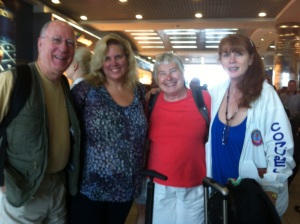 With Jess, Donna, and Cheryl in the Moscow airport.

Twelve hours after we took off, my dive buddy Donna met us at the airport in Moscow.  She was traveling in Siberia with her grandson and now will continue her travel with us while her grandson visits another grandmother in Russia.  She is the most amazing and interesting person.  When she wanted to learn Spanish, she bought the Harry Potter collection in Spanish (which she had already read in English) and taught herself the language.  Her husband doesn’t like to travel but that has never slower her down.  She has visited about 50 countries and has some of the most fabulous photographs to prove it.  She could retire, but by continuing to work she has travel money.  Plus they love her so much that they are flexible with her travel.

The second leg was another 12 hours, although the pilot got us in early.  I would have traded that hour for a smoother landing.  He landed on wheels on only one side of the plane, then shifted to the other side, before realizing that you could use all of them at the same time.  Good thing it was still dark outside so we didn’t have to see anything.  The airport at Singapore is amazing, but we are very early (before 6 am) so much is still closed.  Donna and I got into the airport lounge which has internet so I think I will send this post. I am typing on my computer which she is enjoying the g-seat.

I am a retired attorney who loves to travel. Several years ago I began working on a Century Club membership achieved by traveling to 100 "foreign" countries. Today, at 49 years of age the count is at 82. Many were visited on land based trips. Some were cruise ports. Some were dive sites. Most have been fascinating.
View all posts by travelbynatasha →
This entry was posted in international, Scuba diving and tagged Mabul Island, Singapore Airlines, Sipadan. Bookmark the permalink.