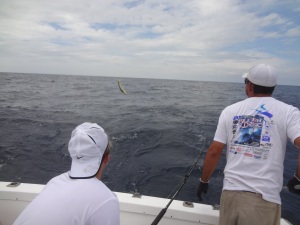 The boys headed out on a fishing trip today.  They were all up very early as they had to be at the marina at 7:00.  There were steady rains in the morning and the start of their trip was delayed.  3Jack2, Rocky, and 3Jack3 determined their order in the chair before they left the dock.  The fishing trip itself was a graduation gift from Boris to 3Jack3; they had talked about going together for years. 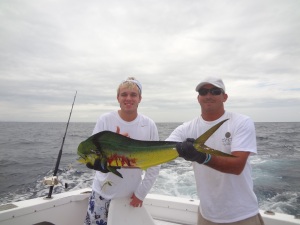 My nephew did me a favor and took the camera along so my brother was able to snap some pictures for me.  The marina was at El Cid, one of the nicest areas of the city near the Gold Coast.  We have seen lots of pelicans all week, but they were plentiful around the dock hoping for the castoffs.  Very few fish were caught today due to the weather, but 3Jack3 was lucky to have gotten one of only four fish caught today.  The crew told them they usually bring in multiple Dorado and a sailfish in each boat most days.  Mazatlan is known for its game fishing. 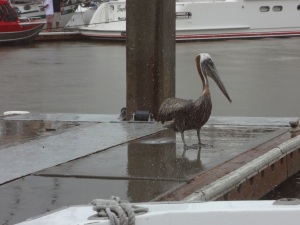 Pelican on the fishing dock waiting for the castoffs.
©James John Janssen III 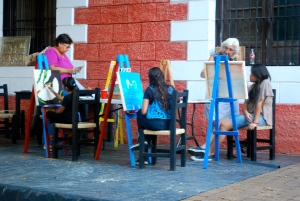 The rest of us just lounged around and the boys just us at the pool directly after the they got back.   After everyone had a chance to cool down, we headed to the Artist District in Colonial Mazatlan to look around.  Most of the artists’ shops were closed, but we did see some children taking painting classes.

They are currently in the process of making this area a pedestrian mall.  We had to do some detouring around the street construction.  We passed the Mercado (market) and parked near the Cathedral.  It was cleaning day, but we were able to go in and take a look around.  The Malecon did not have many people on it today, but the area around the Cathedral and market were bustling with people, buses and carts. 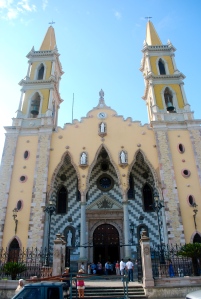 Mom and 3Jack2 at the Mazatlan Cathedral
@Jean Janssen

After the Cathedral, we visited the plaza across the street with its large bandstand.  All of us remarked on the square trimming of the trees.  This is the loveliest area of the city we have seen.  After the plaza, we walked the colonial streets, dodging construction, until we reached the plaza near the opera house.  There were many sidewalk cafes and another bandstand.  The plaza was surrounded by stunningly beautiful yellow-flowering trees.  We were early and the chef is cooking for us tonight, otherwise we would have probably stayed to enjoy dinner on the plaza.   This area will be very full later in the day. 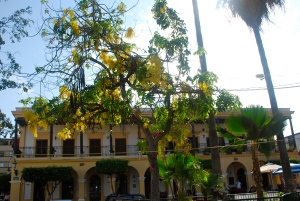 Our fishermen were tired and all of us were hot, so we went back to the house to enjoy a nap and late dinner.  We celebrated our hosts’ 49thwedding anniversary tonight and included in our group were some of their local friends.  Lots of wine flowing and wonderful food, providing a special end to another lazy day in paradise. 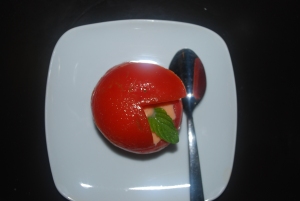 I am a retired attorney who loves to travel. Several years ago I began working on a Century Club membership achieved by traveling to 100 "foreign" countries. Today, at 49 years of age the count is at 82. Many were visited on land based trips. Some were cruise ports. Some were dive sites. Most have been fascinating.
View all posts by travelbynatasha →
This entry was posted in international and tagged Mazatlan. Bookmark the permalink.