Headed home from Vietnam during COVID-19

Photo ©Jean Janssen. The Nha Rong or Dragon House was established by the French in 1862 as a house of trade at its own harbor. It is now the Ho Chi Minh Museum, Vietnam

Today we are trying to get home to Houston Texas from Vietnam as worldwide panic has set in over COVID-19.  Boris was convinced that he would sleep through the night knowing we had flights in the morning.  It didn’t work for me.  I kept thinking about all the things that could happen.  For the third night in a row, I didn’t get more than 3-4 hours of sleep.  I got up several times just to make sure that the flights were still going as scheduled.  Finally at 6 am on Sunday morning I hung it up and just got dressed for breakfast.

Boris and Natasha aboard the Saigon Princess. Note the changing lights of the Times Square building on the left and the Vincom Landmark 81 tower on the right.

We went down at 6:30 am and briefly saw our travel companions who were having breakfast and trying to make arrangements to have a room to change in when they got back from the tunnels and before they went to the airport.  After breakfast, I packed.  Later in the morning I went down to check out the pool because I really didn’t want to leave the hotel.  Boris went shopping and came back with a model junk.  The Park Hyatt Saigon has a beautiful pool, full sun and shaded seating areas and a great pool menu. 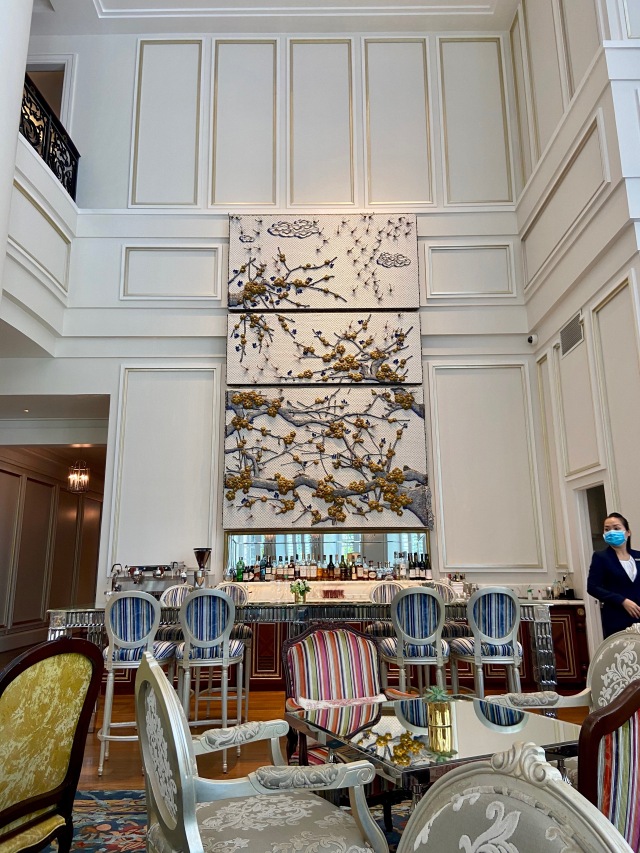 I went back for a shower and we were going to have lunch by the pool, but it was too hot by then to sit outside fully dressed.  We ended up eating off the bistro menu in the music salon off the lobby.  Once Boris was finished he went to the lobby and found out the driver was already there a half hour early.  So then Boris wanted to leave and I had to rush through the lunch, pay the bill, close out the hotel tab, and change my shoes.

The cruise line had arranged a driver and an English-speaking Uniworld representative to take us to the airport.  The cruise director saw us off at the front door of the Park Hyatt Saigon.  He handed me another mask, saying they wouldn’t let me move through the airport or fly without it.  He also told us to be prepared to be quarantined up to 14 days when we landed in Houston.  Check-in at the airport was easy.  Since we are Star Alliance Gold and EVA Air is a member of Star Alliance, we had the benefit of no line at check-in.  The representative was efficient but not friendly.  At that point the plane was still scheduled to take off on time.  I saw a bunch of people watching security inspect the checked bags.  Made me wonder if we would see ours again. 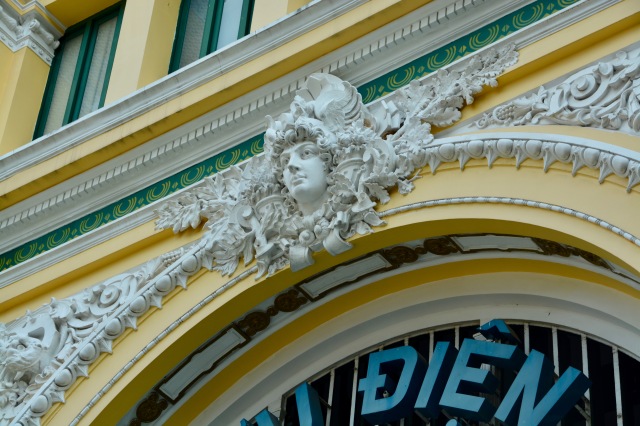 We had found out that Vietnam had cancelled all e-visas.  We were ok since we were already in the country but when we went through passport control I wondered what would happen if the flight got cancelled.  Would they let us back in?  Next was airport security.  It was set up with what looked like 20+ lanes, but they were only operating two due to the reduced traffic.  I tried to ask a question but none of the security agents would acknowledge or talk to you so I just had to guess what they wanted me to do.  We made it through with minimal delay.  I wasn’t exactly comfortable though.

There was a lounge area so we went to wait there.  We could see our plane at the gate next to the Rose Lounge.  There were lots of food and drink choices, but I just couldn’t eat or drink anything.  At some point, Boris observed that I had been so calm through this whole ordeal.  I told him the truth; I was worried every step of the way but I knew he was nervous and our family back home was nervous and I just needed to keep the facade of calm for their sake.  He told me to keep it up.

We boarded the plane to Taipei; it was packed.  Everyone was wearing a mask.  We texted Rocky to let him know our status.  We took off and landed early in Taipei.  At least I was no longer in a communist country.  We had a two-hour layover this time.  We reversed our process from the early morning hours on Thursday.  Same security check as last time, but there were a lot fewer people at the security check-point this time.  We passed by the lounge to find the gate.  It wasn’t opening until 1 hour before the flight, so we ended up sitting in the waiting area for the Los Angeles flight.  Lots of nervous Americans.

When our gate area opened we went to that waiting area.  I ended up in line next to an American couple who started talking about scuba diving so I asked them if they were there for a dive trip in an effort to distract myself from how nervous I was about getting home.  They told me that they had planned to dive, but they were forced to go home because of the cancelled visas and an incident that had happened at their hotel. 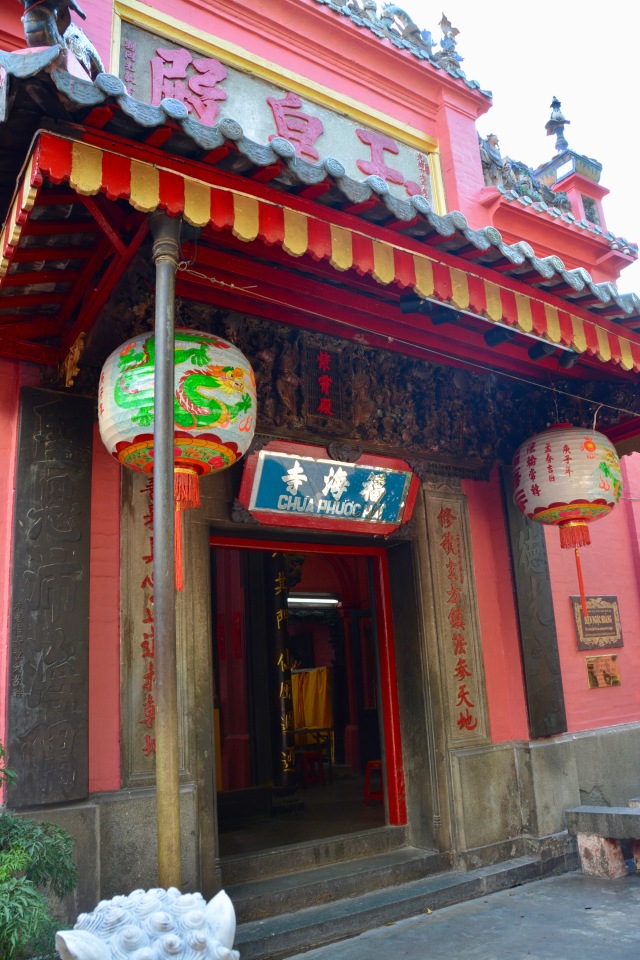 The tour operator had come to their room and told them to throw everything into their bags and be downstairs in 5 minutes.  They were told not to go to the desk and check out.  When they got outside, everyone from the tour was there and they were quickly loaded into vehicles and took back roads to get out of the city.  Apparently one of the quests at the hotel had tested positive for COVID-19 and the police were on the were way to pick him up and quarantine everyone in the hotel.  They told me that they had not had contact with the individual, but I backed up anyway.

Fortunately they were not seated next to me on the plane.  The middle seat on my row was open, but I didn’t have the whole row.  This flight was much more crowded than when we came in.  I think it was people like us who wanted to get out while they still could.  We texted Rocky again to let him know our status.  Once we were underway, my only concern was whether I would be quarantined in the US.  My situation was no where near as serious, but I was reminded of the takeoff scene in the movie ARGO. 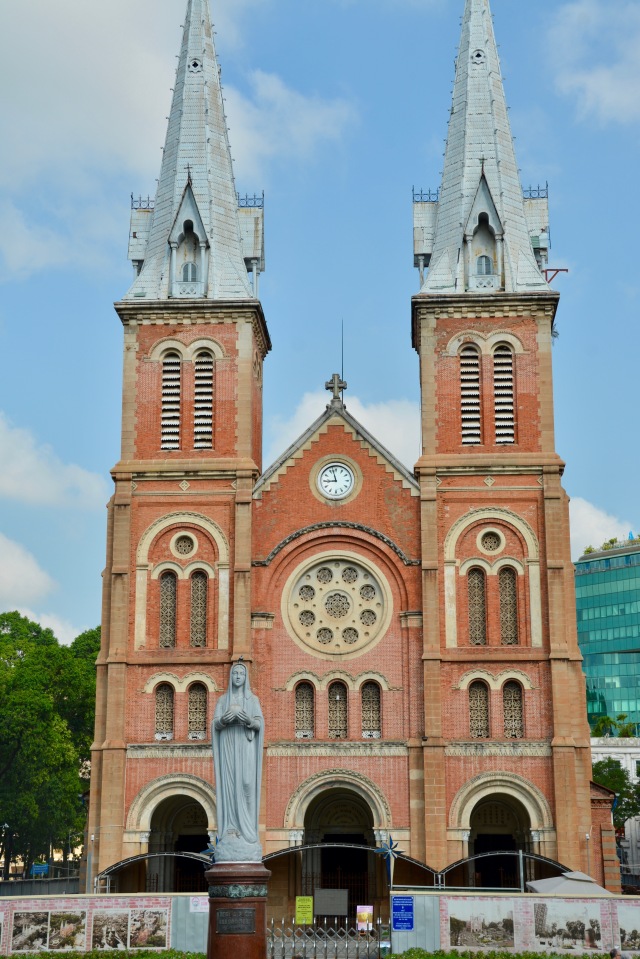 Well I made it to Houston.  Now to see what would happen regarding a medical inspection.  There were no medical forms to fill out on the plane.  I wasn’t sick and wasn’t running a fever, but Boris gave me two aspirin anyway just to be safe.  We had told Rocky not to come to the airport until after passport control because we didn’t know how long the process would last or if we would be quarantined.

I headed to passport control.  I have global entry.  I got my sheet but there were no questions to answer; the machine just took my picture.  It looked like the global entry checkpoint was closed even though the machines were operating, but then I found the opening around the corner-probably just a staffing issue.  It was just before 11 pm.  When I got to the desk, all he asked was if I had anything to declare.  I told him I wasn’t there long enough to buy anything (the truth).  That was it.  No temperature check.  No questions about what countries I had visited.  No medical questions.

I went downstairs and collected my luggage.  All of our items made it to Houston.  There was still customs, but they didn’t even stop us.  I didn’t see them stop anyone.  In all my travels, that was the fastest I had ever cleared immigration.  I found it kind of scary that we weren’t doing more as a country to prevent the introduction of the virus through returning US citizens who had been abroad or visitors.  I have been told that it is completely different if you are coming in from Europe. 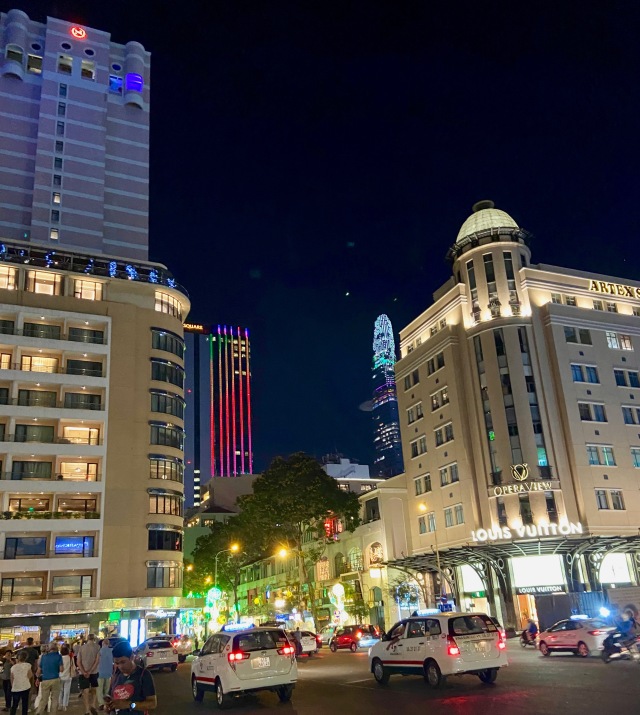 We contacted Rocky and he came out to pick us up.  While we waited inside next to a man whose daughter was coming in on our flight (she made it), I was really thirsty but I was afraid to cough in case someone would turn me in.  No one was wearing a mask.

Some family members refuse to see me, but I won’t mention Emma by name.  I am practicing social distancing and have self-quarantined although I have gone to Costco and the grocery store for food and supplies.  There is widespread panic here.  Everything is closed.  But I am home. Two days after we left Vietnam they closed the border.

Photo ©Jean Janssen. The Nha Rong or Dragon House was established by the French in 1862 as a house of trade at its own harbor. It is now the Ho Chi Minh Museum, Vietnam

I am a retired attorney who loves to travel. Several years ago I began working on a Century Club membership achieved by traveling to 100 "foreign" countries. Today, at 49 years of age the count is at 82. Many were visited on land based trips. Some were cruise ports. Some were dive sites. Most have been fascinating.
View all posts by travelbynatasha →
This entry was posted in cruises, international, River Cruise and tagged Ho Chi Minh City, Houston, Saigon, Uniworld, Vietnam. Bookmark the permalink.