The German Corner and Castles on the Rhine

Posted on February 11, 2020 by travelbynatasha

Our second full day of the Christmas market cruise began with a stop at the German Corner where the Rhine and Moselle Rivers meet.  The landscape is dominated by the Ehrenbreitstein Fortress on one side of the Rhine and the Statute of Kaiser Wilhem I sitting on horseback atop a pedestal on the opposite side where the rivers converge.  We detoured onto the Moselle to dock along its banks at the city of Koblenz. 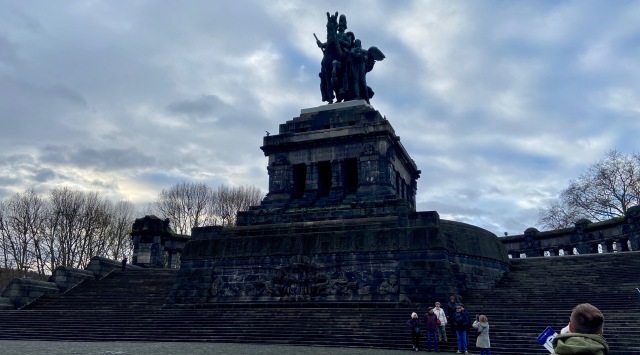 Photo ©Jean Janssen. A replica statute of Kaiser Wilhelm I erected in 1993 (after the original was destroyed during WWII) at Deutsches Eck (German Corner) where the Rhine and Moselle Rivers meet.

The Teutonic Order founded one its command posts here in the 13th Century and the statute was added in the 19th Century to honor that history and “to rouse German nationalistic fervour”.  The statute had been destroyed during the war.  With the history of its purpose in mind, it is no surprise that after WWII it was many years and arguments later before the statute would be replaced (in 1993). 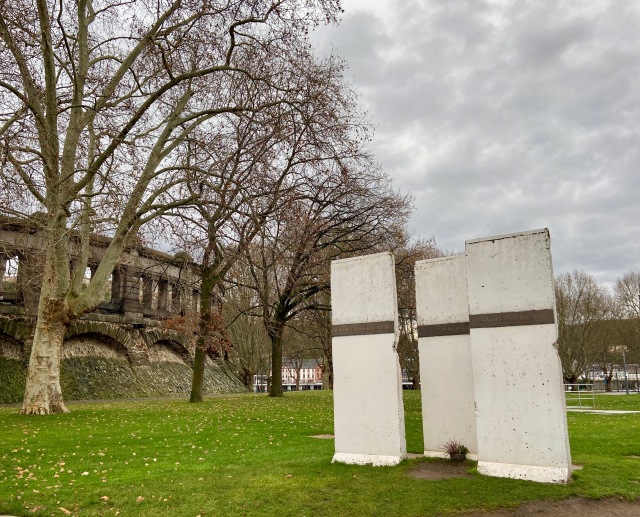 Photo ©Jean Janssen. Sections of the Berlin wall along the Moselle waterfront in Koblenz, Germany

Leaving the ship for our land tour, we made a stop beside three segments of the Berlin wall that had been removed and erected here.  Walking along the water front, there was more attempts to symbolize unity with the flags of several nations flying along the water’s edge.  We made a stop at the monument before turning the corner to walk along the Rhine.  On my last visit we took the cable car across the river for a visit to the Ebrenbreistein Fortress.  I recommend both the cable car ride and the fortress visit. 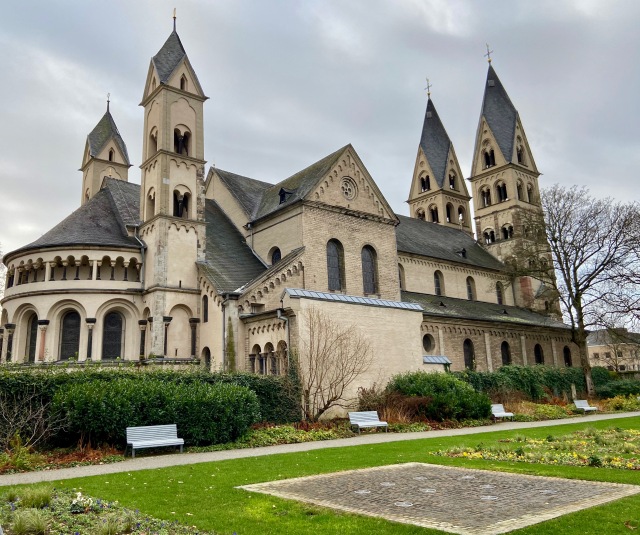 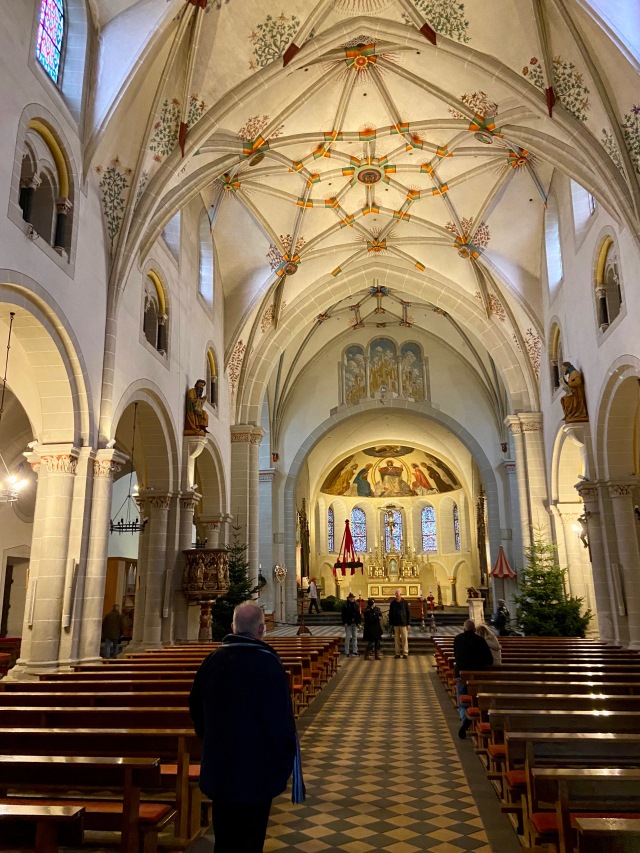 Touring Koblenz, we stopped at the Basilica of St. Castro, formerly part of a monastery that stood here.  Although we saw the exterior on our last visit, this time we were able to go inside and enjoy the church with its modest advent decorations.  The facade features beautiful Romanesque towers.  The Basilica is a UNESCO World Heritage Site and the oldest church in Koblenz.  “It was at this place in 842 that 110 representatives negotiated the division of the Frankish Empire.” 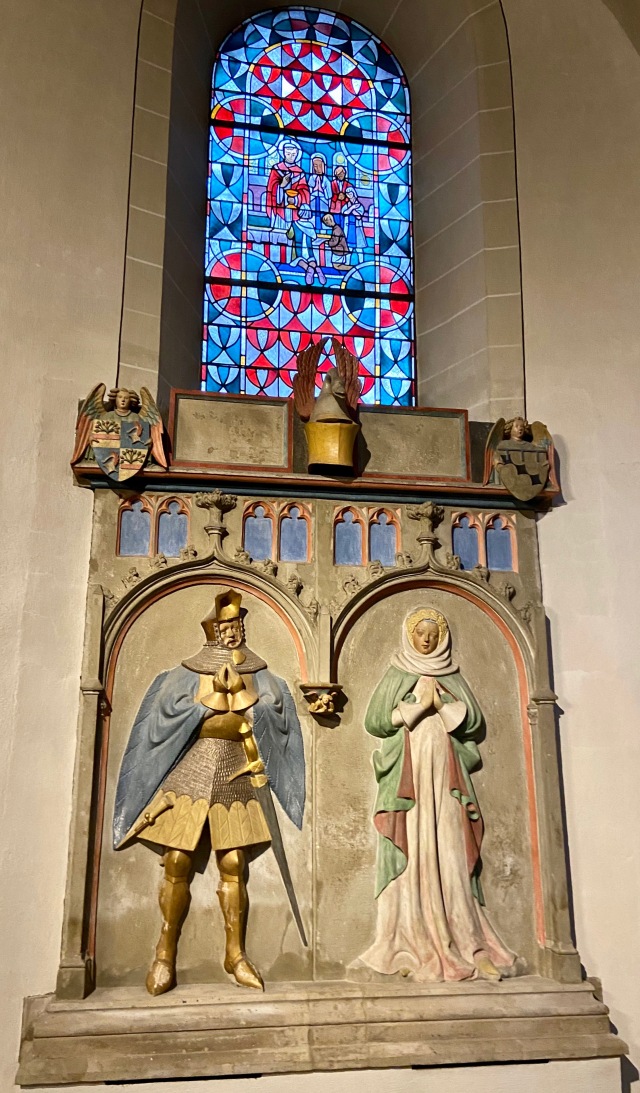 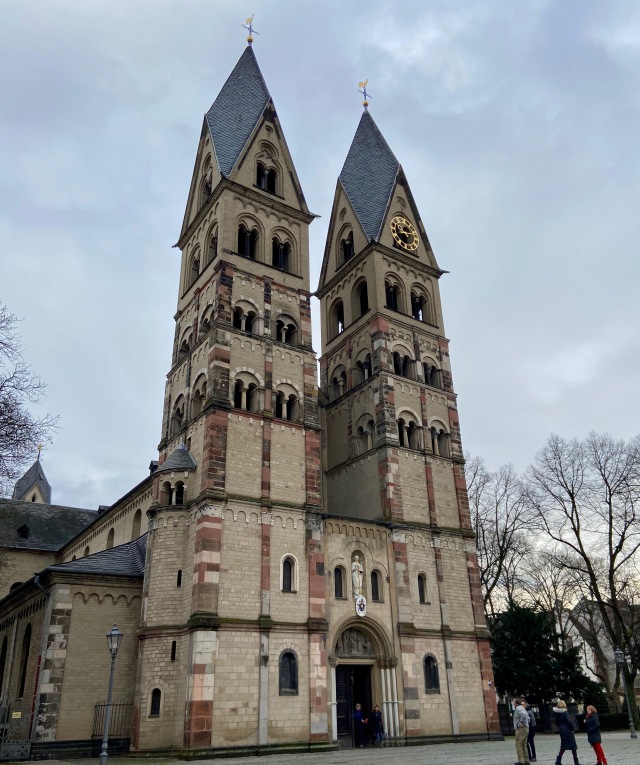 Photo ©Jean Janssen. View of the Romanesque towers of the Basilica of St. Castro in Koblenz, Germany

Leaving the Basilica, we toured through parts of Koblenz, with our guide noting the locations of many of city’s Christmas markets.  We saw the “Schangel” fountain in the courtyard of the town hall (Willi-Horter Platz) depicting a spitting boy in reference to one of the Schang boys (slang reference to the boys born during the French occupation).  I was more intrigued by the Renaissance and Baroque Jesuit Buildings.  The town hall is the former Jesuit College, with towers on either end and a beautiful portal in the middle.  The Jesuits had a presence in Koblenz for almost two hundred years before they were expelled in 1773. 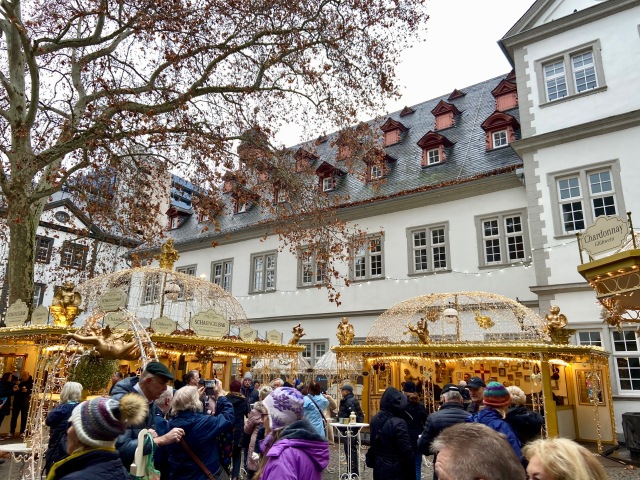 Photo ©Jean Janssen   Some of my favorite decorations were in this market near the Jesuit College where everything was in gold and white.  Koblenz, Germany 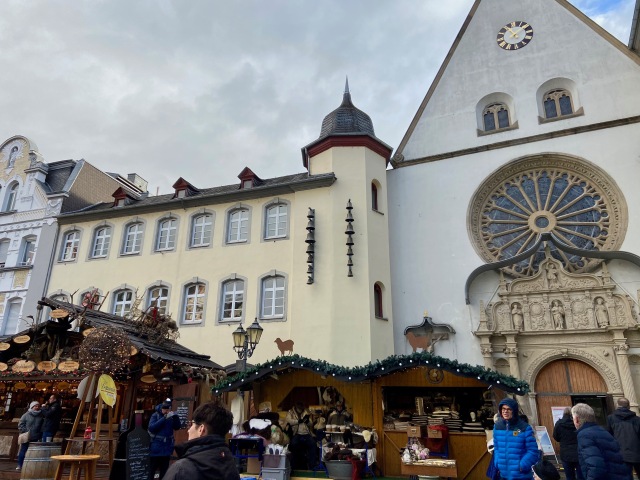 Photo ©Jean Janssen. The Jesuit church, built in 1610,  is tucked into a corner of Jesuitenplatz in Koblenz, Germany. 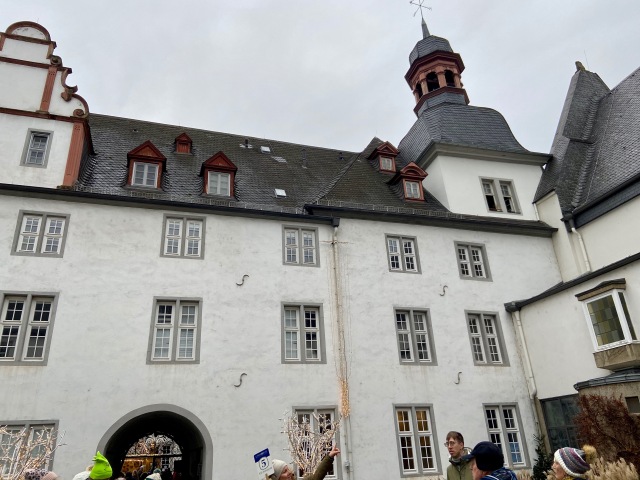 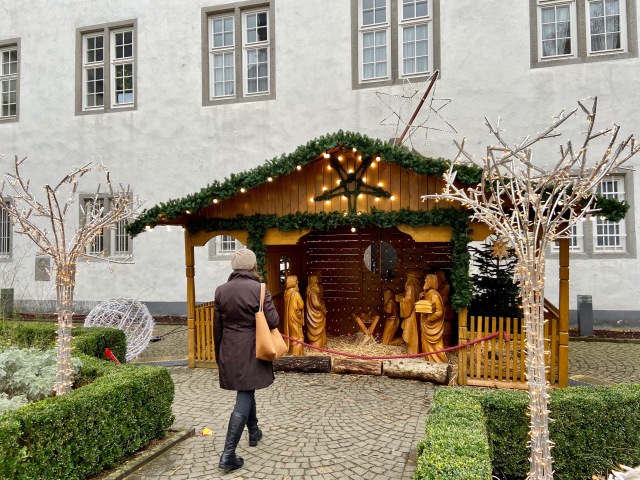 Photo ©Jean Janssen. I could only catch a glimpse of the Liebfrauenkirche in Koblenz, Germany.

We also caught a glimpse of the Liebfrauenkirche.  After our tour, we had time to walk around the town and visit the various Christmas Markets.  I bought only a few things, some unique jewelry and an ornament.  Since the markets are in the various squares, often beside a church, I got to sightsee while shopping. 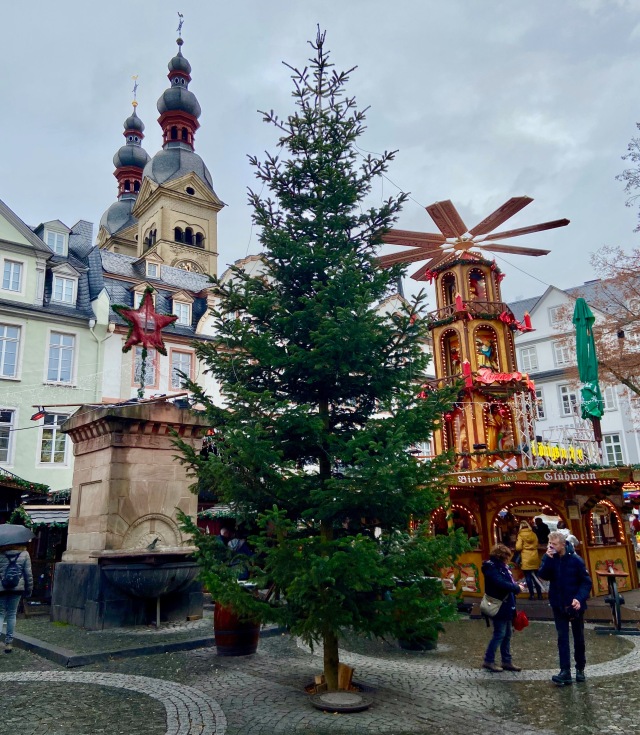 Photo ©Jean Janssen Christmas Market in Am Plan Square with the onion towers of Liebfrauenkirche in the background, Koblenz, Germany 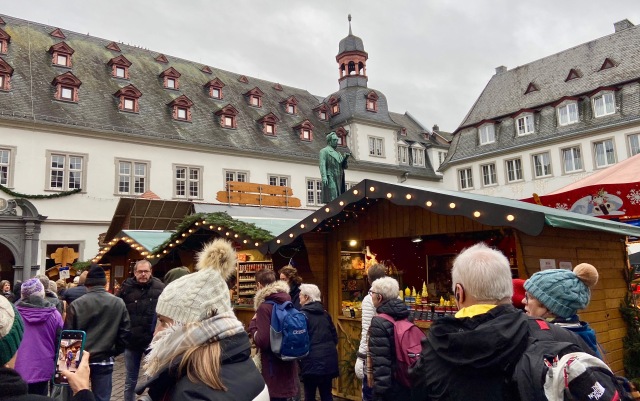 Market in Jesuitenplatz. The former Jesuit College is now the town hall, Koblenz, Germany. The Jesuits were in Koblenz for almost 200 years until they were expelled in 1773. 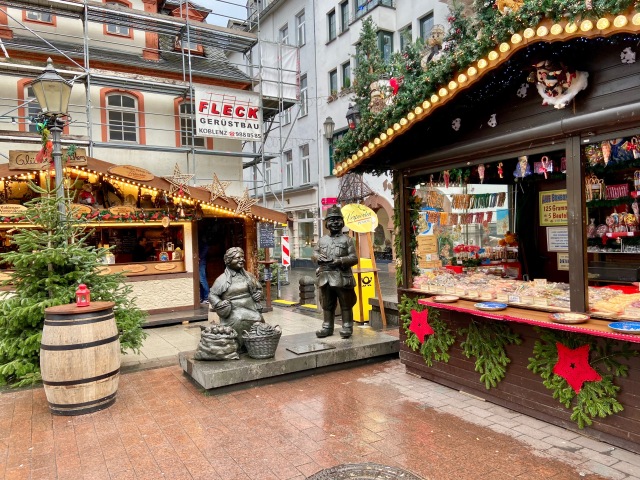 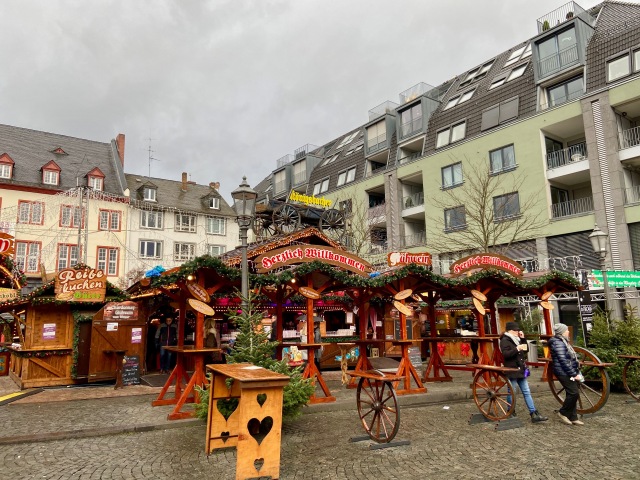 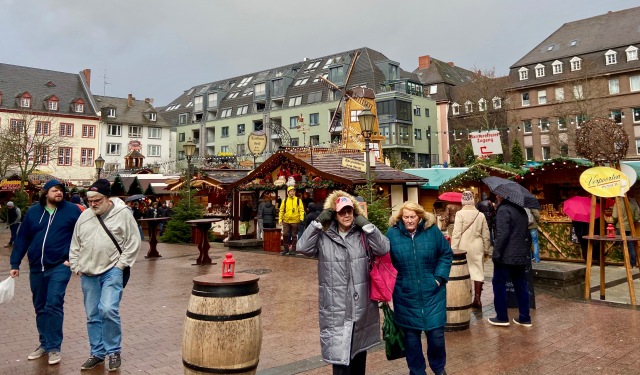 Much of Koblenz was destroyed during WWII, but I spotted a few architectural finds that depicted a traditional Germany city. 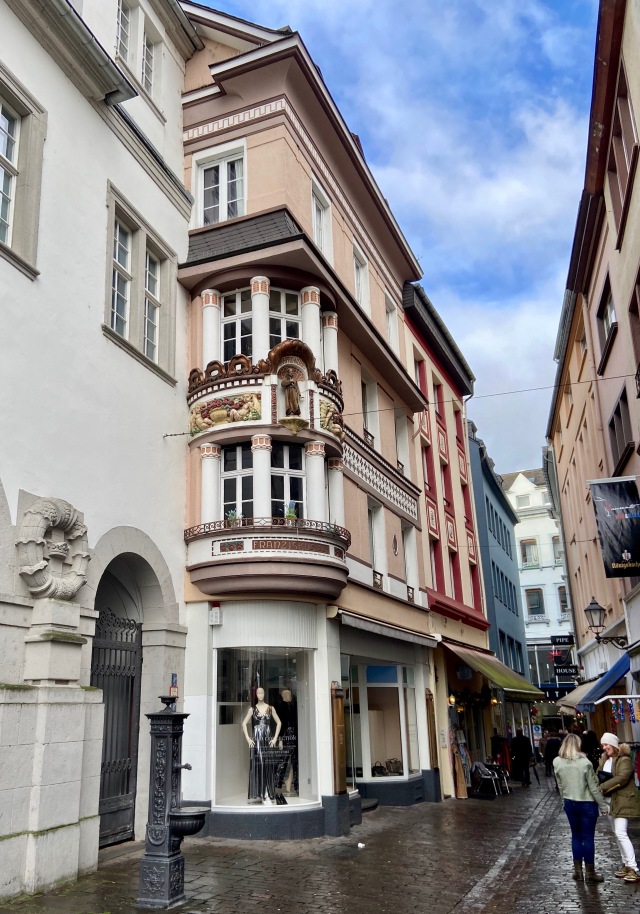 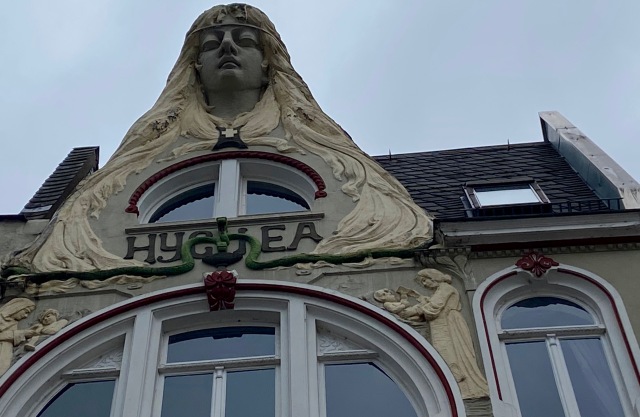 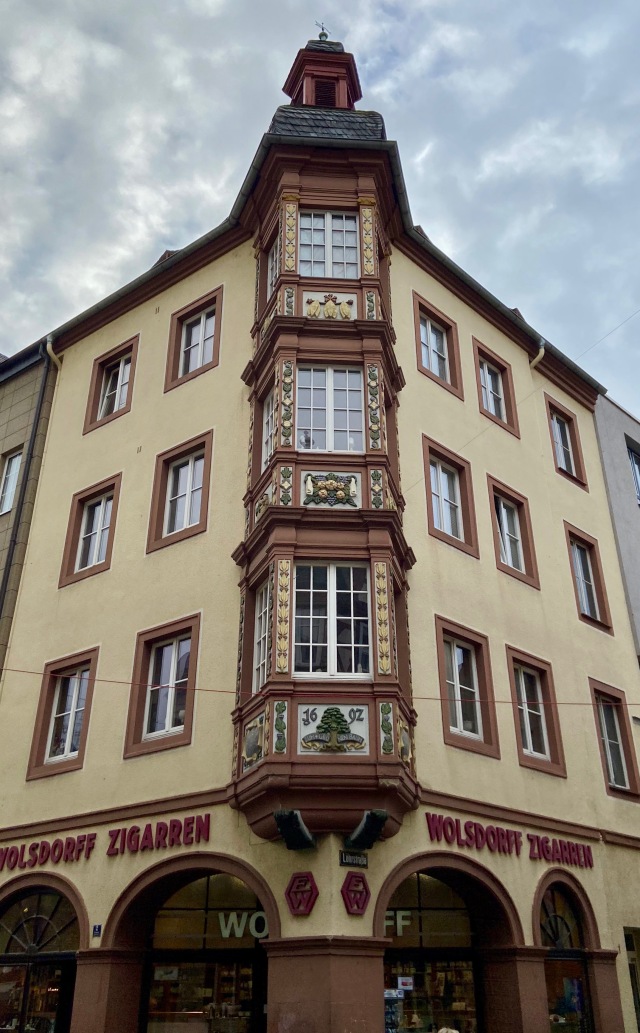 All too soon it was back to the boat for our lunch of German sausages and our scenic tour of castles on the Rhine.  Even though I have been to Koblenz before, this morning was an interesting look at this charming city during the holiday season. 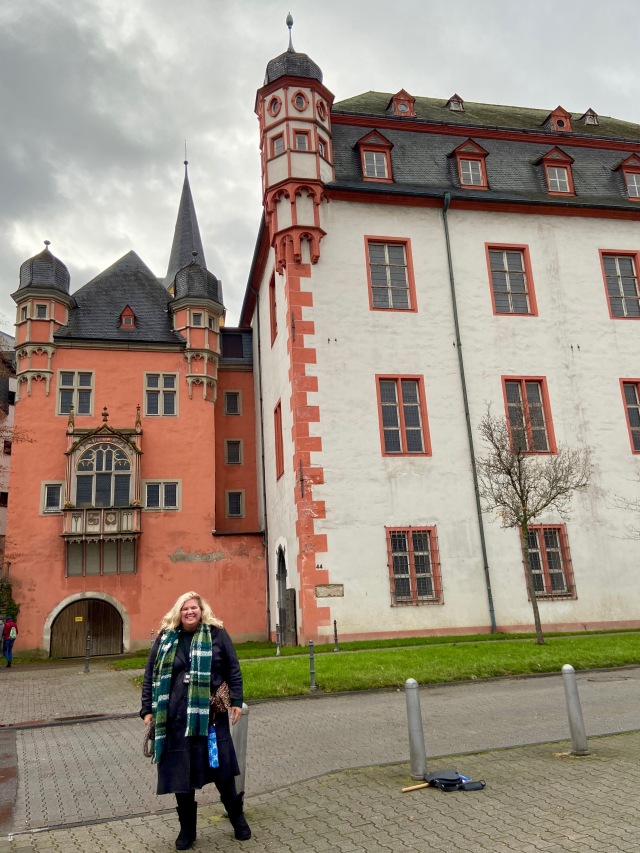 I saw our guide as I began my walk back to the ship and she took this picture of Natasha-with scarf, hat, boots, crossbody bag and a dangling umbrella- along the waterfront of the Moselle River in Koblenz, Germany.

Only minutes after leaving Koblenz, we came to a lovely castle on the Rhine, Schloss Stolzenfels.  Schloss means castle in German.  It was built in the 14th century, but was destroyed in the 17th century by the French during the Nine’s Years War.  Eventually the land was gift by the city to Frederick William IV of Prussia in 1823.  He rebuilt the castle in a romanticized Gothic-Revival Style.  Today you can tour the fairytale castle by taking a winding garden path.  Going inside this schloss is just one more reason for Natasha to return to Koblenz. 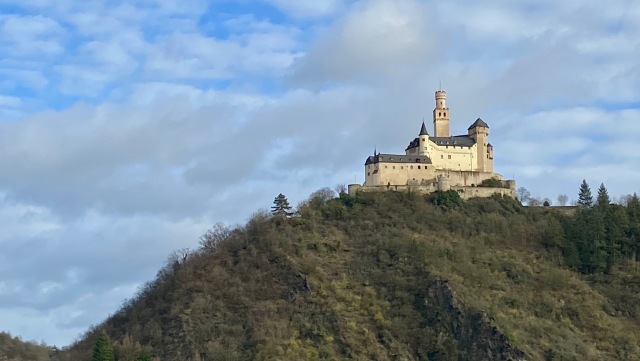 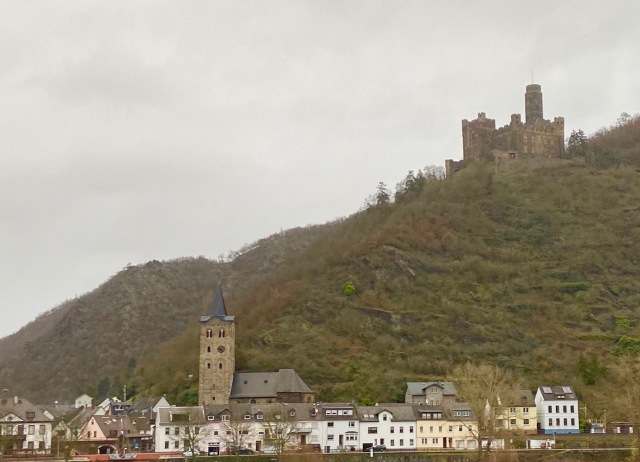 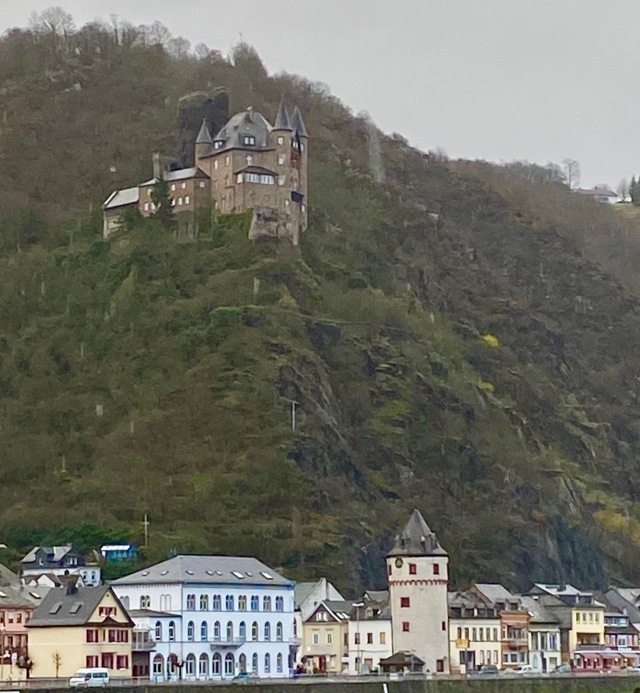 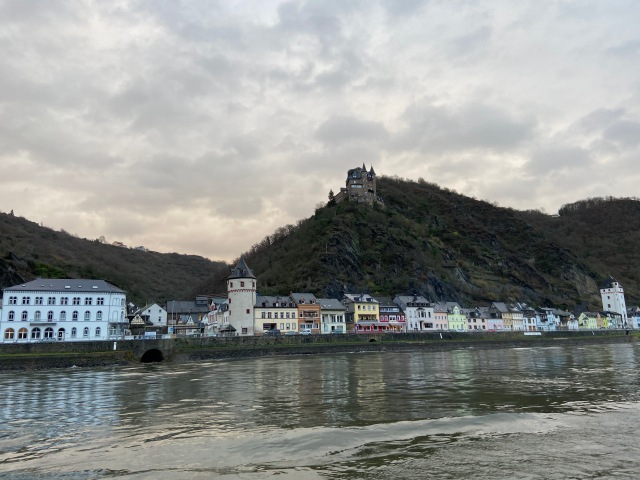 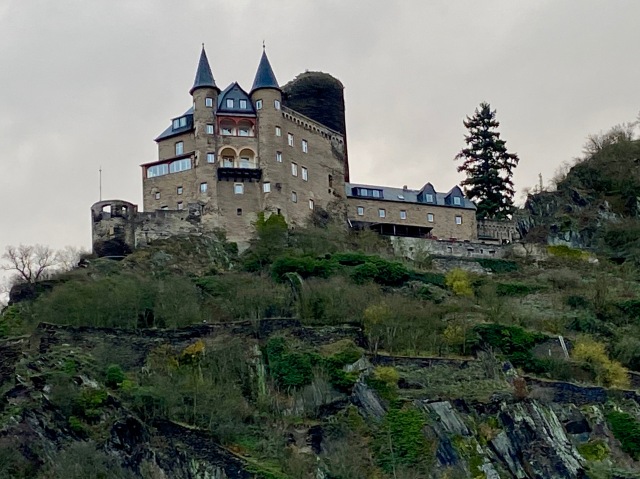 For the next several hours, we sailed along the river with commentary by our cruise director and had the opportunity to see the many castles along the Rhine.  Last time I came in the summer and it was too hot to sit out for long.  Today it was too cold.  I braved it-bundled up-for as long as I could.  In addition to the castles, we saw an example of a German tradition.  It was not uncommon for people to head straight from church on Sundays straight to the brewhouse.  This location eliminated the delay by attaching the two buildings; the church and the brewery are connected. 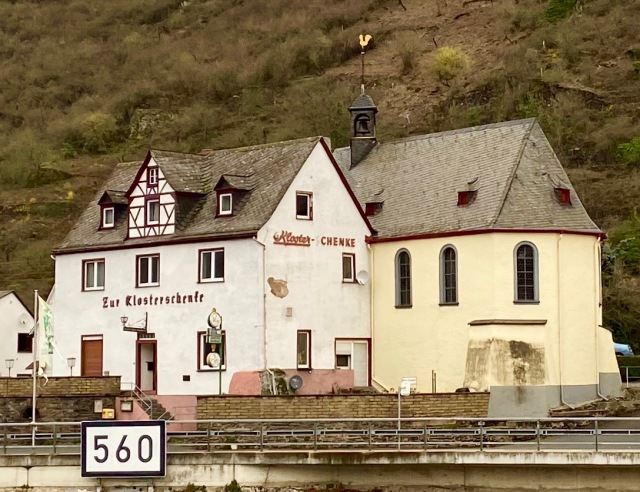 Photo ©Jean Janssen A match made in heaven? This brewery and church are attached to each other. Along the middle Rhine at mile marker 560, Germany. 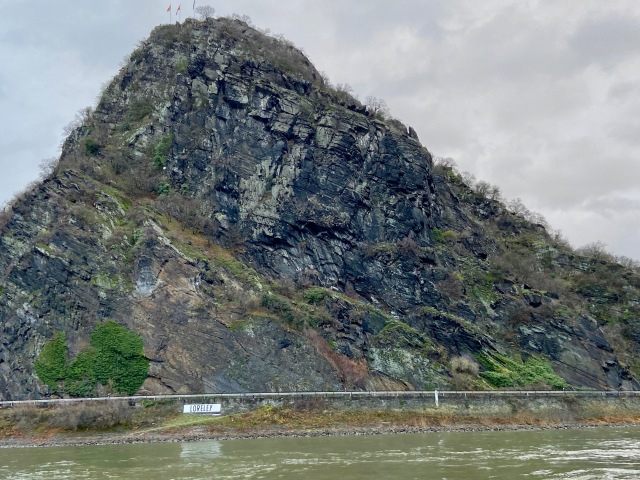 We also passed the famous Lorelei. Lorelei, or Loreley in German, is a “steep slate rock on the right bank of the River Rhine in the Rhine Gorge (or Middle Rhine) at Sankt Goarshausen in Germany.”  The formation of the rock contributes to a particular sound heard with wind travels around the corner.  Loreley is the subject of many legends, poems, and songs.  “An old legend envisioned dwarfs living in caves in the rock.” 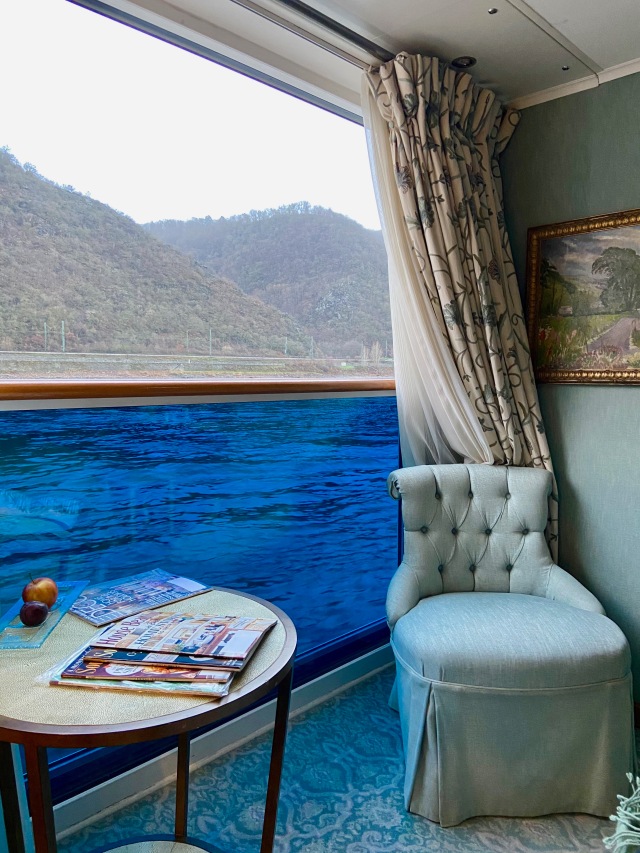 Photo ©Jean Janssen. When I got cold, I watched for some of the castles from the lounge and then  later through the Juliet window in my cabin.

“In 1801, German author Clemens Brentano composed his ballad… [which] told the story of an enchanting female associated with the rock. In the poem, the beautiful Lore Lay, betrayed by her sweetheart, is accused of bewitching men and causing their death. Rather than sentence her to death, the bishop consigns her to a nunnery. On the way thereto, accompanied by three knights, she comes to the Lorelei rock. She asks permission to climb it and view the Rhine once again. She does so and thinking that she sees her love in the Rhine, falls to her death; the rock still retained an echo of her name afterwards.”

“In 1824, Heinrich Heine seized on and adapted Brentano’s theme in one of his most famous poems, “Die Lorelei”. It describes the eponymous female as a sort of siren who, sitting on the cliff above the Rhine and combing her golden hair, unwittingly distracted shipmen with her beauty and song, causing them to crash on the rocks.”

Accidents at the dangerous corner only reinforce the legends. In 2011, a “barge carrying 2,400 tons of sulphuric acid capsized…near the Lorelei rock, blocking traffic on one of Europe’s busiest waterways.”  Guess what was the easy target to blame?  After Loreley we were losing light.  We will dock in Rudesheim tonight where I am going on an Abbey wine tasing tour before touring the Christmas markets in the morning.  More to come… 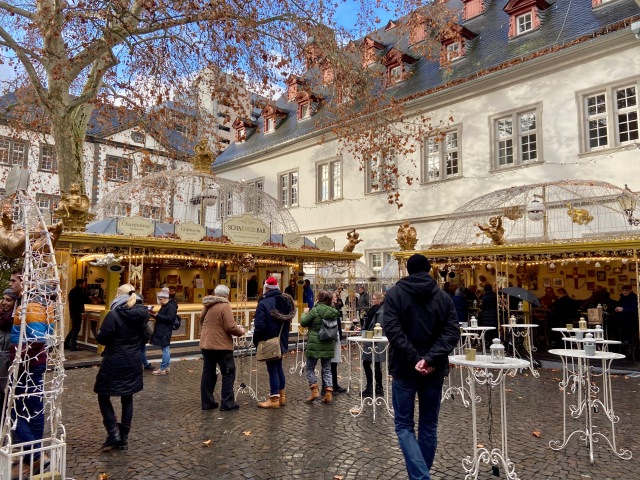 I am a retired attorney who loves to travel. Several years ago I began working on a Century Club membership achieved by traveling to 100 "foreign" countries. Today, at 49 years of age the count is at 82. Many were visited on land based trips. Some were cruise ports. Some were dive sites. Most have been fascinating.
View all posts by travelbynatasha →
This entry was posted in cruises, international, River Cruise and tagged Basilica of St. Castro, Castles on the Rhine, Deutsches Eck, German Corner, Germany, Kaiser Wilhelm I, Koblenz, Rhine River. Bookmark the permalink.