The Principality of Asturias, Spain

Posted on September 20, 2019 by travelbynatasha

Today we are docked in Gijon in the Bay of Biscay for a tour of the Asturias providence of Spain.  This is our last stop before reaching the port of Lisbon, Portugal where we will disembark.  We are doing the lazy panoramic tour by bus today.  Boris chose.  I would have gone for the kayak tour.  The other option was a apple orchard with cider tasting.  Cider is to Gijon and the surrounding region of Asturias as wine is to Bordeaux.  It holds another distinction; Gijon has the honor of having the largest number of bakeries per capita in all of Spain.

Photo ©Jean Janssen. Near the shuttle bus stop along the waterfront in G, Spain.

There is a shuttle bus into the port city of Gijon and quite a few of the cruise passengers are not doing organized tours today.  During our drive through, I didn’t see much to do in the city so we probably made the better call going a bit farther afield.

Photo ©Jean Janssen. The sun was just rising as I had my breakfast on the balcony as we entered the industrial port of Gijon, Spain.

We are in smaller buses that can make some of the turns needed on our route.  Usually by the end of the cruise you recognize lots of people on your tours.  I didn’t recognize a single person; we have been doing (at least some) higher energy excursions.

Our first destination was the industrial city of Aviles and a drive by the Oscar Niemeyer International Cultural Centre that sits along the city’s natural seaport.  The city’s goal was for the center to springboard revitalization to this industrial area.  It is an odd-looking modern building by award-winning Brazilian architect Oscar Niemeyer that didn’t do anything for me.  That was 45 minutes of my life wasted.  Perhaps if the guide had told us more about what was done or actually made a stop rather than just name dropping (Brad Pitt) celebrities that have visited.  I took the photo out the bus window on the drive by.  We didn’t make any stops in the city. Next we climbed (by bus) to a lookout point on Monte Naranco for a panoramic view of the region.  Oddly for a bus tour that caters to those with mobility issues, the driver stopped in a valley that meant you had to walk up to the lookout point or up the opposite direction to reach the statute of the Sacred Heart of Jesus reminiscent of that found in Brazil, at least that was the guide’s comparison.  The statute is 114 ft (35 m) tall.  The roadway on Monte Naranco is also the site of the finish of famous Spanish bicycle races Subida al Naranco and Vuelta a España  It is a steep climb with some serious switchbacks.

Photo ©Jean Janssen. This 114 statute of the Sacred Heart of Jesus stands in the mountains outside Oviedo, Spain

From Monte Naranco, you have views of the Asturias capital of Oviedo.  I walked through the damp grass in an effort to get a clear shot, but mostly got electrical wires.  I actually found the opposite side with the morning mist more picturesque.  Some members of our group made the walk up to the statute.  I got about half way and realized that I could not make it up and back in the allotted 15 minutes, so I headed back down.  No one made it in the allotted time.  We were there at least 30 minutes waiting for everyone to get back.  I should have gone. 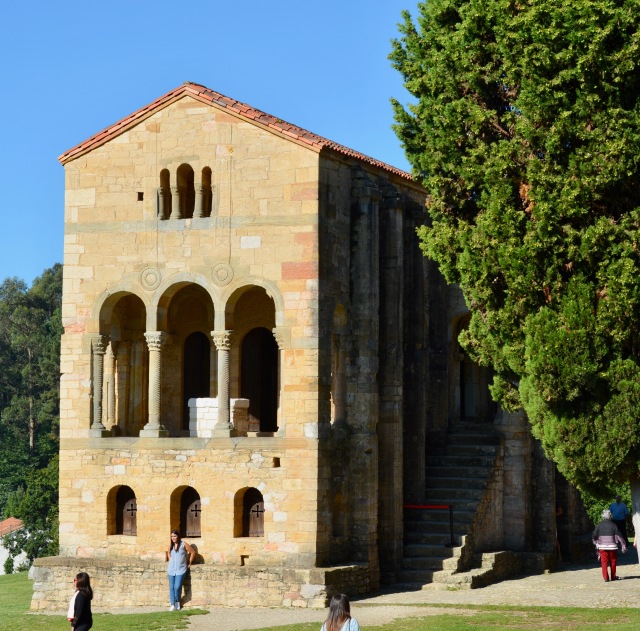 Along to the road are the Pre-Romanesque shrines, Santa María del Naranco and San Miguel de Lillo, dating from the Kingdom of Asturias.  We had to ask, but on the way back down we made a 3-minute photo stop at Santa Maria del Naranco church completed in 842 and consecrated in 848.

Next it was down to Oviedo, the capital city of Asturias.  “The Kingdom of Asturias began in 720, with the Visigothic aristocrat Pelagius’s revolt against the Muslims who at the time were occupying most of the Iberian Peninsula. The Moorish invasion that began in 711 had taken control of most of the peninsula, until the revolt in the northern mountains by Pelagius. The resulting Kingdom of Asturias, located in an economically poor region of Iberia, was largely ignored by the Muslims.”  The area where Oviedo is located was uninhabited at that time.  The city was founded in 761 by two monks. 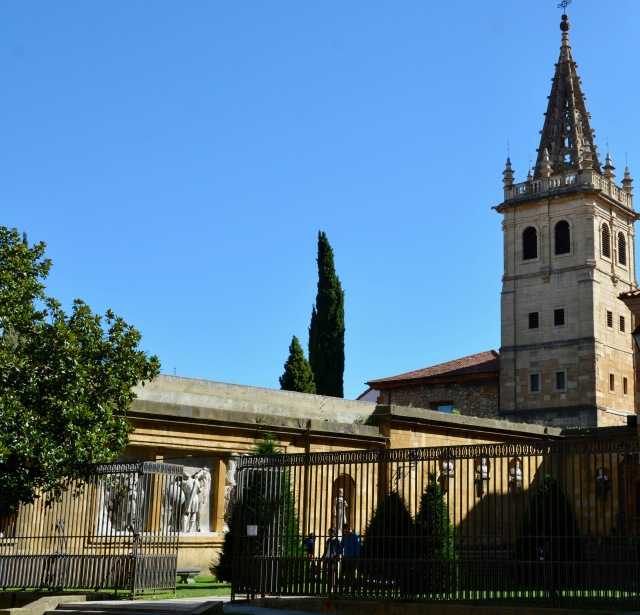 Oviedo was to be the highlight of the tour.  Boris and I agreed that we would rather have spent the whole day here.  We just got a taste in the 30 minutes of free time we were allowed.  After I located and waited in line for a toliet (free in the city market-go upstairs), I was down to 20 minutes so I just walked around and took pictures.  I really wanted to go into the Cathedral-6 euro charge-but there just wasn’t time. We met back at the large square by the Cathedral before heading to the bus.  On the way out of the city, the guide told us about the cider production in the region and all the apple orchards.  She said she would give us an opportunity to try it and that is where everyone thought we were heading.

Instead we climbed a narrower and narrower road that became rutty and very steep. At the top, there was another lookout and not a cider vendor in site.  We are at the top of Picu Sol.  There were two young women who had made the climb on horseback and were resting their horses.  This time we had views of the city of Gijon and the bay.

Photo ©Jean Janssen Resting after the climb near Gijon, Spain

Photo ©Jean Jansen At the lookout point over Gijon, Spain a map let you know what you were seeing.

Photo ©Jean Janssen Headed back down the mountain.

Going back to Gijon, we passed through village where the land was owned by the families of former miners.  The mining infrastructure is still there but no longer in operation.  We saw orchards along the road and traditional horreos, grain storage rooms on stilts.  There is estimated that there are still about 10,000 in existence.  These were similar to the ones I had see at the Village Museum in Bucharest. 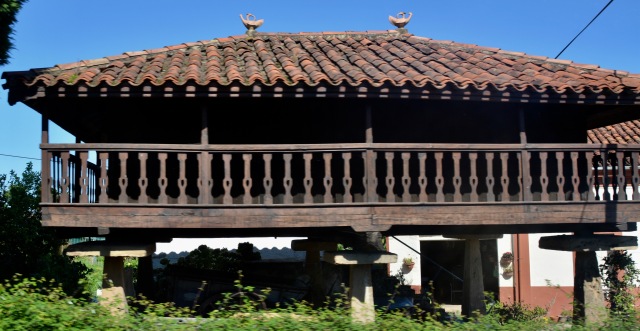 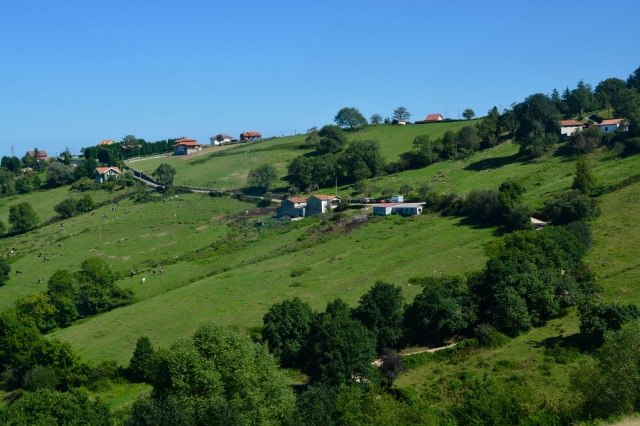 Photo ©Jean Janssen. Homes and orchards near Gijon, Spain owned by the families of former miners.

We made our way back to Gijon and were going into town when one of the women asked when we would be back (we were already a half hour late at this point) as she needed a toilet.  The guide announced that she was taking us into town to get apple cider.  There was a minor revolt.  When the bus stopped in town and the guide told us we had 15 minutes, people actually started screaming NO, NO, NO.  Boris had moved to his own row in the back of the bus and I have no doubt he was among the chanters.  People were ready for their late lunch.  Since we could come back into town by shuttle if we wanted, people preferred to go back.  I would have liked the cider, but I wisely kept quiet given the angry mob.  As it was, we got back an hour late. I would need to do a little more early research if I was going to visit this area again.  As it was, we visited the three largest cities in Asturias.  Not sure I would return to or recommend a visit to Aviles.  I would definitely have liked more time in Oviedo.  I enjoyed visiting this region of Spain which was new to me.  Our cruise comes to end after a sea day.  Today it is adios to Spain. I am a retired attorney who loves to travel. Several years ago I began working on a Century Club membership achieved by traveling to 100 "foreign" countries. Today, at 49 years of age the count is at 82. Many were visited on land based trips. Some were cruise ports. Some were dive sites. Most have been fascinating.
View all posts by travelbynatasha →
This entry was posted in cruises, international and tagged Asturias, Aviles, Gijon, Monte Naranco, Oscar Niemeyer International Cultural Centre, Oviedo, Santa Maria del Naranco, Spain. Bookmark the permalink.