Posted on April 2, 2018 by travelbynatasha 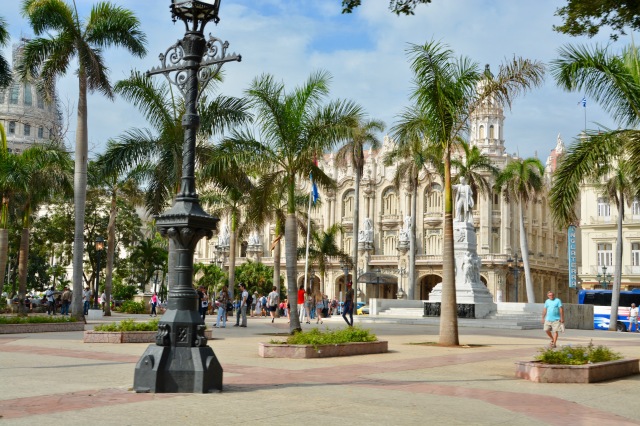 One of the United States’ closest southern neighbors, the Republic of Cuba is a small communist nation.  Cuba is an island that sits in the Caribbean Sea bordering the Atlantic Ocean. Its early history is of Spanish Conquest of the native tribes. Spain, England, and even the United States have overseen this land. Americans invested heavily in Cuba and it was their play land. At one time, there was some thought to making Cuba a state of the United States of America. In 1959, a revolution under the leadership of Fidel Castro ousted Cuban President Batista. Castro nationalized the American business holdings in Cuba and established relations with Soviet Russia, the start of the strained relationship between the two countries and the embargo imposed by the United States that still exists today.

I want to preface my comments for my international readers. Visiting Cuba is a unique experience for Americans, having long been denied the opportunity to do so by our own government. My comments will be colored by this history. We can now visit the country legally under very specific restrictions. 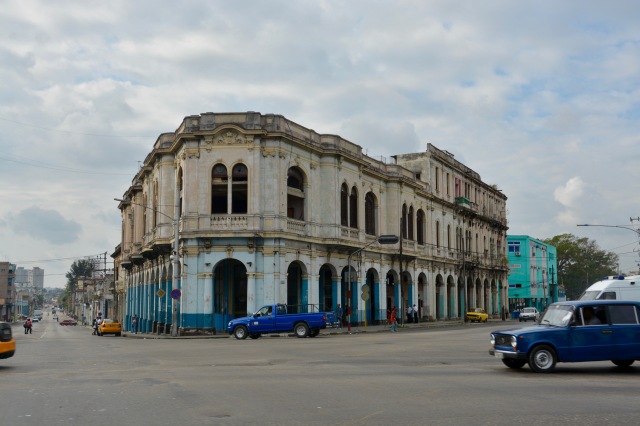 Havana is the capital of Cuba.   It sits west of center on the northern side of this long, narrow island shaped like a crocodile. Santiago de Cuba was at one time the capital; it is our other Cuban port of call on this cruise. Santiago is on the southern and eastern side of the island.

Diego Velazquez founded colonial Havana in 1515. It was named for a local Taino chief. It started as a trading post, but became the most active Spanish port in the 18th century. Its natural harbor had to be defended and the channel where our ship entered is lined with the remains of several Spanish forts. Our ship is docked at the San Francisco Terminal.

Boris and I had breakfast on our balcony today. We are heading out on separate tours.   Boris originally booked us both on the Hemingway Tour, but I wanted one that was more general. Ok, I admit that part of the attraction is that part of my tour takes place in an American classic car. Their American owners abandoned many of these cars-from the 40s and 50s-here when they had to flee the country. Many of these vehicles still have their original parts.

Boris loves Hemingway’s work. He has gone to many of the locations Hemingway frequented, especially in Paris. His selected tour is perfect for him. If I am lucky, I can talk him into going back to the Floridita this afternoon.

Princess Natasha is going to ride in style through Havana, Cuba

Today we checked in for our tour on the ship; so everyone on the tour is passing through customs and immigration at the same time. It was a much quicker process than last night. We were taken by bus to the Hotel Nacional de Cuba. Here we were allowed to pick our classic convertible (or “yank tank” as they are called by the locals). I chose a bright yellow 1951 Chevy Delux. I thought of my dad whose proudest bachelor possession was a 1960 white Chevy convertible. It was part of the reason he was able to snag my mom.

Photo ©Jean Janssen. Photo of the beautiful tile work in the lobby of the Hotel Nacional de Cuba, Havana

Each vehicle has a driver and a guide who sit in the front seat. In my case the driver was Eric who is also the owner of the car. He has an engineering background and maintains the car himself. It is in excellent condition. My guide introduced himself as George. With a puzzled expression I asked if that was the name his mother gave him. He showed me his nametag that identifies him as Jorge, but he gave me the English version. I called him Jorge. Princess Natasha sat in the back seat.

Havana is a city of crumbling Colonial architecture and warm people. The government has attempted to retain the colonial facades where possible, but in many cases completely demolished and rebuilt the interiors. This is often the cheaper process. In some parts of the city, the façade is crumbling but the interiors have been renovated because the building is “owned” by several families and no one of those families takes responsibility for the exterior. However, for the most part, the structures are just lived in as they stood with some “make shift” adjustments to provide power. Only 10% of the country enjoys air conditioning.

We drove first along the Malecon, the seawall “bench” enjoyed by the Cuban people each evening. We saw a lot of people out there at midnight on a weeknight when we returned from the Tropicana show. The breeze off the water and the socializing are the main attractions.

The city of Havana is divided into 15 districts. We started with the central district with a drive by the balcony from where Castro delivered his famous speeches and the building that houses the enshrined yacht on which Castro returned to Cuba. We were headed to Revolution Square where most of the large political rallies took place.

Photo ©Jean Janssen. Balcony in Havana, Cuba from which Fidel Castro delivered many of his famous speeches.

I wasn’t sure about the match between Jorge and I. He stopped talking every time I took a picture, although I told him I was listening. He said he didn’t want me to be distracted. This has disaster written all over it. I take a lot of pictures and Jorge does a lot of talking. I feared our tour might take twice as long as the other vehicles. 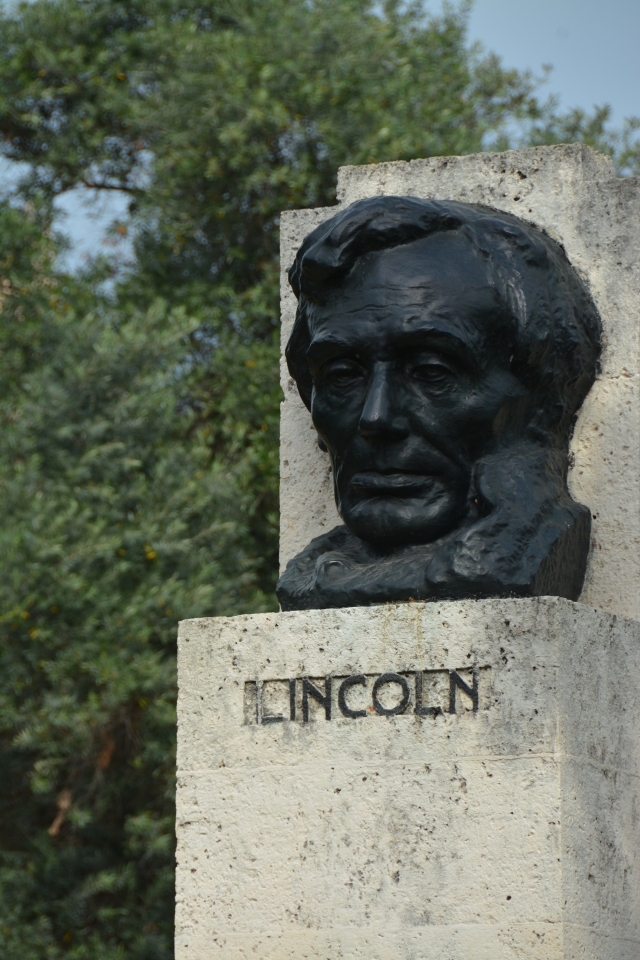 Photo ©Jean Janssen Bust of Abraham Lincoln in a Cuban Plaza in Havana.

We passed some beautiful colonial buildings with Spanish style interiors that have been restored like the Hotel Inglaterra (Hotel England), the oldest hotel in Cuba, and lovely plazas. We also passed the Capitelio that looks remarkably like the US Capitol Building. It is no surprise that it was built one foot taller than the US Capitol. Jorge was quick to point out a bust of Abraham Lincoln, beloved because he freed the slaves in the United States. The bust sits on a pedestal in one of the plazas. 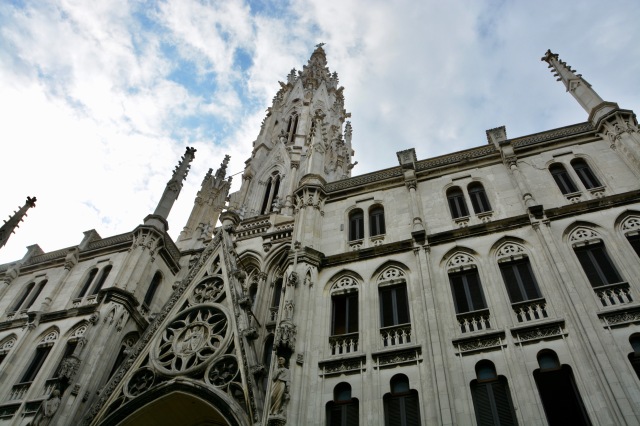 Jorge singled out all the hospitals we passed and the Cathedral. Almost 80% of the population is Roman Catholic; although I didn’t get the sense that the Cubans practice their faith, at least those that grew up under communism. Jorge told me that the churches were never closed as a result of the revolution or the coming of communism. For most of his life, Castro was an atheist and did not enjoy a good relationship with the Cuban priests. However, he would have faced a bigger threat from Rome if he sought to abolish the Catholic Church. Jorge claimed Castro sought to unite the goals of his revolution and the church by claiming they both sought to help the poor people. The first Cathedral was built in Havana in 1777 and the new catholic diocese created in 1787 also covered Florida and Louisiana.

Established in1728, the University in Havana is one of the oldest in the New World.  Education, even higher education, is free in Cuba if you test into the program. There is one exception. If you want to study foreign languages, you have to pay 20 pesos a month. It did not surprise me that this course of study incurred a cost in a communist country. We passed the university just before reaching Plaza de la Revolucion; we spent about 15 minutes at the plaza. The tall monument, the Jose Marti Memorial, is made of Carrera marble. For a fee, you can take an elevator to the top and enjoy the views. The square was the site of the major political rallies of the revolution. On the exterior of two nearby buildings, artists reimagined the paintings of two revolutionary leaders, Che Guevara and Camilo Cienfuegos, in metal. These works are several stories high and were for me, the most interesting part of this stop.

When we resumed our ride, Jorge asked me if I was a professor of English. I told him I was not, but he started calling me doctor after that. No more Princess Natasha in the back seat, it was now Doctor Natasha.

We passed by the main cemetery in Havana, with its above-ground tombs. This was one of the places I was disappointed I didn’t get to stop at. Cemeteries are great places for photographers and there are always a lot of stories to be found just by wandering among the graves. We also passed a Chinese cemetery. Chinese men were brought in as workers and intermarried. Although it has been suggested that their population was wiped out, today DNA tests show that 1.5% of the population has Chinese blood. Next, we broke off from the rest of the vehicles because Eric said the road was too rough on his car. Instead we rode through an interesting residential neighborhood before reaching a park. Although there was trash along the riverbank, the park itself was beautiful with very old trees covered in hanging vines. Along the river, there were some people and Jorge told me that they were practicing the rituals of the Santeria faith. To appease their Spanish masters, African slaves claimed to have adopted the Catholic faith. Actually they just reimaged their deities giving them names like Mary or Lazarus familiar in the Catholic teachings. The faith is still practiced in Cuba today.

After leaving the park, we drove through the “exclusive” neighborhood of Miramar. These homes were once jewels and Jorge was impressed that I picked out his two favorites to photograph. Along the boulevard, many of the homes are now foreign embassies.

Before returning to the hotel, we passed the American Embassy that sits along side the Malecon. In the lot next to it is what looks like a hundred flagpoles with no flags on them densely packed on the lot. The story is that the American Embassy had a scrolling screen that showed news from across the world, no news in particular just current events. In order to block the view of the screen from those traveling along the Malecon, the flagpoles were put up overnight. That is one way to solve a problem. 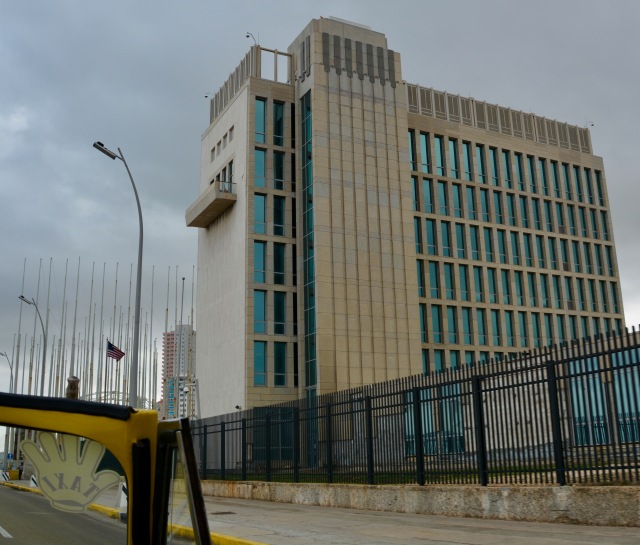 Photo ©Jean Janssen. The American Embassy in Havana Cuba from the back.  To the side you can see a portion of the densely packed flagpoles meant to block the view.

Staffing at the Embassy has been reduced indefinitely due to health attacks.  Only core personnel remain and it is defined as an “unaccompanied post”, meaning assigned staff can not bring family members with them to Cuba.  The investigation into the source of the attacks continues.  Limited staffing means long delays for Cuban nationals trying to get visas to visit the United States. 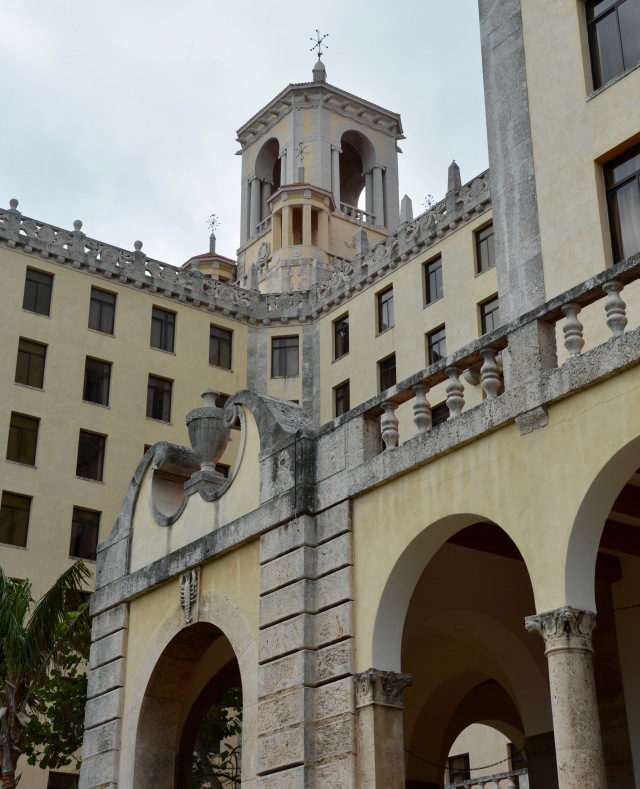 We returned to the Hotel Nacional de Cuba where we started our classic car tour. Time for a mojito! Photo ©Jean Janssen. Not all those roaming around the Hotel Nacional de Cuba are paying guests. Havana, Cuba

I am a retired attorney who loves to travel. Several years ago I began working on a Century Club membership achieved by traveling to 100 "foreign" countries. Today, at 49 years of age the count is at 82. Many were visited on land based trips. Some were cruise ports. Some were dive sites. Most have been fascinating.
View all posts by travelbynatasha →
This entry was posted in cruises, international and tagged Batista, Castro, classic American car, Cuba, Fidel Castro, Floridita, Havana, health attacks, Hotel Inglaterra, hotel Nacional de Cuba, Malecon, Sangeria, yank tank. Bookmark the permalink.