Bruges at Night and Our Final Day

Posted on December 12, 2017 by travelbynatasha

Photo ©Jean Janssen. The Provincial Court on the Market Square in Bruges.

This is our final night in Bruges after separate daytime touring.  Our host selected a nice restaurant just off the Market Square.  Walking down to the square after dark, we got to enjoy the city by night.  Wonderful lighting added to the romantic feel of the city. 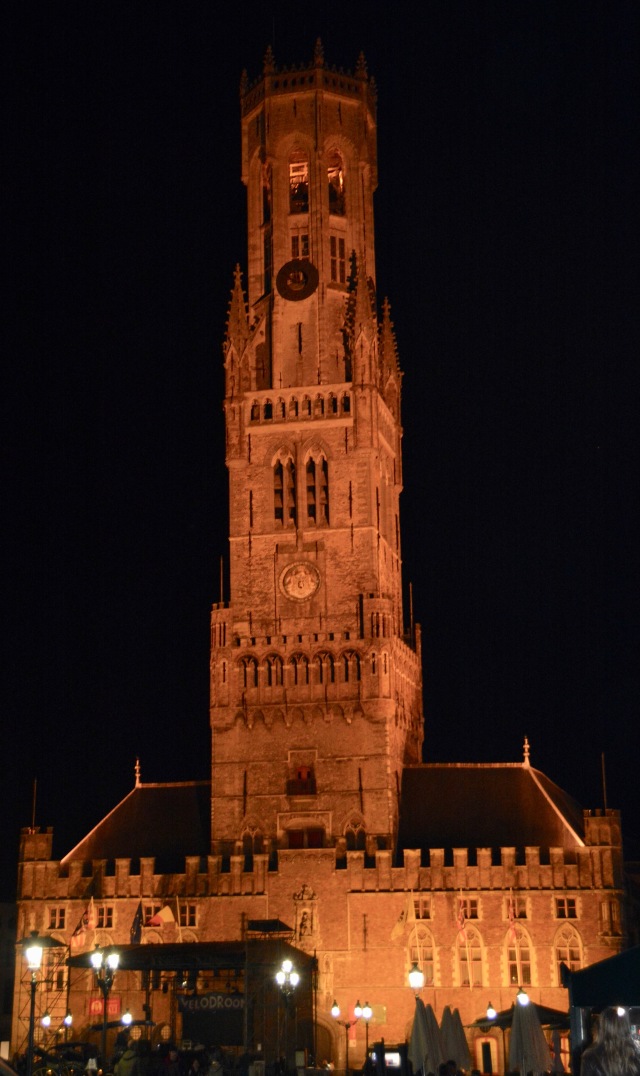 Photo by Jean Janssen. Sidewalk cafes on the Market Square in Bruges.

Photo ©Jean Janssen.  Bruges’ Provincial Court Building.  The Historium is to the left.

We enjoyed a lovely dinner.  At the table next to us was a younger couple who we struck up a conversation with near the end of our meal.  He was a European businessman and she was a Russian woman on holiday.  Boris insisted she was a prostitute.  Regardless, it was interesting getting their read on Bruges, language barriers, and international travel.

After dinner we walked over to Castle Square.  Boris had not been since the minivan tour.  We’ll return tomorrow, so he gets a final look by day.  Then we went to Rozenhoedkaai, Quay of the Rosary, to get a final night view of Bruges’ most scenic spot.

Photo ©Jean Janssen. Rozenhoedkaai, Bruges  “Here, the Groenerei and Dijver canals meet, creating a romantic, charming scene. It’s believed that the Rozenhoedkaai was a mooring place for ships back in the late Middle Ages and that salt traders would come here to unload and load their merchandise. This used to be the salt port. In the Middle Ages salt was as expensive as gold: it served to preserve food and to season dishes.” 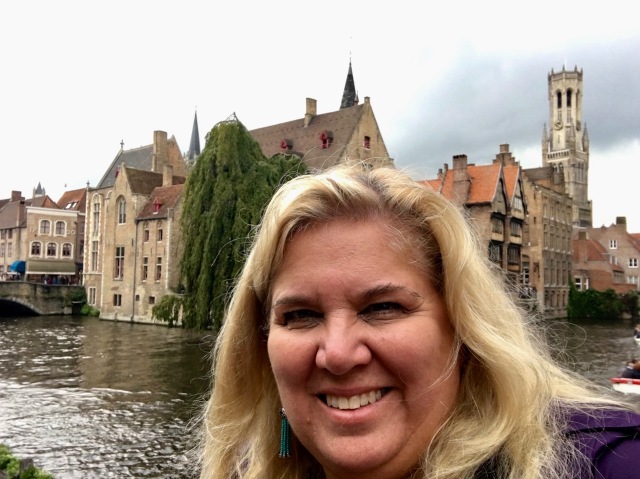 Photo ©Jean Janssen. Earlier in the day I took a selfie at the Quay of the Rosary.

After our final breakfast in Bruges, we made arrangements for a taxi pickup later in the day.  There is a festival in Bruges today so some of the routes will be closed and early arrangements were necessary.  We walked down to the Market Square to find a large stage with musical performers and a morning exercise show. 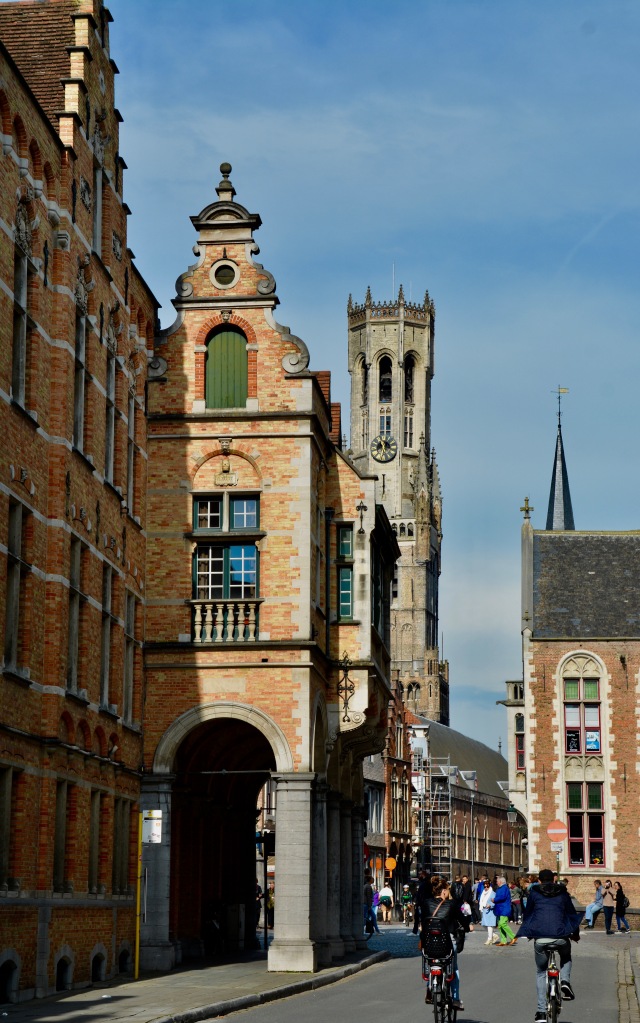 We walked part of the route I did the day before.  Rather than at a single location, we found festival events scattered throughout the city. 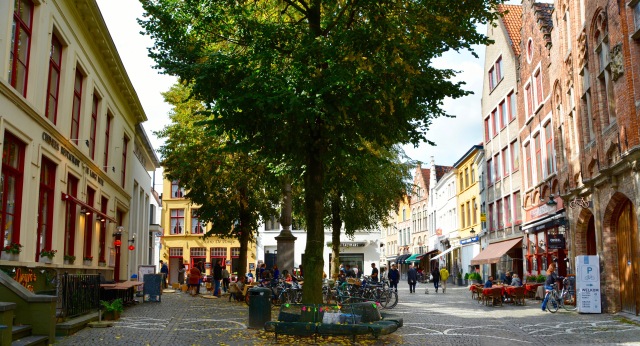 Photo ©Jean Janssen. Festival games were set up throughout the city, Bruges.

We did a little shopping including that which Belgium is known for, Chocolate.  The recommended best shop, Chocolatier Dumon, ended up being next to Chez Raymond where we had dinner last night.  At another shop we found waffles on a stick dipped in chocolate, combining two Belgium favorites.

We wandered around a bit.  We decided to walk down some of the side streets to find a spot for lunch.  The city was more crowded than usual.  To my surprise, Boris headed off down my favorite alleyway. 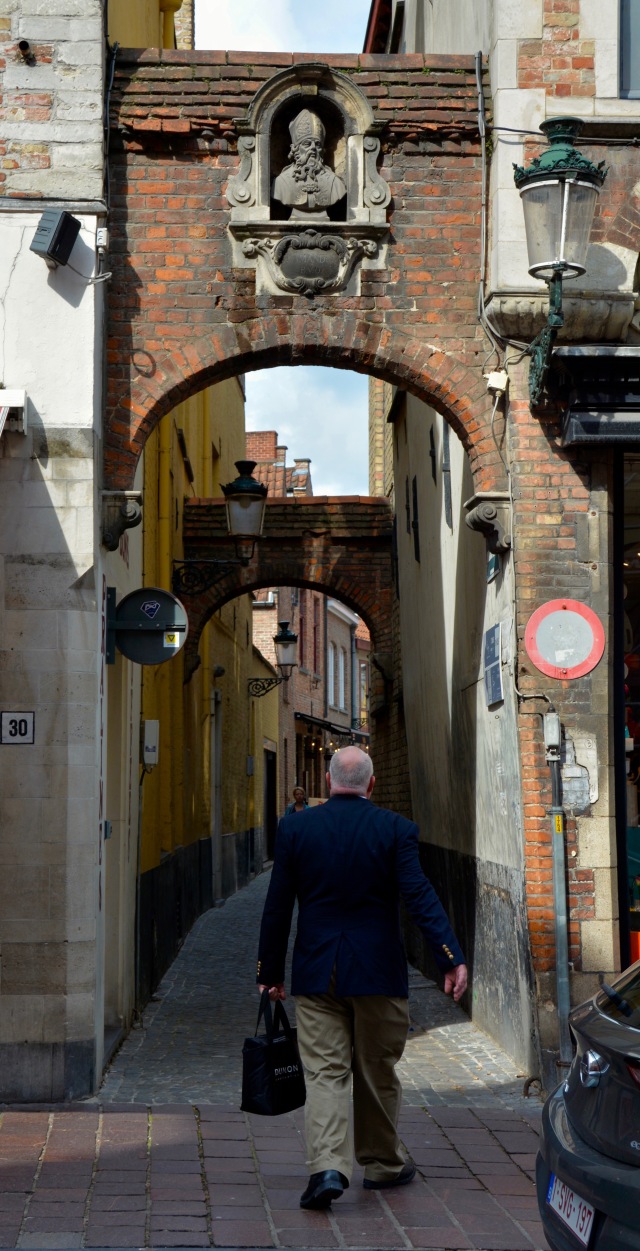 We ended up in a small square near last night’s dinner spot for our alfresco lunch.  From here we will have to head back to the hotel, grab our bags and taxi and go to the train station to reverse our travel to Brussels and eventually back to London on the Eurostar.

Photo ©Jean Janssen Lunch at the square at Eiermarkt, Bruges. We had a view of last night’s dinner spot Chez Raymond and our Chocolatier Dumon.

I found Bruges (Brugge) one of the most charming cities I have ever visited.  The citizens will tell you that part of the reason for the romanic setting is the economic hardship the city went through.  When silt filled in Bruges’ sea access and other cities became more prosperous, the city’s prospects faded.  Other cities with successful economies tore down their older buildings and modernized.  Bruges was unable to do so, so the charming medieval Flemish architecture remains for our enjoyment.  I highly recommended spending several days in Bruges.  I have more to see there and look forward to a return visit.

Photo ©Jean Janssen. The Dijver Canal, with the Church of our Lady in the background. Bruges, Belgium

I am a retired attorney who loves to travel. Several years ago I began working on a Century Club membership achieved by traveling to 100 "foreign" countries. Today, at 49 years of age the count is at 82. Many were visited on land based trips. Some were cruise ports. Some were dive sites. Most have been fascinating.
View all posts by travelbynatasha →
This entry was posted in international and tagged Bruges. Bookmark the permalink.