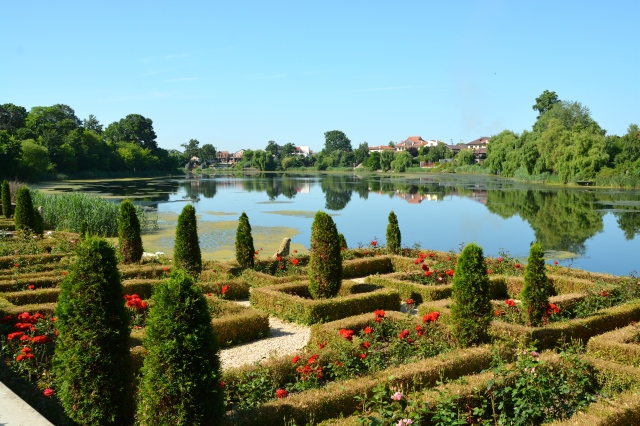 We set our bags outside the room early and then went down for an early breakfast.  We are touring the countryside near Bucharest today with stops at the Snagov Monastery and Mogosoaia Palace.

The Palace has a lovely setting on a lake about 6 miles from Bucharest.  “It was built between 1698-1702 by Constantin Brâncoveanu in what is called the Romanian Renaissance style or Brâncovenesc style.”  After murdering the family, the Ottomans took over the Palace in the early 1700s and made it an inn.  It was later returned to the family and stayed in their hands until the 19th century.  Notable were the beautiful small-tiled floors and the ornate doors.

After touring the interior of the Palace, we spent a little time at the church which sat next door and did a little walking around the Palace grounds before reboarding the coach to go to the Monastery. 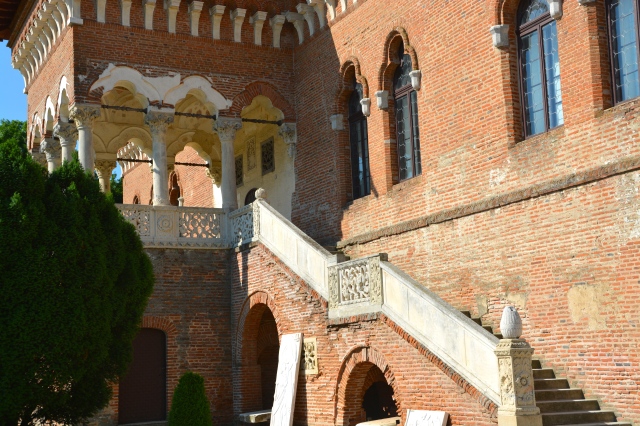 Our next stop was the Sangov Monastery, about a 45 minute drive from Bucharest.  The monastery sits on an island in a lake and is best known as the resting place of Vlad the Impaler.  Although he was killed in the forests near this island, DNA testing suggests that Vlad is not actually here.  Regardless of whether Vlad was buried here, he did have a connection to the monastery, building fortifications, a new church, bell tower, a prison and torture chamber on the island.  At one time, coins were also minted on the island. 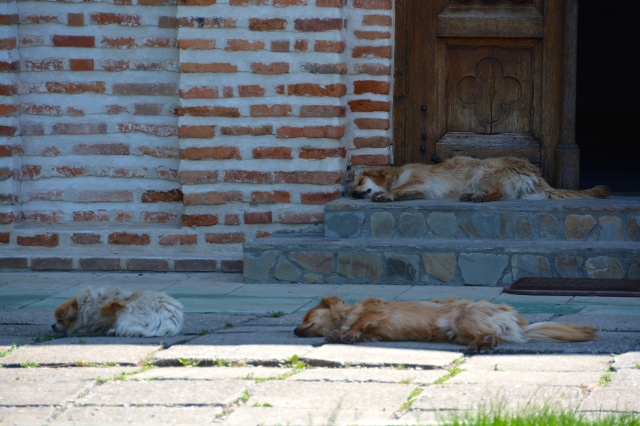 Up until 5 years ago when a bridge was built to the island, the monks shuttled visitors over in boats.  It is a peaceful setting, as evidenced by the dogs who slept in the shade near the monastery. 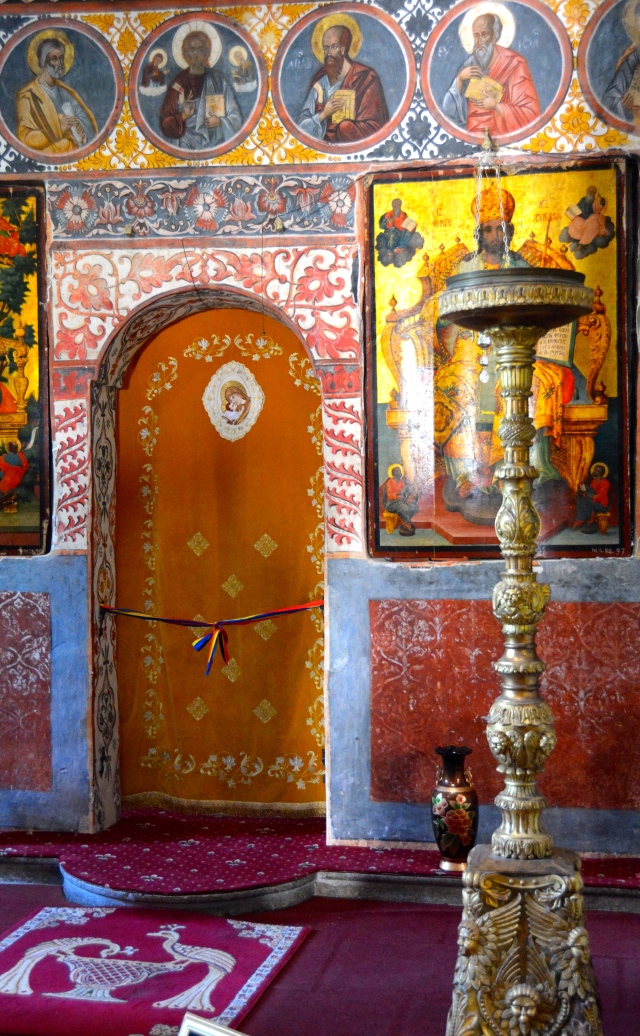 Photo ©Jean Janssen. Entrance to the altar in the Snagov Monastery Church.

Walking through the bell tower, you arrive at the church with its beautiful painted interiors and soaring ceilings.  We had some time to spend in the cool interior.  Inside the church where was also a display regarding Vlad the Impaler, including some good maps of what the country looked like at the time he ruled.  His alleged grave is also marked. 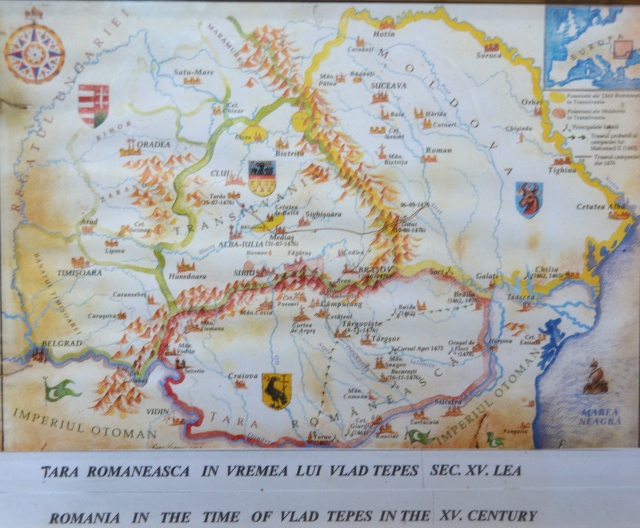 Photo ©Jean Janssen. Map showing the area at the time of Vlad’s rule. 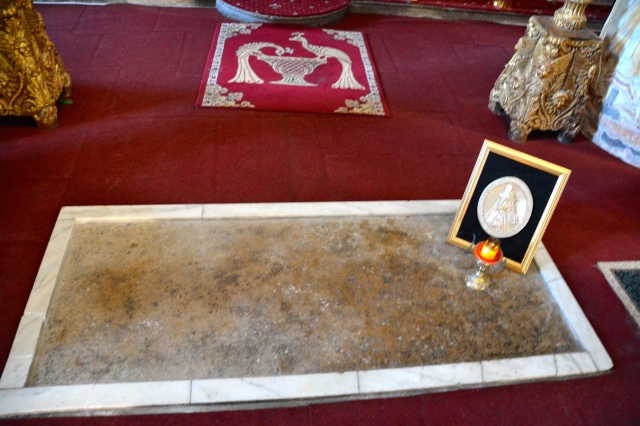 Photo ©Jean Janssen. Alleged grave of Vlad the Impaler inside the church at the Snagov Monastery.

Outside we wandered the lovely grounds, creating the friendly miniature horses that were staked on the lawn.  There is also a picturesque well behind the church and a gazebo as well.

Photo ©Jean Janssen. Miniature horses on the grounds of the Snagov Monastery. 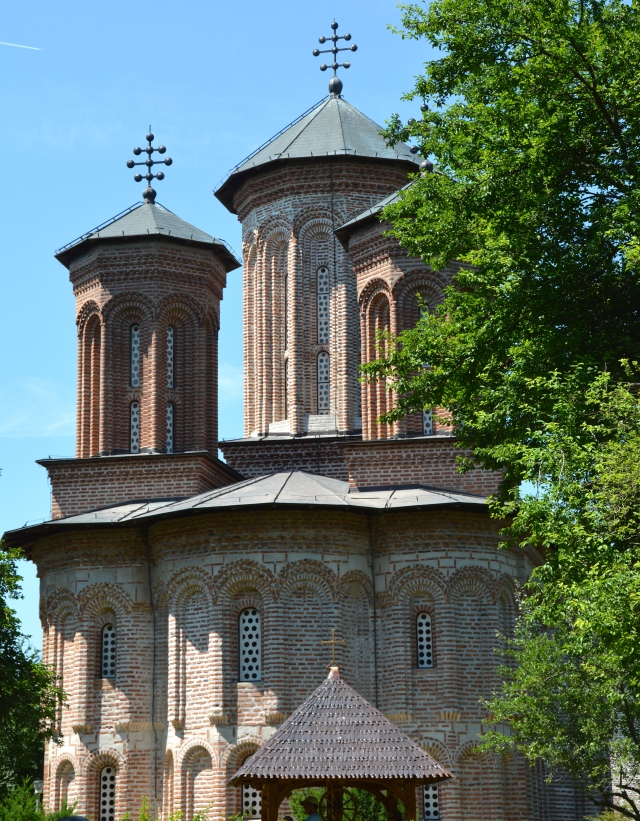 Photo ©Jean Janssen Snagov Monastery Church as seen from the back side.

After the monastery, we went back to the hotel (although we had all checked out) for a lunch break.  Since Boris and I had been there for several days we were familiar wight he area and choose an Italian restaurant on a street behind the Romanian Athenee Concert Hall to have lunch.  We saw several of the musicians coming and going with their instruments and for a while heard a performer warming up.

Also at the restaurant were other people from the ship.  We met two women from New Orleans, both retired teachers and two younger men, Mark and David, who both work in Washington DC.  I think a lot of people just ate at the hotel.

After lunch we waited at the hotel for them to call our bus.  As we rode out of the city she told us a little more.  We once again passed the embassies, noting the odd Green building that serves as the Canadian Embassy, close to the one for Russia.  We drove by many of the beautiful older homes.  75% of the properties were returned to the families after communism, but that doesn’t mean all had the means to keep them up. 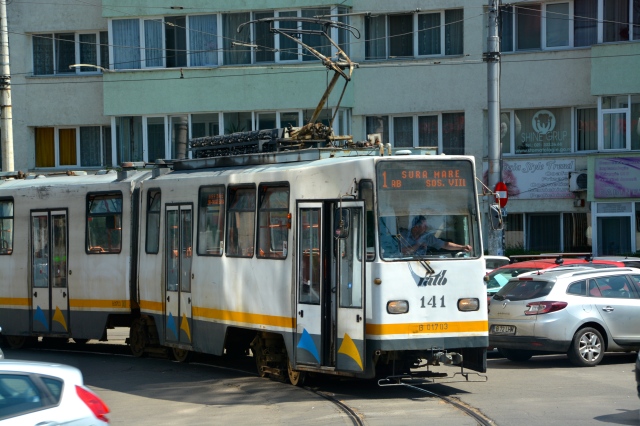 Photo ©Jean Janssen. One of many transportation options in Bucharest.

Romania has been part of the European Union for 10 years and the EU’s investment in the country is obvious in some of the wonderful renovation work that has been done.  The expenses were shared by the EU and the local governments.  Bucharest does have a modern unground METRO system.  All the lines are $1 (I might have the currency wrong) regardless of where you go.  There are also lots of car in Bucharest, in fact more cars than people.  The most common is the Dacia; this word is also the original name of the country.

We passed the Parliament building one last time.  Most of the guest told us the inside tour wasn’t worth it.  It was just lots of marble and meeting rooms and had a very cold feeling to it.  The building is the second largest in the world, behind the pentagon.  We also saw a huge Orthodox Cathedral under construction and I thought of Alex and his complaints that too much money was spent on building new churches rather than new infrastructure like new roads.

Some of the people on our ship had taken an optional tour to Ceausescu’s villa in Bucharest.  We had seen it on the Panoramic tour and it looked surprisingly modest for a villa.  The home just opened for visitors in March 2016 and those that went found it fascinating.  Their clothing has even been kept in airtight storage to preserve it.  I may have missed out on something there.  Would love to hear from anyone that has visited the villa.  Also, the hop on/hop off bus for the city comes highly recommended.

We had an hour and a half drive from the city to the River Beatrice that was at dock in Giurgiu, Romania.  When we arrived, they took our passports and we had a drink in the lounge while they checked us in.  Our bags were already in the room and we were able to unpack before we left the dock.  We have been on the Uniworld’s River Beatrice before.

Our river travel time was a whole 15 minutes.  We basically just crossed the Danube to Rousse on the Bulgarian side.  The Danube serves as a natural boarder between the two countries.  Touring Bulgaria tomorrow.

I am a retired attorney who loves to travel. Several years ago I began working on a Century Club membership achieved by traveling to 100 "foreign" countries. Today, at 49 years of age the count is at 82. Many were visited on land based trips. Some were cruise ports. Some were dive sites. Most have been fascinating.
View all posts by travelbynatasha →
This entry was posted in cruises, international, River Cruise and tagged Athenee Concert Hall, Bucharest, Ceausescu's Villa, Constantin Brancoveanu, Dacia, Miniature Horses, Mogosoaia Palace, River Beatrice, Romania, Rousee, Snagov Monastery, Uniworld, Vlad Tepes Dracula, Vlad the Impaler. Bookmark the permalink.