Photo ©Jean Janssen. Transylvania is a region of Romania. The literal translation into English is “across the forest.”

In all fairness, this post should be titled Brasov, Transylvania and a conversation with Alex, a Romanian.  As our private tour continued through the day, I really felt I had the opportunity to get to know a person more than just hear the words of a tour guide. 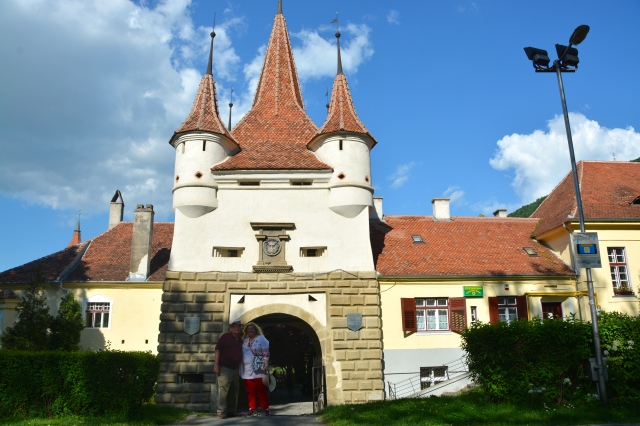 Alex took this picture of Boris and I at St. Catherine’s Gate, the only medieval city gate in Brasov that survives.  It obviously sits at a lower elevation than when it was erected.  It was maintained by the Tailors’ Guild and is on the site of and named for a Monastery which was here in former times.  The four small turrets, also seen on other Transylvanian towers, notified those that entered that the city had the “power of the sword” (judicial autonomy to decide life or death). 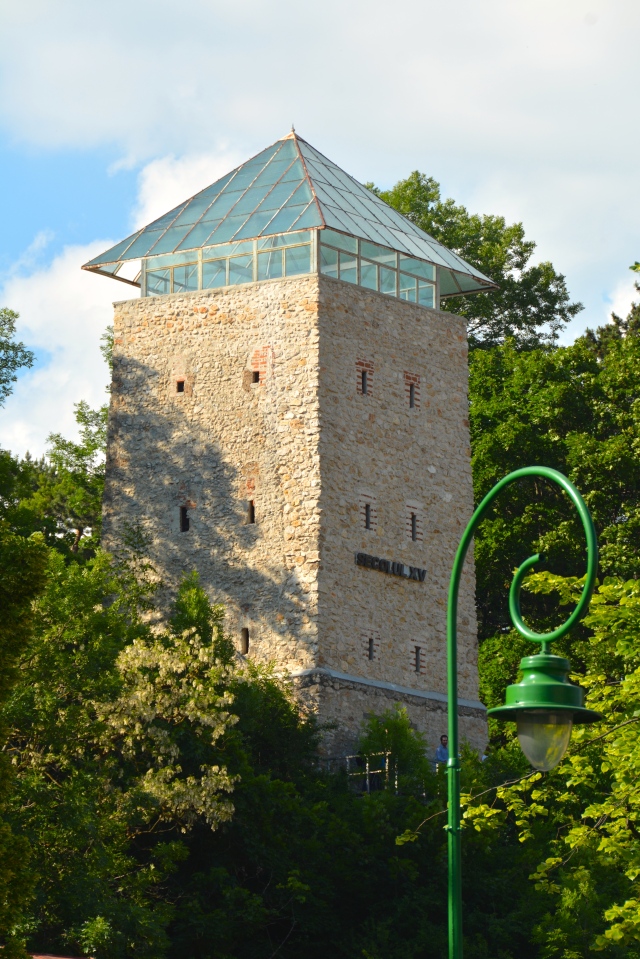 We left Bran Castle and went to the special Transylvanian city of Brasov.  Those of you reading the blog, already know that Transylvania is today a region in Romania.  We passed villages with German Saxon style homes, much different from the other neighborhoods we had seen.  These homes had a gate right at the roadway which opens into the garden and then the home within.  They are not in the least bit inviting.  All you see is gate after gate, all in a line.  The German Saxons had a great deal of influence in the development Brasov.  They were craftsmen and traders, Brasov being on the trade route from the Ottoman Empire and the West.  Brasov was at one time a walled city.  Following a medieval custom, it was the craftsmen’s guilds who maintained the towers and gate along the city walls.

Photo ©Jean Janssen. The Black Church as seen from Council Square, Brasov, Transylvania.  It is currently under renovation.  It is smaller, but modeled after the one in Cologne, Germany.

Alex once again had a parking connection.  After leaving the van, we entered the old town by the Black Church, a gothic style church completed in 1477 so named because of the color it took on from the great fire of 1689.  It is a Lutheran Church, although there is little of this German population left in the city.  We entered the Council Square, most of which is owned by the church.  The square definitely has a German feel reminiscent of town squares we have visited in Germany and Western Poland. 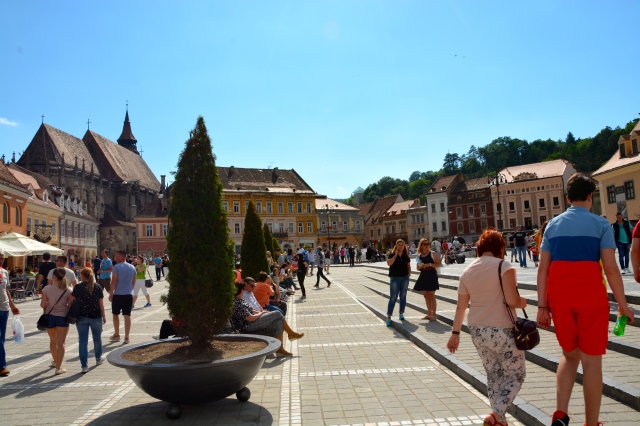 Having a late lunch as typical Romanians do, we followed Alex’s suggestion and went to local restaurant on the square.  We tried a sampler platter of many meats, potatoes, and vegetables.  We added a side of polenta with cheese and sour cream.  It was so much food, but we loved it.  The most traditional meat in Romania is pork and it is usually served with polenta.  I also tried the orange lemonade, a nice treat on a day that had grown very warm.  After lunch, Alex gave us time to stroll down the main shopping street and take photographs.

Photo ©Jean Janssen. Outside dining along the main shopping street in Brasov, Transylvania.

I learned a couple of things during my stroll.  If you are going to sell from a street cart it should be a gypsy-style wagon.  If you are going to offer sidewalk dining, you have to decorate with red geraniums.  Finally, your individual lemonade will be served in a small pitcher or carafe with a straw (actually I learned that a few days ago).

Photo ©Jean Janssen. Boris toured a World War I exhibit inside the Council building. He cut it short when he got to the World War II section that glorified the Romanian army that fought with the Nazis. The feel of this exhibit might have something to do with the people’s strong dislike of communism. In fact from 1950 to 1960, the name of the city was changed to Orasul Stalin (Stalin City).  This was not a popular choice.  Alex spoke out very strongly against communism, especially against Stalin.

Photo ©Jean Janssen. There is an Orthodox Church right on the Square, with a friendly KFC right next door. 🙂

I enjoyed taking pictures around the square.  Boris made a new friend inside a local book shop who told him about a World War I exhibition going on in the Council Building, now a museum.  I think Alex was pleased that Boris was interacting with the locals.  Alex was very flexible so he set Boris up with the tour and he and I visited on a bench in the shade meeting Buggy, a french bulldog.  Not to be outdone with local interaction by Boris, I visited with the owners and shared that my brother has 3 french bulldogs as I petted Buggy. 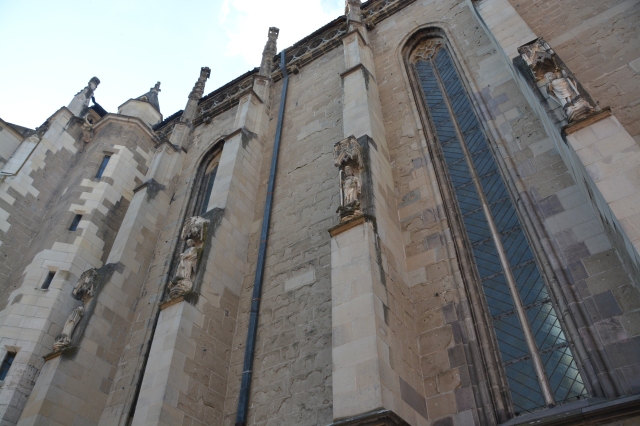 Photo ©Jean Janssen. Statuary on the facade of the Black Church, Brasov, Transylvania. 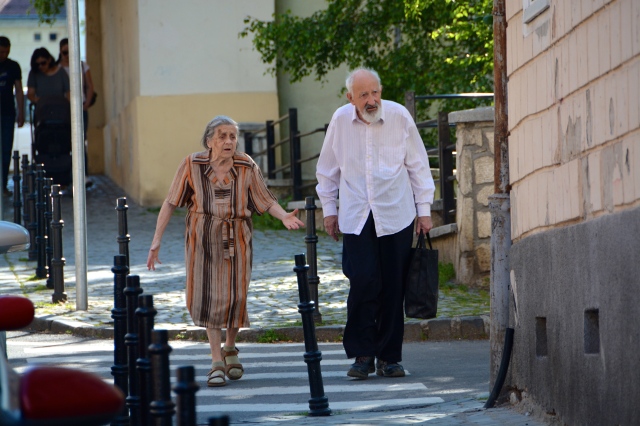 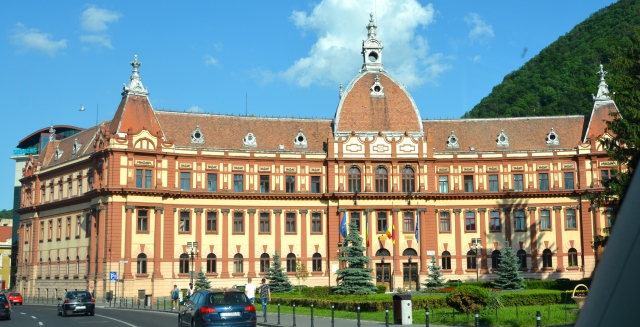 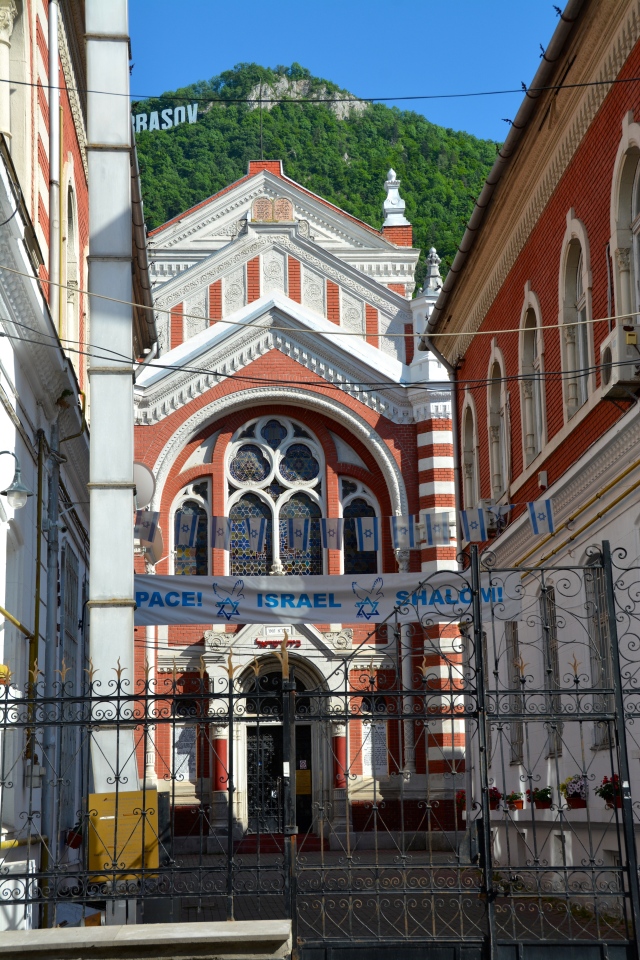 When Boris joined us, Alex gave us a brief tour around old town Brasov.  We saw the towers, Romania’s narrowest street, a Jewish synagogue, a sign depicting the home of Vlad’s favorite mistress from the area, and the law courts.  This is after all, Alex’s hometown.  Although his parents are both originally from Wallachia, they met at school and moved to Transylvania.  On our way out of the city, Alex pointed out the apartment building where he grew up and where his parents still live in a 3-bedroom apartment they now own.  Next door was the playground he enjoyed as a child.  Alex’s dad is a plumber and in exchange for some work he had done-in lieu of pay-he asked to get an apartment in a good neighborhood.  While an older soviet-style building, it was noticeably nicer that most others we had seen.  Alex told us that most of the apartments in the Soviet-era buildings have been extensively renovated inside.

As we left Brasov we had two choices, take the short way back and face certain traffic returning to Bucharest-we had seen it coming in-or take the winding mountain path that was 30 km longer.  Alex let me choose and I went with forest.  It turned out to be an excellent choice.  Yes, it was a 4 hour return trip, but we made it at least 2 hours faster than other tour groups in his company who took the original route home.

Alex and I talked the whole time back to Bucharest, with Boris fading in and out.  I learned more about his country, but we also ventured into taboo topics like politics and religion.  I wonder if he knew I was a skilled litigator.  I am not sure I even know when I am “taking someone’s deposition”.  One tidbit I will share, according to Alex “the national sport in Romania is corruption”.

Photo ©Jean Janssen. Want to know how winding the road was? Not the clearest picture, but Alex’s APP tells the tale.

The countryside was extraordinarily beautiful.  Horses roamed free-although I saw this in villages too-and shepherds tended sheep (or were sometimes sleeping on the job).  The road did wind, but fortunately Alex was driving and I got to take it all in.  We are traveling in the Carpathian Mountains, on a cool, forested, winding path.

We did drive though an area with a gypsy settlement with very small houses-you don’t need as much if you are nomadic.  The houses have no electricity (unless bootlegged) and no running water. 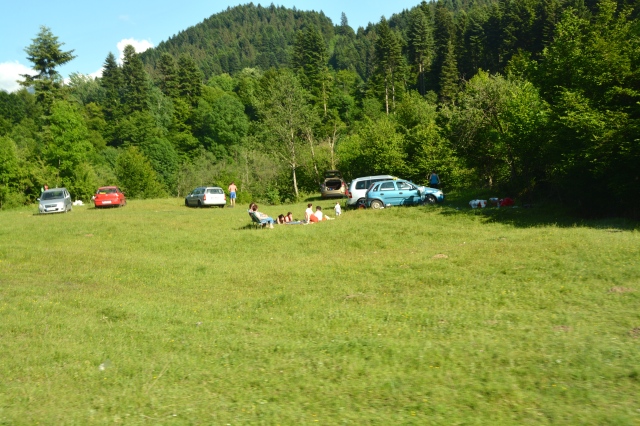 Photo ©Jean Janssen. Romanians just created these impromptu parks in the fields by the side of the road. I saw these all over on the drive back to Bucharest.

Frequently on the road, we passed by fields where people had just pulled over and parked on the meadow.  Some were just enjoying the sun, others had meals and fires going.

As we neared Bucharest, we once again passed the refineries.  The world’s first were in Romania, established three years before the one in Titusville, Pennsylvania.  In another first, Romanian Henri Coanda invented the jet engine; he also holds several patents. 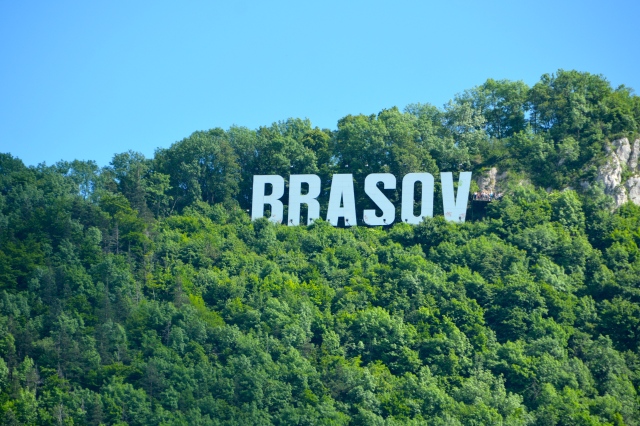 But the Romanian with whom I am most impressed is my new friend Alexandru Stan.  Alex worked on a river cruise line, starting at age 19.  He did that for seven years, working himself up to the 3-bar position of purser.  No small feat, and a position of extreme importance and responsibility.  He was born during the communist regime to parents whose whole lifetime to that point had been dictated by that political party’s whims.  His grandparents had fought in the world wars and seen their land and possessions striped from them.  He was a child in the 90s just after the communist government fell when his country was in transition and a very unsafe place.  He has survived to be a special young man willing to spend the day sharing his country and a bit of his personal story with a visitor.

Photo ©Jean Janssen. What the cool kids are wearing in Transylvania these days. As seen window shopping in Brasov.

You won’t find a better guide than Alex.  If you want to really experience Romania, Alex recommends a 10-day full country tour.  He is an independent contractor now, doing most of his work with Unzip Romania, who has outstanding ratings on Trip Advisor.  I met their organizer Diana and several of their other guides, all of whom are knowledgeable and friendly.  Alex is also the Romanian representative for a River Cruise line (although not Uniworld which is who we are traveling with).

We had a long drive back, but I thoroughly enjoyed my day.  It was beautiful and enlightening.  I didn’t find any vampires, but I have another chance when I visit the Parliament Building in a few days. 🙂

I am a retired attorney who loves to travel. Several years ago I began working on a Century Club membership achieved by traveling to 100 "foreign" countries. Today, at 49 years of age the count is at 82. Many were visited on land based trips. Some were cruise ports. Some were dive sites. Most have been fascinating.
View all posts by travelbynatasha →
This entry was posted in cruises, international, River Cruise and tagged Alexandru Stan, Black Church, Brasov, Carpathian Mountains, Henri Coanda, Romania, St. Catherine's Gate, Titusville Pennsylvania, Transylvania, Unzip Romania, Vlad Tepes Dracula, Vlad the Impaler. Bookmark the permalink.