A Caribbean Cruise aboard the Disney Fantasy

Posted on March 6, 2017 by travelbynatasha

Natasha with the honorary ship’s captain of the Disney Fantasy in the atrium lobby.

Rocky and I are taking a cruise to the Caribbean aboard the Disney Fantasy, one of Disney’s two newer cruise ships.  Our first Disney cruise was out of Galveston aboard the Wonder, one of the older two ships.  This time we are flying to Orlando and taking the ship’s transfer to Cape Canaveral.  I avoided Disney cruises for many years because they are priced higher than other cruises at this amenity level.  However, once you take one (and if you love Disney as much as I do) you understand the price difference in the level of entertainment that the experience affords.

Dumbo makes his appearance on the rear of the Disney Fantasy. ©Jean Janssen

Admittedly most of the cruisers have small children, especially during a school week.  However, there are also families with home-schooled children and parents who have taken their children out of school to go to DisneyWorld and its on-water extension.  You will also find plenty of retired couples, young married (or dating) couples (including honeymooners), and a few mothers and sons looking for another type of Disney experience beyond the parks. Rey’s speeder from Episode 7: The Force Awakens is in the lobby of the Disney Fantasy. ©Jean Janssen

Another plus of this cruise, available only on the Disney Fantasy January-April, is that it has a Star Wars Theme.  That guarantees you one full day of Star Wars activities with a few teasers along the way.  It also means you will travel with other Star Wars enthusiasts.  You have all now figured out how I got Rocky to go on this cruise with me. 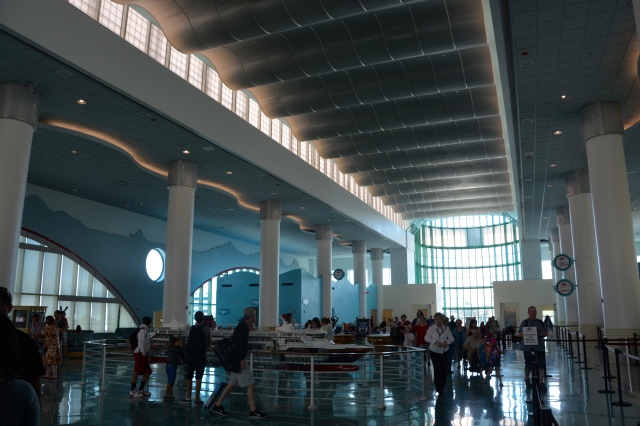 We took an early Saturday morning flight into Orlando and headed to the Magical Express Transfer desk on level one on the B side of the main concourse (same place you go for the free transfer to the park).  There was a long line that was not moving waiting to load the buses.  We found out that there was fog at the port and that the entry of the ship into dock was delayed by three hours.  Glad I wasn’t flying out that day; I would have missed my flight.  Although it was not their fault, a Disney representative went up to each family directly and explained the situation.  They also sent an email. 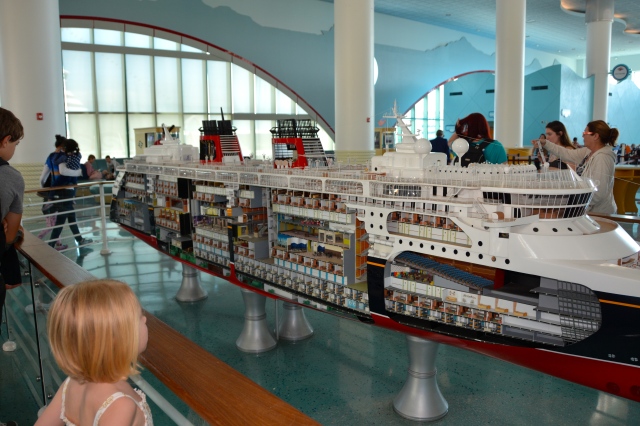 Model of the Disney Magic, one of the original Disney cruise ships, in the Cape Canaveral Disney Cruise Terminal Building. ©Jean Janssen

Once the line starting moving, they loaded people slowly as not to flood the port terminal with arrivals.  The drive to the port would normally take 45 minutes.  This day it took two hours, most of the time within sight of the terminal building.  The delay was due to heavy traffic and the periodic raising of the drawbridge.  Three cruise lines depart out of Cape Canaveral-Disney, Norwegian, and Carnival.  Once inside, things moved very quickly in this very attractive building.

Rocky at the ship entrance in the Disney Cruise Terminal in Cape Canaveral, Florida.      ©Jean Janssen

Rocky and I booked this cruise late, hoping to catch a deal.  There were only two rooms left at the time.  Of course the ship was sold out when we boarded.  We usually book balcony rooms, but we have ocean view this time with a porthole window.  The window has a cushion so you can sit there and read.  Yes, Natasha tried it.  No, it was definitely designed for a child.  We dropped our carry-on bags at the room and headed to the buffet and to explore the ship a little.

You don’t want to go too fast on the AquaDuck or you may fly out of one of the openings in the tube and straight into one of the main stacks on the ship like Donald did aboard the Disney Fantasy. ©Jean Janssen

One of the unique attractions on this ship is the AquaDuck.  There is also a waterside, but the AquaDuck is a water flume ride in and outside of plastic tubing that goes out over the water and through one of the main stacks of the ship.  You ride in double-seated tubes.  It is on our bucket list for the cruise.

Tonight we met our dining partners in one of the three main dining rooms.  Ship guests rotate between three main dining rooms each with a different theme and entertainment.  Your servers go with you and you are seating with the same group each time.  We were seated with two young married couples, one on their delayed honeymoon.  They are all more closer in age to Rocky than to me.  The guys are all big Star Wars fans and those details dominated tonight’s conversation.

We usually take first seating, but it was not available and is also much earlier on the Disney ship (before 6).  First seating is the one with most of the small children and it is not a slow leisurely meal.  It is rushed through for the sake of the children.  We were first seating on our first Disney cruise.  When traveling on a Disney cruise, I highly recommend the second seating for parties with all adults or adults and older children.  We started our rotation in the Royal Court, the most ornate dining room just off the atrium lobby.  Here the waiters dress like Prince Charming.  My favorite detail however was the bread basket that looked like a coach.  Our second seating dinner was at a much more relaxed pace.

Minnie Mouse greeting fans on the 4th four balcony into the atrium on the Disney Fantasy. ©Jean Janssen

The Disney characters are out in full force this evening in the atrium.  They are available for photographs all week and their appearance schedule is in the daily program.  Parents also bring along autograph books and blank frames for the characters to sign.  You will have far more opportunities for pictures and shorter lines on the cruise ships than you do at the parks if this experience is anything like ours was on the Wonder.  On that first trip, I met a parent who told me that is why they came on the cruise.  They wanted to give their younger child a Disney experience, but felt safer in this environment than in one of the parks.  Greeting characters was a big plus for them.  They planned on taking their children to the parks when they were older. 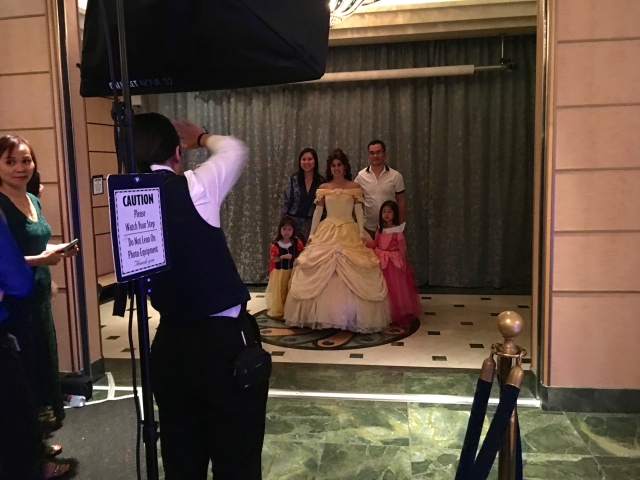 Ship guests dressed up to see Belle aboard the Disney Fantasy. ©Jean Janssen

In spite of the weather delay, the ship was turned around quickly and we left the port on time.  We had the benefit of putting pre-printed tags on our luggage in Houston and not worrying about it again until it appeared at our cabin.  Disney pulled the luggage when it came off the plane in Orlando (MCO) and delivered it to the port and then to our stateroom.  I was just a little nervous about it, but it arrived prior to the ship pulling away from the pier.  After, the welcome show, dinner, and getting up really early for our departure, we were tired and in bed before 11.  We had planned to go see the late showing of Episode 4:  A New Hope, the original Star Wars Movie from 1977, but just couldn’t keep our eyes open. With two sea days ahead of us, we look forward to relaxing on the high seas and catching most of the Star Wars movies which will be shown throughout the week. 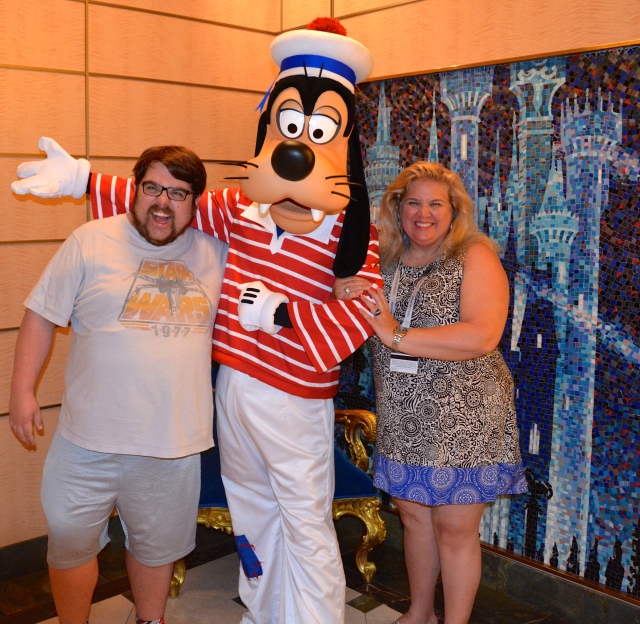 Rocky, Goofy, and Natasha aboard the Disney Fantasy.

I am a retired attorney who loves to travel. Several years ago I began working on a Century Club membership achieved by traveling to 100 "foreign" countries. Today, at 49 years of age the count is at 82. Many were visited on land based trips. Some were cruise ports. Some were dive sites. Most have been fascinating.
View all posts by travelbynatasha →
This entry was posted in cruises, Disney, international and tagged AquaDuck, Cape Canaveral, Disney cruise, Disney Fantasy, Star Wars, Star Wars Day at Sea. Bookmark the permalink.

2 Responses to A Caribbean Cruise aboard the Disney Fantasy