Posted on February 9, 2016 by travelbynatasha 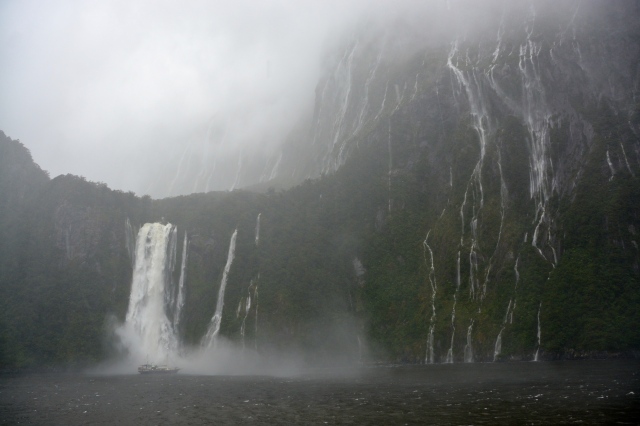 For the last two days we have crossed the Tasman Sea. We are once again on the boat today, but land is in sight as be traverse the fjords on the southwestern side of New Zealand. Warned of the Tasman’s Sea reputation for rough waters, Guest Relations handed out seasick pills and there were bags along the railings in the hallways and staircases. Boris and I took the pills and did just fine on the crossing.

We were scheduled to arrive at the entrance to Milford Sound at 6:30 am, so I asked Boris to wake me up by that time. He is a very early riser. I woke up when I felt the boat slowing and asked if he knew what time it was. Boris said it was just after 5 am, but I took a peek anyway. My view was breathtaking, a series of waterfalls in the gray mist. We were wrong about the time. It was after 7 am and we were already almost at the far end of the sound where we were meeting the tender for those taking a two-day land excursion to Queenstown; it was also our turnaround point.

In the sun, the green peaks are reputed to be beautiful. In the early morning rain, it was magical. The Sound is one of the wettest places on the planet with an average of 23 feet (7m) of rain a year. Between the melting snow and the rain, hundreds (yes, hundreds) of waterfalls are created. The pictures I had seen were taken in sunlight showing full color. My photographs, shot in the limited morning light with the rain falling, look like they were taken with black and white film. They are not. 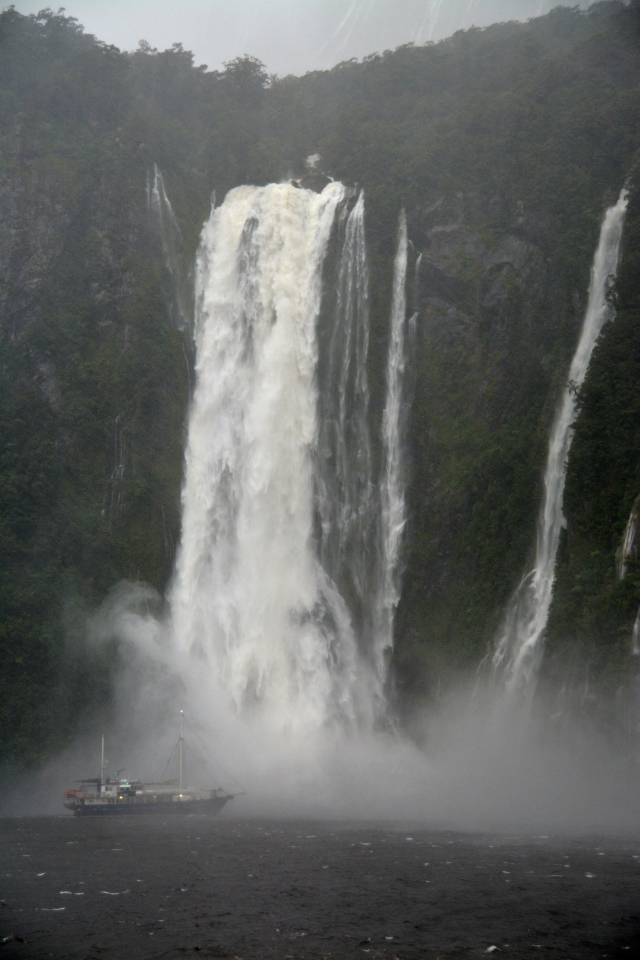 ©Jean Janssen   The largest waterfall in Milford Sound. For scale, note the ship near the bottom of the fall.

Milford South is not technically a sound, which is a wide inlet from the sea.  It is actually a fjord, a deep narrow inlet surrounded by tall peaks. It is part of Fjordland National Park and a world heritage site carved out during the last ice age.   Because of all the rain and cascading fresh water into the sound, 10m of fresh water sits on top of the sea water found in the sound which makes for some interesting aquatic life.   In addition to the many unique New Zealand birds found here, seals, dolphins, and penguins are among the animal life found in Milford Sound.

Boris and I sat on our balcony and just stared. When the rain started coming onto the balcony, we retreated inside leaving the door open until the boat changed direction and it was safe to sit outside again. Milford Sound is a place of unbelievable beauty that everyone should see during his or her lifetime. It is like a dream.

©Jean Janssen Dolphins in the Fjords of Southwestern New Zealand

When we were once again at sea, Boris and I went to breakfast and the boat picked up speed, a lot of speed. The captain announced that given how well we had maneuvered through Milford Sound, the pilot had suggested we pass through some other fjords, so we were going to go fast to create additional time for the bonus scenery. After a nap-I am on vacation-we had lunch by the tall windows in the dining room and in the afternoon sat on the balcony enjoying the view as we passed through the fjords of southwest New Zealand. In one fjord I was rewarded with a school of dolphins. Welcome to New Zealand, Natasha.

I am a retired attorney who loves to travel. Several years ago I began working on a Century Club membership achieved by traveling to 100 "foreign" countries. Today, at 49 years of age the count is at 82. Many were visited on land based trips. Some were cruise ports. Some were dive sites. Most have been fascinating.
View all posts by travelbynatasha →
This entry was posted in Uncategorized. Bookmark the permalink.