Posted on August 24, 2015 by travelbynatasha

Although the city is famous for its Romanesque Cathedral, I was partial to the painted paneling in Trinity Lutheran Church in Speyer, Germany
©Jean Janssen

Today we are docked at Germiersheim, about a 20 minute shuttle ride into Speyer (and the famous Romanesque Cathedral).  This afternoon we are going to Heidelberg, a “bucket list” German city for Boris and I.  The ship offered three options for morning touring.  You could take a shuttle into town and stay as long as you wanted; the last shuttle returned in the early evening.  Alternatively, you could take the bus in for a walking tour of Speyer.  Your third option was to go to a vinegar tasting and cooking demonstration at Doktorenhof Vinegar Estate.  All these were complimentary offerings.  Boris and I are going to take the Speyer walking tour.

Our view as we arrived in Speyer, the spires of the Romanesque Cathedral, Speyer, Germany.
©Jean Janssen

Those going to the vinegar tasting could also sign up for a vinegar cooking class in the afternoon.   The Heidelburg tour is another afternoon option.  For these last two there was a fee, although much less than excursions of the same length on other cruise lines.  I suspect they are just recouping costs rather than making a lot of money on these optional tours.  They are enticements to take the cruise.  Certainly Boris and I were excited when we saw Heidelberg on the itinerary when we were looking at cruise options.

Arriving into Speyer, we saw the technical museum, Technik Museum Speyer.  From our shuttle drop off point, you could walk over.  The 747 mounted on top of the museum, one of many planes at the museum (there was also lots of older military aircraft), was originally mounted higher but there were objections since it made the museum taller than the Cathedral.  The plane was lowered. You walk up to tour the airplane; going down you can slide or walk.  (In summertime, wear something long enough to cover your legs if you intend to slide or you might burn your bottom.)

On the eastern facade of the Imperial Cathedral Speyer, Germany
©Jean Janssen

Our first stop was to tour the exterior of the Cathedral.  The Basilica was built as a mausoleum in 1030 by Conrad II and was consecrated in 1061.  The second building phase lasted from 1081-1106 when the four towers and two octagonal domes were added.  It is the largest Romanesque building in the world.  It was the burial place for German Emperors for 300 years; 11 crown heads are buried here.

As we toured the eastern cascade of the Cathedral, you could see wonderful carvings that looked almost primitive.  Turning away from the basilica, portions of the medieval walls were present.  The Heidenturmchen, or Heath Tower, used to sit next to the Rhine in a marshy area called the heath.  Our guide only mentioned them in passing and didn’t take us by them, but Boris wandered over to take a look. 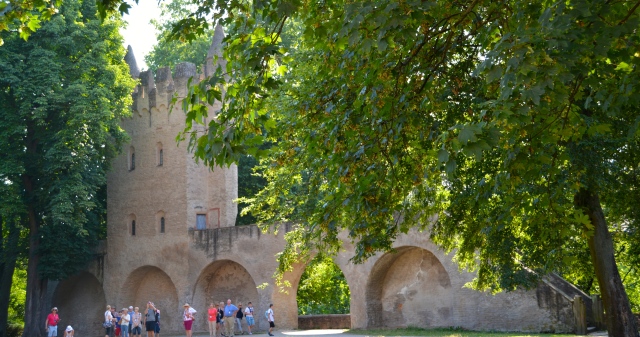 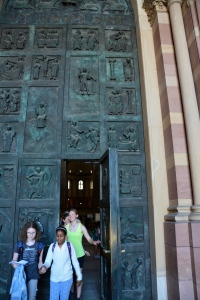 The Cathedral was seriously damaged by fire in 1689 and additional portions that had become unstable were removed in 1755.  Between 1772 and 1778 portions were rebuilt as an exact copy of the original design and are  “regarded as one of the first great achievements of monument preservation in Europe.”  Later reconstruction were less exact and more an interpretation of medieval architecture.  The Cathedral is a UNESCO World Heritage Site.

The western facade was obviously made of newer stone and was rebuilt in 1855.  In front of the Cathedral sits a large bowl, the Domnapf (or Cathedral Bowl) erected as a boundary between the religious and secular areas of the city and also used for the payment of taxes in wine.  (This is a famous region for vineyards.)  After a change in the tax laws, each new arriving Bishop was required to fill the bowl with wine for the pleasure of town leadership. 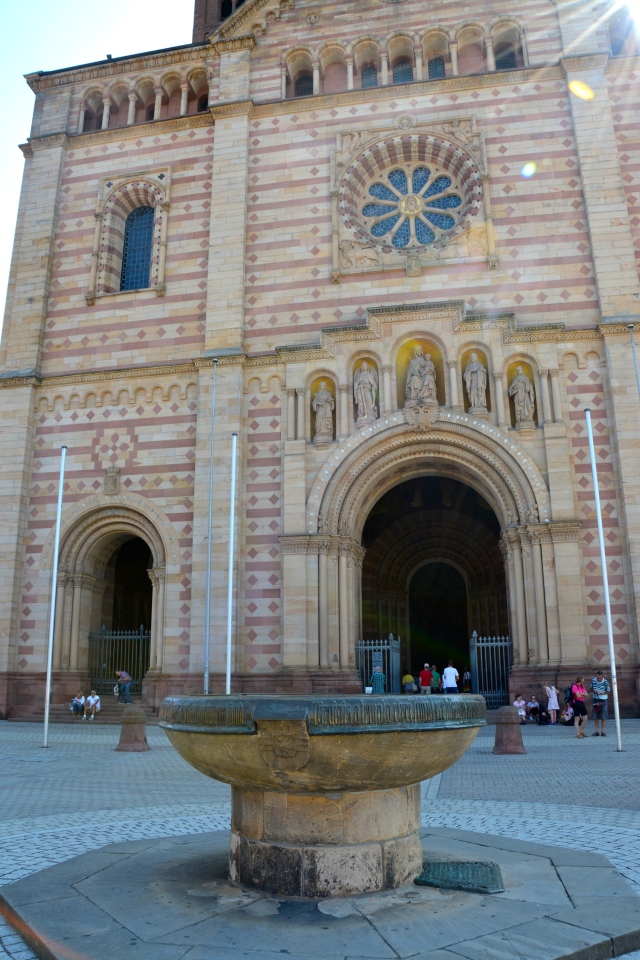 The western facade of the Imperial Cathedral at Speyer with the domnapf in the plaza.
©Jean Janssen

The tour then moved into the city to visit the Jewish heritage site.  Boris was very disappointed that the tour did not include the interior of the Cathedral.  (He was not too impressed with our tour guide, a former military officer.)  We were promised free time at the end of the tour and hope to have the opportunity to visit then.

The entrance to the Mikvah, Jewish ritual bath, at Speyer, Germany
©Jean Janssen

Recognizing the tax proceeds to be collected from prosperous Jews, Christians in the city built a synagogue to encourage Jewish settlement.  They built a wall around the quarter for “protection” and then charged more taxes for this protection.  Included in the remains were the outlines of synagogue and a second prayer room for the women.  Our guide pointed out the openings in the wall where the sound would pass through to the women. 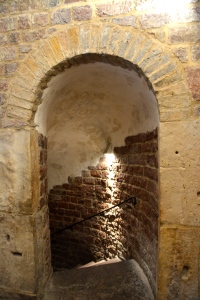 Stairs leading into the immersion pool in the medieval Mikvah at Speyer, Germany.
©Jean Janssen

Best preserved is the ritual bath, or Mikvah, built in 1128.  After a time of impurity, one would have to clean the body and obtain ritual purity before entering the Temple.  Examples of times of impurities would include after menstruation or childbirth and before resuming marital relations for a woman, illness, or touching a dead body.  The Mikvah is commonly used during the process of conversion to Judaism.  Some family friends who are Jewish and adopted children made use of a Mikvah as part of their children’s conversion.

The believer enters the water naked and goes completely under multiple times. The water in the Mikvah comes from a spring, rain, or natural ground water.

After leaving the Jewish quarter, we walked past the town hall to visit a Protestant church built in the early 18th century.  The French had burnt all Protestant churches in Speyer in 1689.  Trinity Lutheran Church was build by the town council (controlled by the Protestants) between 1701 and 1717.  It was considered a public building and as such had to have a a picture of the municipal symbol which is the Catholic Imperial Cathedral.

We were very fortunate to have the opportunity to visit the church.  It is kept locked and we were locked in and out by our guide.  The church will be closed for two years for renovation and restoration of the painted wooden panels beginning four days after our visit.  Trinity Lutheran has several design differences from other churches of its kind.  First, as mentioned above, there is a picture (municipal symbol) of a Catholic church inside a Lutheran one.  Second, the church has a crucifix, rather than a cross, which is commonly found only in a Catholic Church.  Third, depicting the importance of the music, the organ is positioned above the altar (highly unusual). 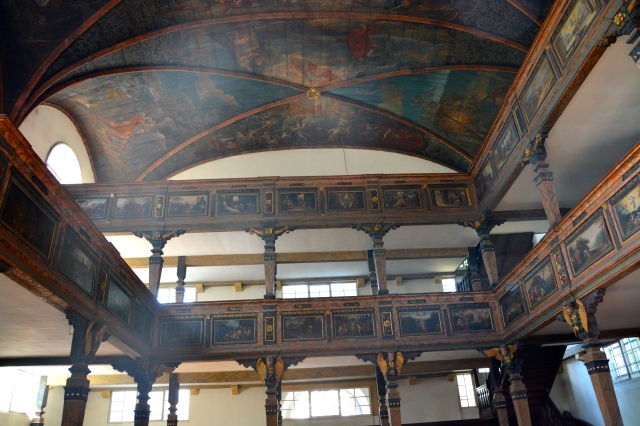 Facing away from the altar and towards the rear in Trinity Lutheran Church in Speyer, Germany showing the beautifully painted wood paneling of the double canopies (balconies).
©Jean Janssen 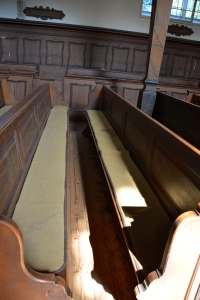 Additionally, rows 1-5 are “double-seated”.  There are benches facing in toward each other.  The pulpit is midway through the church.  Normally the persons in rows 1-5 face the altar.  During the time the minister is at the pulpit, the people switch benches and face the pulpit.

The church also features double canopies for the congregates.  Trinity Lutheran is a working church, but the canopies or balconies are only used during Easter and Christmas Eve when the church is exceptionally full.

I found the church to be absolutely beautiful and reminiscent of the wonderful wooden Protestant churches we visited in Poland.  I look forward to a return visit when the painting restoration is complete.

The day had grown incredibly hot.  The tour ended at Trinity Lutheran, our only inside venue (except the interior of the Mikvah).  I really wanted to see the interior of the Cathedral, but the ticket office was not yet open when we had been by before.  Boris was less thrilled with that idea.  We did wander around a bit.  The sidewalk cafes with umbrellas were busy and inviting; there were more churches to see, but the sun had rather wiped us out.  Since we knew we had some climbing to do in Heidelberg, we decided to take it easy in the shade by the Cathedral (although you know I was still snapping pictures). 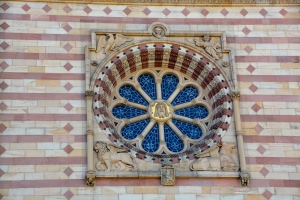 You certainly could have found more things to do in Speyer, but we took the shuttle back to the ship for lunch and to be ready for our afternoon excursion to Heidelberg.  Actually, it also gives me an excuse to come back.

I am a retired attorney who loves to travel. Several years ago I began working on a Century Club membership achieved by traveling to 100 "foreign" countries. Today, at 49 years of age the count is at 82. Many were visited on land based trips. Some were cruise ports. Some were dive sites. Most have been fascinating.
View all posts by travelbynatasha →
This entry was posted in international, River Cruise and tagged cathedral bowl, Domnapf, Germany, Heath Tower, Heidenturmchin, Imperial Cathedral, mikvah, Romanesque, Speyer, Technik Museum Speyer, Trinity Lutheran Church. Bookmark the permalink.