Posted on December 9, 2014 by travelbynatasha 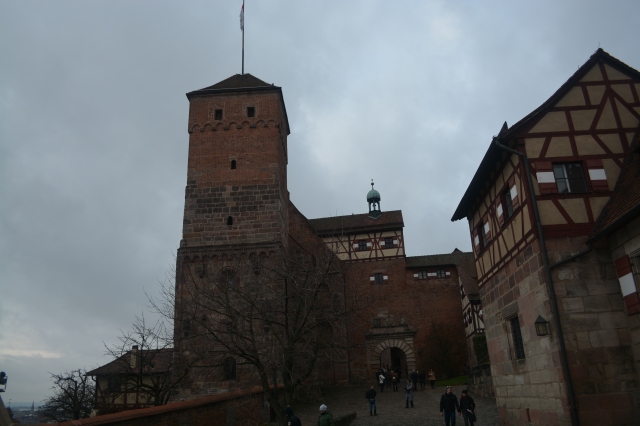 Nuremberg in 1945 after bombing

There is a full day of touring today in Nuremberg.  (Here is my shout out to my dive buddy who was born in this city.) This morning we are headed to the castle and then to the Christmas market.  This afternoon is the WWII tour to the Nazi Rally Grounds and Courtroom 600, site of the Nazi War Crimes Trials. Nuremberg (sign posted Nurnberg, with the two dots above the “u” in German) sustained severe bombing during the Second World War with 91% of the buildings damaged.  The citizens decided to rebuild the medieval buildings within the 3 miles of city walls, which at 16 feet thick survived the bombing.  In fact the city walls and large round watch towers were air raid shelters during the war.  Nuremberg has long been an industrial city and with its military production facilities made it a prime target during the war. 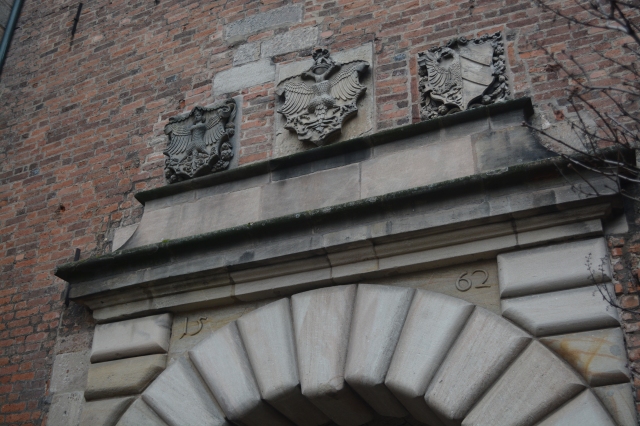 Nuremberg first appears in an historic record in 1050.  A knight, a nobleman, fell in love with a servant girl who he was unable to marry as she did not have free status as a citizen.  He made a request to the king for her to receive the appropriate status and the resulting document resulted in the first recorded mention of Nuremberg.  Citizens are proud that there history begins with a love story.

Skyline of Nuremberg from the castle. Note the industrial smokestacks, communications tower, and the church spires-symbols of the city past and present
©Jean Janssen

Nuremberg was one of Germany largest cities in the 15 and 16th century as a major player in trade with Asia.  Unfortunately, trade could not be maintained during the Thirty Years War between Catholics and Protestants and the economy was in ruins.  With trade shifting to cities with a water route, the city really didn’t regain its importance until industrialization in the 19th century.  The first German train travel was the seven mile stretch between Nuremberg and Furth.  Nuremberg’s manufacturing emphasis remains today with Siemens (engineering technology) and MAN (transportation units-originally rail cars, now trucks) with major production sites in the region.  Today, Nuremberg is the second largest city in the state of Bavaria, after Munich, and the largest city in Franconia. 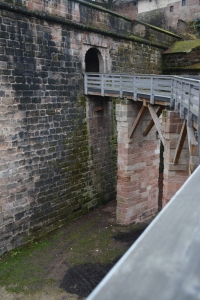 Entrance to Nuremberg Castle, above the deep moat.
©Jean Janssen

Our walking tour began with a short walk up to the castle where we saw first hand how difficult it would be to breach.  First there was the deep moat, the the curve entrance which often made it difficult to make the turn with the battering ram, and finally the hallway with overhead openings where hot oil could be dropped in.  Fortunately, there were no such obstacles today.  The castle perch gave us lovely views of the city and all the red roof tops.

After our exterior visit, we walked down to the main square and the Christmas market.  The square includes a wonderful gated fountain.  The ironwork around it was later added to get people from allowing their animals to drink from the clear water.  A water spout allowed access via bucket.  There is also a large brass ring on the dark ironwork. 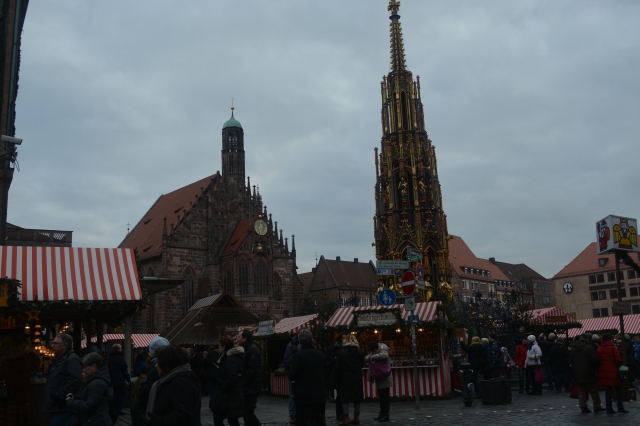 Legend has it that the ironwork blacksmith had a daughter that his apprentice wanted to wed.  The blacksmith preferred that his daughter marry a master craftsman and forbid the marriage.  Whereupon, the distraught suitor placed the brass ring on the fountain ironwork and left to live out the rest of his days in the forest.  The blacksmith upon seeing the work and being unable to find the seam, was so impressed that he changed his mind and permitted the marriage.  Unfortunately, the young man had fled into the forest.  The daughter came the next morning and turned the ring clockwise three times and wished that she might see him again and the apprentice reappeared.  It is said that if you turn the ring three times and make your wish, you will get your heart’s desire. 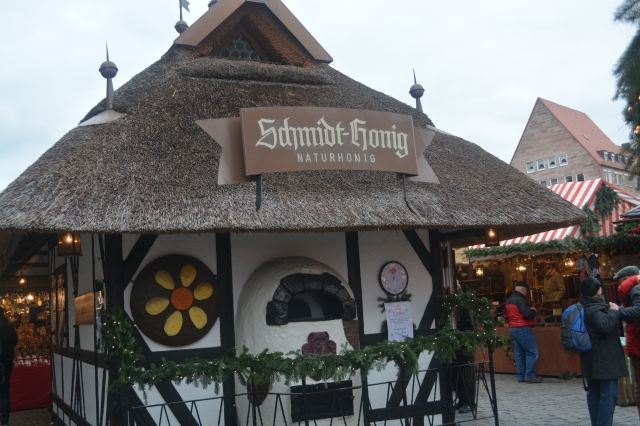 The Christmas market in this square is said to be the oldest in Germany, in fact the world.  It was not at as large as I had thought, but we did find a few nice and unique items.  Nuremberg is also famous for its bratwurst and we tried one of the small sausage sandwiches.  There was also nuts and gingerbread to be purchased.  Boris found an ATM; between the sausage and his cash,  he was happy.

After a bus ride back to the ship, we had a nice lunch aboard.  Some people were headed back into town to return to the Christmas Market, but Boris and I joined other passengers for an optional WWII tour focusing on the Nuremberg connection.  We went first to the Nazi Rally Grounds.  Because bombing was focused on the manufacturing facilities and military personnel, the rally grounds were generally untouched by the bombing.  Our first stop was the Zeppelin field, familiar from the propaganda photos taken in this area.

100,000 men could stand in Zeppelin field while another 60,000 could sit in the grandstand and surrounding stadium seating.  The stastika on the grandstand was destroyed by American military after the War and in 1967 the city removed the roman columns and backdrop from the stage to keep the grounds from being a pilgrimage site for neo-nazis.  Zeppelin Field was part of a much larger, multi-building complex that was to be completed after the war. 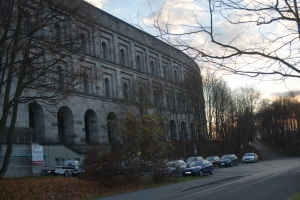 Exterior of Congress Hall on the Nazi Rally Grounds, now a museum entitled the Documentation Center. Congress Hall was modeled after the Coliseum in Rome. ©Jean Janssen

After leaving Zeppelin Field, we went to the Documentation Center.  There is no mistaking what building this is modeled after, the Coliseum in Rome.  The building, originally called Congress Hall was designed with an opening to hold 50,000 people in the center.  Congress Hall was never completed.  It now houses a museum.

Photograph of the Nuremberg Trial defendants guarded by military police.

Our final stop of the day was at the Palace of Justice, chosen as the site of the war crime trials of the most notorious nazi criminals.  Unlike most of Nuremberg, the Palace of Justice and the prison just behind it had survived the WWII bombing and could be made relatively secure.  To avoid sniper attacks or escape attempts while the prisons were transferred, a tunnel was built to connect the buildings and the prisoners were brought up directly to the courtroom via elevator.  The curtains to the courtroom were kept closed during the proceedings. 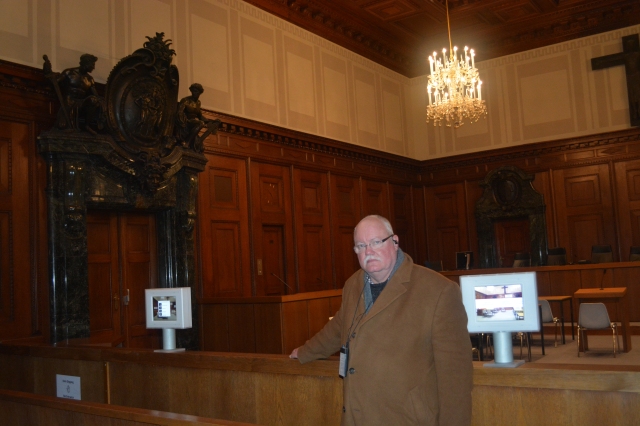 Boris in the courtroom at the Palace of Justice site of the Nuremberg Trials. The defendants block is against the wall with the elevator control and doors visible against that wall.
©Jean Janssen 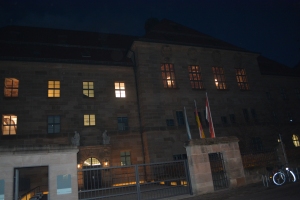 East Wing of the Palace of Justice where Nuremberg Trials were held. The courtroom is on the upper floor to the right in the photograph.
©Jean Janssen

This courtroom is still active so it is not always available for visitors.  We were very fortunate that court was not in session late this Monday afternoon so we were able to go inside and take photographs.  As attorneys, it was quite a moving experience for Boris and I. 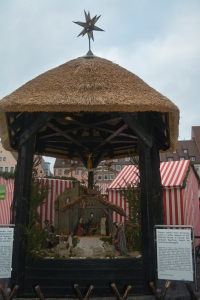 On the ride back to the boat, our guide, born and raised in Nuremberg told us about his own family’s experiences.  Some were supporters of the nazis; some were not.  His great grand father was originally a member of the party but became disillusioned and began to speak out against them.  He was imprisoned and when released did not speak of his experience.  When the Americans retrieved records after the war, he was identified and was asked to serve in the post-war tribunals.

Our boat leaves dock today and we are off for more Christmas adventures after a full day of history.  Let the water travel begin…Merry Christmas from Natasha.

I am a retired attorney who loves to travel. Several years ago I began working on a Century Club membership achieved by traveling to 100 "foreign" countries. Today, at 49 years of age the count is at 82. Many were visited on land based trips. Some were cruise ports. Some were dive sites. Most have been fascinating.
View all posts by travelbynatasha →
This entry was posted in international, River Cruise and tagged Nazi rallies, Nuremberg, Nuremberg trials. Bookmark the permalink.