The Monks Brew Beer in Salzburg

Augustinian Beer Hall in Salzburg, Austria. The locals in their element. Note the beautiful carved deep stained wood on the ceiling, walls, and chairs and the lovely stained glass.
©Jean Janssen

Boris hasn’t had the chance to do much in Salzburg given the meeting schedule, but we skipped the “included” dinner at the Schloss tonight to go to the Augustinian Beer Garden.  It is the largest in the city and we have been told the best place to see the locals in their element.  Along the Salt River and across from Mirabell castle you can see the church that is attached to the several large yellow buildings that make up the brewery and beer garden.  There is a exterior area set up for the warm weather; that area was largely empty tonight.  Inside there are several large rooms, the smaller one set up for smokers.  In the hallways are “cocktail” tables where you can stand and have your beer.

This photo gives you a better look at the arched wood ceiling. Check out the beer mugs on the cart. Boris had three of the large ones.
©Jean Janssen

You can bring your own stein or pick up a large or extra large nondescript one that you take over and fill yourself or have a seat and a server will get it for you.  There are a few other choices for the non-beer drinkers that are self-serve.   There is also a sort of “food court” with very good and basic German food.  We tried lots of sausages and potatoes.  I am not a sauerkraut person, but Boris tried that too.  And just because, we finished with a big crème puff, the best I ever had.

Boris and his beer. He might not look so happy now, but after three of these…
©Jean Janssen

This is an old, large wooden beer hall with stained glass windows and carved wood accents.  You sit on long benches against the wall or on carved wooden chairs.  Talk about people watching.  The place was packed; we actually had trouble finding a seat.  We got there about 6 pm and it was an older crowd.  About 7, it began to transition to a younger group.  There were very few tourists and the locals clearly have their regular seats.  I tried to discreetly take pictures, without being able to really do the room justice.

The Beer Hall is open to families and you will see young parents bring their children inside.  In fact a young couple with their son sat at the end of our bench and had their drinks and something to eat.  I asked if I could take their picture and when they left, the father had the young son tell me goodbye. 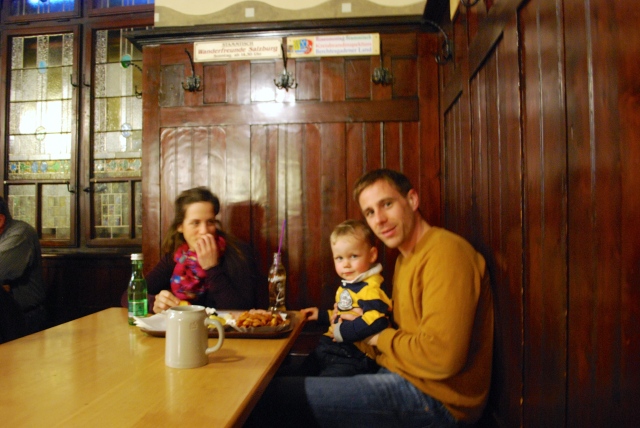 This young Austrian family sat on the end of our bench in the Augustinian Beer Hall in Salzburg.  Dad enjoyed his beer, mom and son nonalcoholic options, and all the wonderful food. The Austrian beer halls are considered family-friendly.
©Jean Janssen

Oh yea, about the beer.  Well I myself do not enjoy beer.  But Boris thought it was some of the best he ever had.  He filled his extra large mug three times, drinking the equivalent of 3 liters of beer.  We took a cab back to the hotel. 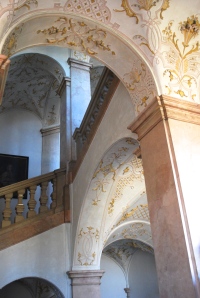 Boris wanted to meet up after his meetings today, so I didn’t have time to take the bus to the Untersberg cable car as planned.  Instead, I walked around the Schloss and took more pictures.  You have already seen photos of the Venetian Room, Chapel, and the Terrace Gardens facing the lake, but there are more public spaces available to guests of the hotel.  On the first floor (second floor under the American way of counting), is the most spectacular private library I have ever seen.  I can’t tell you about the book collection, but the room was amazing.  I even had the chance to go up to the second floor library balcony, reached by a secret entrance.  The hidden staircase allowed the Archbishop, the original owner, to move between his bedroom suite and both floors of the library without encountering any “commoners”.

Adjoining the library is a small study on one side and two larger rooms not used for meeting.  The McGowan Room is rather nondescript, but the Chinese Room is quite beautiful and has the advantage for facing the lake.  The Venetian Room is also on this floor on the opposite side.  After ascending the spectacular stone staircase, you reach the library and the adjoining rooms by going through the Marble Room, the very center of this floor.  This ballroom is three stories high and has small musicians’ galleries on each end.  Fireplaces with delftware tiles face each other in the center of the room.  There are some pretty great chandeliers too.  We actually ate three meals a day in this room (except our brewery excursion evening and the day I missed lunch for the Sound of Music Tour).  We have gotten a little spoiled by our surroundings.

Natasha at the trellis that Maria runs through in the Sound of Music. Mirabell Gardens, Salzburg, Austria.
Boris is convinced I offered him the Salzburg tour so I could get pictures like this. I’ll never tell.

I met Boris after his seminars and we had lunch in the Marble Room before heading into town.  I played tour guide.  I suggested we start at the far end near the Mirabell Gardens and work our way back.  Boris was convinced I had ulterior motives and just wanted him to take pictures of me at Sound of Music film locations.  We worked our way to Kapitalplatz, stopping at the monk’s bakery to buy some fresh rolls, and took the funicular up to the Fortress, something I had not yet done.  There were quite a few buildings at the top and first-rate views of the old city and the mountains on the other side.  I tried to take some selfies of Boris and I, but all you can see is us with no clue that is Salzburg in the background. 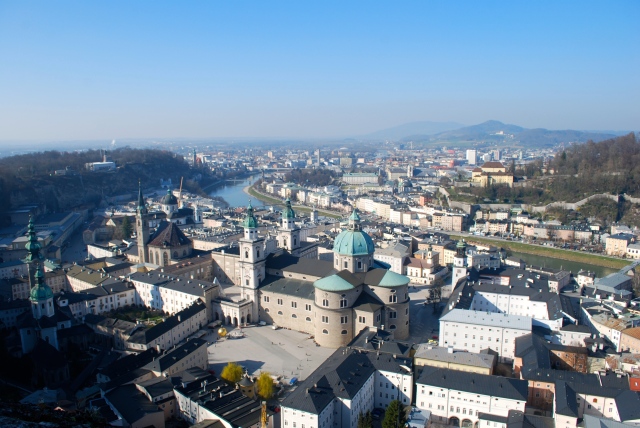 View of Salzburg from the fortress.
©Jean Janssen

When we got back down, Boris wanted my opinion on a coo-coo-clock.  He is buying it for the farm.  I bought a drawing from a artist who was doing watercolors; I chose one of the Mirabell Gardens with the Fortress in the background.  After our shopping we went back to the Schloss to change for tonight’s piano concert and closing dinner.  I have a solo verse in a revised version of “My Favorite Things” prepared to thank the leader of the conference.  This is what I get for Boris telling everyone I was in the musical in high school.

Tomorrow is an early departure.  We have a 6 am train from Salzburg to Munich where we will catch a plane home.  Some final thoughts on Salzburg and travel suggestions in the next post.

St. Peter’s Monastery, Salzburg, Austria. I love the ironwork. It is the same style that appears in the adjoining cemetery.
The floor of two different local marbles is the same pattern and material as the floor in the
Schloss Leopoldskron where we are staying.
©Jean Janssen

I am a retired attorney who loves to travel. Several years ago I began working on a Century Club membership achieved by traveling to 100 "foreign" countries. Today, at 49 years of age the count is at 82. Many were visited on land based trips. Some were cruise ports. Some were dive sites. Most have been fascinating.
View all posts by travelbynatasha →
This entry was posted in international and tagged Augustinian beer garden, beer garden, mirabell gardens, Salzburg, Salzburg Austria. Bookmark the permalink.