Posted on January 19, 2014 by travelbynatasha

Our next stop is Maputo, Mozambique a destination clearly only included in the itinerary on the urging of their tourism agency.  During the Portuguese domination Maputo was known as Lourenco Marques.  The city, the country’s largest and its capital, is clearly not set up for tourism.  The guide struggled to find enough locations to take us to fill up the four hours.  The architecture is a mix of crumbling colonial, Soviet bland, and shanties.  I will complement them on the mode of transportation.  We rode in wonderful vans with plush seats and air conditioning.  The van had instructional signs inside indicating that it had been manufactured in Japan or was intended for Japanese tourists.  Locals rode under much harsher conditions.

Interior of the train cars still used at the Maputo station. Nothing seemed to be updated. If the window breaks, they just leave the pain empty.
©Jean Janssen

Our first stop was literally just moments outside the port gates.  We stopped to see the Maputo Train Station designed by Eiffel.  It is still used daily by computers and those going to destinations outside Mozambique.  Immediately upon stepping from the coach, we were bombarded by people trying to sell us anything we would be willing to buy.  They were in your face and all around you.  I was not struck by fear, but the situation was annoying and sad.

The station was lovely in its fading glory.  It was a place that time forgot.  The cars, which we were able to step inside, continue to deteriorate and continue to be used.  Outside, in addition to the hawkers, people stood waiting for buses and vans.  This is clearly the transportation hub of the city. 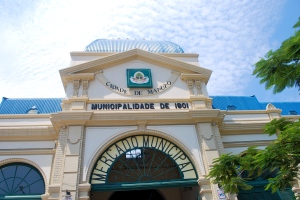 Our next stop was the municipal market.  Many of the vendors here wore native costume, but we had been warned to ask before taking a person’s picture.  We saw mostly food items, the fish completely covered with flies.  I think there were even more street peddlers outside the market than at the train station.  I got separated from the group due to the large crowd and followed the guide’s instruction to wait for him at the entrance.  He then transferred us through the gauntlet of peddlers to our van.  While we waited for the others, we were hit up through the door and windows to buy t-shirts, woodcarvings, flip-flops, jewelry, and more.  As usual, Boris bought a few things.  One couple insisted on taking a taxi back to the ship.  He told the guide he didn’t feel well, but I think the street vendors had taken their toll on the couple. 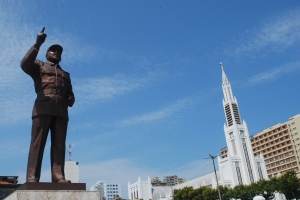 We next went to Independence Square to see the interesting statute of Field Marshall Michele, the first “so-called” President, although actually a dictator, of independent Mozambique.  On the “square”, actually a circular thoroughfare, was a Municipal Building, and the Cathedral.  Seeing the interior of the Cathedral with its African art was to have been the highlight of my day.  It was closed.  Apparently, it is common for the Mozambique government to arbitrarily close buildings with no warning.

We went next to the Iron House, literally a building made of iron, which was also closed.  Clearly constructing a house of iron in this hot and humid climate was not the smartest idea.  It remains an oddity for tourists.

The Museum of Natural Science, Maputo, Mozambique. the Museum’s claim to fame is its collection of elephant fetus.
©Jean Janssen

Our next stop was the Museum of National History, whose claim to fame is its collection of Elephant fetuses.  Mostly, the museum held taxidermy animals in violent (although realistic) poses.  Our guide said this stop was a favorite among tourists; I don’t think today’s guests would agree.  Boris’ favorite line of the day was the guide telling us that all the animals inside were real, but the dinosaurs outside were not.  Really?  The outside dinosaurs were something you would find in a children’s playground.  I want to meet the person who thought these were real.

Drink vendors at the Costa do Sol, Maputo, Mozambique. Everything is sold in glass bottles and there is broken glass everywhere on the beach.
©Jean Janssen

We drove next by a house owned by the Mandela family, many of the beachside foreign embassies, and the homes of many of the government officials.   The route to the popular  Costa do Sol public beach was so full of potholes our driver was constantly swerving from side to side.  I noticed the vendors selling drinks or bar-b-que chicken on the side of the road.  Our guide said our planned stop was for 30 minutes, but he wasn’t sure that we would want to stay that long.  Everyone said 10 minutes, except for a single older woman in the front who wanted her full 30 minutes.

I got out briefly and took a few pictures and watched Boris bargain for “worthless crap from all over the world” (as his nephew puts it).  Then, I retreated to the air- conditioned comfort of the van.   I have never seen more broken glass in all my life.  One guest commented that he couldn’t understand with all the beautiful beaches in Africa, why we had been taken to its ugliest.

Get a snack of peanuts at the beach, Maputo,
Mozambique
©Jean Janssen

The peddlers followed Boris to the van and to the delight of all the other van guests, they continued to thrust items into the van though the doors and windows hoping for another sale.  Some had rather long arms.  After 30 minutes the older guest reappeared, the guide on our elbow, and announced that she had had a lovely stroll on the beach.  The rest of the guests who had been sitting in the van for 25 minutes of her 30-minute stroll, just smiled.

There was a drive back to the city where the only new buildings we passed were government property and we were reminded that in Africa, it is often only the politicians that enjoy any wealth in independence.   I did see an interesting machine along the side of the road that I asked the guide about.  It was for extracting the liquid from sugarcane.  You purchased a stalk and then took it to one of these entrepreneurs for the extraction.  We passed a fort in route and Boris was disappointed that a visit there was not part of our itinerary. 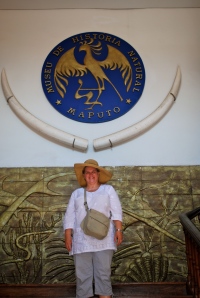 I am sorry that I cannot enthusiastically encourage other travelers to visit Maputo.  We had an excellent guide, but the city does not have much to recommend it.  Upon independence, the oppressive Portuguese that had colonized the area fled, taking with them the capital investment and educated leadership.  Government corruption has meant the diversion of funds into political ventures or the politicians’ pockets and the people remain desperately poor.  I remain hopeful for the people.  If you travel in Mozambique, take along your own toilet paper.

Today, I did reach 99 countries in my quest for membership in the Travelers’ Century Club.  I will reach the milestone on our next stop in Madagascar.

I am a retired attorney who loves to travel. Several years ago I began working on a Century Club membership achieved by traveling to 100 "foreign" countries. Today, at 49 years of age the count is at 82. Many were visited on land based trips. Some were cruise ports. Some were dive sites. Most have been fascinating.
View all posts by travelbynatasha →
This entry was posted in cruises, international, Uncategorized and tagged Lourenco Marques, Maputo, Mozambique. Bookmark the permalink.