Posted on January 16, 2014 by travelbynatasha

Our second full day in Cape Town we were able to board the ship.  Our hotel shuttle driver took us directly to the pier gate where a porter took our bags into a small storage building where we did a brief check-in before going to the registration desk on the ship.  We were able to get on at 1 pm and have lunch, although the rooms were not ready until 2 pm.  I was pleasantly surprised by our stateroom, having feared that like the rest of the ship it would be a miniature version of Silver Seas Spirit, the newer larger ship we took to Morocco and loved.  The room was nice and we once again had a walk-in closet.  The bathroom is much smaller, to be expected on a smaller ship.  Since my bag was in the room, I started the unpacking; Boris’ bag arrived during the process.

Dinner in the restaurant that evening was ho hum and the service spotty.  Having visited the Victoria and Albert Waterfront the day before, I didn’t get back off the ship.  Boris has the start of a cold, so he went ashore to get some medicine.  We enjoyed our lovely view of the harbor and Table Mountain from our balcony; glad we had visited the day before when the top of the mountain was not covered in clouds.  We are still not on a regular sleep schedule and I am anxious to get in line with the South African clock.

After our overnight on the ship in port, we have an excursion before our ship leaves Cape Town at 5 pm.  Our peninsula tour will take us to the Cape of Good Hope, to see the African penguins, and to Cape Town’s beautiful botanical gardens.  We started early and discovered that there were only 13 on tour, even though we had a large bus.  We headed back to Cable Bay, this time in the opposite direction of our hop on/hop off tour bus.  There were people walking dogs on the beach or a few in exercise clothes on the boardwalk, but otherwise the beach was deserted.  Farther down the room, a 30k race was taking place.  We saw runners heading toward us and cyclists headed in the same direction as our bus.

The Sentinel at Chapman’s Bay, South Africa. The area below is called the dugeons by surfers. The Bay holds the record for surfers, 103 on one wave.
©Jean Janssen

Just past Chapman’s Bay the road got tight and we drove very close to the wonderful rock formations.  This stretch of road had been closed for a time while protective measures were added to prevent rocks from crashing into motorists (after a successful lawsuit in which just that had happened.).  We stopped at a lookout point and we able to photograph the bay and the rock formation on one end, the Sentinel.  Just below is a famous surfing spot called the Dungeons.  Name says it all.  We passed Hout Bay and Kommetjie, a Dutch community and the only part of South Africa where the current ruling party is not the majority. 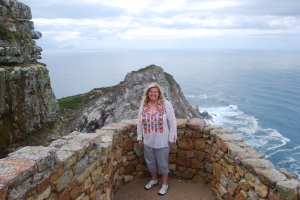 Natasha at Cape Point, South Africa where the Atlantic and Indian oceans meet. The southern most point in Africa.

We finally reached the Cape of Good Hope National Park.  All the plant life here is native to the area and the wild grasses, many of which flowered, were quite beautiful.  We drove almost to the top of the rock formation and then took the funicular up to the lighthouse.  There was a lovely view of the white sandy beach and the water where the Atlantic and Indian Oceans meet.  We drove down to the shoreline to the Cape of Good Hope where our guide showed us the dry kelp that is now being harvested for a variety of uses.  We saw kelp all along the shoreline on the Cape and back toward Cape Town.  We also had our photo op by the sign marketing the southern most point of the African continent.  Boris and I had our picture taken by the sign in Afrikaans; there is also one in English. 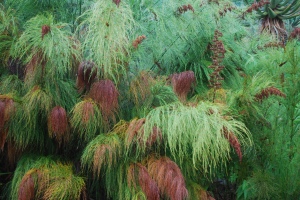 Our way back to Cape Town was along the coastline of the Indian Ocean.  We had come out along the Atlantic.  The closest to the National Park had a large ostrich farm.  These birds have lean meat that has become more popular and their feathers are used in costumes for Carnival.  In another community, Scarborough, all the residents landscaped their yards with native flowering grasses; it was lovely.  Many of the communities along this coastal highway are home to individuals who serve in the South African Navy.

The springbokkie (shot), the national drink of South Africa named for the rugby team, the Sprinkbok (an antelope)
©Jean Janssen

Our next stop was for lunch at a local open-air restaurant next to a very popular public beach.  It was a Sunday during the summer holidays and families had set up tents and were enjoying the water and the sun.  We had a fabulous meal of fried sea bass and calamari.  We also got to know some of our fellow tour participants.  There was a young couple from the Locata, Switzerland (the Italian part of the country); an 86-year-old woman from Vancouver whose accent betrayed her years growing up in Montreal; and an adorable couple from Denmark whose company we really came to enjoy.  At the other table was another Swiss couple, but from Geneva where French is the primary language; a couple from Nice, France where the wife spoke very little English and the husband none; and an annoying couple from New York who kept trying to pay for souvenirs with American dollars after repeatedly being told that only local currency was accepted.

We were definitely the “fun table” and the guide came over to us when it was time to try the local drink, a springbokkie (almost like the name of the SA rugby team).  Our 86-year-old, enjoying the trip as a birthday present to herself, was our guinea pig.  She drank it as a shot.  See, I told you we were the fun table. 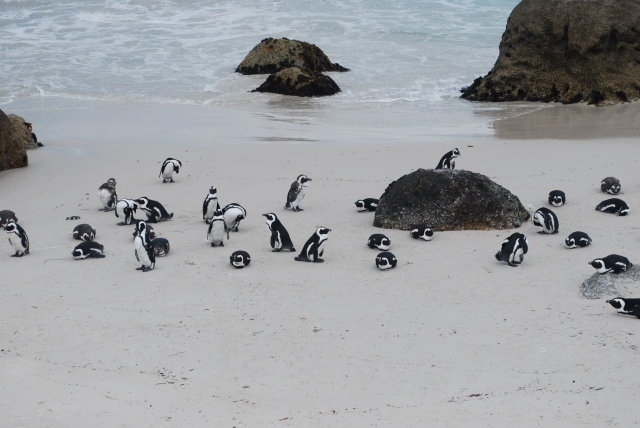 From the restaurant, it was a short walk over to the National Park that is home to the African Penguins, formerly called jackass penguins for the sound they make.  Our friend Angela from Birmingham, England had been bitten by a penguin here and it took a full year for her to recover.  One young child, observing some penguin activity asked her parents if the penguins were mating.  Upon receiving a positive reply, she announced that she “didn’t think they should be doing that on Sunday.”  The penguins were not the only entertainment.  While smaller than the penguin colonies were visited in South America, it was no less exciting.

I loved these pineapple flowers that we saw at the Kirstenbosch Gardens in Cape Town, South Africa.
©Jean Janssen

The wind had grown quite strong; as we returned to Cape Town for our final stop at the botanical gardens, it began to rain.  I think the guide expected most of us to say we were not interested under the conditions, but most of us went in anyway and were lucky as the rain stopped and we were able to enjoy the green gardens of Kirstenbosch.  I recommend a visit and only wish I had a blanket, picnic basket, and a good book.  I could have stayed for hours.  There was also to be a concert there that evening and given the long lines, it appeared people were not discouraged by the bad weather.  Kirstenbosch reminded me of the Meijer Gardens in Grand Rapids, Michigan.

We were pulled from the dock in the Victoria and Alfred Waterfront by two tugboats.
©Jean Janssen

When we reached the ship, we found out that our entire tour group had missed the muster drill.  We will have to do it tomorrow on the sea day.  We decided to view the sail away from our room.  There were two tugboats pulling our ship away from the pier.  It was quite exciting seeing the ship maneuver out of the relatively small harbor.  There were quite a few officers on the overhang pilot station, including one woman in blue.  When we finally got out of the harbor and I saw her board the pilot boat, I realized she was the port pilot.  All our ship’s officers had been dressed in white. 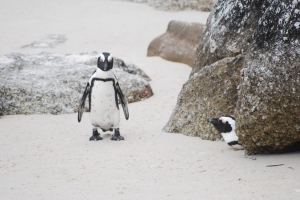 After we cleared the harbor, I quickly got into the shower so I could be ready for our dinner at La Terrazza, the Italian restaurant on board.  I could barely stay standing, the storm that we had seen coming had made the sea rough.  It was so bad that after we got to the restaurant, Boris immediately switched sides of the table so he didn’t have to see us battling the high waves.  Before the first course was even served, he excused himself and said he just didn’t think he could eat.  By the time I went back to the room, the stewards had lined up seasickness bags along the railings in the hallway. 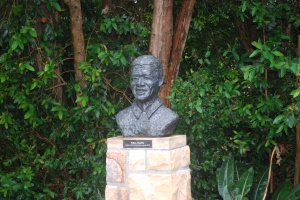 We had a horrible night.  It was almost impossible to sleep for any stretch of time, as the sea grew worse.  By morning, I didn’t think I could take it any more and skipped breakfast.  The only place that was reasonably comfortable was lying down in bed.  You couldn’t walk around because you couldn’t stay upright.  Even sitting up, you would begin to feel nauseous.  It was the roughest seas that I had ever experienced and I cursed the day I had ever let Boris talk me into this smaller boat.  It took a full 24 hours before things calmed down and all I did all day was to attend a lecture at 4 pm and our make-up muster drill after that.  Boris had gone to trivia and didn’t make the drill, but fortunately for him they did not take attendance.  What a way to “enjoy” the first sea day. 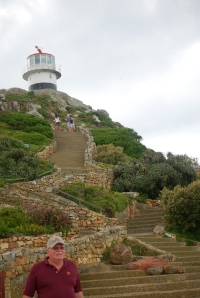 Luckily I was able to stand in the shower to get ready for the formal night.  We skipped the Captain’s Reception (no standing for me) and went straight to dinner.  Best meal we have had on the boat so far-escargot, mushroom soup, and lobster.

We sat at a table next to a couple from North Carolina; their Welch accent was so strong you would never have guessed that they had lived in NC for 47 years.  We enjoyed visiting with them between courses and it was a nice way to close out the evening.  Now we are just hoping for a good night’s sleep, something that has eluded us since our arrival in South Africa. 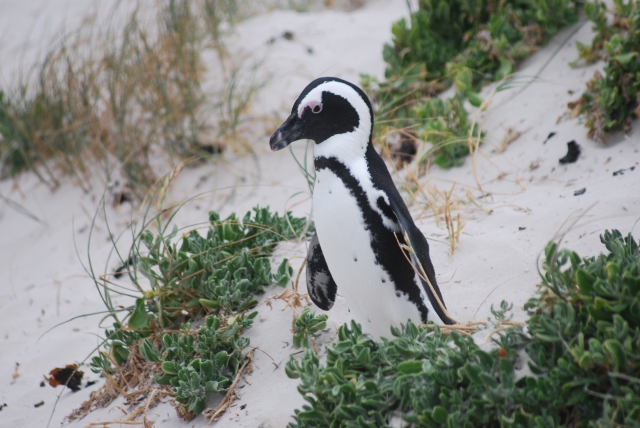 I am a retired attorney who loves to travel. Several years ago I began working on a Century Club membership achieved by traveling to 100 "foreign" countries. Today, at 49 years of age the count is at 82. Many were visited on land based trips. Some were cruise ports. Some were dive sites. Most have been fascinating.
View all posts by travelbynatasha →
This entry was posted in cruises, international and tagged African penguins, Cape of Good Hope, Cape Point, jackass penguins, Kirstenbosch, South Africa. Bookmark the permalink.