Sea Days on the Azamara Journey AKA Boris and the Showgirl

Ah, sea days.  Some cruisers don’t like them.  But in my opinion, sea days are what put the vacation in a cruise.  Otherwise, you will just go home more tired and sunburned than when you left.  We have quite a few sea days (6) on the Spice Route on the Azamara Journey.

I learn a lot of things on sea days.  (On ships that have them) the self-service laundry rooms are the place to get the most gossip-per one of the ship’s officers.  We like the enrichment series lectures that usually take place on these days.  Sometimes they are educational dealing with the history, economy, and culture of the places we are visiting or purely fun like discussing the investigation around Marilyn Monroe’s death.  You can learn how to play bridge, built a ship, play darts, surf, or ice skate (among other things).

Considered adding pearls to my pool bag but decided against it.
©Jean Janssen

I am usually a pool princess on sea days, but with temperatures in the 90s F (30s C) my sun exposure has been limited.  The breeze just isn’t enough to compensate for the high temps.  It’s a pity too because the Azamara Journey has wonderful cushions on their lounge chairs, so it would be a perfect place to spend an afternoon or take a nap.  It is casual of course, although I did see one woman go into the pool wearing her pearls.  (I saw her at the pool three times and she was always wearing her pearls.

Charisa is one of the singers on the Azamara Journey. She used to perform at Hollywood Studios and The Magic Kingdom at Walt Disney World. She ran many of the trivia games that Boris attended. He liked to refer to her as the showgirl.
©Jean Janssen

Boris, of course is playing trivia.  He keeps comparing himself to Tiger Woods.  He is doing well again and has found a soul mate in Angela from Birmingham, England.  Between the two of them, they usually get a perfect score.  I am really not sure what the rest of the team does; no one actually asks them their opinion.  Charisa, a young blonde who is also one of the singers/dancers on the ship, runs some of the games.  When she told Boris that she would like to be on his team and that he needed to come to the show (which she probably tells many of the guests), he came running to tell me that we had to go or Charisa (who he refers to as a showgirl) would be upset.  He had the decency to blush when I told the Barnes that story.

Of course it wouldn’t be a sea day without the extra special food options like Tea Time and Gala Brunches.  We also signed up for a Chef’s Table Experience on one of the early sea days.  It is a seven-course dinner with wine pairing organized by one of the sommeliniers and it limited to 10 guests.  A senior officer hosts this specialty dinner.  The head chef visits your table at the beginning of the evening and the specialty restaurant chef comes to introduce each course.  Our dinner had an Italian theme for the food and wine pairings (although we began with a champagne).  We had a fabulous time and made some new friends, Frank and Janet, at the dinner.

Frank and Janet are from just north of London; they are fun and funny.  They hunt for sun or a pool in each of our ports.  They always find the spot with the best spa deals.  Frank, who is a judge, told us a wonderful story of going to get a new pet.  When he picked out his new kittens, the 40ish attractive woman owner thought she knew him, and he her.  By the time he went back to pick up the kittens a few days later after the kittens had gotten their shots, he had remembered where he knew her from.  Apparently she had too.  The money/kitten exchange was very quick.  No one mentioned the first meeting when she had been in from of him for solicitation.

Theo, on the left, was one of the senior officers on the Amazara Journey who served gelato on the pool deck to guests. There is a lot of interaction between the officers and guests, the most I have ever seen on a cruise ship.
©Jean Janssen

You could also add lots of toppings to your ice cream and have it on a cone or on top of a waffle.
©Jean Janssen

At the dinner we also met the ship’s Chief Financial Officer, Theo from Greece.  He was a wonderful dinner companion and it has been fun running into him around the ship since the meeting.  I have never seen another cruise line where there is so much interaction with the senior officers.  If you are in the line’s past guests program, the senior officers hosted and served you at a champagne brunch and you see them milling with the quests at the frequent cocktail parties.  All the guests see them when they host an Officers’ Gelateria, serving ice cream and toppings out on the pool deck.  Today, they are hosting a lunchtime bar-b-que.  I had to give Theo a hard time; I questioned whether he was actually in the food service department after he served me food both the second and third times I ran into him.

In addition to the senior officer interaction, another way Azamara distinguishes itself is with the bonuses given to their past passengers. Besides the usual cocktail parties, there was a Champagne Brunch, coffee tasting, and wine and cheese party.  I love the coupons-two bags of free laundry-cleaned and pressed-and almost 8 hours of free internet time between the two of us. 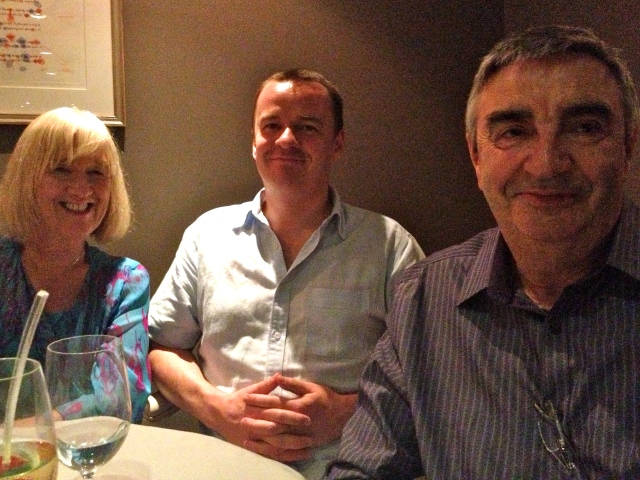 Our friends from Birmingham (Mosley), England, the Barnes Family. Mom Angela instructs and grades exams, the equivalent of of SATs or ACTs in the US. Son Barnaby is a detective sergeant (soon to be Inspector) in the Birmingham Police Force; Dad Joseph is a retired University Dean. They all helped Boris to victory in trivia and were wonderful lunch and dinner companions for us throughout the cruise. This was taken at one of the special Chef’s Table nights we attended with them.
©Jean Janssen

One of the things I have come to enjoy about these smaller ships and a longer cruise, is that you get to make friends and run into them on the ship throughout the voyage.  We have frequently asked and been asked to join others for dinner.  The passengers on this ship are very friendly, down to earth, and overwhelmingly English-speakers- although not necessarily from the USA.  In fact I think the Aussies are the largest group (followed by the Brits).  Today when the captain came on to make the noon announcement, he apologized to the Australian guests he was waking up with the PA.  Apparently, the Aussies had kept the disco/bar open for a record number of hours last night/this morning. (It doesn’t close until the last guest leaves.)

We have made friends from all over the world and got heard some wonderful stories.  There can of course be disadvantages to the small ship as well.  One couple told us of being propositioned by a swinger couple one of the first nights on the cruise and the great lengths they now go to avoid the couple on the ship.  It would be hard to beat that story.

Ah well, the pool calls.  I am going to squeak in some time before the next cocktail party.  Natasha does have a rough life…

I am a retired attorney who loves to travel. Several years ago I began working on a Century Club membership achieved by traveling to 100 "foreign" countries. Today, at 49 years of age the count is at 82. Many were visited on land based trips. Some were cruise ports. Some were dive sites. Most have been fascinating.
View all posts by travelbynatasha →
This entry was posted in cruises, international and tagged Azamara, Azamara Journey. Bookmark the permalink.