Natasha does some cruise cooking-Sea Day on Oceania’s Marina

Posted on February 3, 2013 by travelbynatasha 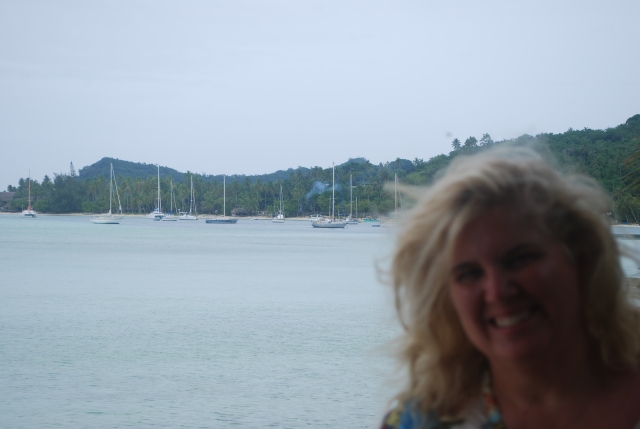 Natasha checks out the Society Islands of French Polynesia

A rainy sea day can be the perfect time to enjoy a book by the “fire” in the library aboard Oceania’s Marina.
©Jean Janssen

We don’t have many sea days on this cruise, but today was our first.  It is also our first day without rain so normally you would find me out at the pool all day.  However, I have signed up for a cooking class.  Most ships offer cooking demonstrations as part of their on board programming.  However, Oceania offers the only cooking classes at sea with a hands-on experience.  Their two new ships, the Marina and the Rivera, both have full culinary centers with student stations for 24 guests.  Of course there is a charge for the class, but it is very reasonable for the two-hour experience.  The cooking classes on this itinerary are all fully booked.

Traditionally, the islanders kept their boats raised to protect the wood from rotting out. Even though most of the boats are now made from fiberglass, the tradition of the raised boat continues.
©Jean Janssen

Fortunately, I booked ahead on-line and was able to get into all of the three classes I was interested in.  Today we are preparing a brunch menu.  You have a partner and we shared a cooking station.  To move things along, some of the prep work was done for us.  Each team had its own equipment.  The classes offer something for the novice as well as the seasoned cook.  My partner was an experienced cook, but she felt she did get something out of the class.  This was my first experience at a hands-on class.

Chef Natasha. Chef Annie did have to remind us at times that this was a cooking and not eating class. Aboard the Oceania Marina in the South Pacific

I learned how to make perfectly poached eggs, a vegetable frittata, scones, and a root vegetable hash.  Latkes and poached salmon were prepared by demonstration.  Any teacher who starts the class by serving everyone a mimosa is all right by me. Our instructor was Annie Copps, a frequent guest on the NBC Today Show.

Chef Annie was entertaining while conveying a great deal of information.  It wasn’t just about the recipes either.  Knife types, opening a champagne bottle, and basic cooking techniques were also covered.  I learned some wonderful knife skills!! 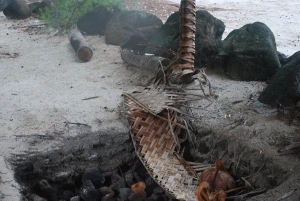 After class, I crossed the pool deck (on the same level of the ship) and all the chairs were full.  It is a testament to how great the class was that I didn’t regret attending rather than snagging a lounge chair at the pool.  I headed back to the room and coated myself in sunscreen after that unforeseen sunburn in Raiatea.  (Boris is once again at trivia.  His team is undefeated.)   After adding a cover-up, I headed back to the pool deck.  The gods were smiling on me.  After a brief shower had sent guest scurrying for cover, chairs in the “sun” were now open.  Got one.  It was never hot, but I got a tiny bit of sun and didn’t add to my burn.  My back is now peeling.

Why you come to the south pacific…the beautiful clear water and white sand beaches. Near Bora Bora in French Polynesia
©Jean Janssen

I am a retired attorney who loves to travel. Several years ago I began working on a Century Club membership achieved by traveling to 100 "foreign" countries. Today, at 49 years of age the count is at 82. Many were visited on land based trips. Some were cruise ports. Some were dive sites. Most have been fascinating.
View all posts by travelbynatasha →
This entry was posted in cruises, international and tagged Bora Bora, Chef Annie Copps, Culinary Center, French Polynesia, Oceania, Oceania Marina. Bookmark the permalink.