Posted on October 30, 2012 by travelbynatasha 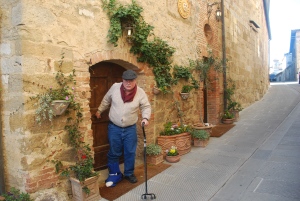 Boris, ready to set out from our home in Montefollonico, Tuscano, Italy.
©Jean Janssen

This is our first real full day of touring.  I let Boris make the selections since he is navigating and has the physical restrictions.  He has also done a better job of preparing for this trip, destination wise.  Normally I am all over reading the guidebooks and I did do that several months ago, but since the trip was up in the air until Wednesday of last week, I just didn’t want to read and get excited about a trip I might not get to take.

View from the wall walk in Pienza, Tuscano, Italy.
From the wall vantage point, you can see Monte Amiata and the Val d’ Orcia.
©Jean Janssen

We ate breakfast out of our stash at home (yea, we used some of the groceries) and set out to reach our first destination at 10ish.  The time changed here the day we arrived so it is getting dark earlier.  Our first stop was Pienza, only about 11 km from Montefollonico.  Oh but what an 11km it was.  I am an old pro at the driving now and had a chance to look at the scenery along our two-lane road.  Breathtaking.  The Tuscan hills and valleys are spectacular.  You constantly feel like you are looking at a postcard or National Geographic photo.

The papal seal is on the facade of the cathedral
in Pienza, Tuscano, Italy.
©Jean Janssen

Parking is always an issue, but since it was early we found a spot just outside the old city. Boris referred to this as a “model town”.  The guide books refer to it as “an exquisite Renaissance doll house” and an “utopian town”.  Pope Pius II took his home town of Corsignano and created the “first masterpiece in modern town planning”.  His architect was the Florentine Bernardo Rossellino.  With the addition of a cathedral, the pope renamed the city Pienza after himself.  The papal seal is found on the facade of the cathedral.  I found the city charming and perfectly situated. 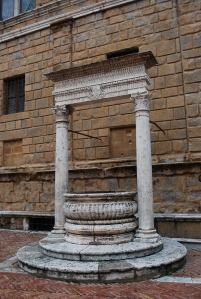 The well on the cathedral square, Piazza Pio II where you will also find the Duomo (cathedral), Palazzo Piccolomini (the pope’s home), and the Museo Diocesano.
©Jean Janssen

This is Boris’ first real day of pushing himself with tourism.  He had to deal with a lot with the air travel, but he was mostly in a wheelchair.  Today, at his request, we left the wheelchair in the backseat of the car and started out on foot and cane.  He took a few breaks which allowed me to wander around and take pictures.  However, my first stop was to buy a hat.  I came equipped with coat, gloves, and scarf, but with highs in the 30s something more was needed.  I bought this cute grey one without a thought as to how to get it home.  My visa didn’t work (my fault for not calling them before I left.  Amex is used to my foreign travel and told me I don’t need to call anymore before I leave.)  The grey hat took the last of my cash.  Thank heavens for a digital camera.  I can snap about without hesitation and it doesn’t cost a penny more to take those pictures.

A more fragrant option-mums in a cornucopia in Pienza, Tuscano, Italy. Actually, do mums smell? Everything in this area of the city smelled like cheese so I am not sure.
©Jean Janssen

We spent about two hours roaming around Pienza which has been rated the second best hilltown in Tuscany by Insight Guides.  (San Gimignano, one our residences during our honeymoon and the most romantic of them all, is well deserting of first place.)  Pienza is also famous for its excellent pecorino cheese and there was plenty of it to be found.  Not what I thought I was smelling the first time I caught a whef (you don’t want to know).  Its in such abundance that the smell was overwhelming.  Just follow your nose.

We hated to give up our great parking spot (and what an excellent job of parallel parking Natasha if I say so myself), but it was on to another of Insight Guides‘ top 10 hilltowns, Montepulciano.  We can actually see Montepulciano from the end of our street in Montefollonico.  When I was at the vantage point near Chiesa del Triano, I spotted and photographed this marvelous city without knowing what it was.  It is only 5 km away but reached by winding roads that are longer.

Montepulciano as seen from just outside the walls of Montefollonico, Tuscano, Italy.
©Jean Janssen 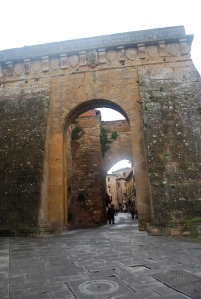 We parked just outside the Porta al Prato.  Its pre-paid metered parking and just suck it up and pay more than you think you will need.  You don’t want to have to walk down just to put in more coins.  (The going rate at press time is 1.3 euro per hour.)  Once inside, you quickly reach the Piazza Savonarola with a statute of the Marzocco lion on a column, the symbol of Florentine power.  Just to the left is a Bancomat so I replenished my cash.  Meanwhile, Boris spotted the wine tastings.

There are underground cellars in Montepulciano, some of which you can tour for free.  We went into one shop with an Etruscan tomb as the draw.  We tried three wines in the tasting and Boris got one bottle but I was unimpressed by the selections.  There is also more cheese and that smell.  Don’t get me wrong, I love the taste.

You follow this main street, Via di Gracciano nel Corso up to the main square, a long steep climb.  Lining the street are noble palaces.

One nobleman adorned the facade of this palace with Etruscan tomb markers (“headstones”).  The corso is also lined with shops of every kind and a few restaurants.  Wine tasting is abundant.  We were warned against coming to Montepulciano, but Boris really wanted to see the Piazza Grande (the main square) and so we started uphill.  Along the way were many wonderful photo opportunities and I took full advantage of his slower pace and rest stops to grab pictures.  One of my favorites was the bell tower across from Chiesa Di Santa Agostino with the figure on top.

The climb was extremely difficult for Boris and more than once I suggested that we had gone far enough, but he was determined to reach the top.  He knew that the climb was far too steep for me to push him up in a wheelchair.  At times when he leaned on me I could barely support his weight. After a visit to the Chiesa Del Gesu, we reached a crossroads to a scenic walk around and up to the plaza or the steep climb directly up to the high point.  This is where Boris said enough.  I frankly don’t know how he made it this far.  He sat down and camera in hand I made the last and steepest climb to the top.

Entering the Piazza Grande with the Palazzo Comunale in the background. Montepulciano, Tuscano, Italy.
©Jean Janssen

The Grand Piazza is indeed large, open, and impressive.  Few people had made it this far and the limited crowd made it seem even more massive.  The Cathedral is there along with the Palazzo Comunale, Palazzo Taruci, and the Palzzo Contucci.

I didn’t want to leave Boris long, but I did tour the Duomo and saw the Bartolo masterpiece, the Assumption.  I loved the gold altarpiece.

Anyone making the climb sees the same faces along the way, and I had an Australian friend snap a picture of me so I can prove I made it.  Note the grey hat, my purchase from earlier in the day.

On the steps of the Duomo (Cathedral) in Piazza Grande, Montepulciano, Tuscano, Italy.

I headed down to meet up with Boris.  I told him if he was ready he could start down and I would catch up since our parking meter would be running out.  He wasn’t in the place I left him so I was encouraged that he had started down.  I found him after a short distance enjoying a beer and announcing that he had ordered appetizers and that the bar had pizza.

The pizza that made it worthwhile. Along the Via di Gracciano nel Corso, Montepulciano, Tuscano, Italy.
©Jean Janssen

You should know I love Italian pizza, so much that I won’t eat American pizza anymore.  I looked at him, knew we had only 20 minutes left on the parking and also knew I couldn’t say no. (bribing me with pizza, how unfair is that?) Actually I knew he was disappointed to have not reached the top, we I trekked down to the bottom, added coins to the parking meter, and went back up.  I was so hot when I got there, off came the coat, gloves, hat, scarf, and the sleeves got rolled up.  Two beers in, Boris was happy and the pizza was worth it.  I also didn’t feel guilty eating knowing I had gotten that exercise.

I just liked this little guy and wanted to fit this picture in before the end of the blog. If you need to tie up your horse while visiting the Piazza Pio II in Pienza, Tuscano, Italy, you are all set.
©Jean Janssen

At our late lunch (by American standards), Boris discussed our next city, but after he made the climb down he was tired and we packed it in for the day.  On the way back, we found the old road to Montefollonico and I drove through the vineyards and the valley that I see from the end of our street near Chiesa del Triano.  It might have been the prettiest road of the day.  (It was certainly the roughest.)

As I anticipated, when we arrived home at about 4 pm (only 2 hours before dark), Boris took a nap.  I’ll be going to the store later in the evening-yes I forgot toilet paper the first day-and making dinner in tonight.  But for the rest of the daylight hours I will sit in the kitchen and work on this blog and enjoy a spectacular sunset from my garden with no regrets that we didn’t rush off to another hilltown.

I am a retired attorney who loves to travel. Several years ago I began working on a Century Club membership achieved by traveling to 100 "foreign" countries. Today, at 49 years of age the count is at 82. Many were visited on land based trips. Some were cruise ports. Some were dive sites. Most have been fascinating.
View all posts by travelbynatasha →
This entry was posted in international and tagged Montefollonico, Montepulciano Italy, Montepulciano Tuscano Italy, Pienza Italy, Pienza Tuscano Italy. Bookmark the permalink.