Antiques Fair in Round Top and Warrenton, Texas

Posted on October 16, 2012 by travelbynatasha

Robin Lindberg, the Queen of Heirs, owns the Campbell Building in “Downtown” Warrenton, Texas.
Robin sells fabulous estate jewelry
and also has a store in a charming house at the corner of Locust and Second Streets in Bellaire, Texas.
©Jean Janssen

Emma and I make the trip out to Round Top and Warrenton each fall and spring for the biannual antiques fair.  You can do your antiquing any number of ways.  In Warrenton, you can visit vendors who have set up tents along the highway and in the fields.  Behind the tents are the travel trailers where the vendors live for the two weeks they are in town.  If you are lucky, you own a building like my friend, Robin Lindberg AKA The Queen of Heirs.  The Campbell Building(with the wonderful red adirondack chairs out in front) is a landmark and offers interior shopping with real floors.  Robin has a wonderful hidden apartment right in her building.

On the square in Round Top, you can visit crafts vendors who have set up tents for the weekend (both the first weekend in October and the first weekend in April).  Across the streets is Royers Round Top Cafe famous for their pies.  Definitely not your standard comfort food.  Even if you can’t make it out to the fair, you can order their pies on line and they ship just about everywhere.  Headed north to 290,  you find shopping at the other extreme.  The Big Red Barn offers high end antiques in an air-conditioned building.  Some outside tents have been added in recent years and Royer’s has a lunch outlet there.

My first trip out to the fair was years ago when Rocky was in school and I took a commuter bus (as opposed to a school bus) from the church parking lot as soon as we dropped the children off.  The bus was great; we enjoyed snacks and breakfast on the way up and wine and cheese on the way home.  There was another advantage; if you bought something big you could slide it underneath.  The trouble came when you got back to the church lot and someone had to help you get it home. 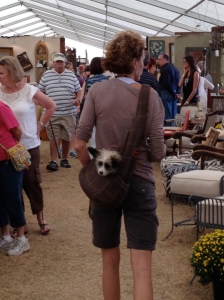 Lots of shoppers (and vendors) bring there dogs with them. This one was lucky enough to catch a ride.
©Jean Janssen

This is back when Emma Lee Turney was running several shows and you bought a ticket that got you into Rifle Hall, the Folk Art Tent, and Carmine, and the Big Red Barn.  Emily retired and most of the outfits are independent now.  Some charge admission like Marburger and the Big Red Barn, but others like the fields in Warrenton and Round Top Square are free.

You never know what you are going to find. I didn’t know I needed a rocking banana seat made out of bottle caps until I tried it out.

You’ll have to pay for parking in some places and I recommend driving the biggest vehicle you own.  It is not unusual to see people pulling a trailer behind their Suburban (and both the Suburban and the trailer are full).  It is not always the easiest parking and the roads can get very busy.  My car was hit once by someone trying to pull out on the road.  This was the occasion that I found out you could open a claim file right on the side of the road.  Knowing my State Farm claim was open (and the other driver was in the wrong), I continued my shopping. 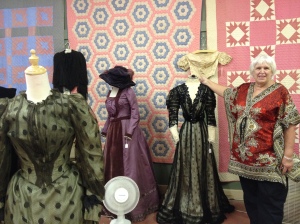 Mom at the Cat’s Meow Clothing Musuem in the Campbell Building in Warrenton. Steven Porterfield provides hats and clothing for the Downton Abbey Series and was also a supplier for Titanic.
©Jean Janssen

Sometimes Emma and I go looking for something in particular, sometimes we are just looking.  Going for a day twice a year, we know our way around and enjoy returning to some of our favorite vendors.  Frankly, I just enjoy spending the day with my sister.  This fall we took our Mom along and she did great keeping up.

A beautiful display in one of the tents at Marburger Farms Antique Show.
©Jean Janssen

From Houston, we take I 10 to Sealy and then get off and drive through Bellville, sometimes with a stop at Newman’s Bakery.  Then we take the back roads through Industry and Shelby before coming into Round Top at the square.  There is a nice show at the hall in Shelby, but it has fallen off a little on our last few visits.  This time we kept driving, passing Shabby Chic’s Rachel Ashwell’s new place The Praire which we visited last spring.   It was a Wednesday, so the square vendors were just starting to set up for the weekend.  We took a left on Hwy 237 in the direction of Warrenton and made our way to Marburger Farms, which sits roughly half way between Round Top and Warrenton.  Let the shopping begin…

I am a retired attorney who loves to travel. Several years ago I began working on a Century Club membership achieved by traveling to 100 "foreign" countries. Today, at 49 years of age the count is at 82. Many were visited on land based trips. Some were cruise ports. Some were dive sites. Most have been fascinating.
View all posts by travelbynatasha →
This entry was posted in domestic travel and tagged Campbell Building, Marburger Farms, Queen of Heirs, Round Top TX, Warrenton TX. Bookmark the permalink.

2 Responses to Antiques Fair in Round Top and Warrenton, Texas