Posted on October 11, 2012 by travelbynatasha

Maggie and Emma with EPCOT’s iconic planet earth in the background.
©Jean Janssen

On a fall trip to visit Maggie, we were in Walt Disney World at the same time as the 2012 EPCOT International Food & Wine Festival.  I had no idea what a big deal this was.  Obviously, people make this an annual event.  We saw lots of groups in their matching tee shirts with the event name printed on it.  There are actually 29 specialty booths set up around the World Showcase (the back section of EPCOT where the countries are located).  This section of the park usually opens up at 11 am.

We picked up a festival Marketplace Discovery Passport at guest relations when we entered the park.  You can also pick one up at any of the booths.  The passport details all the booths and sets out a place where you can mark the food and beverages you try.  We started with the idea that one of us would get something at each booth so we could all sample, but we only made it to eight booths before we were all full.  Actually, we were full before that, but we kept eating and drinking anyway.  The portions are sample-sized, but even samples in that number will get to you.

The passport also has a place for you to stamp each of the countries/booths you visit.  I saw a few people stamping and not sampling, but I call that cheating.  Besides, why would you not want to try things?  Everything we ate was delicious and we are kind of picky eaters.

Why not have your bachelorette party at EPCOT?
This bride-to-be was here with all her attendants.

Fair warning.  You can spend a fortune here.  (Maybe that is why some people were only stamping)  Most items were between $3 and $6; the drinks were higher, but they were full-sized.  It is billed as a food and wine event, but I saw more beer than wine drinking.  In EPCOT’s Germany, the food booth offers six varieties of wine and they have a separate booth for the eight beer offerings. 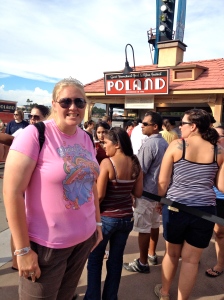 Maggie and I actually took a pierogie-making class in Poland when we visited there a few years ago, so we had to stop in and see what EPCOT’s Poland booth had to offer. (Kielbasa-Polish sausage-and Potato Pierogie with Caramelized Onions and Sour Cream as it turns out.) The Poland booth was one of the original entries in the festival and had one of the longest lines.
©Jean Janssen

The event, started in 1996, appears to be growing each year with new booths and the crowds to support them.  On the sign at each booth, it tells you when it was established.  Some of the items make repeat appearances, while others may be offered just that year.  You can get a stamp of completion at the Information Booth in the front of the park, but in spite of our best intentions we just didn’t make it to all 29.  What a great excuse to go back next year!

We went to EPCOT on two days trying to get in more booths, but ended up being so full the second day from our Princess Lunch that we didn’t add any stamps to our passports that day.  On our September (Labor Day Weekend) visit to see Maggie, we all bought tiaras.  Unfortunately, I have simply not had enough opportunities to wear it since coming home.  It made the return trip to WDW with me and EPCOT offered us that Princess opportunity. 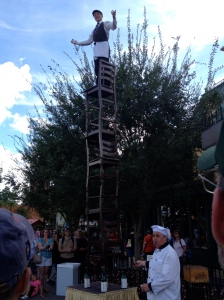 Street entertainers at EPCOT’s France. There was a platform with four bottles and the “waiter” added chair after chair and climbed to the top while his comedic sidekick engaged the crowd.
©Jean Janssen

I had spotted this on our September visit and followed up on Trip Advisor after I got home.  The food at the Norwegian restaurant has always gotten good reviews, but is unusual enough that the restaurant was rarely full.  Disney rescued it by turning the castle-like dining hall into a character buffet with the Disney Princesses.  A tiara-wearing opportunity if I ever saw one!

We made our reservations the day before we went.    A meal with the Princesses in the Fantasyland Castle has to be booked months in advance.  This is a well-kept secret at EPCOT and a wonderful option for people trying to surprise their daughters or princely sons.  The venue stays booked, but you can sometimes snag a table on the day of your visit.  There were diners there just for the food and I enjoyed watching the Princesses approach their tables as much as seeing the character interaction with the children.

The “Princess Family” with Belle at EPCOT’s Norway. (The purple shirts are the specialty Halloween Party tees we bought the night before. Maggie has one too, but elected to wear her Princess Aurora shirt to lunch instead.

When you arrive you have an autograph and photograph opportunity with Belle.  Then you are seated and invited to enjoy the appetizer buffet of salads, cold seafood, cheese, and bread.  (It is actually more substantial than I am making it sound.)  Before we had even finished our salads, the photographer’s assistant came by with our complimentary picture with Belle.  There is a large photograph in a keepsake (cardboard) frame and four smaller ones per family.  Nice for us; we will each get one.  You order your entrée off the menu.  Children eat off the children’s menu at a reduced price.  The adult price is approximately $40.  Not cheap, but it is for the salad bar, entrée, and dessert plus a nonalcoholic beverage.  You will easily spend that much circling the world during the food and wine festival. 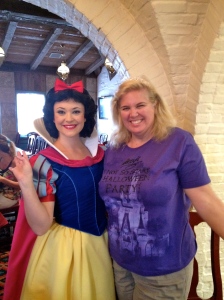 The other four princesses go from room to room greeting each table and taking the time to sign autograph books and take pictures.  We met Aurora, Snow White, Cinderella, and Ariel.  Disney has this down.  They have made sure you had your fix coming in the door meeting Belle.  Then they fill the restaurant room by room so that the princesses reach people who arrived at the same time at the same point.  No one gets overlooked this way. 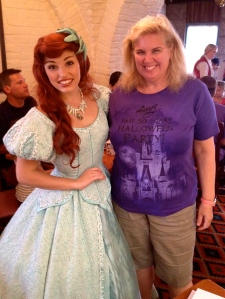 At some point there is a Princess Parade and all the children are invited to follow the Princesses through the castle on parade.  The children loved it, waving to their families and strangers alike as they passed through each room.   One of the cutest families we saw was mom and dad and their young Snow White and her even younger brother.   The little boy was fully decked out complete with boots and a sword and was clearly having as much fun as his sister.

When the parade ended, the Princesses resumed their rounds.  We had a blast.  We made a bathroom stop before leaving the restaurant and that is where Emma heard that we were being referred to as the Princess family since we were all wearing tiaras.  One woman admitted that she had a tiara and wish she had brought hers along.

I am a retired attorney who loves to travel. Several years ago I began working on a Century Club membership achieved by traveling to 100 "foreign" countries. Today, at 49 years of age the count is at 82. Many were visited on land based trips. Some were cruise ports. Some were dive sites. Most have been fascinating.
View all posts by travelbynatasha →
This entry was posted in Disney, domestic travel and tagged EPCOT, EPCOT's International Food and Wine Festival, Walt Disney World. Bookmark the permalink.