A father walking his daughter along Sabang Beach to meet the school bus.
©Jean Janssen

A Jeepney (along with the tricycles) are the most common form of public transportation on land in the Philippines. They originated from the jeeps left behind by the United States at the end of WWII. This one was serving as a school bus. They are often quite colorful works of art.
©Jean Janssen

I am still not adjusted to the time change and having gone to bed at 8:30 pm, I woke up at 4 am.  About six it was light (but too early for breakfast) so I walked down to the beach to see if the tide was in.  There were children and their parents in school uniforms walking down the beach.  After a while I realized that since it was so early they were probably going to catch the bus for school.  At the point where our boat left us off yesterday there is a sort of parking lot.  In the lot are jeepneys(a modified WWII jeep made from stainless steel) that pack them in.  There are even passengers on top.  We saw these all over Manila on our way out of the city.

Headed to the school bus. The children go to school all day long. There long holiday is from March-May (Easter). The next long break is at Christmas time.
©Jean Janssen

I learned later that each of the plaid uniforms is from a different private school (mostly Catholic schools).   The children with the dark pants or skirts and white tops go to the public school.  After watching a while, I saw different patterns at different times reflecting the slightly different schedules and the length of their bus rides.

After breakfast we had our dive orientation and then were divided into groups.  We toured the dive shop-the most efficient and organized I have ever seen-and pulled out our gear.  The Princess Divers-Cheryl, Donna, and Jean will all be diving with Cris as our dive guide and Larry as our boat driver.  They don’t know what they are in for.  We love been taken care of in a sport that is certainly not known for that. 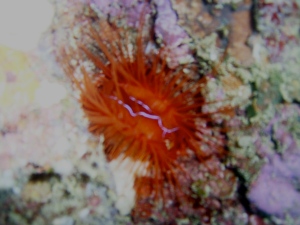 The spark in the center is the electric charge of this clam. Difficult to capture in a picture.
©Jean Janssen

Our first dive was wonderful.  We saw an electric clam that sent out a spark ever few seconds, a yellow-warted frogfish, and a pair of white-eyed eels.  None of these are common.  There are all kinds of nudibranchs, a blue spotted ray, Nemo and his Day on the anemone, a cowfish, and a pair of kissing fish.  The surface was calm and it was a great start to the day.  We are diving off of small johnboats with a seating platform on each side.  We use a backward roll entry, which I don’t think I have done since my training.  Fortunately the boats are so low that we are not going far to hit the surface.

The banded sea krait (black and white sea snake) is from the cobra family and 5 times more poisonous. It will not bother you unless it agitate it. It is usually found on rocks.
@Jean Janssen

We came back for our hour surface interval at the resort and were greeted by warm jam rolls, one of the most caloric and wonderful things I have ever eaten.  Our next dive site had an equally calm surface, but this time with a little current thrown in.  The princesses found a black and white sea snake (which we were later told is five times more poisonous than a cobra),  a basketball sized stone fish (never seen one that large), two mantis shrimp (that look like a lobster tail with legs), and a school of yellow-tail snapper.  We looked for the pigmy seahorse, but with no luck.

seahorse in the sand flats at the Giant Clam dive site. It lowers itself near the sand to protect against the current.
©Jean Janssen

Lunch was back at the resort-meals are included with our package.  Donna was done for the day (still tired from our trip to Siberia and Mongolia) and Cheryl lost track of time, so it was only Cris and I on the third dive.  We went to the Giant Clam dive site and Cris found amazing things-five seahorse, 2 frogfish, a wonderpus, a gobey shrimp, and the largest sea turtle I have ever seen-at least 6 feet long and almost as wide.  Cris got the wonderpus (a small octopus) out and after it got used to me being there, I got to watch as it put each leg back into into its “den”. Fascinating and an opportunity I would not have had with a large group.

The spa at Atlantis, Puerto Galera Philippines which I visited nightly at 8 pm. There are glass walls on three sides, but curtains were drawn for certain treatments. It overlooks the pool and a sundeck is on top of the building.
©Jean Janssen

Dinner was another fabulous meal-beef stroganoff for me.  Not particularly Filipino, but delicious.  Spa treatment for the day was a deep tissue massage, then back to the restaurant for dessert.  Very decadent.  We have a big day tomorrow with a trip out to Punta Verde, so to bed early again.

I am a retired attorney who loves to travel. Several years ago I began working on a Century Club membership achieved by traveling to 100 "foreign" countries. Today, at 49 years of age the count is at 82. Many were visited on land based trips. Some were cruise ports. Some were dive sites. Most have been fascinating.
View all posts by travelbynatasha →
This entry was posted in international, Scuba diving and tagged Puerto Galera. Bookmark the permalink.