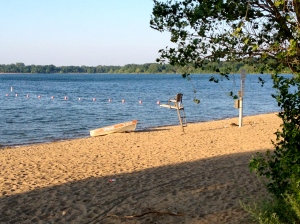 Emma and I drove ourselves out to Lake Calhoun for another morning walk.  I started out in the opposite direction to get a different perspective on the view.  The crowd was a little different, but I am already spotting people I recognize.  Next it was back to the hotel for showers as we have a full day culminating in tonight’s graduation at the Target Center.  (Yes, you guessed it.  They are headquartered here.)

Emma and I took some time to go to the city center of Edina.  We have a favorite shop there, Hot Mama.  I mean really, who can resist a clothing store called Hot Mama.  You feel like you look better already.  The shopping/eating area at 50th and France is very popular.  I recommend the Edina Grill for lunch and just walking around the several streets that make up this area.  There is free public parking in the municipal garages.

spotted in the yard on our arrival
©Jean Janssen

Ivanava prepared a wonderful brunch for us.   We did a lot of hanging out today and then in the afternoon a photographer came over to grab some family pictures.  I thought that was a great idea.  Afterwards, we all headed downtown for the EHS graduation.  Edina High School is one of the top 100 high schools in the country according to Newsweek’s annual report and is ranked #1 in the Midwest.  I am very proud of my nephew, 3Jack3. 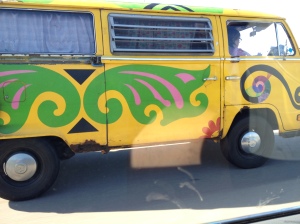 The Target Center is downtown and it seemed everyone was headed in that direction.
©Jean Janssen

Hat toss by EHS Class of 2012. (This is only about half the class, but I was excited I captured it.)
©Jean Janssen

Attending a graduation is a sports arena was a new one for me.  It was the first time I have had the opportunity to order nachos while I watched this type of ceremony.  (I didn’t actually order nachos, but the popcorn smelled so good I was really tempted to get some of that.)  They made great use of the Jumbotron  and if you watched the screen while the speakers presented, it was possible to catch a glimpse of your graduate.   Graduations are always special, but I thought this one particularly nice. 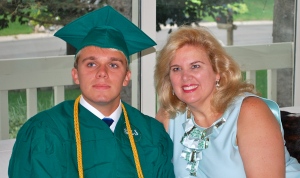 I am a retired attorney who loves to travel. Several years ago I began working on a Century Club membership achieved by traveling to 100 "foreign" countries. Today, at 49 years of age the count is at 82. Many were visited on land based trips. Some were cruise ports. Some were dive sites. Most have been fascinating.
View all posts by travelbynatasha →
This entry was posted in domestic travel, Uncategorized and tagged Edina, Edina Grill, Edina High School, Hot Mama, Lake Calhoun. Bookmark the permalink.