A Graduation in Minnesota

I am in Edina Minnesota (a suburb of Minneapolis) for my nephew’s high school graduation.  We were expecting this really cool weather (at least relative to Houston) and were surprised to wake up on the day of departure and find it was actually 1 degree warmer in Minneapolis.  It was not because it was cooler than usual in Texas.  We had arrived in Minnesota for the heat wave.

This was my first time away from Boris for more than a few hours since his accident last month.  I think we both need the break.  For those of you that don’t follow the blog regularly, Boris was in a serious car accident on Mothers’ Day.  He is non-weight bearing on one leg and has an external fixator.  He also has a cast on the hand he writes with.  His mobility and dexterity are extremely limited.  While I am away, he has 3-4 people stopping by each day to check on him.

I captured this shot of downtown Minneapolis from the walking trail around Lake Calhoun. The ducks were enjoying a swim.
©Jean Janssen

I have actually visited here more in the winter (or at least in temperatures that felt like it was winter) to enjoy the snow which we don’t get in Houston.  Minneapolis truly is the city of 10,000 lakes.  During the holiday season, there is perhaps nothing more beautiful than the frozen lake and the houses decorated with lights and other seasonal adornments.

I really didn’t know much about this area of the country before my brother moved here with his family.  There are so many companies headquartered here which always surprised me given the extreme winter temperatures. (I grew up convinced that Dairy Queen was a small town Texas-based business.  Wrong.  The company is headquartered in Edina.)  My theory is that, other than the obvious financial incentives these cities must offer companies, they are hoping their employees will be of the mind set that if it is too cold to go outside anyway they might as well just stay in and work. 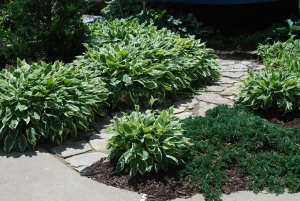 hostas in their back yard
©Jean Janssen

I like all the green space you see when traveling on the freeways, even in the city.  At home it is businesses, billboards, and strip malls.  The days cool down in the evening so that even if the day is hot, the evening will be pleasant.  They can also have some wonderful plants-like the hostas at my brother’s home- that our tropical gulf coast climate will not permit.

Not weather I am prepared to handle

When you visit as different part of the country you realize people deal with different issues.  Our biggest worry is a hurricane, but I am used to the preparations you have to make for that.  I am not sure I could deal with the extreme weather conditions in Minnesota.  Each year, my brother has to have his pool drained and  an alcohol-based chemical run through the water lines to prevent broken pipes due to the  freezing temperatures.  At home it is dangerous for us to let the pool go dry.  We just circulate water through the lines when the temperature gets near freezing.  His family recently had to deal with another “nature issue”.  Their home was attacked by woodpeckers and they had to replace all the outside siding.  They have looked at the situation as an opportunity and my sister-in-law has done a wonderful job updating their home both inside and out.

Creme Fresh when she arrived in Minnesota
©Jean Janssen

This was just arrival day, so our activity was limited.  We enjoyed the entertainment offered by the two newest members of the family.  My sister-in-law, Ivanova, has always liked French Bulldogs.  They adopted their first, Creme Fresh, a fawn-colored female from a rescue organization.  She had been at a “puppy mill” and is enjoying a well-deserved retirement.  I met her first when she had been here only two months; she has now been with the family for a year and a half and she looks so much younger and healthier.   She also has a sister now, Coco Vel-vet, a chocolate brindle french bulldog who was also rescued from a puppy mill. 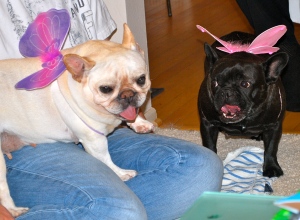 Looking forward to our morning walk around one of the lakes…

I am a retired attorney who loves to travel. Several years ago I began working on a Century Club membership achieved by traveling to 100 "foreign" countries. Today, at 49 years of age the count is at 82. Many were visited on land based trips. Some were cruise ports. Some were dive sites. Most have been fascinating.
View all posts by travelbynatasha →
This entry was posted in domestic travel. Bookmark the permalink.

1 Response to A Graduation in Minnesota